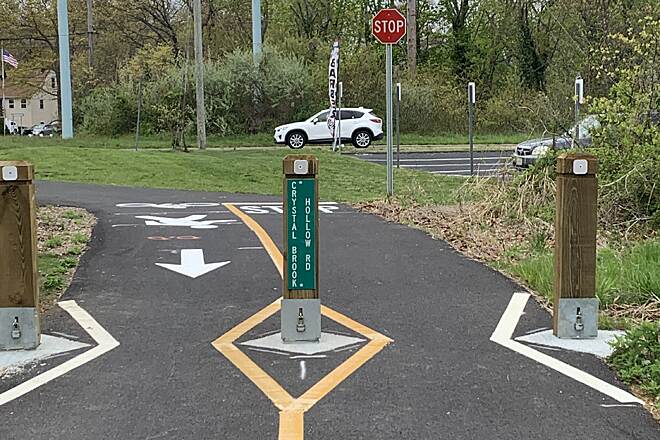 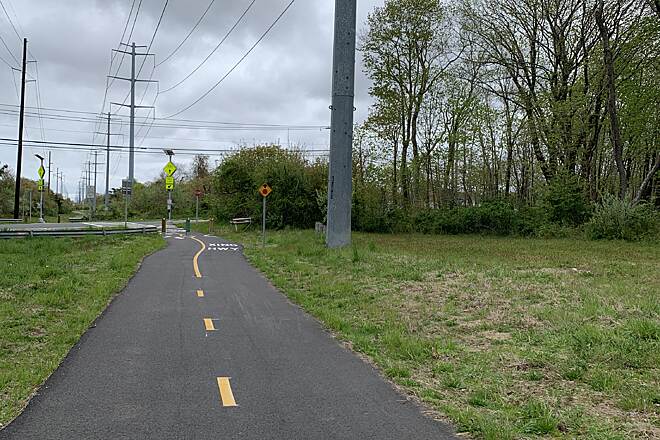 The North Shore Rail Trail, formerly known as the Rails to Trails Recreational Path, is a 10-mile multi-use recreational path and runs along the former Wading River railway corridor in Brookhaven—the largest town in Suffolk County, NY. A branch of the Long Island Rail Road, the Wading River railway line was used by Nicola Tesla to commute to his Long Island laboratory. The railway line was abandoned in 1939 and the idea of turning it into a rail-trail was first introduced in the 1970s. Over fifty years later the North Shore Rail Trail, Long Island's first rail-trail, opened to the public in June 2022.

From its eastern endpoint on Wading River Manor Rd, the trail runs west from the hamlet of Wading River to the border between the hamlets of Mount Sinai and Port Jefferson Station. Paralleling NYS Rt. 25A, the North Shore Rail Trail connects local recreational areas, schools, businesses, residential areas and athletic fields. There are trail kiosks at both endpoints and quarter-mile markers along the route. Whether commuting, exercising or just enjoying some recreation, this trail provides a safer alternative for residents to walk, run and bike.

The North Shore Rail Trail is part of Suffolk’s county-wide Hike and Bike Master Plan, whose goal is to create a connected network of trails and fill in existing gaps. Part of this plan includes adding a 175-mile extension (from Battery Park to Montauk) to New York's Empire State Trail, which currently skips Long Island in its cross-crossing of the state.

This ADA compliant trail is 30ft wide with a 10ft paved section down the middle and an additional 10ft on either side, making it quite accessible for those using mobility aids or for families with strollers.

Open from dawn to dusk only, the trail has no lights, benches, garbage cans, water fountains, or restrooms. This is necessitated by its status as an active Long Island Power Authority (LIPA) right-of-way, which means that the LIPA can use the path to access their electric system should the need arise.

Dogs are allowed to be walked on leashes and must be picked up after. This is a carry in/carry out trail—all animal waste and garbage must be disposed of offsite.

Whether you are going for a long bike-ride, switching up your commute, or just popping over to a friend's house, the North Shore Rail Trail is the perfect opportunity to do it all while enjoying some time in nature.

There are no designated parking areas as this trail crosses residential streets, but there are commercial areas with parking lots that may be useful, street parking at most cross streets, and the town community center, The Rose Caracappa Center (739 Route 25A Mt. Sinai, NY), which offers direct access to the trail.

In Mt. Sinai, access the trail from Crystal Brook Hollow Rd, just off Hallock Ave (25A).

In Wading River, access the trail on Wading River Manor Rd, between where it intersects with Charles St and Benjamin St.

Yes the path is new, surrounded by greenery and tuck back from the main road. My biggest complaint is the amount of crossroads at the beginning in smith town. Too much interruptions AND You really need to be careful even when you hit the rider alert button for crosswalks The ride itself is nice, but no facilities on path.

Paved trail, it’s clean, 10+ miles long. Well maintained. Great views and you may see turkeys, deer and ground hogs/ gofer not sure what they were. There are bugs out that will hit you in the face and stick to your body will riding

Very nice fully paved trail. Saw some gophers and deer along the way. Maybe an eagle too but not sure. Might have been a hawk or a vulture. Parked at senior center as recommended in the trail information section.