Photographer F.J. Bandholtz captured this panoramic view of the Iowa Soldiers’ Home around 1907. The campus was verdant and lush with trees, which obscure all but the buildings’ rooflines in the photograph.

Photo by: F.J. Bandholtz | courtesy of Library of Congress

Opened in 1887, the Iowa Veterans Home in Marshalltown, Iowa, has provided housing and health care to veterans of the U.S. armed services for over 130 years. Today you can visit the campus and see some of the historic buildings that were constructed when it was known as the Iowa Soldiers’ Home (ISH). Because it’s an active facility, we recommend you focus your visit on the cemetery grounds that are on the property, which are open to the public from dawn to dusk. As you head up Memorial Drive, there’s a small road that intersects on the left and takes you toward the gravesites. At the fork, bear right and head uphill until you reach the spot where you’ll see a flagpole, pulpit and two memorials. Carved into the stone of the memorial in the middle is an inscription:

These few words are threads we can pull to learn more about the history of this place: why a residence for veterans was established in the late 19th century; who helped establish and sustain the home; and who lived here and why.

“The Memory of the Unknown”

Approximately 3.5 million soldiers—from the Union and Confederacy—fought in the U.S. Civil War between 1861 and 1865. While the monument was dedicated to the thousands of anonymously buried “unknown soldiers” who were among the 750,000 casualties of the conflict, there were also hundreds of thousands of men who survived the Civil War with disabilities. [1] About 45,000 lost limbs, but many more experienced pain or impairment as a result of gunshot and shell wounds, or diseases incurred during war. [2] “Although relatively few men were wholly disabled,” historian James Marten found in his study of Gilded Age veterans, Sing Not War, “increasing numbers came to believe that the war had contributed to minor or even major physical [disabilities], and by the end of the century, sympathetic observers estimated that hundreds of thousands of men had eventually lost their vigor as a result of vague wartime maladies and that the life expectancies of tens of thousands had been reduced by a decade or more.” [3] Many veterans sustained injuries during the war, and this population increased as the cohort of Civil War veterans aged and disabilities intensified over time. Across the United States, a need grew for facilities to house and care for a segment of the veteran population who had disabilities and needed extra support. The federal government opened branches of the National Home for Disabled Volunteer Soldiers—including in Dayton, Ohio, and Marion, Indiana, which are also along the route of the Great American Rail-Trail™—but state governments also opened and operated their own homes, often because of pressure from the GAR, the Grand Army of the Republic, a fraternal organization of Union veterans.

“Ladies of the GAR”

Winchester Circle No. 60 was the women’s auxiliary of Marshalltown’s chapter of the Grand Army of the Republic. The GAR was founded in Decatur, Illinois, in 1866 and was just one of a number of societies that veterans of the Union Army created for support and companionship during the difficult transition back to civilian life. The organization hit its stride in the 1880s. Over the course of that decade, approximately 400,000 former Union soldiers established or joined one of 7,000 local GAR posts across the United States. The GAR was limited to men, but many posts also had auxiliary groups for wives or children of veterans. The Ladies of the GAR was for women related to veterans by blood or marriage, and the Women’s Relief Corps (WRC) was open to all women. The GAR members planned social activities and civic memorial events, but also engaged in politics—particularly rallying support for the Republican party—and lobbying federal and state governments for pensions and benefits for veterans. The Ladies of the GAR and WRC primarily devoted themselves to providing care and assistance to veterans, and to commemorating the war and Union victory. [4]

The Iowa Soldiers’ Home was established in 1886, at a moment when state politics and veterans’ needs intersected. “By pushing through a state soldiers’ home, the Iowa GAR could aid its … comrades while shoring up veteran support for the state Republican Party,” historian Brian Edward Donovan noted in a 2012 article about the ISH. The Iowa General Assembly appropriated $100,000 to buy a site and maintain the home for one year, and citizens of Marshalltown raised another $30,000—a gesture that helped them outcompete the 75 other counties vying to be chosen as the site for the ISH. The ISH opened in December 1887 with seven residents, and within a month that number grew to 66. [5] In the ensuing years, the ISH would admit women (wives or widows of veterans) and Black veterans. “The GAR encompassed white and [B]lack comrades who valued the part they played in striking down American slavery,” historian Jonathan Neu found in his study of the organization during the Progressive Era, and "they encouraged younger generations to remember this legacy.” [6]

This 1921 fire insurance map of Marshalltown, made by the Sanborn Map Company, shows the campus of the Iowa Soldiers’ Home and its many buildings. 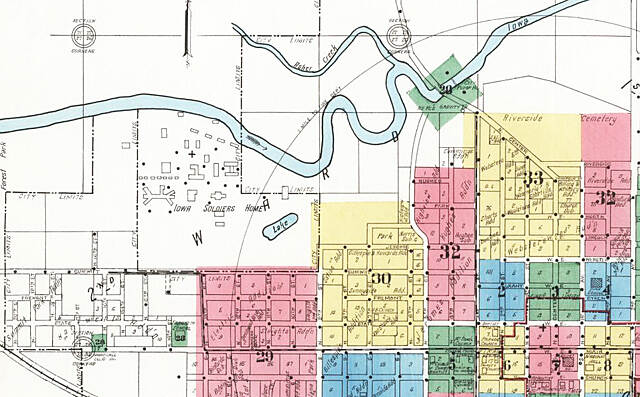 Map by: Sanborn Map Company | courtesy of Library of Congress

“Defenders of Our Flag”

By the early 20th century, the U.S. government had spent $1 billion in taxpayer money on pensions to Civil War veterans. Between 1862 and 1890, these pensions were exclusively for widows and minor children of soldiers killed in action and for veterans unable to work because of conditions resulting from the war—and in 1890, new legislation allowed veterans with disabilities to draw a pension on the basis of their service, regardless of whether their disability originated in the war. [7] Veterans received compensation based on the extent of their disability. [8]

While veterans and groups like the GAR vigorously supported veteran-friendly policies such as pensions and soldiers’ homes, the public wavered between patriotic support for former soldiers and suspicion that the pension system was rife with fraud, paying out taxpayer dollars to men they believed could support themselves. [9] ”The emerging meaning of disability after the Civil War was contested terrain—an evolving social construct articulated in the press and in local communities through a myriad of encounters among pension claimants, examining surgeons, pension lawyers, and G.A.R. period politicians,” argues law professor and disability law expert Peter Blanck. [10] Veterans found that regardless of their condition, they were only considered to have a disability if they could get a physician to accept and certify it. [11]

So, to remind the tourists who flocked to the ISH and other veterans’ homes of their sacrifices, the veterans at ISH donned uniforms and marched in formation. [12] The ISH residents did not relish these performances. "The fact that they were not the conquering army of their youth … added an element of farce to the proceedings that the veterans deeply resented.” [13]

Despite constantly having to justify their pensions, veterans had power and control; they made decisions about when, where, and how their needs would be best served. While some men lived at the ISH for years, grateful for the medical care available at the campus’s hospital—added in 1890—and opportunities to earn a small income from their assigned work details, others would come and go from the ISH. They entered when they couldn’t find work or needed medical care, and left when new opportunities presented themselves—or they got fed up with the performances, overcrowding or company of their fellow veterans. Some bounced around among the various soldiers’ homes throughout the country, in search of better conditions or just to hang out with new people. And always, veterans knew that their votes mattered to political parties—and so long as they could swing elections, they could pressure politicians to hear their concerns and support the needs of people with disabilities. [14]

By 1909, when the Winchester Circle No. 60 of the Ladies of the GAR erected this monument, the ISH and its peer institutions were primarily functioning like modern-day nursing homes. [15] By the turn of the century, many of the veterans of the Civil War were in their 50s and 60s. They remained active in civic life, especially with the GAR. Studying the activities of local chapters at the end of the late 19th and beginning of the 20th century, Neu found, “Many veterans viewed the GAR as uniquely qualified to combine community activism with patriotic culture—a vision that comprised exaltation of a strong, national Union (which they felt they had saved).” [16] Fundraising for this monument, for example, was a way for Winchester Circle No. 60 to come together and raise funds for a patriotic cause, strengthening their bonds to one another and among the auxiliary, GAR post, ISH and state of Iowa. On Memorial Day, 1909, members of Winchester Circle No. 60 presented the monument to Judge G.S. Robinson, a representative of the state of Iowa, at a well-attended ceremony in the cemetery. Then a salute was fired, taps sounded, and the ceremony ended. [17]

The ISH continued to grow over the years. Cottages where spouses could live together were added in 1892, and in 1896, construction began on the Old People’s Building—which still exists, but as Heinz Hall. Expansion continued in the 20th century, with four buildings added between the 1950s and 1980s. Today, the Iowa Veterans Home is one of the largest state veterans’ homes in the U.S., providing services to over 550 Iowa veterans at a time. [18]

The cemetery is as much a part of the Iowa Veterans Home campus as the residence and medical facilities. As you walk among the headstones, you will spot birth and death dates from the 19th through to the 21st centuries; some of the oldest also include the military unit the deceased served with during the Civil War. Not all the people interred here are veterans—veterans’ families could be buried together, for example—but among the buried are some of the United States’ earliest advocates for people with disabilities. They used their voices and votes to gain recognition by their communities and support from state and federal government, and paved the way for the disability rights movement of the future. 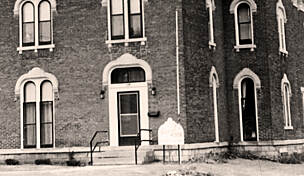 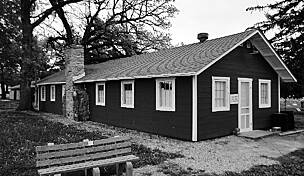 Located at the Hardin County Fairgrounds in Eldora, Iowa, the Civilian Conservation Corps/Prisoner of War Recreational Hall was constructed in 1933 by... 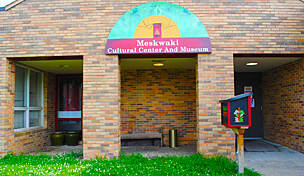 Learn the history of the Meskwaki Nation at the tribe's cultural center and museum in Tama, Iowa, where you can view artifacts like arrowheads,...