Pittsburgh's Union Station and the Great Strike of 1877

The most striking architectural feature of Burnham’s Union Station is the domed entryway to the building.

Photo by: Carol M. Highsmith | courtesy of Library of Congress

Today, you can still catch a train from Pittsburgh’s Union Station, though most of the building is now luxury rental apartments. But this beautiful building is not the original train depot that the Pennsylvania Railroad built to serve Pittsburgh. In 1877, after railroad workers around the country went on strike to protest wage cuts and layoffs, a riot broke out in Pittsburgh and sympathizers burned down the station and destroyed locomotives and railroad tracks. [1]

What made people so angry that they would set fire to a train station?

A simple, specific answer is pay cuts. The Baltimore and Ohio (B&O) Railroad reduced its employees’ pay in early July 1877, a few months after the Pennsylvania Railroad cut wages and began reducing the number of engineers and brakemen per train. To railroad workers, this felt like insult to injury; the country had endured an economic recession for four years, and unemployment was high. A more complex cause for worker frustration, however, can be attributed to the rapid industrialization that—since the end of the Civil War in 1865—had seen Americans increasingly forced away from farming and into low-wage jobs for large companies popping up across the country. As the industrial age boomed and brought unprecedented wealth to a new class of entrepreneurs and businessmen, working-class Americans struggled with inconsistent employment, meager pay and exposure to dangerous machinery. For many Americans, the railroads represented the most visible example of these changes. [2]

On July 16th, B&O workers walked off the job in Baltimore, Maryland, and Martinsburg, West Virginia, lighting a fuse that ran west along the tracks. [3] Pennsylvania Railroad workers in Pittsburgh joined the work stoppage on July 19. The Pittsburgh Daily Post reported the next day that "the brakemen and flagmen of the Western Division abandoned their posts and thus far the company has not been able to run through the heavy freight traffic which has accumulated from the west.” When the assistant superintendent of the Western Division found some workers to replace them, “a little riot” erupted and the superintendent “was struck in the face by one of the rioters.” [4]

With 2,000 freight cars idle in the city, Pittsburgh decided to call in state militia troops from Philadelphia to quell the strike—reasoning that the Pittsburgh militia would be unwilling to battle with their friends and neighbors. The Philadelphia troops had no such qualms, and on June 21 they faced off with the strikers. [5]

By then, the crowd at Liberty Avenue and 28th Street was made up of more non-railroad workers than employees of the Pennsylvania Railroad. In the railroad workers’ plight, many recognized their own mistreatment at the hands of employers. As the Philadelphia troops attempted to clear the tracks that evening, a riot began. A group of local boys began throwing stones at the militia, provoking one of them to shoot his musket in the air. Believing this was a command to shoot, his fellow soldiers began to fire into the crowd. [6] The crowd dispersed, but the troops’ actions had stoked their anger.

Over the next 24 hours, the crowd set fire to railroad cars, downtown buildings, a grain elevator, and the railroad roundhouse and Union Depot. The destruction to Pennsylvania Railroad property was near total. [7] The Daily Post reported that "such a pile of debris has never been seen hereabouts. Nothing but the bare walls are left of the burnt buildings, and the old iron which went to make up the cars is piled up in heaps just as it dropped during the blaze.” [8] Property was not the only casualty of the riot; 20 civilians and 4 soldiers died during the uprising. [9]

While the strike died down in Pittsburgh, the “Great Upheaval” spread across the country. [10] In Pennsylvania, there were also strikes in Altoona, Lebanon, Harrisburg and Reading. [11] Workers in large railroad cities like Chicago and St. Louis shut down the rails and held massive protests. [12]

In so many of these areas, local and state militiamen sympathized with the strikers and forced governors to call on President Rutherford Hayes to send in federal troops. By August, the uprisings had died down, some quelled by the army and others simply fizzling—the anger that made them combust had run its course. [13]

Ultimately, the strikers won the attention of the railroads, industrialists and the government, but failed to reverse the cuts to wages and jobs. By banding together, however, they gained an understanding of the greater solidarity and planning needed to win in the future. After 1877, workers would organize with vigor, birthing the modern labor movement. [14]

Turn-of-the-century travelers walk to and from the magnificently rebuilt Union Station. 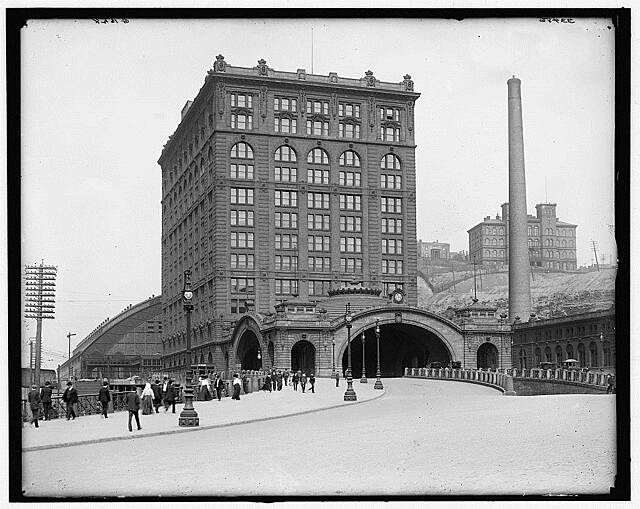 Photo by:  Detroit Publishing Co. | courtesy of Library of Congress

In Pittsburgh, the city began to rebuild. The Pennsylvania Railroad quickly built a temporary depot, which sufficed for the next two decades, and in 1898, the railroad hired nationally renowned architect Daniel Burnham to construct an impressive new station. [15] More than 100 years later, the twelve stories of brick and terra cotta and magnificent domed rotunda still feel glamorous. Standing beneath the skylight at the center of the rotunda, it’s easy to imagine Victorian-era travelers wheeling their trunks toward the train platforms, eager to embark on their destinations. Today, passenger trains depart just once a day, with most of the pedestrians crossing the rotunda headed to or from the adjacent busway. But though travel modes have changed, the station remains as a grand historical marker for the city, imparting a bit of elegance on people’s daily commutes. 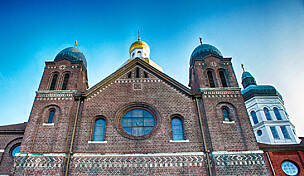 In the early 19th century, glass- and ironworks began opening along the banks of the Monongahela River on Pittsburgh’s South Side. By the end of the... 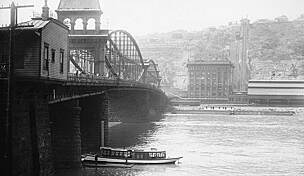 Constructed in 1898 as the passenger depot for the Pittsburgh & Lake Erie Railroad, today this historical Classical Revival building anchors the... 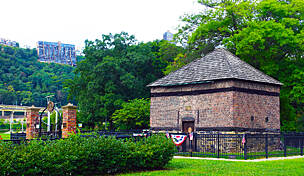 Fort Pitt and Fort Duquesne were essential to both the French and English militaries during the French and Indian War. Situated where the Allegheny...