Evelyn Williamson attended Seattle’s Garfield High School in the 1920s, alongside fellow jazz singer Evelyn Bundy. Williamson's brother-in-law, “Noodles” Smith, paid for her voice lessons and booked her to sing in his clubs. She had a decades-spanning career, including this performance with Lionel Hampton’s band at Seattle’s Trianon Ballroom in December, 1940.

When federal Prohibition agents burst into the Chinese Garden at midnight on March 22, 1931, the restaurant/nightclub was filled with several hundred diners, drinkers, musicians, dancers and gamblers, as it was on most Saturday nights. [1] Owned by Charlie Louie, a Chinese businessman and local fixture in Seattle, the Chinese Garden was a popular spot for Seattle’s hip crowd. When it opened at the corner of Seventh Avenue and King Street in December 1929, Louie told The Seattle Daily Times that, after 26 years, “My long experience gained in catering to Seattle people enables me to know what they enjoy, and my new cafe will represent the utmost in entertainment possibilities.” [2] Patrons dressed up for a night at Louie’s club, with women donning gowns and men in jackets and ties. [3] They came to listen and dance to live performances by the best jazz outfits in town, sip on drinks made illegal by Prohibition, take a chance at the gambling tables, and see and be seen by friends and rivals alike. The crowd reflected the surrounding South Seattle neighborhood—and patrons hailed from a variety of racial and ethnic backgrounds. Some were born in Seattle, and others came from elsewhere in the United States or from abroad; some were local residents, while others just passed through. Though the federal agents made some arrests that night, it did not take long before musicians picked up their instruments and couples hit the dance floor once again at the Chinese Garden.

New Yorkers who wanted to see live jazz in the 1920s and ’30s went to Harlem. In Seattle, they came to the South Seattle neighborhood around Jackson Street. The city’s Japanese, Chinese, Filipino and Black communities shared this area, now known as the International District. Housing discrimination in the city, particularly in the form of racially restrictive covenants, prevented non-white renters or homebuyers from occupying homes in certain neighborhoods, and so the Black, Asian, and Jewish communities—the latter of whom were often excluded by covenants as well—concentrated in the Jackson Street area. Foreign wars, national immigration laws and local racial violence caused the size of each of these communities to grow and ebb between the 1860s and the 1940s. In 1935, 68% of the area’s residents were Asian, 24% were Black, and 8% were white. [4]

While studying the neighborhood for her book on Japanese Americans in early 20th century Seattle, historian Shelley Sang-Hee Lee found a newspaper column that ran regularly in Seattle’s Japanese-American Courier in the 1920s and 1930s, written by Kinue Okamura and an author known as “The Wag,” who “provided a glimpse of the multiplicity of cultures and ethnicities in the relatively small space of Jackson Street.” In one week’s column, Okamura and “The Wag” poetically captured a moment of the jazz scene: “A wild southern symphony combined with the tenor of a [Black] jazz singer emanates from a tea shop below the Kin Ka Low Restaurant. A bit of Southern philosophy mixed in with that of the [East].” [5]

Seattle became known for small combo swing bands, since the city lacked the musicians and lucrative venues required for the large swing orchestras that dominated at the time. The performers and clubs that thrived were largely attributable to the investment and nurturing of E. Russell “Noodles” Smith, the godfather of the city’s jazz scene. In 1920 he opened the Entertainers Club, and throughout the 1920s and 1930s he owned or had stakes in many other venues, including the Alhambra, Black and Tan, Hill Top Tavern, and Ubangi clubs. Although he booked touring celebrities like Jelly Roll Morton, Cab Calloway and Duke Ellington, his clubs also regularly featured shows by local talent. [6]

The jazz scene that Smith created made it possible for Seattle-bred performers to launch national careers and influence the evolution of the genre. For example, Smith brought bandleader Les Hite from Los Angeles to play the inaugural show for the Ubangi Club. Local singer Evelyn Williamson met her first and second husbands, saxophonists Bumps Myers and Marshal Royal, when they came to Seattle with Hite’s band, and in 1938 she moved to Los Angeles with Royal. Seattle’s Floyd Turnham Jr. (sax), Joe Bailey (bass and tuba), Gerald Wiggins (piano) and Phil Moore (piano) all eventually left town with Hite’s band, while Earl Whaley took pianist Palmer Johnson and saxophonist Wayne Adams with him on a musical tour of China in 1934. “Talented musicians came and went,” according to Seattle jazz expert Paul de Barros, with performers leaving nationally touring bands and making way for local musicians to join up. “This constant interchange between local and national scenes was the underground interstate highway system on which the jazz tradition traveled.” [7]

All this talent had to stay, eat and socialize somewhere. Racial discrimination was technically illegal in Seattle, but Black performers found it the de facto practice. Hotels, restaurants, and clubs owned by Black, Chinese, Japanese, and Filipino proprietors served the Black community of jazz performers. Smith owned the Golden West and Coast hotels, but musicians needing a temporary home often rented rooms by the week at one of the numerous Asian-owned hotels around Jackson Street. [8] According to historian Quintard Taylor, Black customers “who believed their patronage was not welcomed by white establishments were eagerly courted by Asian entrepreneurs.” [9] The Tokiwa Hotel was just a block west of the Chinese Garden, at Maynard Avenue and King Street, and for one or two dollars a week, musicians could rent a room to sleep off their late nights, and enjoy food at affordable prices at many of the local Japanese and Chinese restaurants. [10]

While Prohibition ended in 1933, and the Chinese Garden closed in the 1950s, the diversity of Jackson Street and Seattle’s jazz scene endured. From the foundation laid by the excellent performers and club owners of the Prohibition years, world-famous talents like Ernestine Anderson and Quincy Jones emerged during the swing and bebop years of the 1940s and 1950s.

By 1960, when photographer Werner Lenggenhagger took this picture, the Tokiwa Hotel had become the Evergreen Hotel. The fading advertisement for the Tokiwa, on the side of a building at Maynard Avenue and Jackson Street, may have reminded neighborhood old-timers of jazz’s heyday. 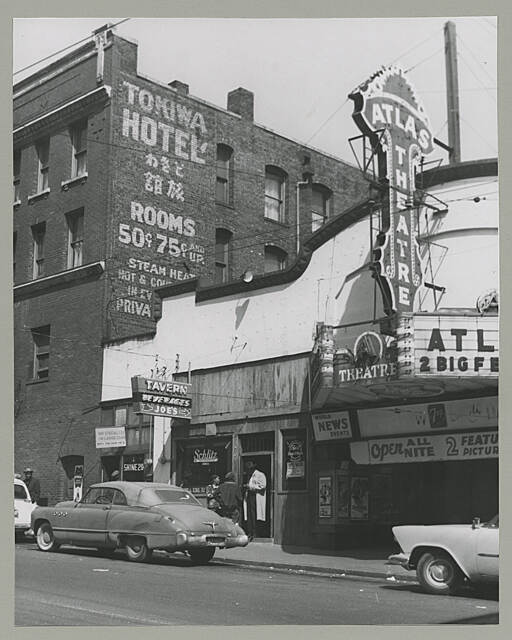 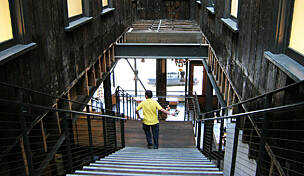 In the heart of Seattle’s Chinatown-International District, the Wing Luke Museum of the Asian Pacific American (APA) Experience has centered APA... 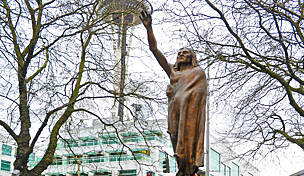 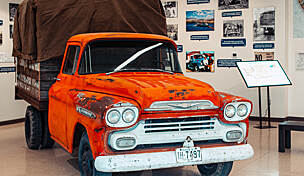 Located in South Park in Seattle, Washington, the Sea Mar Museum aims to celebrate the rich culture of our country’s Mexican American community,...