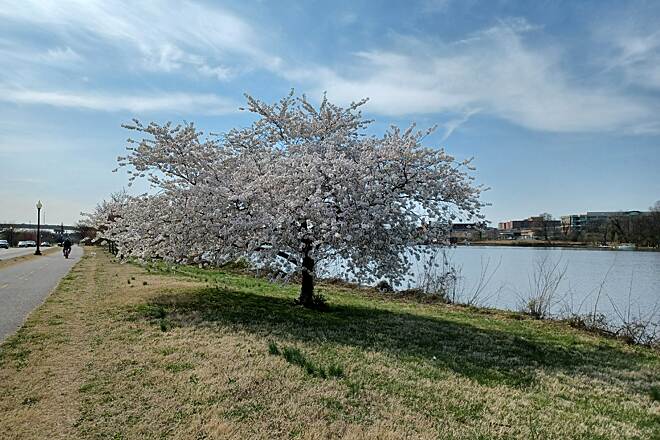 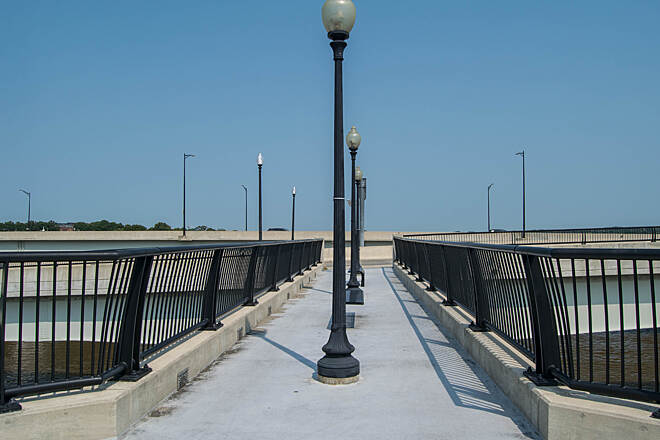 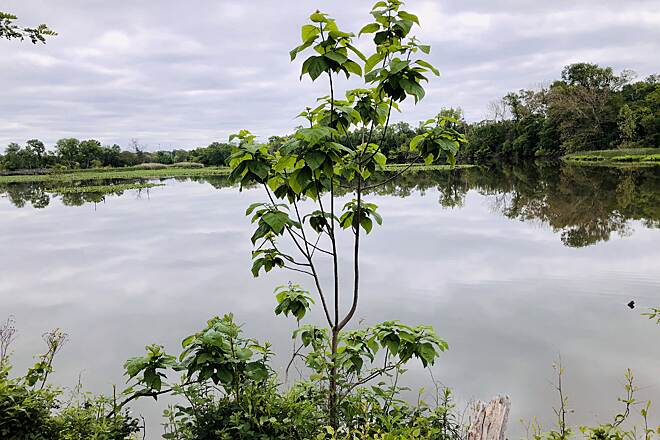 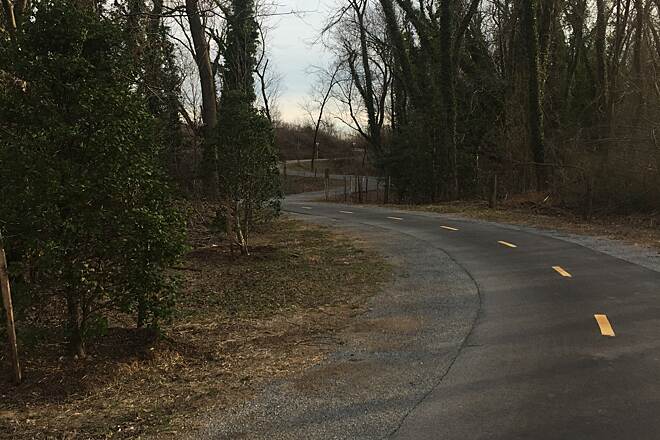 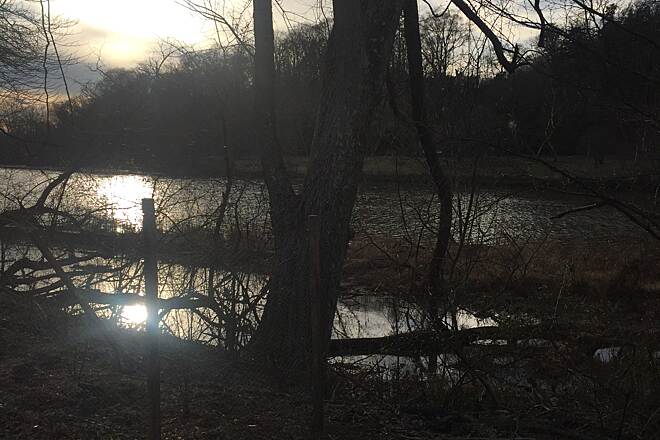 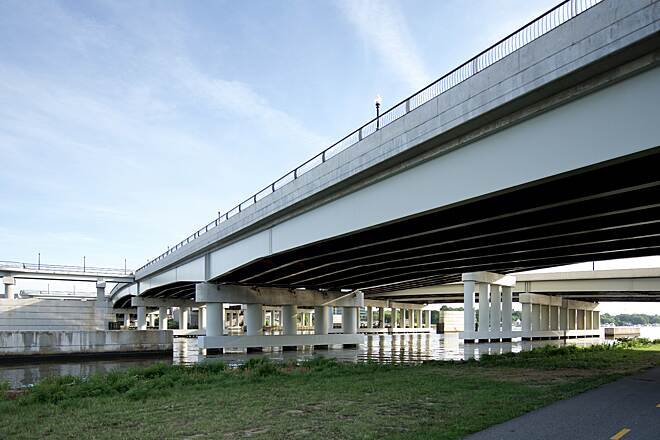 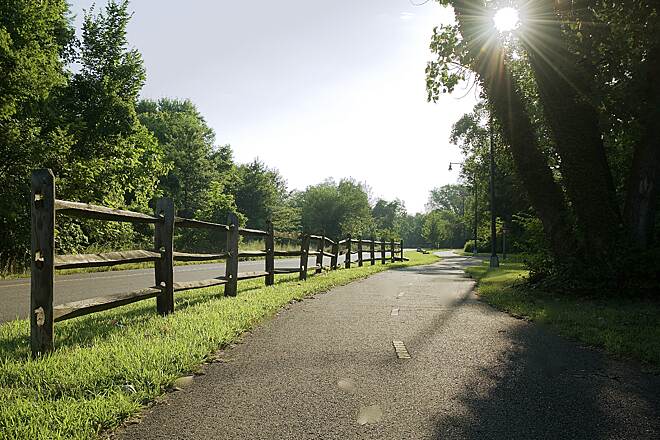 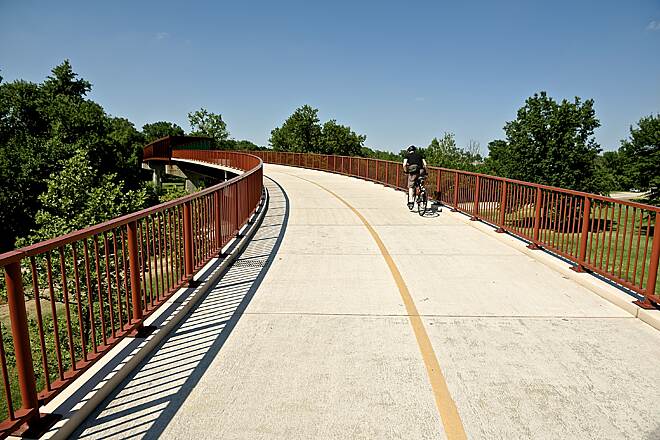 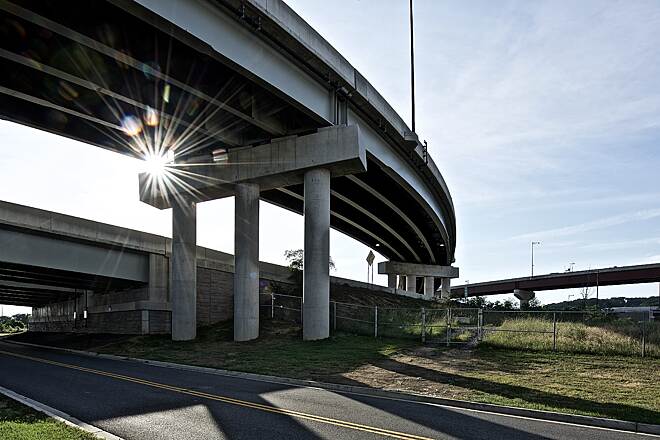 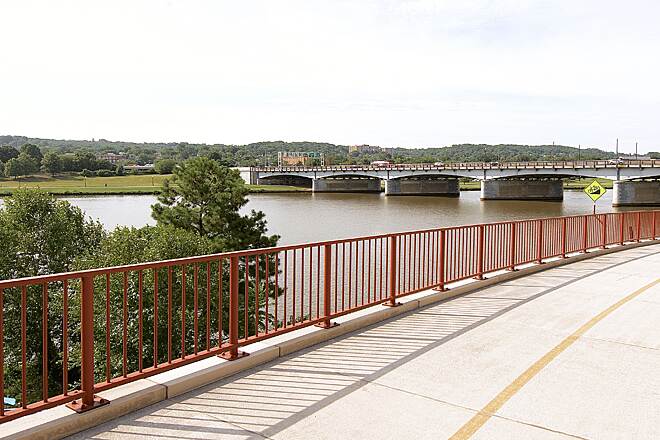 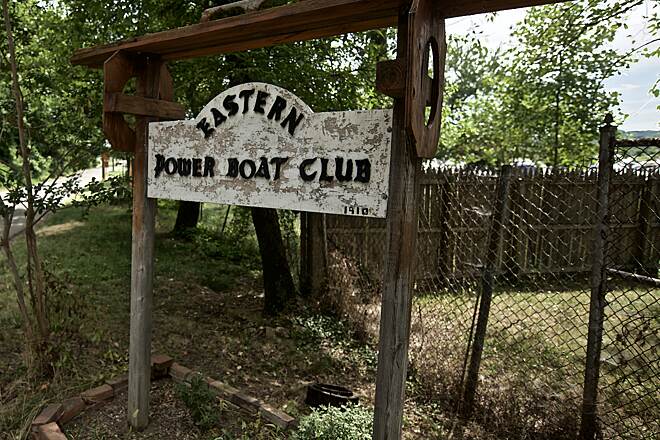 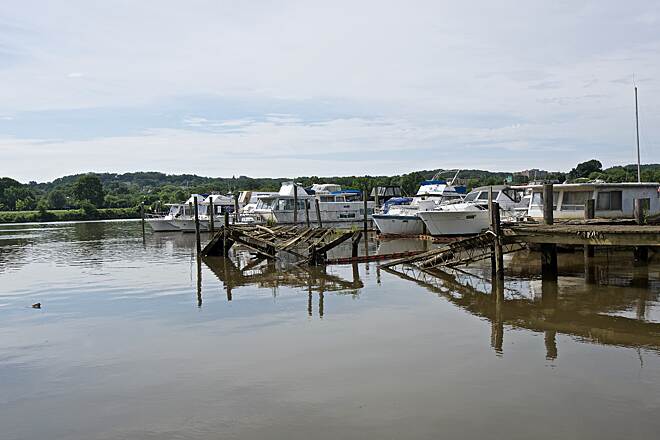 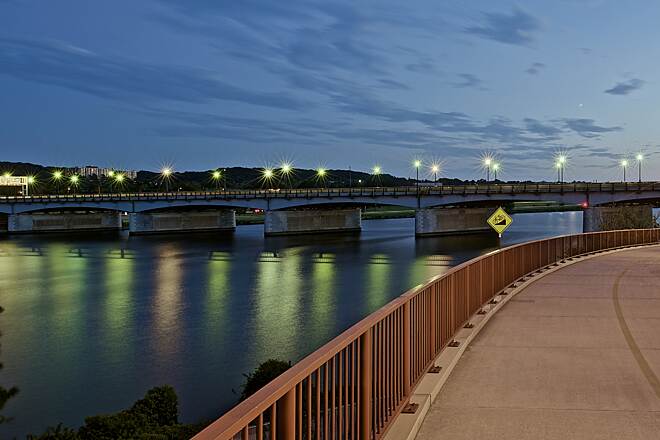 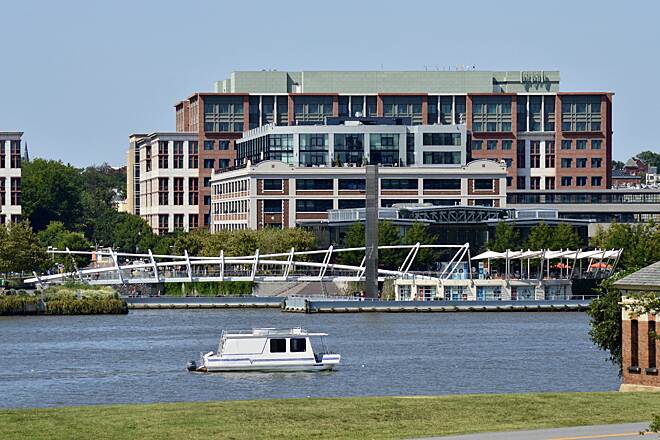 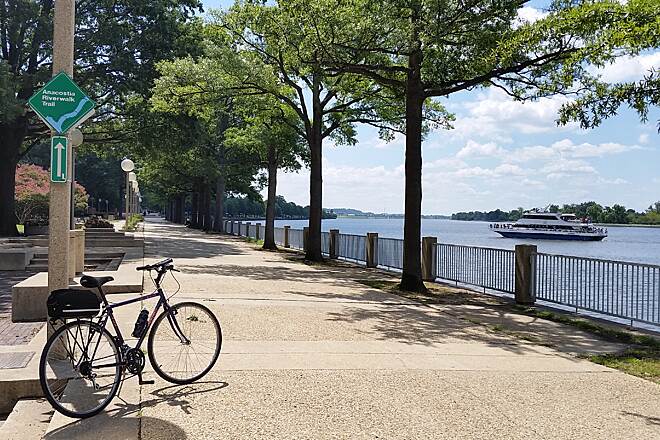 The Anacostia River Trail, sometimes referred to as the Anacostia Riverwalk Trail, is an important component of the Capital Trails Coalition's plan to create an 800-mile network of multiuse trails that are equitably distributed throughout Maryland, Washington, D.C. and Virginia. The planned 28-mile trail, spanning both sides of the Anacostia River, connects DC and Maryland residents in 16 waterfront neighborhoods to their workplaces, schools, shopping, recreational amenities and the outdoors. Its surface is primarily asphalt with some sections of concrete, boardwalk and crushed stone.

Currently, 20 miles of the trail have been completed, providing access to Diamond Teague Park, the historic Navy Yard, RFK Stadium, and Anacostia Park. The trail's most recent section, through the beautiful Kenilworth Aquatic Gardens, was completed in 2016 and connects to the Maryland segment of the trail. That segment continues north to Bladensburg, Maryland, at the split of the Anacostia River into its northeast and northwest branches. Those traveling on either the Northeast Branch Trail or Northwest Branch Trail can seamlessly join the Anacostia River Trail. All three trails—along with several others—are part of the larger Anacostia Tributary Trail System.

Once fully completed, the trail will also connect to the Tidal Basin (famous for its cherry blossoms in the spring), the National Arboretum, and the National Mall (gateway to the US Capitol, Smithsonian museums, the Washington Monument and other iconic landmarks).

One cautionary note: For the time being, the portion of the trail that goes from the Navy Yard to 11th Street SE will only be open during business hours (8 a.m. to 5 p.m. Monday through Friday).

The region’s Metro rail service provides convenient access the trail; if taking your bike aboard a train, please observe the transit system’s rules. Several train stops are relatively close to the trail, including: the Navy Yard-Ballpark (200 M St. SE) and Anacostia (1101 Howard Road SE) stations on the Green Line, and the Potomac Avenue (700 14th St. SE) and Stadium-Armory (192 19th St. SE) stations on the Orange, Blue and Silver Lines. Near the Kenilworth Aquatic Gardens and the D.C./Maryland border, the Minnesota Avenue (4000 Minnesota Ave. NE) and Deanwood (4720 Minnesota Ave. NE) stations on the Orange Line are the closet Metro stops to the northern end of the trail.

For those who are arriving by car in Washington, D.C., paid parking lots can be found near the southern end of the trail around Yards Park (10 Water St. SE) and Nationals Park (1500 South Capitol St. SE). Public parking is also available in Anacostia Park (1900 Anacostia Dr. SE) and Kenilworth Aquatic Gardens (1550 Anacostia Ave. NE).

On the northern end of the trail in Maryland, parking can be found at Colmar Manor Community Park (3510 37th Ave., Colmar Manor) and Bladensburg Waterfront Park (4601 Annapolis Road, Bladensburg).

Starting at Nats Park (home of the Washington Nationals), we crossed the South Capitol Street bridge via a single-lane sidewalk with high railings on both sides. (This has now been replaced by a brand spanking new bridge with white arches that can be seen throughout the city.) On the southwest side of the Anacostia River, we encountered a surprisingly pastoral riverside trail that winds past playgrounds, basketball courts and a large outdoor roller-skating pavilion on the right. On the left, we could see boats motoring past the Navy Yard high rises and riverfront cafes, then further down, small marinas tucked into the wooded shoreline. Traffic on the trail was (and is always) very light with a few walkers, a few bikers and occasionally, a few fishermen hauling their tackleboxes, fishing rods and folding chairs to the water’s edge.
The trail meanders for about five miles before the exit to Benning Road which leads back to the Navy Yard on the opposite side of the river. But we recommend continuing on the trail for another five miles through lush forests and open marshlands, along quiet “country” roads (which are surprising in Washington, DC), past neighborhoods and athletic fields, and over wooden pathways that hug the shoreline. Our turnaround point was at the Bladensburg Waterfront Park, maybe two miles over the Maryland state line. There is a water bottle filling station and restroom there – along with a Dinosaur Walk. (Who knew?)
We returned to Benning Road to cross over the river and to pick up the trail, now on the northeast side of the Anacostia River. The return ride is visually interesting, but confusing. Rule of thumb: bear left whenever presented with a choice.
Navigating the Navy Yard area can be a bit challenging as residents and tourists crowd the outdoor cafes and spill out onto the expansive promenade. This wide swath of concrete and wood extends from the base of the Naval facility to Nats Park, an approximately half-mile stroll or slow, careful bike ride, past a very popular brewery.

Rode about 7 miles of this trail with my son along the Anacostia River at sunset. The trail is wide and well maintained. Picked up the trail just south of Benning road and crossed the river at the Frederick Douglass bridge. It was a great ride and we are looking forward to coming back to ride the full length of the trail.

A lot of people think this trail ends at Bladensburg. In fact you can continue on beautiful bike paths all the way to Wheaton or almost to Greenbelt.

Technically, the "Riverwalk" trail ends at Bladensburg, but then the "River" trails take over. https://www.traillink.com/trail/anacostia-tributary-trail-system/

Lots of water views, not too many hills... lots little bridges. parked at Anacostia River Park, rode to Bladensburg Md.

Lots of water views, not too many hills... lots little bridges. parked at Anacostia River Park, rode to Bladensburg Md.

anacostia river trail not up to date oct 2017

This trail was expanded last year and i ride it but you end way before the end. Want to support but payment of fee demands currency on your end. The trail ends in bladensberg now. Please update.

What we were looking for

My wife and I wanted to find a fairly easy, scenic ride and that's what this was. We used public parking near the stadium, went to the water and headed North. It's easy to find the trail from there, but it's kind of weird riding on the sidewalks initially. After the first section you have a long, "walk the bike" section in front of Navy Yard.

After that the original trail is closed so you have to go left at ML King Ave, up to Water Street and the right to follow Water. The trail shares the road for a bit, but it has very little traffic.

We then rode up just past the DC United stadium. This has some nice shady areas and places to pull off. You can go up farther and cross the river, but we turned back and crossed at the Sousa bridge and went South on the other side. There are restrooms available in the Anacostia Fields section of the park. This part of the ride is very sunny.

We continued to the Frederick Douglas Bridge and crossed back over the the stadium. The trail maps don't show a connection, but if you come off the bridge and go right on Potomac Ave, you will be right back where we started.

We walked 3/4 of the trail with our dog and got a good workout. The bike/ped bridges are really nice with great views. Needs mile markers.

Today, 5 of us rode our Trikkes on this trail.

This trail has a variety of surfaces, terrain and views. Parts of this trail are lovely... others, not so much.

We parked at the Anacostia Recreation Center parking lot (38°52'24.3"N 76°58'54.3"W) where there were open port-a-potties. This was good, because after that we encountered no restroom facilities (except a set of port-a-potties that were locked).

Along the river, on the eastern edge, the trail has nice views of the river, the marina, and the path is smooth and of decent width.

Near the northeast side, the trail gets rough, with broken patches and grass growing in the cracks and in large patches in the center of the path as it passes through a park.

Heading south on the west side, we had to ride on the street, because the trail is narrow and over grown.

The riverwalk in front of the naval yard is absolutely beautiful, although no wheeled transportation may be used/ridden in that section. (I am really glad we didn't have any roller-bladers with us. They would have had to take them off and walk barefoot, or turned around and not completed the loop.)

The pedestrian sidewalk crossing the Frederick Douglas Bridge (South Capitol Street SW) is very narrow. If 2 people, walking their bikes encountered each other, they might not be able to pass.

If the path were consistently maintained, and if there was another place on the western side with bathrooms, this could be a 5-star trail.

Will be really great--someday--but be careful of construction now

The ride is interesting, and will get better as the various parks are completed. And the bridge over the railroad tracks near East Capitol is both beautiful and interesting. But beware of the construction!!!

Right now (11/30/14), you cannot get to or past Benning Road going north on the east side. Moreover, while part of the barrier is marked, another branch is not. And as far as I can tell, once you go over the Pennsylvania Avenue Bridge going west, there's no way to get back on the west side path until 11th Street. Riding through the neighborhood is fine--you just need to be prepared to do it.

On the other hand, previous bike bans at the Navy Yard and Yards Park have apparently been lifted. Do be aware at Yards Park, however, that some of the paths lead to stairs (down), and there's no warning. So go slow.

Another 2 or 3 years and this will be a fun way to see a part of the District most miss. But for now, it's
a tease for what will come--and a construction site.