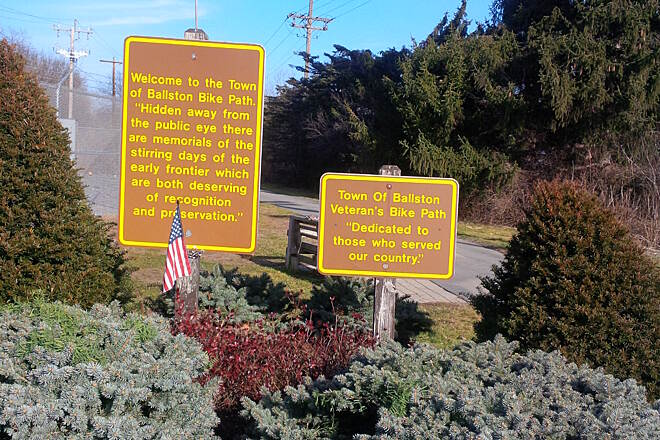 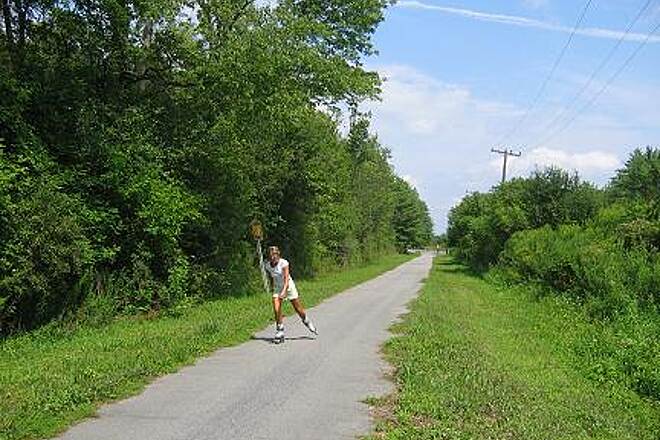 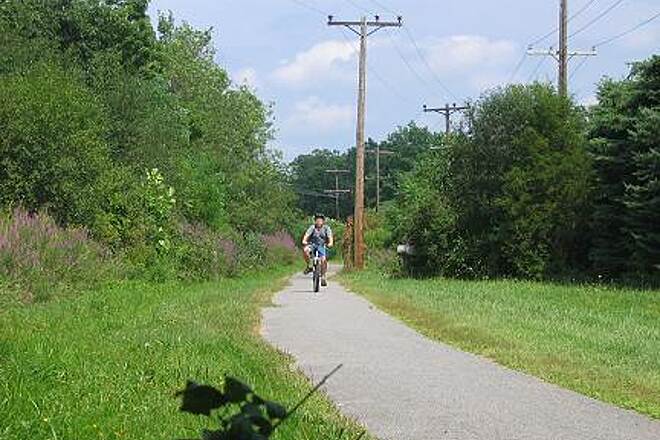 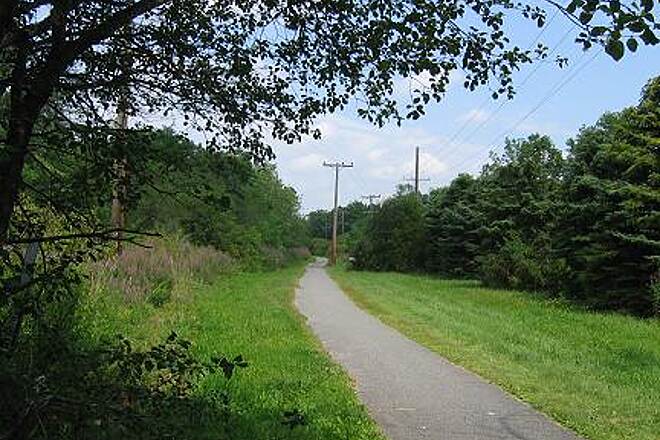 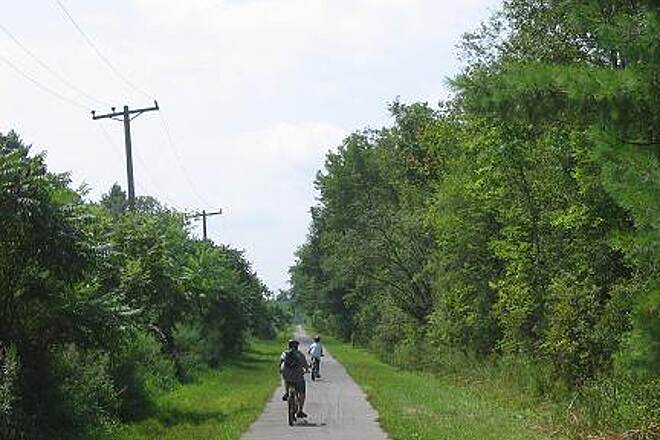 View Trail Map Send to App
This asphalt trail is the legacy of an inter-urban trolley system operated by Schenectady Railway Company (SRC) in the early 1900s. To attract visitors on weekends, SRC built an amusement park at Ballston Lake with a beachfront, some baseball fields and oval tracks for bike races and footraces. Passengers paid 25 cents to ride the wooden trolley car from Schenectady to Ballston Lake and beyond, even to Saratoga Springs. The trolley ceased operation in 1940, and the amusement park is just a memory now. There's good bass fishing at the fishing pier on Ballston Lake, not far from the Outlet Road trailhead.

The Ballston Veterans Bike Path has a lot to offer. Informative signs fill you in on the trail corridor's history. Every quarter mile, mileage markers help you track your progress. The trail is conveniently reached from New York 146A, a main route into town. The bike path will someday link up with an emerging network of multi-use trails in Saratoga County.

At the trailhead on Main Street watch for a monument dedicated to veterans from the town. Trees border much of the trail on one side, giving way for a time to scrub growth that allows a pleasing view of pastures and woods beyond. On the other side, a berm with sumac, holly and other shrubs separates the path from an active rail line. The Canadian Pacific tracks parallel the trail for most of its length. The path is open overhead so don't forget sunscreen.

Parking at Outlet Road is limited. Across the road, the trolley corridor—overgrown—appears to continue. For now, however, you'll need to retrace your route back to the start. If you brought your fishing rod and license, turn on Outlet Road and look for the sign for the fishing pier.

For the Route 146A trailhead, take Exit 9 off I-87 and head west on State Route 146. Take Route 146A north for about 6.5 miles to the Village of Ballston Lake. Shortly after crossing the railroad tracks, you'll spot the parking area for the bike path on your right.

Nice flat path for a run. Definitely not 3.5 miles as stated. It’s approximately 3.25 according to my Garmin.

quick stop for a ride

This is my go to trail. Close to home, well kept, god for biking or walking and have always felt safe on it.

Nice trail with occassional wildlife sightings and lots of rabbits

This is one of my favorite rail trails near me. My husband and I have walked and biked this trail on evenings and weekends to enjoy the outdoors as much as possible.

We enjoy the occassional sightings of deer, groundhogs and snapping turtles. Also, the frequent train that passes by.

However, we have stopped walking here for safety reasons due to a group of dirtbike riders who have no regard for the rule that prohibits the use of motor vehicles on the trail. It saddens me that I cannot walk there anymore.

The second ride on Oct 26, 2007, was on the Ballston Lake Rail Trail. It follows the old trolley line from Schenectady to Saratoga Springs. It's only 3.5 miles long, but the ATVers keep it open to the north of the official end of the trail. Unfortunately, it runs into a bridge which is out, and the informal trail turns down the embankment to the road. The abutments look in fine shape, and a little steel and wood would restore the bridge. Hopefully they're considering doing that.

It parallels the Delaware and Hudson (now owned by Canadian Pacific) railroad for most of its way, but that and the bridge abutments are the only railroadiana you'll see.

I tried to do this trail with my family and it was not a hit. There wasn't much for the kids to see or stop at to explore along the way. The path was also buggy and not pleasant for the kids.

Nice trail, but no views of the lake!

This is a nice short trail in good condition. I was surprised that there were no views of Ballston Lake anywhere along this trail, as the route is right along the western side of the lake. The trail is right next to an active rail line, which is not a problem except for the horn blasts for grade-level crossing.

In short, a nice trail for exercising, but not very scenic.

This is a wonderful trail. It is very well maintained and it is in very good condition. The markers to measure your distance are definitely an asset. Also they have signs along the way to tell you what was there. My husband has a problem with his vision and this was just wonderful for him.