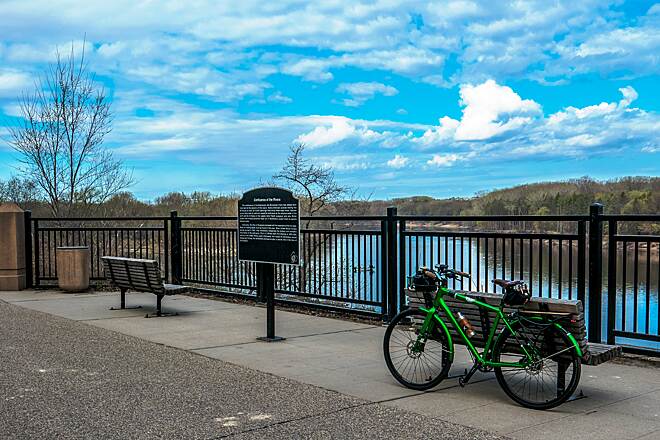 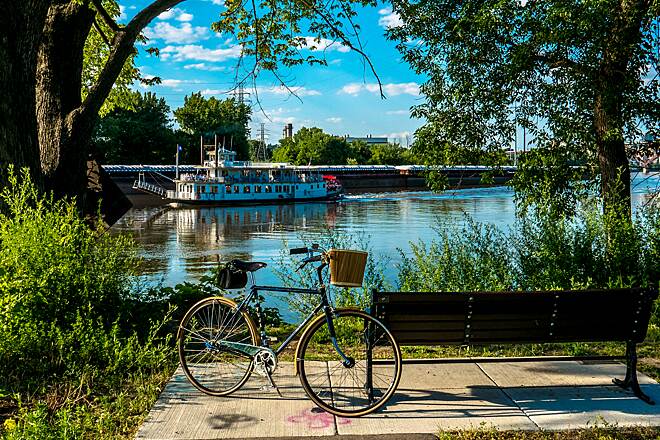 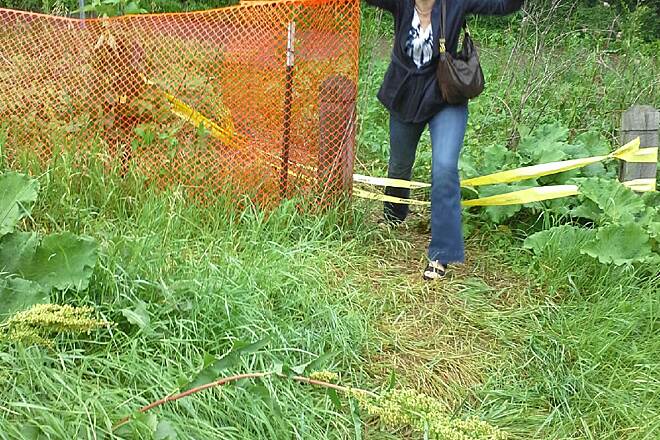 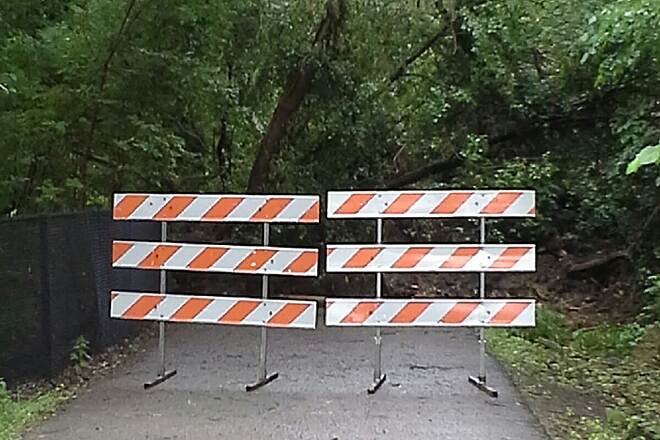 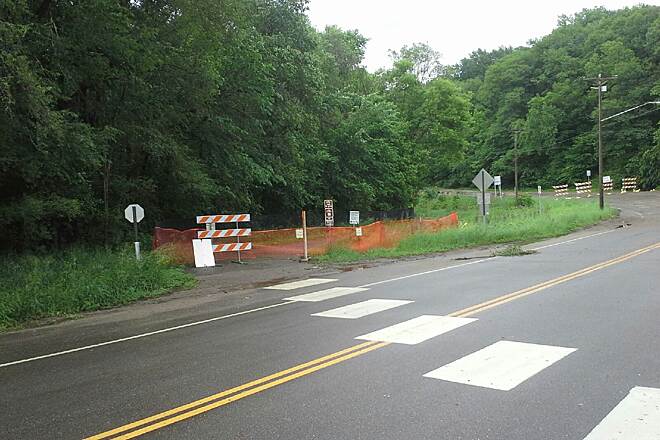 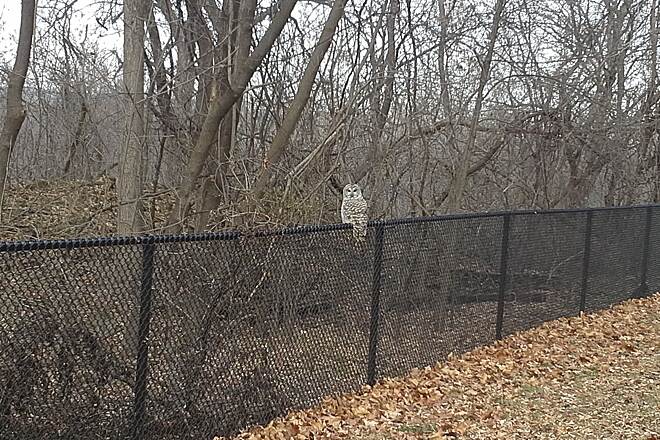 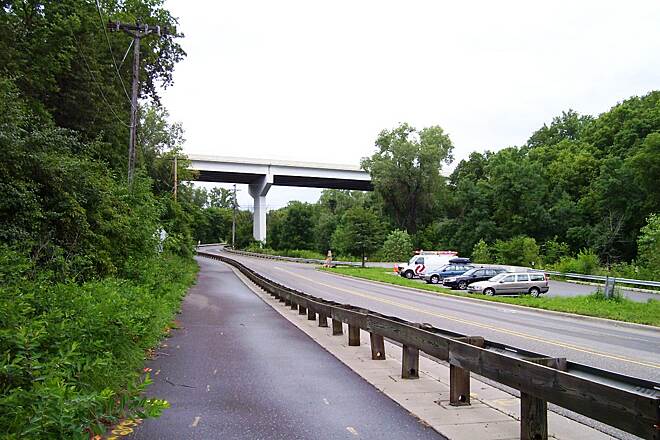 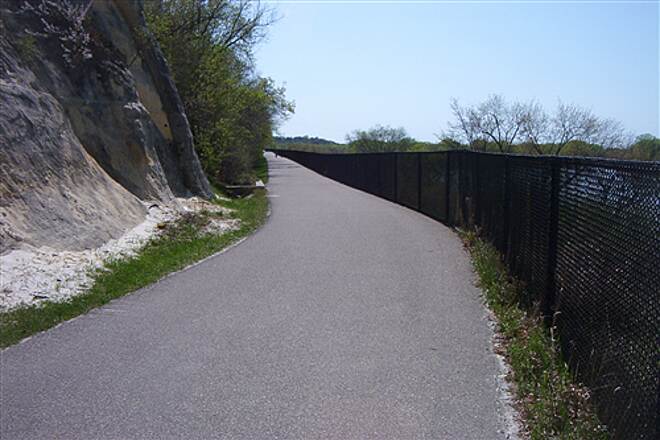 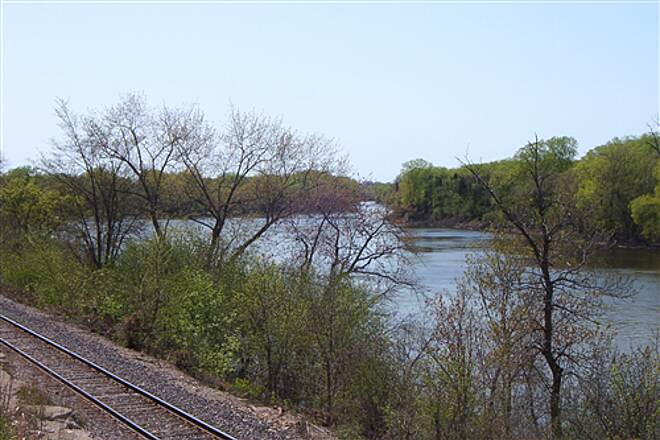 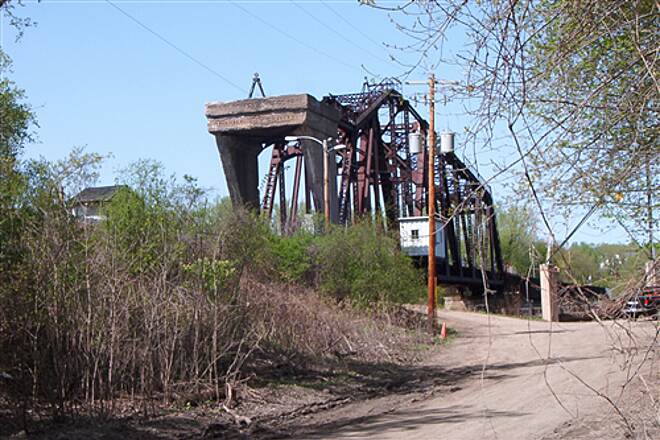 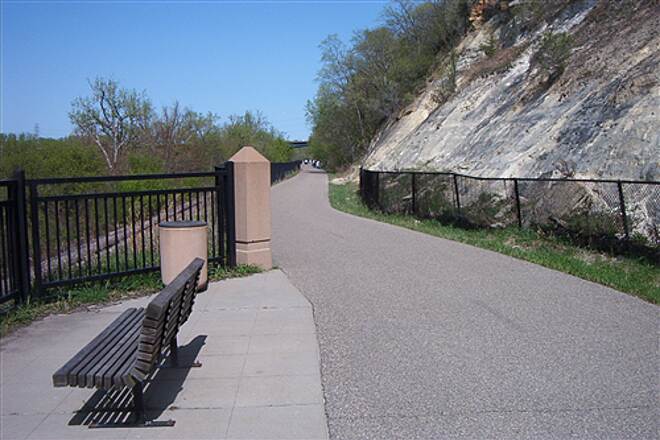 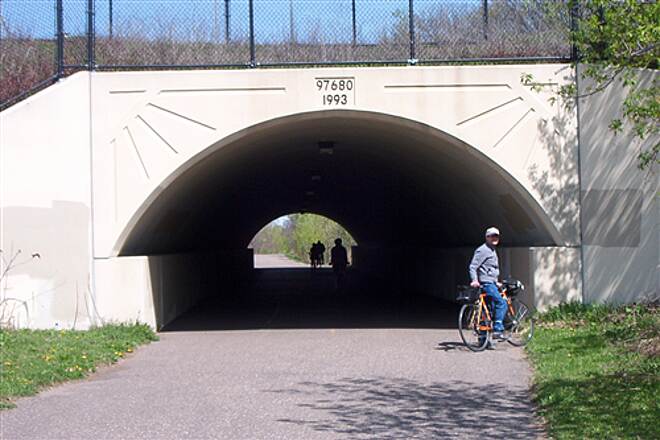 The Big Rivers Regional Trail runs along the upper portion of what was originally a two-tiered section of railroad track built for one of the state’s oldest lines, the Minnesota Central Railroad. At several points along its 4.4 paved miles, trail users will enjoy some of the best views overlooking the convergence of the Minnesota and Mississippi Rivers. Vistas include broad views of both river basins and glimpses of Minnesota’s first military outpost and National Historic Landmark, Fort Snelling, situated just beyond Pike Island at the confluence of the two rivers. As the trail approaches its northern end near the Pool & Yacht Club in Lilydale, the view upriver toward downtown Saint Paul is equally impressive.

In the city of Mendota (one of Minnesota’s oldest settlements), the trail skirts through residential areas on a raised railroad bed, crossing D Street for easy access, and lies only one block from Sibley Memorial Highway/MN 13, which runs through the center of the city. Following D Street a few blocks past the highway and beyond the Sibley Historic Site leads to the start of the Snelling State Park Bottomlands Trail, a rough-terrain route best suited for serious mountain bikers.

The Big Rivers Regional Trail is part of the extensive 72-mile Mississippi National River and Recreation Area, itself part of an even greater network consisting of hundreds of miles of trails throughout the Twin Cities area.

To access the Big Rivers Regional Trail in Mendota Heights, from the I-35E and I-494 interchange in Saint Paul, take I-494 W. to Exit 71. Turn right (north) onto Pilot Knob Road, and go 0.2 mile. Turn left onto Mendota Heights Road, and go 0.3 mile to the parking lot at the stone overlook.

A smaller parking lot is available at the north end of the trail just off MN 13, at the bottom of the hill on Lilydale Road, at the railroad trestle next to the Pool & Yacht Club. From I-35E N., take Exit 102. Head northeast on MN 13, and immediately turn right onto Lilydale Road. In 0.2 mile see the parking lot on your left.

Great trail for rollerblading or longer bike ride if you connect with other trails!! Beautiful views of the river and cliff side. Mostly flat with very slight incline from lilydale to Mendota. After the tunnel bridge at 55/62 trail is fresh blacktop a rollerbladers dream!

Nice riverside trail that takes you to the St. Paul city center!!

This trail is beautiful and I've biked it often commuting to work (and run it). However, I'm very frustrated by the lack of connection to the trail - I understand the steep gradient presents a challenge but some stairs near Lexington and 13 would change my life and quite a few other people I've talked to. In part because the connections are few and far between, the trail is both isolated (halfway down a cliff) and can feel dangerous if you're by yourself and encounter a weirdo or two, which I have. Lighting would help, but ultimately better connectivity to 13 and making it a more-traveled route would improve my experience on this trail immensely.

Ride it every day!

I'm lucky enough that this trail is between my home and my work, so I ride it as often as the weather allows. I've seen deer, turkeys, finches, eagles, buzzards, plenty of rabbits, and even a fox (!) on the trail various mornings, which makes for a fascinating commute. It is well maintained, although tree roots have made it bumpy in places.

A good chunk of the trail along the river is bordered by limestone cliffs on the south and a black chain link fence on the north river side. Previous fallen rock near the trail makes for interesting thoughts. Biffy at trail beginning and end. Rides past two restaurants midway of Lucky 13 and Axel's. Easy trail without many inclinestudents of much degree.

I walked the paved trail two days in a row and saw lots of rabbits, pigeons, chipmunk, gorgeous dragonflies, heron flying overhead, and a mother turkey with her brood of babies. There's a tiny flowing stream in one section and water trickling down rocks at one point. Lots to notice and appreciate at a walking pace.

The trail is really flat and accessible. There are a couple of sections where it's crossed by roads - one of which traffic moves at about 55 mph. If you have a member of your party with mobility concerns, I suggest starting at the northern end, otherwise you'll have a short walk or need to risk crossing a highway. There's not a lot of traffic, but it does move fast.

Rode the trail last weekend with my five-year-old grandson. We had a great time and can't wait to go back

IF that is 5 star a 1 star must be gravel

Started in Lillydale and skated to the Lower River crossing overview. I'd say 70% of the trail was so rough it made my feet numb. Beautiful scenery but the asphalt needs a coat of sealant.

I was on the trail this weekend, I don't know when it reopened, but I am so happy that it is open again!

This trail is great!

It is a shame that almost after a year we do not have this gem of a trail reopened. Life and weather happen, but that does not mean that we cannot or will not engineer a new trail. It is my hope of hopes that this beautiful trail is reopened this biking season.

The section between Lilydale and City of Mendota is still closed - but if you are a bandit and want to circumvent orange mesh fencing the trail is clear and passable. This section remains closed due to reported unstable cliffs along side the trail. One wonders if they ever work on it - never any workers there - sign promises it to be done in October!

Stay off this trail unless you want a citation

The orange barrier usually completely blocks access to the trail but was moved to the side one Saturday morning last month so I bike the trail to see if it might be open again. It was nice up to where the orange fence blocked the trail and the mud slide is still on the trail,a couple miles in. Unfortunately, when I turned around and bike back out an power hungry park ranger gave me a $120 dollar citation for biking on a closed trail even though I didn't slow down under 20 mph or cross any barrier or anything. Supposedly the barrier was moved by the construction workers. A warning would have been appropriate but some people just don't understand community policing. I sure hope this trail opens again someday it is the only way to get from Lilly Dale to Mendota without having to bike on the road that is rough and doesn't have much of a shoulder.

Update from Dakota County Parks Department - the section of Big Rivers Regional Trail along Highway 13 between Mendota and Lilydale is closed indefinitely to pedestrians and bicyclists due to a mudslide. Check back for updates.

This is a spectacular trail all the way thru. We usually take it into St Paul to Harriet Isl area for lunch and back to the overlook in Mendota. Cant say enough about the Parks crew and everyone else involved that maintains this trail

Every time I ride this trail I love it more. On the hot summer days it is shady and cool all the way to the Mendota bridge. I wish more people used it, but I have to admit that I like it when I don't see a soul on my ride. There is some uneven pavement on the trail when crossing Hwy 13 in Mendota. It's not the end of the world, but the ruts are unpleasant.

"Starting just NE of the 35E Bridge, you run up hill until you reach the %% Bridge and run back to the beginning. "

This is among the very finest trails in the Twin Cities area.
The views are spectacular and the trail surface is smooth and rut-free.

You'll hardly believe that you're near the center of a metropolitan area as you ride this smooth trail cut into the side of the bluffs at the confluence of the Minnesota and Mississippi rivers and extending through the marshlands in Lilydale and now out to end of Harriet Island (about 7 miles) in downtown St. Paul. Scenery is varied and beautiful all the way. Urban trails don't get any better than this one.