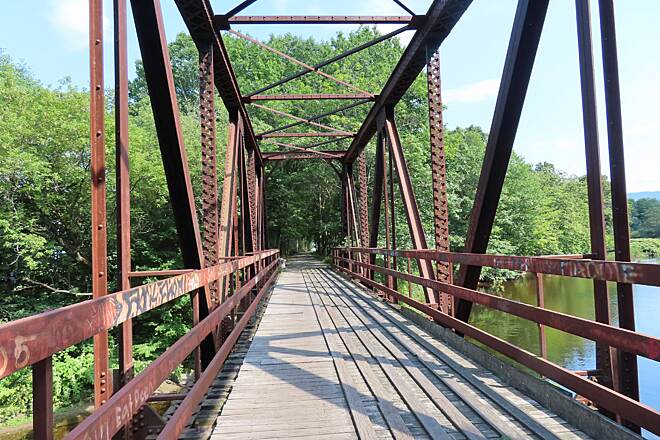 The Bobby Woodman Rail Trail, a hard-packed dirt and gravel pathway, begins off a quiet street at the southern end of Claremont and quickly dives under pleasant tree cover. After about a half mile, the rail-trail approaches Monadnock Park, a favorite of local athletes with baseball diamonds, football fields, and tennis courts.

Roughly a quarter mile later, the trail crosses the Sugar River on a former iron railroad trestle and, once on the opposite bank, continues through a busier and more open environment. Here, it parallels Washington Street, the city’s commercial corridor. At its end, the trail connects to the Sugar River Trail, a picturesque 10-mile route known for its covered bridges, railroad trestles, and abundance of wildlife.

The trail is named for the late Robert Woodman, who was active in city government, including participation on the Conservation Commission.

The trail was in good shape. Unfortunately there wasn't much to see. The highlight was the trestle over the Sugar River. The place where the trail 'parallels Washington Street' was busy and care was needed because many cars were entering the shopping area.

Since the trail was short, we continued on the Sugar River trail. There was a fair amount of working being done on it and it was not as nice as it was one year ago. Sand was being added in places which made it more difficult to ride through. Overall, however, we'd recommend the Sugar River trail west side and make sure you see at least one of the two train covered bridges!