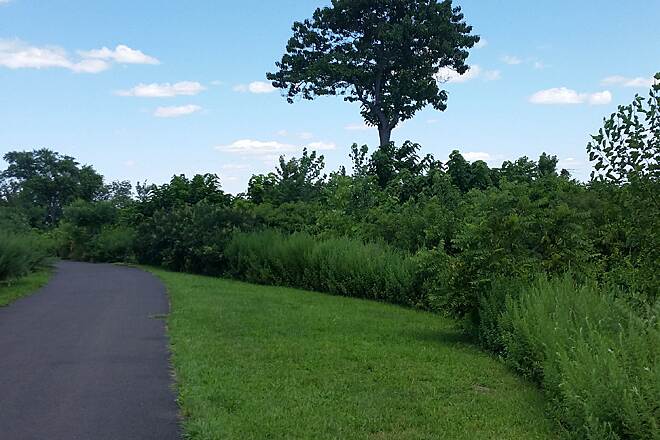 View Trail Map Send to App
Since it opened as a railroad spur in the 1800s, this pretty trail has always been about connections. In 1834 the Philadelphia and Trenton Railroad launched the spur to carry goods from Bristol, Pennsylvania, then a bustling little port where the Delaware division of the Pennsylvania canal system met the tidewater of the Delaware River.

The canal still exists in Bristol, but the original main line of the Philadelphia and Trenton railroad was relocated in 1882. That line became Amtrak's New York to Washington corridor, one of the most heavily traveled passenger railroad routes in the country. Conrail donated the old spur line to the town of Bristol, and the trail opened in 1980.

The path incorporates the rail corridor and some of the former canal towpath, carrying trail users to the Bristol Marsh, a unique and sensitive freshwater habitat. Traversing downtown Bristol, this residential trail eventually will provide public access to the Delaware River and waterfront at the end of Green Lane. This smooth asphalt trail also connects with nearby ball fields, grassy parks, retirement communities and an elementary school.

From the Pennsylvania Turnpike, take the Bristol Exit. Take Green Lane into the Borough of Bristol and turn right on Radcliffe Street; continue through the historic district to the Bristol Spurline Park parking lot at the end of the street. The trailhead is marked at the parking lot.

like this trail as it goes through Bristol PA. crosses several streets and you can connect to the towpath from it on Jefferson Ave in Bristol. can also ride to the end in a housing development and then ride another paved section to the river. goes behind some churches and the WAWA on Green Ln. nice easy ride, flat with some nice scenery. watch out for squirrels!

Made a point of riding it for 50th birthday

I wanted to ride my age for my 50th birthday on June 8. I rode my hybrid into Bristol from Levittown and found a short portion of the spurline park on the left, though the map showed it on the right. I rode that along the Delaware river, then got back to Radcliffe street but somehow got turned around. I finally found it though, and can say I rode the whole trail(though it's small) through Bristol before heading to the canal towpath for my trip to New Hope. I enjoyed the ride and noticed others walking their children on it and some elderly folks from the nearby Grundy towers using it to walk for exercise. It only received a 4 star rating due to it's mostly urban type setting and the poor conditions around the first section near the river. Regardless, it was a fun beginning to a long and fun day of riding which ended after 4pm and 61.66 miles of bicycling. There are some other Rails To Trails sections not too very far from us and I plan to hit them too at some point.