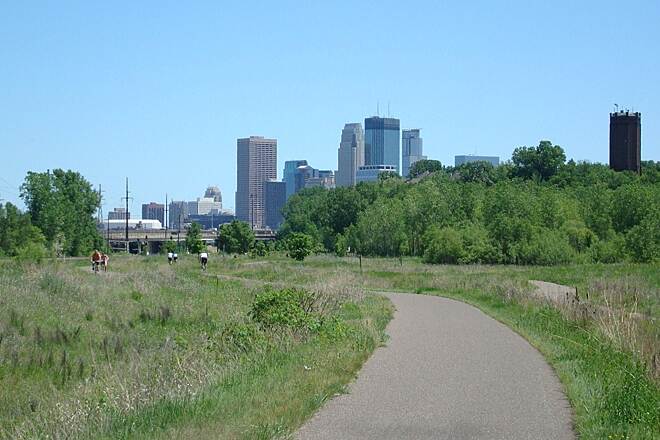 Running past mostly industrial properties, the 12-foot-wide, paved Cedar Lake LRT Regional Trail occupies a former Minneapolis and St. Louis Railway (and later Chicago and North Western Railway) corridor. The right-of-way became inactive in the early 1990s and was acquired by the Hennepin County Regional Railroad Authority (HCRRA), which installed the trail. The HCRRA always planned to use the corridor for a future passenger rail line; in fact, the LRT designation of several Hennepin County trails indicates those pathways built on corridors intended for future light rail transit use.

Fortunately, even though the planned Southwest LRT line will run on the entirety of what is now the Cedar Lake LRT Regional Trail, the HCRRA has committed to maintaining all existing trails. In this case, the trail will become one of an ever-increasing number of successful rail-with-trail projects around the country.

To begin at the western end of the Cedar Lake LRT Regional Trail in Hopkins, park at the Depot Coffee House and trailhead, which lies immediately south of the trail on a spur that connects to the Minnesota River Bluffs LRT Regional Trail between Excelsior Blvd. and Milwaukee St. Take I-394 to Exit 3, and follow US 169 4.2 miles south. Take the Excelsior Blvd./County Road 3 exit. Turn left onto Excelsior Blvd. The coffee house will be on your right in 0.2 mile. The trail begins across the road.

Heading east out of Hopkins, there is also a large parking lot at the Sam’s Club, immediately north of the trail access, on Louisiana Ave. S. in St. Louis Park. Take I-394 to Exit 5, and merge onto MN 100. Follow it 1.8 miles south, and take the W. 36th St. exit. Turn right onto Wooddale Ave. S., and in 0.4 mile turn left onto MN 7. In 0.3 mile take the Louisiana Ave. exit. Turn left onto Louisiana Ave., and in 0.1 mile Sam’s Club will be on the left. The trail is at the southern end of the parking lot.

For access to the eastern end, take I-394 to Exit 5, and merge onto MN 100. Follow it 1.4 miles south, and take the CR 5/Minnetonka Blvd. exit. Turn left onto Minnetonka Blvd., and go 0.9 mile. Turn left onto CR 25, and in 0.6 mile make a sharp right onto Excelsior Blvd. Turn right onto Abbott Ave., where you can likely find parking along the street. The trail is in 0.2 mile, where Abbott meets Chowen Ave.

It was nice, but it's been destroyed

The trail has been torn up for the light rail line.

Surprised by the rave reviews on here. I rode this trail recently for the first time in several years. Like many of our Twin Cities trail, it is amazing in potential and horrible in reality. These trails are worthless if not maintained correctly. I will not ride this trail again with my road bike until it is patched or resurfaced. Probably great for mountain bikes, but a little tender loving care would make it amazing for everyone.

I'm surprised there are so few reviews of this trail -- it is one of the most unique rail-trails in the country. Since there had been multiple tracks on the property, the Park District was able to get an extraordinarily wide swath of land and they designed it so that it serves walkers, runners and bicyclists, each group on its own tread. Plus, there's even room for some attractive horticulture and plantings. And, if you're lucky, a train will whistle past on the remaining live track on the other side of the fence. I don't think there's another trail like it in the country.

Great trail, flat ride, somewhat scenic with plenty of trees. Recently moved to Edina and this trail is a quick ride to Lake Calhoun and shopping centers on Excelsior. Highly recommend taking advantage of this trail if you're in the area.

Part of a great network

This trail is, as you say in your description, part of an extensive network of paved trails in the greater Minneapolis area. I love it! An easy way to get either into or out of the city. I live downtown and use it to cruise the city's lakes & to visit friends in the suburbs.