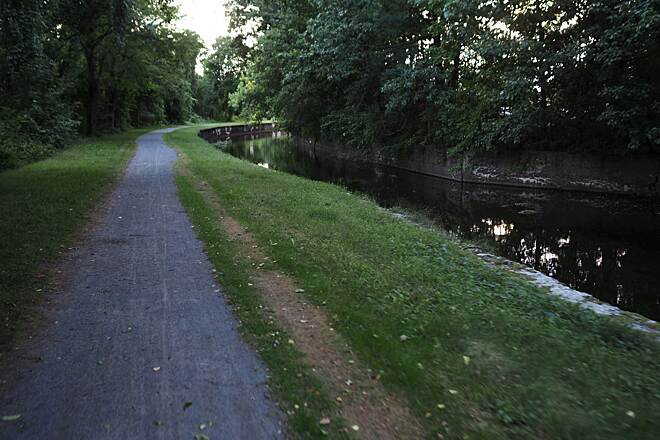 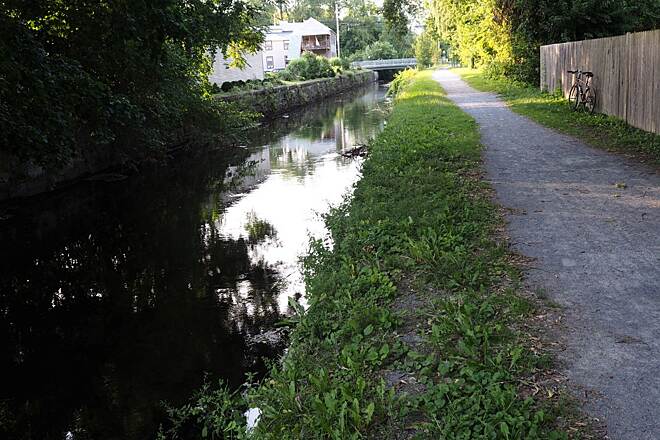 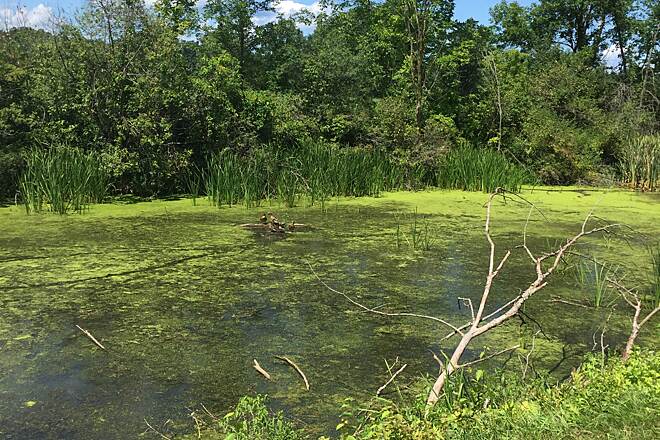 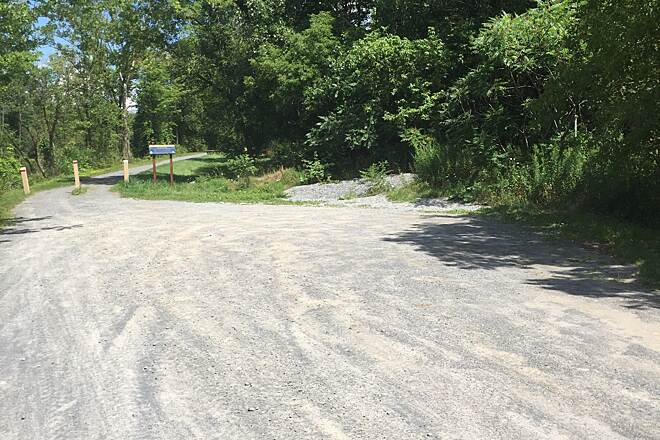 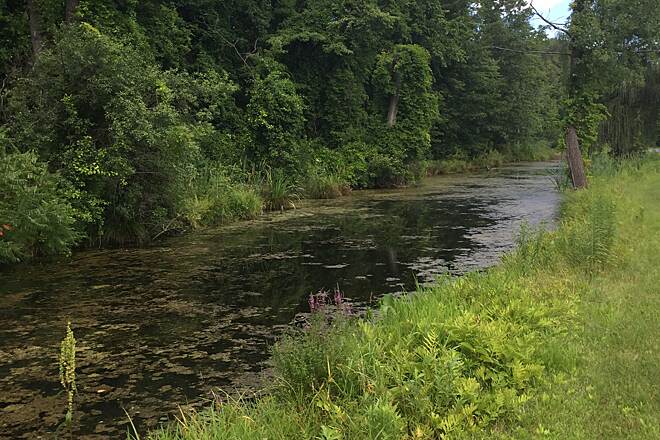 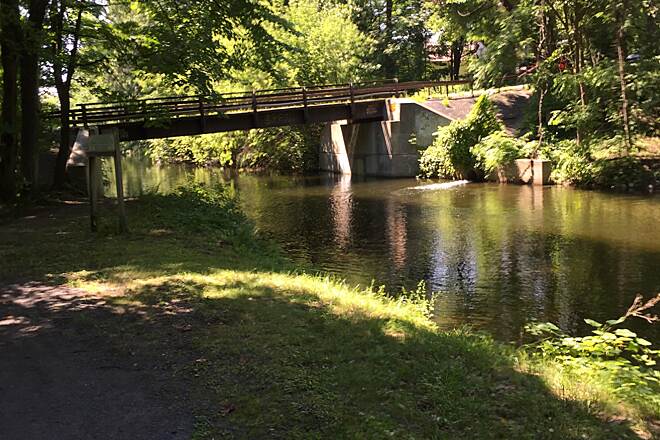 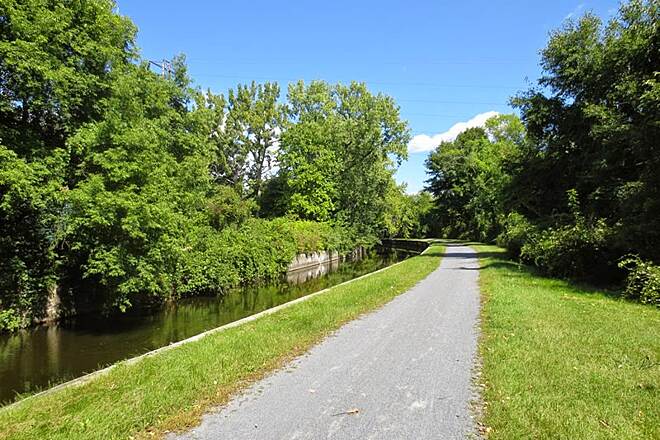 The Glens Falls Feeder Canal Trail begins at the Feeder Dam in Glens Falls and follows the Hudson River through town to the Champlain Canal, then turns south toward Fort Edward. The 9-mile trail follows a portion of one of New York's few remaining sections of the original 1820s canal system. There is one short on-road segment (1 mile) through Glens Falls that goes around the paper mill.

In Glens Falls, you can also jump on the Warren County Bikeway by turning north onto Platt Street from Warren St. (Route 32), which will take you to Lake George. The way is marked.

You can access the Glens Falls Feeder Canal Trail from numerous places. ; take Wing Street north to where it intersects with Factory Street. The trail is at the intersection. You can park nearby at the trailhead for the Empire State Trail at Mullen Park on McIntyre Street, and there is overflow parking across the street and at the lower end of the park. You can also park at Burgoyne Avenue and Feeder Tow Road, at Glens Falls Civic Center, off Glen Street along the river and at the western terminus at the Feeder dam (Haviland Avenue).

My wife and I rode the Warren County Bikeway and connected to the Glens Falls Canal trail system on August 31, 2020. The trail meanders a bit through Glens Falls local streets, then we rode on Warren Street a couple of blocks to Shermantown Road and connected to the Feeder Canal Trail. The Feeder Canal trail is a hard packed dirt/stone dust trail that runs along the old canal system…takes you past some old manufacturing plants, working cement plants, etc. Very flat, easy pedaling, you don’t really need a mountain/trail bike. The route we took went around some old industrial areas, past the backyards of some neighborhoods, through some small downtowns. A good amount of shade all along the way. We ended up at the Five Combines park and turned around, so we roughly went 10 miles round trip on this section as well. This is a nice resource for local folks in this area. Definitely check out the Feeder Canal website as it details more about the trail including several different branches you can take for more miles. A nice quiet ride.

Not a rail-trail but rails anyway.

This trail isn't a rail-trail, but there are rails to be found anyway. The trail is basically in two pieces, connected by road, separated by an industrial plant. The western end goes between Haviland Avenue and US-9. There is parking at Haviland, as well as picnic benches. You cross the canal to the south side and run on the towpath for quite a ways. Canal on your left, industries on your right. Watch for a canal basin with two sunken canal boats.

After you pass Murray Street, look right. Just before the canoe launch is a white fence. Underneath that fence are rails left over from a rail spur that went out to the industries you passed.

You then have to go up the hill to Warren Street, turn right, and turn right again at Shermantown Road, where you pick up the canal trail again. It's on the towpath the entire way, past several canal-served industries, a canal basin, the Five Combines locks that take it down the hill to the Old and current Champlain Canals, and the Champlain Canal Towpath Trail.

The trail is well maintained and pretty the whole way.

The Glens Falls Feeder Canal Trail is an easy ride. Super flat but some sections were very scenic. I posted a photo in the gallery.

If interested, there are more photos and a video of the trail here
http://rc-pedalpoint.blogspot.com/2014/09/glens-falls-feeder-canal-trail.htm

The Feeder Canal is really what this trail is all about. The first half mile of the trail rises over 100 feet. The original canal took 10 locks in this short span to raise the boats that high. These locks are still there and easily visible. One section contains 5 locks in only a few hundred feet. This must have been a true nightmare for the canallers. The remainder of the trail along the canal is fairly level. Parts of it give a feeling of what the canal looked like 100 years ago, when it was active.

There is a section in downtown Glens Falls where the canal towpath is closed off, and the trail deviates onto local streets (Warren St & Oakland Ave), then crosses Rt. 9, before resuming. These are very busy streets, especially the intersection of Rt. 9 & Oakland Ave. One good point about this detour - it passes right by the Hyde Collection ( http://www.hydecollection.org ). This is a small, but quite superb Art Museum with a broad representation of art by well-known masters, in both classical and also 20th century art. Well worth a visit.

back side of town

This trail is easy to walk and there are places to eat or get drinks. The only negative about this trail is that it shows the other side of town- residents who do not care how they dispose of their trash behind their place of residence (even dumping into the canal) and commercial properties with their trash issues.
The only place that kept the area clean was the gravel company- thank you, it made that section of the walk pleasant.

The trail states just a bit west of Rt 9 along the Hudson River at Richardson Street right in Glens Falls. After you cross Rt 9 (Main Street) you need to work your way north and east around the paper mill where the route is not well marked. A bit past the factory at Shermantown Road the Lake George- Glens Falls bike trail comes in from the north. The rest of the trail along the old feeder canal is well marked and easy to follow heading downhill toward the old Champlain Canal Towpath. On the east end of Hudson Falls at Burgoyne Ave you pass the five combines Historic Locks Park with parking and facilities. When you hit the Champlain Canal towpath you turn right or south and bike on to Ft Edward. The last mile is along local access roads and ends at the Amtrak Trail Statuon where there is parking. Total distance is between 8 and 9 miles. An excellent map of both trails is available from Glens Falls Transportation Council, Washington County Muncipal Center, 383 Upper Broadway, Fort Edward, N.Y. 12828 Bob Youker

"I take my four kids on the Canalway Trail--Glens Falls Feeder Canal Trail and stop for ice cream, playtime, frisbee in addition to walking along the canal. The only difficult part is crossing Warren Street and Bay Street. The Warren County Bikeway connection goes up to Lake George Battlefield Park.

Historic markers are on the way and also food/drink if you want at the junction of Rte 149. We have travelled up to the Magic Forest Amusement Park on this bike path.

My kids are 7 and 9. There are some hills and thrills especially when you go up and over Quaker Rd and 149; probably distance and difficulty would be an issue for kids 6 and under. There are maps available throughout the area for these bike trails."

Pleasant day ride with many services nearby. You can connect with Warren Co. bikeway via local streets.