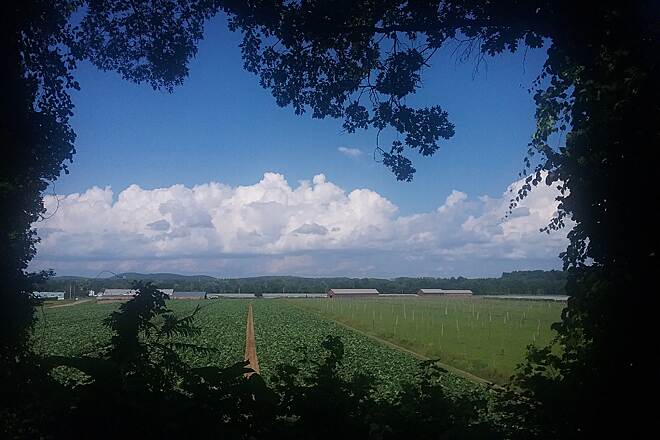 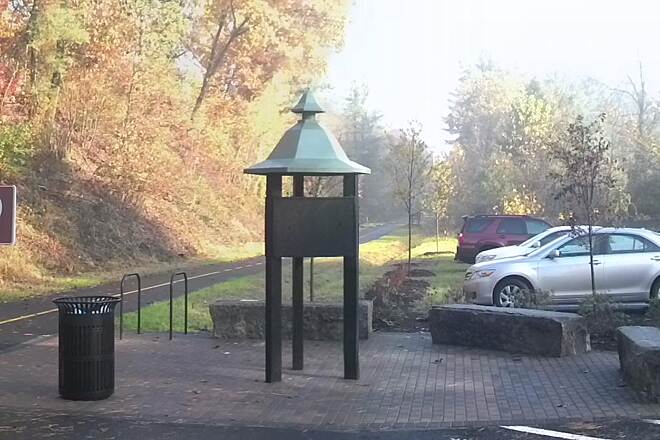 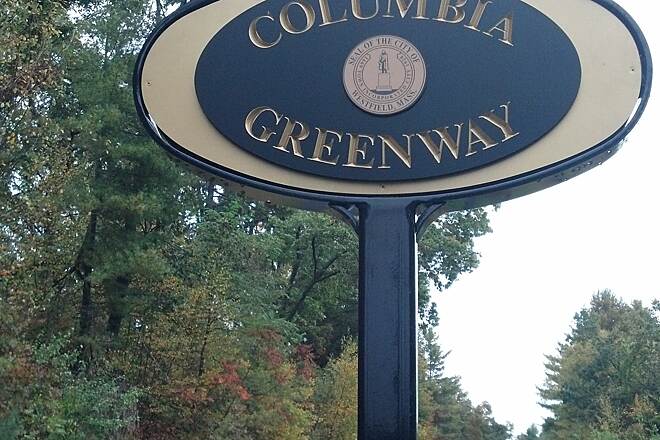 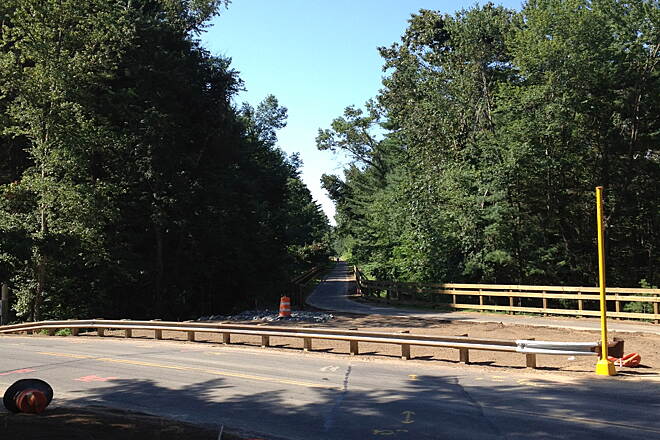 The Columbia Greenway Rail Trail offers just over 2 miles of paved, tree-lined pathway through Westfield in southwestern Massachusetts. The trail runs from Main Street, across the Great River Bridge over the Little River, to the Southwick town line. Most of the trail is elevated, following the former New York/New Haven/Hartford Railroad.

From its southern end, a connection can be made to the Southwick Rail Trail, which continues nearly 7 miles to the Massachusetts–Connecticut state line.

A parking lot is available at the southern end of the trail behind the Shaker Farms Country Club (866 Shaker Road in Westfield).

I'm reviewing the Southwick Rail Trail and Colombia Greenway Trail together as I rode up from the Farmington Canal trail and didn't see where one ended and the other began.

The two trials are smooth, relatively scenic, well-marked, avoid too many road crossings (especially nice when in a neighborhood), and are a pleasant ride for any skill level.

This is by far the best rail trail I have ever been on!!!!

Work on extending the Columbia Greenway Rail Trail is beginning at Main Street in Westfield. It is now 2.4 miles long and any extension will be greatly appreciated. The downtown extension insures that the new section will be heavily used. The rest of the trail is in excellent condition.

This is slightly out of date, you can park at the Big Y now and start the trail and more work is being done to extend the trail. Very nice for everyone to use, connects to southwick and then to Connecticut you can go well in to ct. For an all day trip.

I rode the trail for the first time today as part of a loop into Connecticut via Southwick and Farmington River Trails. I started from the Stop & Shop Parking lot on Main Street in Westfield. The Columbia Greenway is completed for 3 miles finishing for now at the Stop & Shop on Main St.

The remaining worker was wiring the streetlights along the first half mile.

The views on both sides are very good. This time of year (Oct 22, 2015) the amber tones and green grass with near peak foliage for a background on the left and the city of Westfield bustle on your right.

Only problem was stopping to look at the views.

Rode this trail in September 2015. Parked in the area adjacent to the Shaker Farms golf course. Work continues into the downtown area of Westfield close to the Stop & Shop, with more extensions to follow. Great job with this beautiful new trail, and so exciting to watch the progress with all of the connections North and South! Congrats to all

I bought my house just to be near this trail. You can park at the Big Y grocery store on East Silver Street and go for over 30 miles of paved bike path. The Columbia goes right into the Southwick trail which connects with Farmington River Trail. A great 60 or 70 mile round trip full day trip or what ever mileage you want. Westfield has started the next leg which will go to the revitalized downtown waterfront area. This is trully a treasure.

Rode the almost complete trail extension over the Little River and almost to Salver St. in Westfield. Still technically closed, there's just some cosmetic touches and bridge railings yet to finish. Will give good access from CT to a major MA town.

Excellent path for 5 or 40+ miles. Nice scenery and trail is in good shape. Can't wait for the completion into downtown Westfield

Pristine condition and no speed bumps!

Rode the Columbia yesterday and loved it. Kudos to the crew keeping the trail in such good condition! The pavement was nice and smooth, free of the frost heaves that are like speed bumps for bikes. The terrain was relatively level, easy on the knees. We saw pedestrians, rollerbladers and cyclists. There were also a number of places along the trail to stop for snacks and drinks. I would also give this trail a five star rating for attitudes. Could have been the day but courtesy and friendliness is a bonus and we found it !