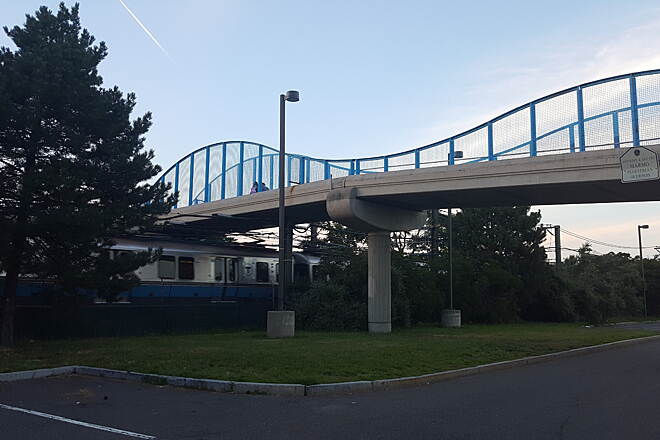 More and more, airport lands near previously under-used rail corridors are being transformed from largely neglected vacant lands into urban greenways. These new vibrant spaces are used not only by residents but also by those who would rather start their bicycle vacation from a major airport. The East Boston Greenway is a perfect example of this new dynamic.

If you have a long layover at Boston Logan International Airport, this nearby trail is a good way to reenergize yourself. Alternatively, the airport’s service road from the terminal is also open to bicyclists. The Massachusetts Port Authority (Massport) operates this rail-with-trail along active tracks and has linked several green spaces that now total almost 15 acres. The heavily used corridor sections are gated and closed in the evening, but usually not until 8 p.m. in the summer. The parks within the longer corridor stay open later and are heavily used by families from adjacent neighborhoods. The parks include playgrounds, spray parks, and bike rentals.

Beginning at the southern trailhead on Marginal Street, take in the views from the Boston skyline, just across the harbor. Heading north (the trail has separate, parallel bicycle and pedestrian tracks), the East Boston Greenway will take you under Sumner Street, where a satellite campus of Bunker Hill Community College is located on your right. You’ll pass a number of commercial and residential properties as you pass under Maverick and Porter Streets. Five miles from the trailhead, you’ll pass under the East Boston Expressway, followed by Bremen Street Park and the East Boston Branch of the Boston Public Library on your left.

Constitution Beach includes a bathhouse, concessions, playgrounds, sports facilities, an ice rink, and ample parking. The beach is a perfect place to sit at night and watch the jets take off across the bay.

To reach the northern trailhead at Constitution Beach from I-90, take I-90 east until it becomes MA 1A N. Take the exit for MA 145/Bennington St. toward Winthrop/Chelsea, and travel north 0.1 mile. Continue onto Vienna St. for a few hundred feet, then take a slight right onto MA 145/Bennington St. Go 1 mile, then turn right onto Saratoga St. In a few hundred feet, turn right onto Bayswater St. Take the next right onto Barnes Ave., and follow it to the parking lot that runs the whole length of the beach.

This is a city trail with views of the seashore. It goes through the Bremen St. Park which is used by children and adults skating, running and walking. At one terminus is a stunning view of Boston over the harbor, with easy access to the harbor walk and Piers Park. The other end is at Constitution Beach, from which you can watch airplanes take-off and get pizza or a hot dog in the summer. There is also a stopping point overlooking the wetlands. Lots of local restaurants around: Italian, Salvadorian, and more. If you’re a cyclist don’t expect a long, fast experience. It is scenic and gives you a great sense of “Easty”

I live in East Boston and use this trail quite bit. If you are a cyclist, beware of pedestrian traffic and kids who do not pay attention to bike traffic. Also, the East Boston Greenway Connector to Wood Island Marsh is open and at its end give an amazing views of planes arriving and departing Logan International Airport.

The long awaited connector to Constitution Beach will be open soon as I can see the trail is complete but the gates remain closed and locked.

I love this ride and look forward to it finally being complete.