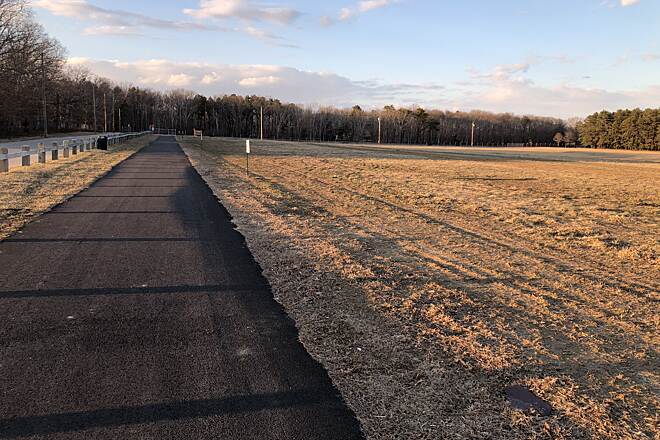 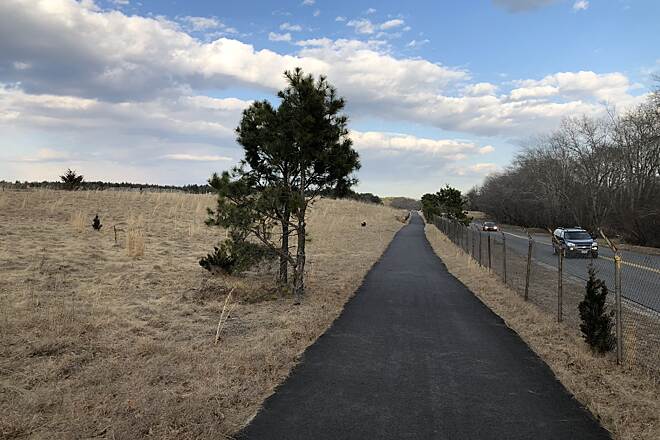 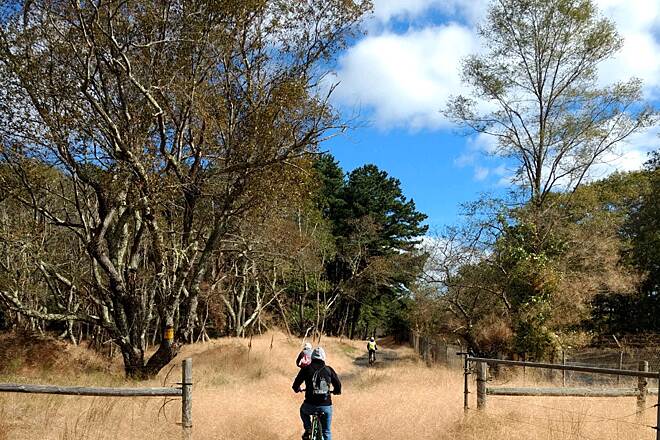 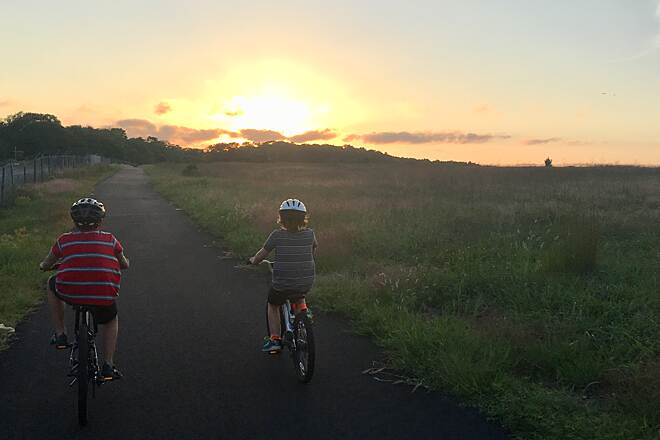 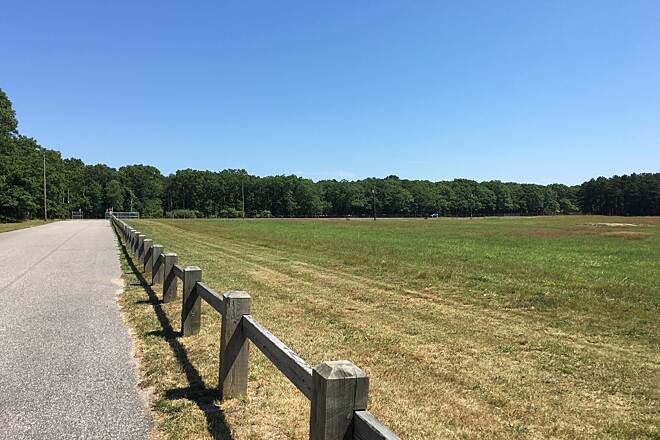 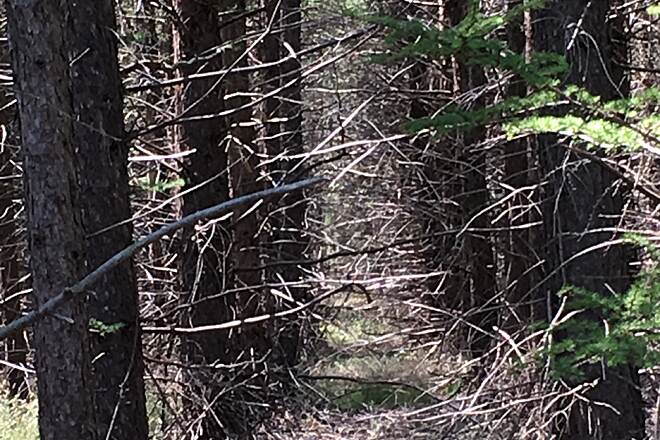 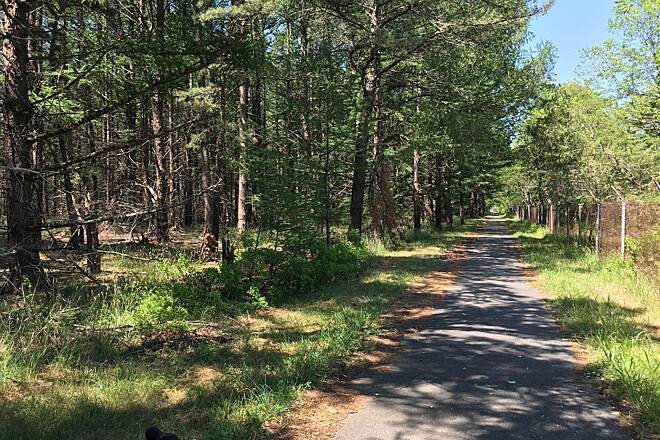 The EPCAL Alternative Transportation Path loops around the 2,900-acre Enterprise Park at Calverton (hence its name: EPCAL) on New York’s Long Island and links to the Town of Riverhead’s 65-acre recreational facility on the western portion of the park. Families visiting to participate in organized sports at the athletic fields can simultaneously walk, jog, bike, or skate on the trail to access various other activity centers in the region within the towns of Riverhead, Brookhaven, and Southampton.

The experience along the paved pathway is scenic with a few gradual inclines. A fence and wide median separate the trail from the adjacent active roadways and much of the other side of the trail is lined with trees. A highlight is passage by Grumman Memorial Park, where you will see two fighter jets on display. Isaac Dog Park and Veterans Memorial Park can also be reached from the trail.

In addition to these recreational amenities, the trail allows pedestrians and bicycles to take trips that would otherwise be made by motor vehicles by providing two north-south off-road routes that connect NYS Route 25 and River Road, two important east/west transportation routes. These new north-south connections provide a safer off-road alternative to traveling on-road on Edwards Avenue.

Various existing county- and state-designated bicycle routes are incorporated into the route, as well as links to Suffolk County Public Transit bus routes. The EPCAL Alternative Transportation Path links to the New York State Route 25 Bike Route at the intersection of Route 25 and Route 25A on the north side of the parcel. Exiting from the south side of the property and following River Road to the east, the path links to the County Route 94 Bike Path continuing east along the south fork from Hampton Bays to Montauk State Park.

The trail utilizes the perimeter road that was once used by Grumman Corporation personnel for security during its more than 40 years of operation. Enterprise Park is adjacent to an existing 491-acre industrial park and future commercial uses once a subdivision is completed by the town on the remaining acreage available for private investors. The park’s continuing redevelopment is expected to result in economic investment and employment as it will be attractive to companies to be near amenities that promote a healthy lifestyle to employees. It will foster community revitalization by allowing residents and tourists to partake in recreational activities, such as walking, running, hiking, bird watching, inline skating and cycling in a safe, organized environment.

Parking is available in Grumman Memorial Park (located at the intersection of route 25 and 25A), Isaac Dog Park (off Route 25, east of Wading River Road), and Veterans Memorial Park (5789 Middle Country Road).

Awesome trail. I consider myself a novice rider and I found this trail very enjoyable. There was the perfect amount of challenging areas on the trail...would highly recommend this trail to all riders

Awesome trail. I consider myself a novice rider and I found this trail very enjoyable. There was the perfect amount of challenging areas on the trail...would highly recommend this trail to all riders

Just a mile or so due North is another EXCELLENT off-road biking destination: Wildwood State Park on Long Island Sound. 700 undeveloped acres of mountain biking and hiking trails open to the public.
https://parks.ny.gov/parks/68/details.aspx

Paved path of just about 8.5 miles (all off the regular roadways) provides a great pathway for all skill levels. Beginners can take a leisurely ride with gradual inclines or more experienced riders can challenge themselves with speed and cadence. The path is completely free of roadway dangers as it is only open to walkers, bikers, skaters, etc. It has quite a bit of shady areas to stay out of direct sun due to its location near the woods. Some nice natural scenery. Start/end point located near Veteran Memorial and Isaac Dog Park for other points of interest.

Summer 2018: They finished paving over 8 miles. It’s a wonderful way to get fresh air and exercise with your kids without worrying about traffic. Pick up trail at eastern driveway at Veterans Memorial Park/Isaac Dog Park in Calverton. Bring water—or cut across Route 25 at Stony Brook incubator site (near intersection of 25 & 25A) and ride up to Bean & Bagel Cafe for refreshments.

They've just finished paving the trail and it's super. It's the same initial 5K of paved bike path as before, but now it continues down to River Rd and then to Grumman Blvd. You can turn north on Line Rd. to cross the site and complete the loop. 8.75 miles. The paved trail along Grumman Blvd. continues for a ways to the west beyond Line Rd., but then just stops. Perhaps they are planning to make a loop around the whole site? Or maybe they just had extra asphalt.

NOT A WELL MAINTAINED PATH

This trail should not be advertised as an 8.5 mile trail for walking. The first section is paved and well maintained. After the paved path ends, you are hiking through tall grass and often you question whether this is really a path or if you are actually trespassing. It usually feels like you are trespassing and blazing your own trail. Eventually, my wife and I abandoned the path when we came upon River Road and a hole in the fence. It was not worth the hassle to try to keep blazing our own trail. The dead, decaying deer in the middle of the path sealed the deal for us. We found our own way back through Enterprise Park. If this "trail" is intended as a publicly owned and maintained walking path, then it is falsely advertised as such. The path is probably great for mountain bikes if you enjoy pedaling through tall grass. AVOID UNLESS YOU KNOW WHAT YOU ARE IN FOR.

Unless I was badly mistaken and mis-directed, this trail is paved only part-way, along the north side

The 3.5 miles on the north perimeter is a great paved pathway, as described. However, the pavement ends abruptly in the northeast corner of the "loop" shortly after turning south. While continuing along the perimeter fence, the trail slowly degrades into tall grass tracks with an occasional "sandtrap" and fallen trees to circumvent. Along the south perimeter we paralleled the old railroad for several hundred yards and then skirted a locked gate to proceed onward to the Enterprise Avenue through the repurposed airport hangars.
So it was an unexpected off-road adventure. I was expecting a paved loop, based upon the map.

Not a rail-trail because it uses no portion of the LIRR spur that went into the Grumman plant. The tracks are still in place and still active (or at least are intended to be active). Still, it crosses the railroad, so there's something for the railfan.

This is a hidden gem that will soon result in a safe, protected 8 mile plus trail.