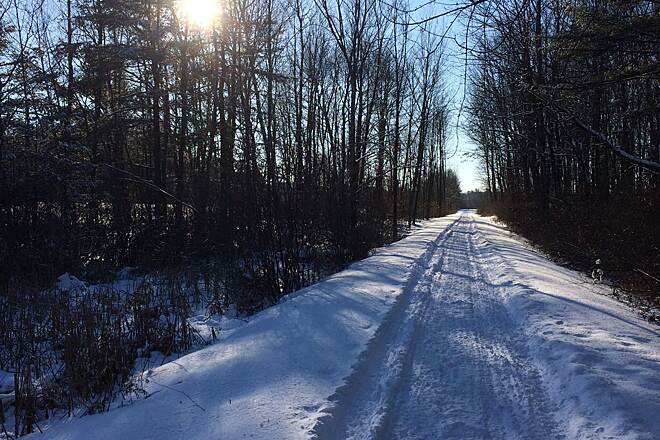 View Trail Map Send to App
The Fonda, Johnstown & Gloversville Rail-Trail (FJ&G) has one main section and one shorter section. The main segment runs for nearly 8 miles between Union Avenue in Johnstown and the intersection of Green Road and County Road 154 (Dennie's Crossing). The shorter, disconnected segment runs for just more than 1.5 miles between Vail Mills and Broadalbin.

The trail follows a portion of Cayadutta Creek on a nicely paved corridor that once was the right-of-way for the Fonda, Johnstown & Gloversville Railroad. The FJ&G served communities from Schenectady northwest and north to the lower Adirondacks. The railroad had its start in 1867.

To access the main segment, parking is available at the northern end (Dennies Crossing). From SR 30A north head east on SR 349 (E. State Street). Turn left onto CR 154 then pull off the road on the right near the gazebo.

To start at the southern end, take SR 30A to SR 67 (E. State Street) and head west. Merge with SR 29 (E. Main Street) then turn right on School Street. You can park along here then head to Main Street where the trail crosses the road.

To start from Trail Station Park, between Gloversville and Johnstown, head for 55 Harrison Street. Parking is on the west side of the road by the playing fields.

To access the Vail Mills–Broadalbin segment, park at the Fulton County Visitors Center, at the junction of State Routes 29 and 30.

The trail was well maintained but there were too many cross walks. Some of the areas were very run down. Shopping carts dumped in the creek and garbage. Buildings falling down along the way. Unfortunately, a sign of the times in upstate New York. Same for my area.

We rode from this trail on hybrids and enjoyed the experience. Was pretty flat with a few spots of incline/decline. The pavement was generally good, with a few spots with bumps or cracks from weathering. There were a lot of road crossings so we had to be careful. Very scenic, we rode thru a couple of towns, and saw a lot of older abandoned factories (Louis Meyer Make Gloves). Seems like a great local resource.

We completed this trail ride in July 2021, two adults and two kids(9 and 8). We were very concerned with the lack of local vehicles not following right of way laws. We became frustrated after only going a few miles(from north parking area into Town of Gloversville) and crossing at 17 different Road crossings. This stop and go was tedious and took enjoyment out of the ride.

It seems as though automobiles have the right of way with many poorly marked crosswalks throughout this trail. If you are willing to surrender the right of way you will enjoy surviving this picturesque trail.

It seems as though automobiles have the right of way with many poorly marked crosswalks throughout this trail. If you are willing to surrender the right of way you will enjoy surviving this picturesque trail.

easy ride, except route 30A.

We did this trail on pas bikes on a summer Friday starting on the Northen starting point. Parking is good. The trail is fairly flat like most rail trails and is asphalt. The pavement is in very good condition with only a few blemishes. There are lots of street crossings but they are mostly side streets that once served factories now closed. Though a motorist did turn left, no directional, nearly striking my wife who was walking her bike in a crosswalk at the intersection in the apposing direction with the green light. Watching cars cross the bike path at very well marked crossings I got got the impression that they do not encounter alot of bike or foot traffic and the cars don't even slow down. Be aware. Except crossing Route 30A, a 4 lane highway. The crossing is clearly and prominently marked to yield to bike and foot traffic but no one stops. Cars where doing 30-55 mph. It's like playing chicken. The crossing needs a pedestrian controlled traffic crossing light like I see at other trails and crossings in NYS. Now back to the trail. It starts of in a rural area passing peoples clean and trimned yards then abandoned factories, thru the city then back to a rural area. It was nice. Someone else mentioned they had seen police patrols in the area. We did too. We welcomed their presence. They were dealing with a man who was dressed in winter clothes on a hot summer day standing precariously on a bridge railing. They talked him down and away we went. We had lunch in downtown Johnstown, lots of choices there. There are no restrooms on the trail but there areaa few gas stations and a Pricechopper right on the trail that has just about anything you might want and clean restrooms.

The trail is straight and level. Pavement is in good shape. Most of the trail is in the shade of trees in the summer. Lots of walkers, but they will move over if they hear you (use a bell or horn). Also a lot of dog walkers during the Tourist Season. Beware of doggy landmines.
The longest section is 1 miles. The other half mile is a scarey crossing of Route 30.

Across the road from the Information Center is a Dunkin Donuts. Good place to have coffee and wait for a friend or use the Rest Room.

The east end of the trail has a Stewarts. That gives you a Rest Room and some healthy snacks, water, and drinks.

Lots of parking at the Information Center.

I rode this trail for the first time yesterday and have mixed feelings about it. I found it disturbing that there were so many police cars driving on the Gloversville end of the trail and there were way too many street crossings. On the other hand I did enjoy riding along the creek and seeing the big abandoned factory buildings in Gloversville. The history to all those buildings must be amazing. Frequent stops interrupted my riding and made me slightly nervous riding through so many neighborhoods as I wasn't sure who I would encounter with the passing of 3 police cars. Well maintained.

This was my first time triking on the F,J&G trail. The trail is well maintained and has many things to see that make it interesting. My favorite section is at the southern end where the trail parallels a stream set in a gorge. That section is wooded and has nice views. Many reviews say that there are many street crossings. That is true but I didn’t find that onerous. My only complaint is the lack of public bathrooms which is becoming more important as I get older. There is a Price Chopper next to the trail which makes for a nice stoping point for bathrooms and food.

This is a very nice paved asphalt trail. There is a little more ascent going North (johnstown to Gloversville). The only drawback is the amount of street crossings. Still, well worth doing!

I have biked this trail every year for many years. My wife drives shuttle so I only go one way downhill. I don't find the many road crossings a problem. In Gloversville some of the curbs are high. Two items of interest are how Cayadutta Creek starts so small and ends up quite a stream. Secondly you pass many old abandoned factory buildings from the glove trade. At the end in the Industrial Park there is hope for the upstate economy in the form of the several large factory buildings. Youker

I love going on this Trail. Weather walking, biking, roller blading, dog walking, or XC ski during the winter....this is a very nice trail.

One of the truely nice places for people living in J'town & G'ville. I have guest from time to time from all over the World who stay with me and they have all enjoyed the trail on the times we have gone.

Yes the trail has it's faults and could be improved here and there...but over all it is a very nice trail.

We biked this 8 mile trail on a Sunday. It was fairly easy with only a couple of intersections that we had to stop at to allow for traffic to clear. We parked at the north west end of Gloversville. Crossing Rt 30A will slow you down as will the other crossings in G'ville. We passed a few parks and followed the creek down to the southern most end. Pedaling back was harder but not difficult. Will probably do this trail again in the fall. Should be nice along the southern end near the gorge.

I could not find a sign directing where the trail was, Only trail crossings. Many trail crossing, several had a hard transition. I expected some information about the trail when I got there but there was nothing anywhere. The trail itself was a decent Paved trail for local residents it would be it is a good trail but in my opinion not worth traveling too.

My husband and I have been on this terrific, 8-mile trail twice. Although there are some roads to cross and not all the curb crossings are smooth, the trail is a good one. The southern end runs along a deep gorge which makes you think you are in the Adirondacks.

I did this very nice smooth asphalt trail in late August 2008. The north end starts in a small park at the junction of Rts 349 and 154 known as Dennies Crossroads a bit northwest of Gloversville. It ends about 10 miles later at Union Avenue south of Johstown near an Industrial Park. Most of the trail runs along Cayadutta Creek and at the south end above the gorge of the creek throught the woods. The Gloversville section is in town and there are many road crossings but not a problem as it runs by old glove factories. There is parking at both end and in the middle. A brochure is available from the Fulton County Chamber of Commerce in Gloversville. 800-676-3858 Bob Youker

"Good trail, but many road crossings. At some crossings there are high curbs. Asphalt was very well maintained and trail was clean"