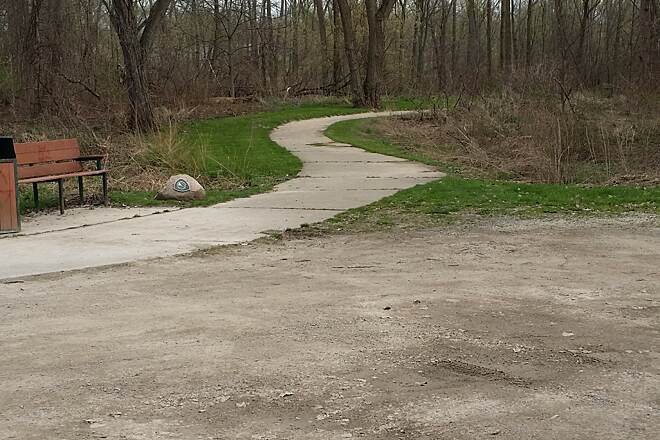 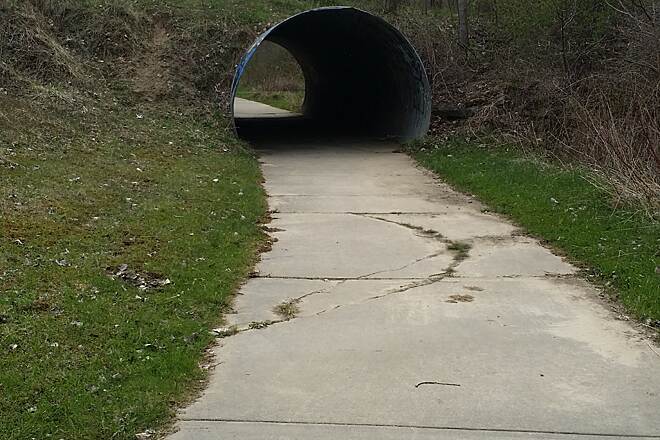 The George Atkin Jr. Recreational Trail winds along scenic Pine Run Creek in the City of Clio. From a hub downtown at Clio Park, the paved trail branches out through the city, providing access to a number of businesses, residences and amenities.

The trail is constantly maintained by the city, allowing for year-round recreational and active transportation use. Tunnels and bridges provide safe crossings of major roads, allowing trail users to peacefully experience the surrounding woodlands uninterrupted.

At Field Road, the trail continues north through Vienna Township along a former interurban line as the Trolley Line Trail.

Parking for the George Atkin Jr. Recreational Trail is available at Clio Park on N. Mill Street in downtown Clio. Additional parking can be found at trailheads on Neff Road, Wilson Road and Jennings Road.

We enjoyed riding this trail, but you have to watch out for uneven spots.

Good but not Great

The George Atkin Jr. Recreational Trail is a nice little trail, but as the previous two reviewers had mentioned, is quite rough. There are many cracks in the pavement that you need to be careful, throughout every portion of the trail. Most have been spray painted to alert users of the danger, but even still it's hard to see. I'd recommend the trail to cyclists, but if you are a roadie, I wouldn't necessarily bring my best bike. A hybrid or any bike with larger diameter tires is best suited to handle the terrain of the aging trail.

With the negatives out of the way, the positives are quite nice. The engineering of the trail is outstanding. There are signs at ever spur in the trail and all parts of the trails avoid roads, bypassing M-57 (Vienna Rd) and Mill St. in Clio and the railroad tracks just as it connects with the Trolley Line Rail Trail/spurs towards the Business Park off of Vienna.

Terrain-wise, For those who want a good workout with elevation, the trail provides some nice little climbs, mostly heading south towards Wilson Rd. The trail is very wooded, basically like riding/walking/running on a trail through the woods. In some spots the trail is quite overgrown, but never enough to not have a path on the trail. Some of the spots on the trail are apt to be muddy or have a tiny amount of water going through it. It's never enough to make it impassible but might make you wet if your bike tire splashes it up! There is a small spot where water runs over the creek, near the Church and near Vienna Rd. Again, it's never impassible but you should probably slow down through it.


Length-wise, with the connecting Trolley Line Trail, I was able to get about 12 miles into it taking all of the spurs but, missing out on probably 3 or so miles on the Trolley due to it being closed about 1.5 miles from it's end point. (as of August 2017)

The trail has always been lightly used when I've been on it. I've never saw more than a handful of people in the numerous times I've walked or rode it.

To summarize, it's a good trail that is showing it's age. You can get a nice little workout and it gets you to most businesses and places in Clio. If you live in Mt. Morris or just outside the Downtown portion of Clio you could ride the trail into the city, to run errands as the spurs give you great access to many important portions of the city. Be safe, don't ride at extremely fast pace and keep your eyes on the trail (for the cracks) and you should have a nice time and get back in one piece.

The trail has several branches out of the park in Clio. The path is paved, but cracked in places so you need to watch your step a bit. The path follows a stream and is pleasantly shaded. Running in 95 degree heat, the path felt very comfortable under the shade and near the water. Going down each branch lets you have a nice 6 mile run in total. None of the branches are very long unless you take the connection to the Trolley Tail north, which is a different experience all together.

If you are looking for a nice 3 to 6 miles, I recommend this trail.

Not really a good trail

It looks like at one point it may have been nice, but half of it has been under construction for quite some time now and you can't ride a good chunk of it, and it is not well maintained. WARNING TO ROAD BIKERS: Do NOT ride this trail after a rain. Very slick mud washes onto the pavement and will cause you to wipe out. There are very easy fixes for this but the city will not fix it (assuming it's due to cost). Overall rating: I will not recommend this trail to anyone unless you are already in the area and wanting somewhere to ride (with a mountain bike)