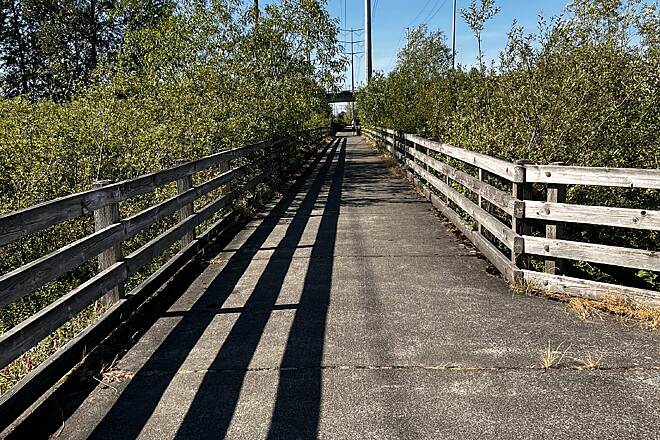 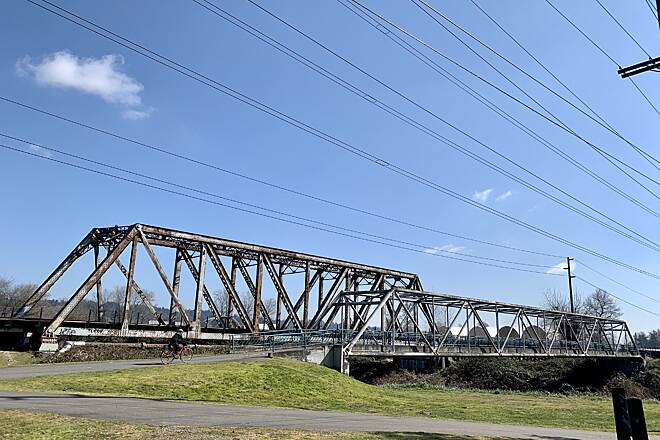 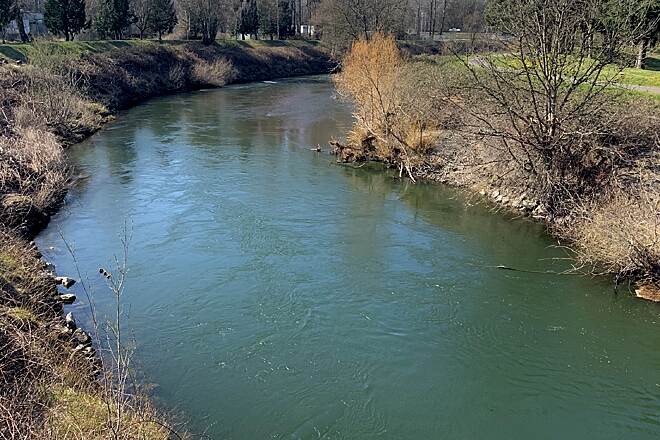 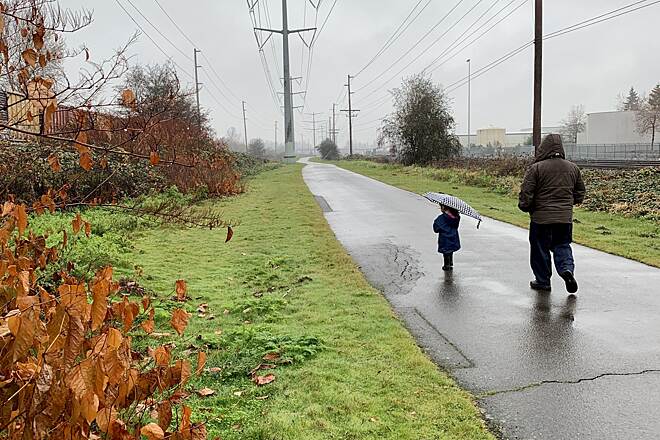 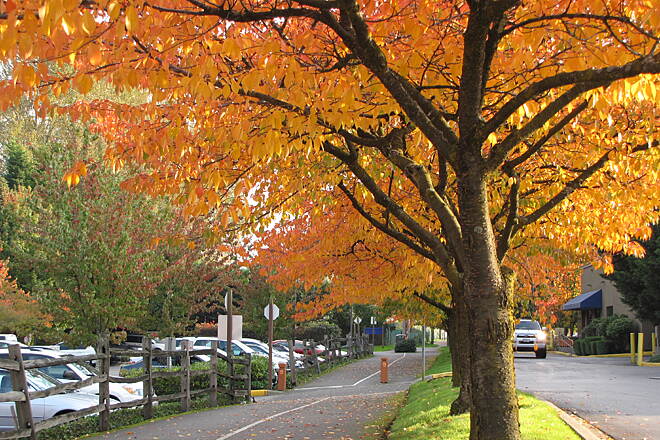 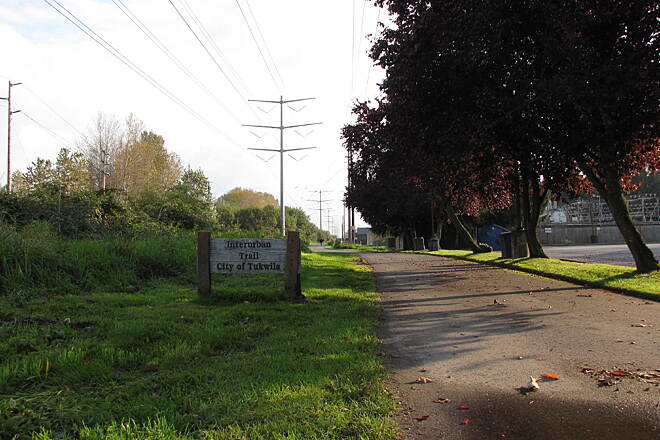 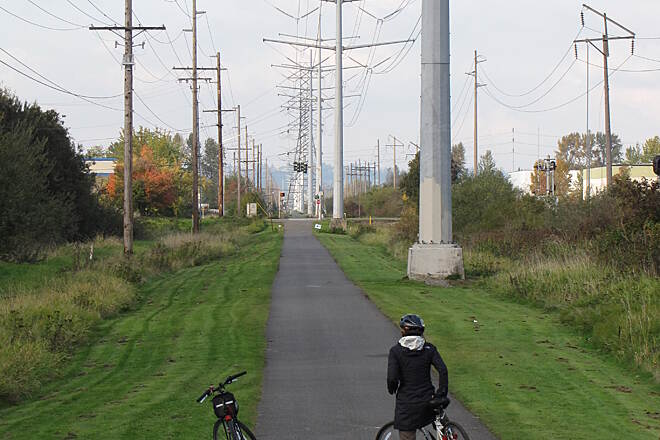 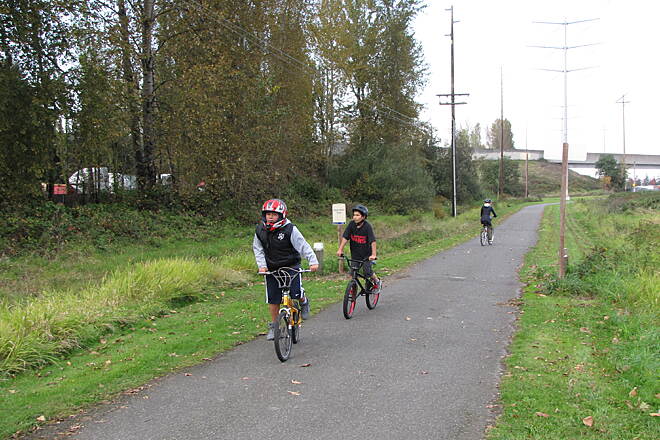 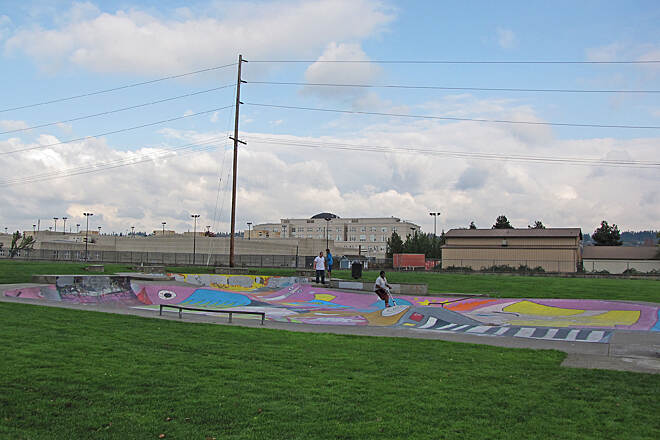 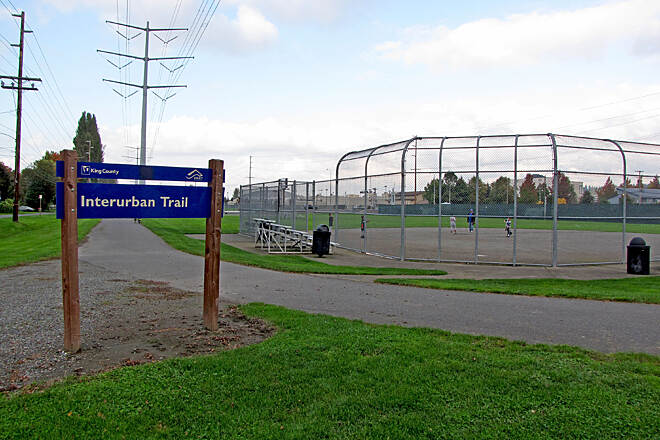 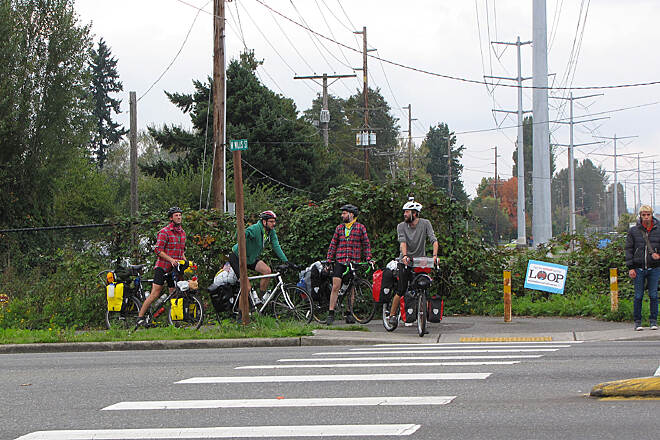 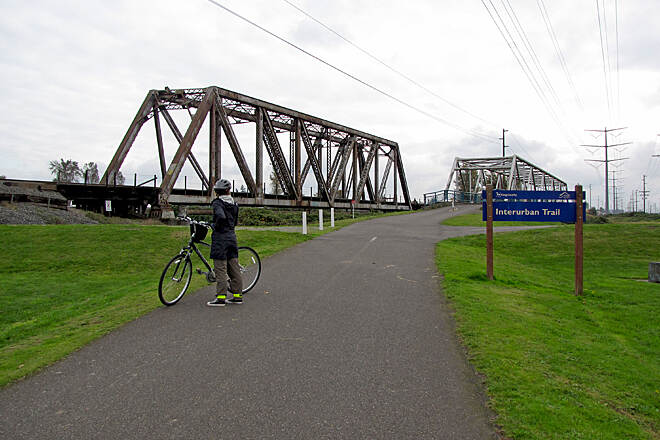 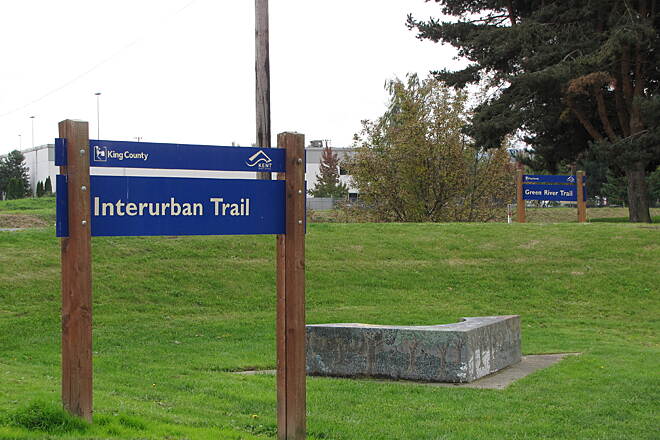 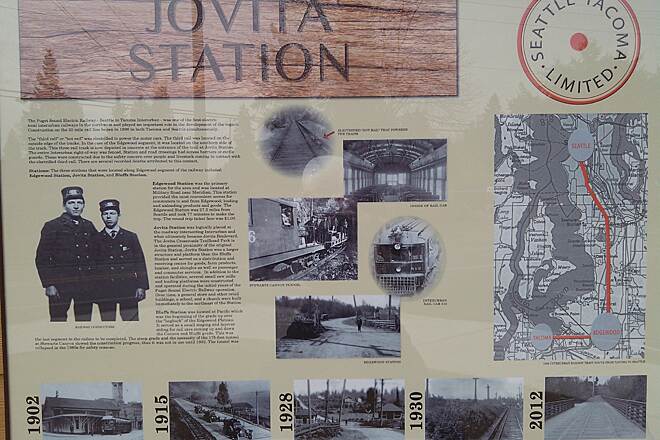 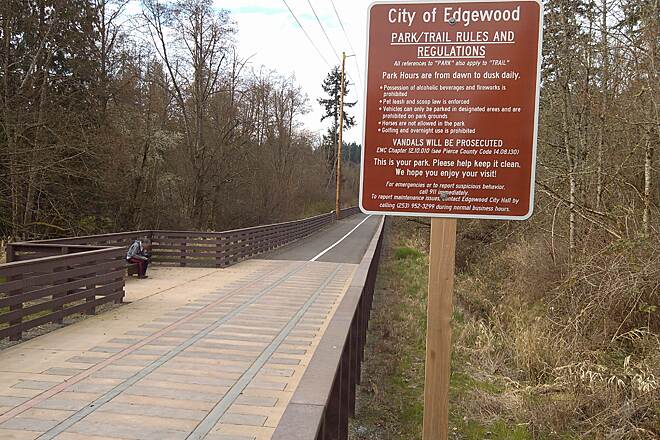 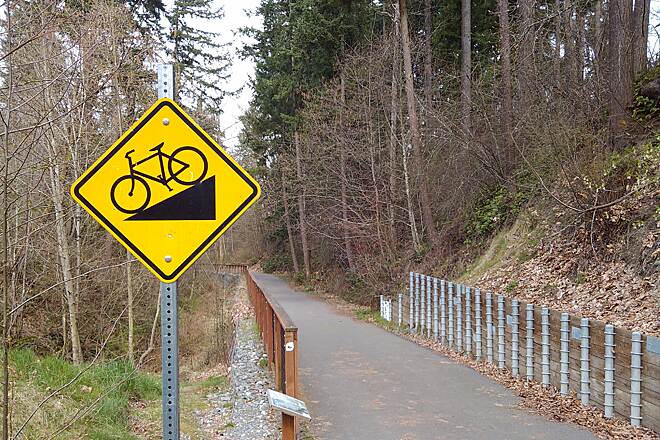 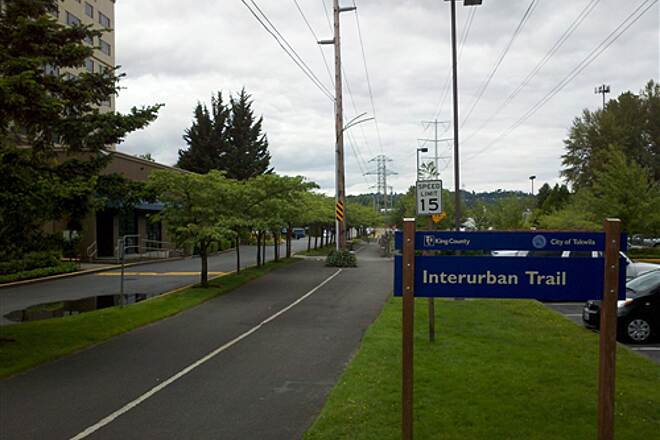 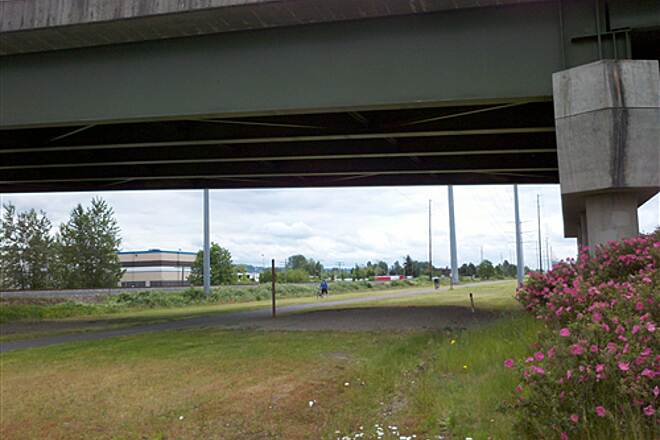 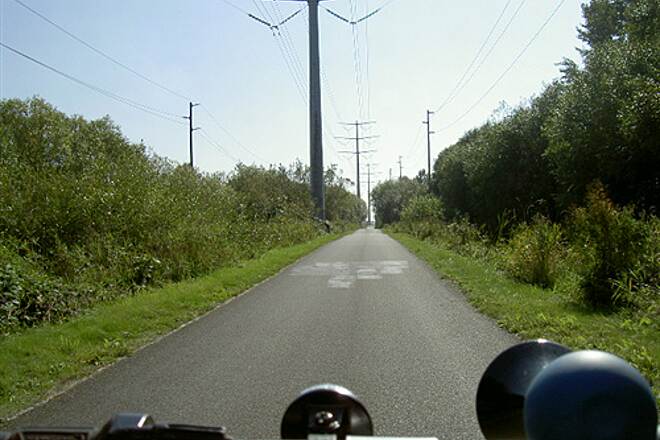 The Interurban Trail (South) connects several towns south of Seattle along the historic route of the Puget Sound Electric Railway. The trolley ran between Tacoma and Seattle from 1902 to 1928, falling victim to the growing popularity of cars and trucks and the construction of State Route 99. Its cousin—now the Interurban Trail (North)—ran between Seattle and Everett and survived until 1939.

The 19.1-mile trail runs nearly straight and flat for 15.8 miles from its beginning in the north near Fort Dent Park. The route connects the towns of Tukwila, Kent, Auburn, Algona, and Pacific, making it popular with commuting bicyclists. Two unattached segments in Edgewood and Milton follow the old railway corridor toward Tacoma.

Starting at the parking lot at Fort Dent Park, follow the River Trail signs across a small bridge, and take the Green River Trail to the Interurban Trail intersection. After crossing under Interstate 405, the paved trail rolls alongside the BNSF Railway and beneath Puget Sound Energy power lines on steel utility poles that march south for miles. The route passes sprawling commercial and light industrial areas in Tukwila and Kent with access to employers and shopping malls, though the trail avoids the hustle and bustle of the congested roads.

Drainage ditches account for natural habitat next to the trail and provide nesting for ducks and marsh birds. On clear days, 14,410-foot Mount Rainier is visible to the south. After passing the outskirts of downtown Kent, the Interurban Trail meets the Green River Trail again. Following this path to the right provides a winding, 11-mile scenic route back to Fort Dent atop a river levee.

The surroundings become more agricultural after a rail yard (watch for unmanned locomotives), and you might hear a crowd roaring as you pass the Emerald Downs thoroughbred racetrack. The trail passes historic downtown Auburn and then takes its one turn, a slight curve heading to the southwest toward Tacoma. The trail passes backyards in Algona before it ends in Pacific.

The Interurban Trail segments along the ridge look nothing like the older stretch in the flatland. One 0.8-mile section begins at the Jovita Crossroads Trailhead Park in Edgewood, where you'll find a historical railway display. After another gap, the 2.5-mile Milton section descends toward Tacoma through the forested canyon of Hylebos Creek. Long-range plans call for linking the segments, though trail builders will have to find a route up the hogback from the town of Pacific, the former home of the railway's Bluffs Station.

To reach the Pacific trailhead, from I-5, take Exit 142A. Head east on SR 18 for 2.5 miles, and take the W. Valley Highway exit toward SR 167 S. Turn right onto W. Valley Highway, and go 2.6 miles. Turn left onto Third Avenue SW. The trailhead is on the left after passing under SR 167.

its well maintained, straight, flat and the scenery is interesting. and you actually feel like you’re going somewhere.

I like this trail a lot. Not too congested and kept up fairly well. My only warning is a specific raised railroad crossing that was bumpy enough to knock my bike chain loose. I’ll be returning as the weather keep getting nicer.

As a 72 yr old person, I try to walk 4 or 5 days a week. When the weather is nice part of my walk is on the interurban trail through Pacific. Over the last couple of years, the portion between Ellingson Rd and 3rd Ave NE is falling apart. I have to be very careful and not step in a hole and fall.The southern part past 3rd is being extended and is very nice. I just wish someone could check out the before mentioned section. Also, it must be about time to repaint the circles around the holes. The paint is almost worn off.

Green River Trail is very scenic 5 stars. Interurban South is just not as interesting as other Washington trails as it runs straight under power lines. It is a nice quick 7 or 8 mile return trip from the end of Green River Trail though.

We parked at the Porter Way at Park Way parking area below Milton and walked almost 2 miles to the NE where we came out near Meridian and Enchanted Parkway. It's a great trail in good condition that even has a well serviced, CLEAN porta-potty located on the trail just up from where we parked. It's wide and a good portion is in the shade, so on those hot days this is one of the easier shaded trails and so gets a good bit of traffic both pedestrian and bicycles. Our just under 4 mile round trip walk, took about 1 hour and 15 minutes or so...
Everytime I walk a new trail I find myself thinking on how these former railroads or in this case an electric trolley way that ran between Seattle & Tacoma into the late 1920's not only came into existence but on how they were used and went out of business as well. And how fortunate we are as walkers, bicyclists and outdoor enthusiasts that these rights-of-way are now in the public domain, are well developed as paved trails and are now so well used. Eventually they will be connected when possible creating something that could never be done today because of the costs and probably environmental...concerns. So the work that the Rails To Trails Conservancy does is certainly worth supporting, especially when you see the results that have become valuable and irreplaceable public assets like the Interurban Trail South near Milton here...

I enjoyed the ride

While visiting the Auburn area---I rode this trail on 7/17/10 from Foster Park north until it became the "River Trail" (I would guess it is the Green River Trail) just north of The 405. While the scenery north of Foster Park is industrial with a few major street crossings I thought it was a nice trail. I rode back to Foster Park and headed south and when the trees or buildings did not block the view---there was The Mountain in all it's glory. The sweet peas were in bloom, which made a great pix of both. Very nice. The Trail south of Algona to Pacific needs some TLC. lots of gaps in the asphalt with weeds growing through. Still a nice ride. Disappointingly, the Green River Trail (not a RtT, hence not listed here) from Foster Park is closed with giant sand bags. I knew about this before the ride, and it seems the city of Kent is the only city which has chosen to close the trail by putting the sandbags in the middle of the trail, vs the river side of the trail. Enjoy the Ride.

Well maintained and a great commuter trail with vistas of the Cascade foothills and Mt. Rainer. Mostly follows the utility 'right of way' underneath electrical high tension lines. Also, passes through a railroad switch-yard with 'automated' switching engines, be careful !

You cannot go from Alki to Interurban...you have about a 2 mile split with no direction on which way to go

Be careful where you park!

"This is a great trail for beginners, and the going is nice and flat. Although there are parking areas at various points along this trail, there are frequent car break-ins at some of the less-frequented lots (37th NW in Auburn, for example). Choose a lot that sees more traffic."

Nice commute trail...alternate would be green river trail. What would make this a really great trail is to continue on into Seattle and extent to Puyallup!!

What a great trail.

I've started from Pacific and other spots in between and it's a great trail from one end to the other. Even port a potties along the way. Some roads need to be crossed and traffic sometimes doesn't yield but I highly recommend if you like long walks.

Flat most of the time with just one or two inclines over bridges.