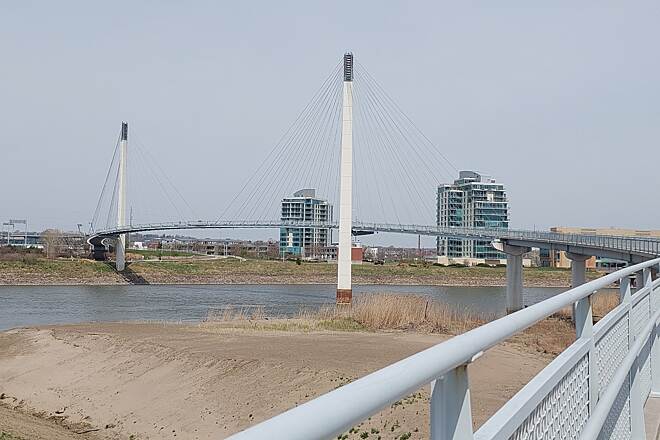 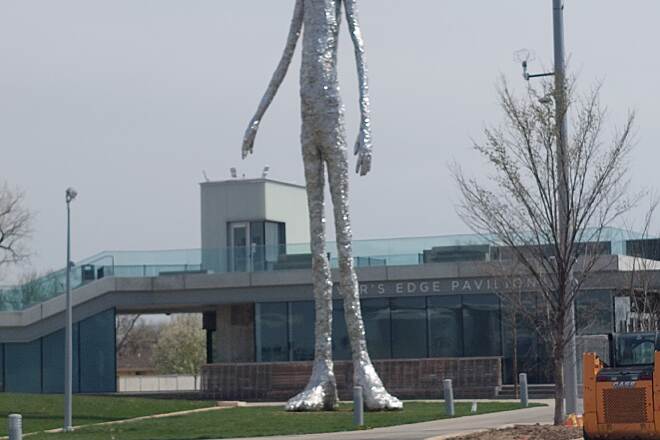 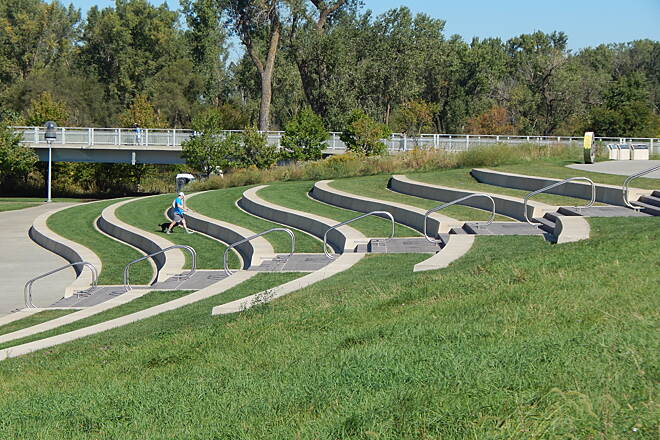 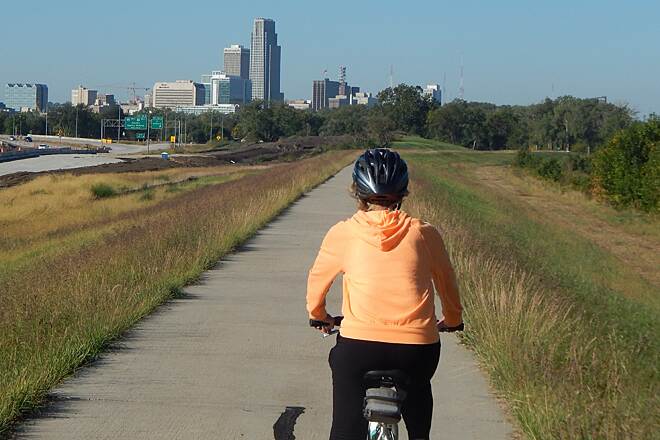 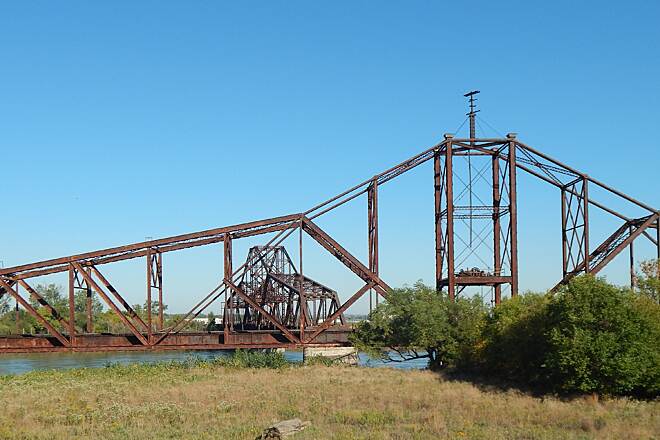 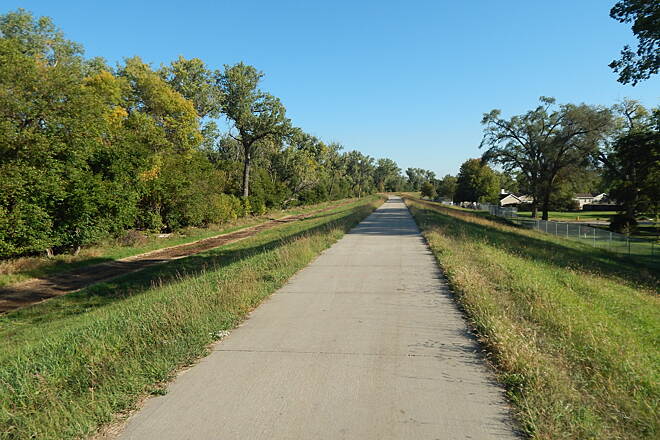 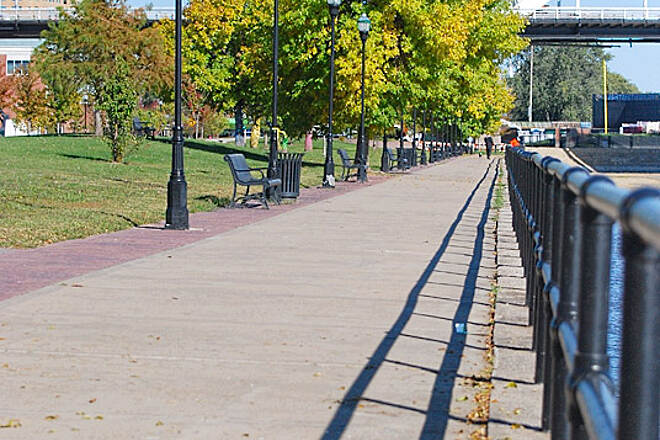 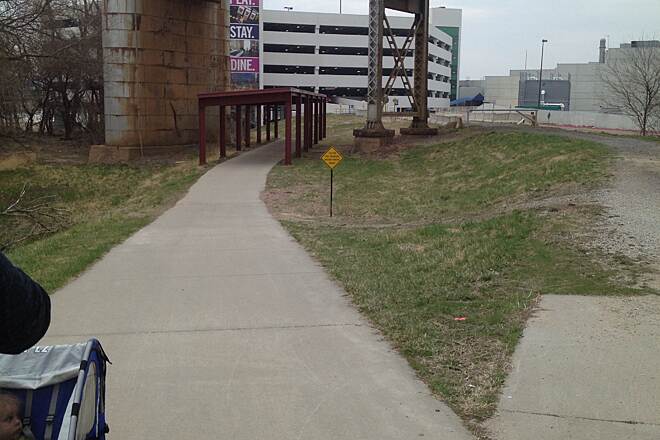 The Iowa Riverfront Trail in Council Bluffs spans the western side of the city along the Missouri River. For most of the route, bikers, runners, skaters and walkers are treated to spectacular views of the skyline of Omaha, Nebraska, located just across the river.

The trail begins in the south at the Western Historic Trails Center. Operated by the State Historical Society of Iowa, the center features exhibits on the various routes west and north for early American pioneers, most of which passed through this part of Iowa. Stop in for awhile and learn about the Lewis and Clark Trail, Oregon Trail, California Trail and Mormon Trail. The Iowa Riverfront Trail directly connects to the Western Historic Trails Center Link outside the facility, which allows trail users to connect seamlessly with many of Council Bluffs' other great trails leading west, south and north.

Continuing north from the Western Historic Trails Center, the Iowa Riverfront Trail crosses under busy Interstate 80 as the highway approaches the Missouri River. A short on-road bike path along a low-use portion of River Road through some industrial properties follows. At the parking lot for the Ameristar Casino on Nebraska Avenue, the off-road trail resumes. The trail passes one more casino (Harrah's Council Bluffs), as well as the Dodge Riverside Golf Club, a public course that in the past has been named one of the best places to play by Golf Digest.

After the casinos and golf course, the Iowa Riverfront Trail meanders through the new River's Edge Park. Opened in 2013, the park features a large irrigated lawn, amphitheater, additional riverside trails and a new parking lot. The public space is framed by stunning views of Omaha and is lit at night.

The Bob Kerrey Pedestrian Bridge begins in River's Edge Park. It currently holds the record as the longest pedestrian bridge to link two states. On the Nebraska side, connect to the Omaha Riverfront Trail for additional trail mileage. The bridge is a regional architectural landmark and is alone worth the trek.

Across from the bridge in Council Bluffs is the former site of Dodge Park Playland. The park opened in 1948 as a dog racing track and later drew crowds as a popular car racing track and amusement park. Although the park closed in 1970, the site is preserved as parkland. The Iowa Riverfront Trail continues north from this site between residences and Friendship Park, another section of wooded preserve.

The trail continues on the levee along the Missouri River until it reaches the intersection of N. 25th Street and I-29. Here the trail briefly cuts south before turning east along Avenue N/Nash Boulevard, where it skirts the edge of Blackbird Marsh County Preserve. At State Route 192, the trail continues adjacent to Big Lake Road. The Iowa Riverfront Trail's northern endpoint is at Big Lake Park, a popular fishing spot.

If you are feeling particularly adventurous, you can continue north from the lake along Monument Road to the Lewis and Clark Monument. The site honors the pair's famous expedition in 1804, and is well worth a visit. Be forewarned: The ride or walk north is entirely uphill.

Parking can be found at several points along the Iowa Riverfront Trail. At the trail's southern endpoint, park at the Western Historic Trails Center parking lot just off Richard Downing Avenue. Farther north, the Ameristar and Harrah's casinos both have large parking lots, as does the Dodge Riverside Golf Club. Be mindful of any parking restrictions that may be in place.

A large parking lot is also available in River's Edge Park near Interstate 480. The lot can be accessed via a park service road from the Harrah's parking lot. At the trail's northern endpoint, parking can be found at Big Lake Park on Big Lake Road.

The Historic Trails Center at the southern end of the trail was not open when I did the trail in mid Sept. No parking available. However, lots of parking available at the Council Bluffs Recreational complex about 1/2 east on the same road and there is a nice bike trail that connects to the Riner Front Trail.

The Views of the Downtown Omaha Skyline Are Nice

On a glorious Sunday morn in early October, my wife and I crossed the Bob Kerrey Pedestrian Bridge from Omaha into Council Bluffs to experience the Iowa Riverfront Trail.
On a vacation from Southern California to ride our bikes in ten states, I'm sorry to report that this trail was nothing to write home about.
In all fairness, the bridge is awesome, the Tom Hanafan River's Edge Park and amphitheater area with it's large grass area, trees and sculptures is pretty cool, and there are some awesome views of Old Muddy and the downtown Omaha skyline, but that's about it for highlights. As soon as you start riding in either direction from the bridge, it becomes somewhat disappointing.
After ignoring the temporary "Keep Off the Trail" sign and barrier , we headed upriver. It was OK with some pleasant Omaha views, but felt a bit sketchy when entering a woodsy area with obvious remnants of some homeless camping. Try to ignore the speeding cars racing by on the freeway.
Going downriver from the bridge was discouraging too. It's not especially picturesque, but you do get to ride through the parking lots of a couple of casinos!
I will concede that at least this is a great, well maintained, flat trail for the locals to work out on.

I rode this trail using the Heartland B Cycle system (Omaha and Council Bluffs; there is a station right on the trail where it intersects the John Kerry Pedestrian Bridge).

The surface was in decent condition except for a detour at Harrahs casino. Limited Omaha and Missouri River views.

The Western Trails Interpretive Center at the southern end is worth a stop.

Not the best for walking

We took the trail from Big Lake Park and went South just past Ameristar Casino (6 miles) and then turned around and headed back to the park.
While some areas were quite scenic with views of the Omaha skyline and Bob Kerrey bridge, other areas didn't offer much more than a view of the interstate.
While biking on roads traveled by cars as well may not be much of an issue, walking those same areas was a bit uncomfortable.
A trail map at Big Lake Park would have been helpful as we were not 100% sure which way to head out of the park to follow the trail. A paved portion of the trail does not begin until after passing under a low rail road bridge.