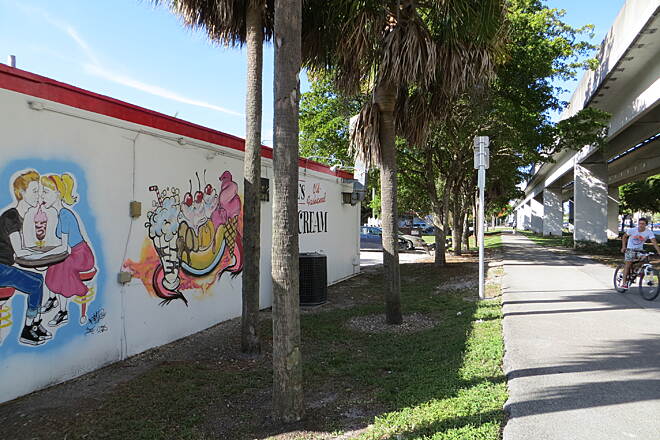 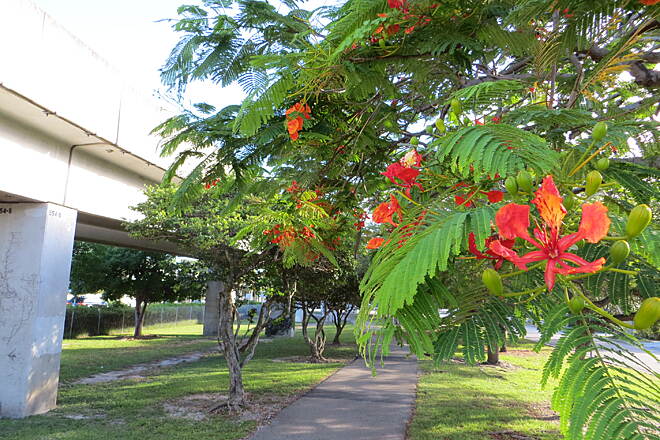 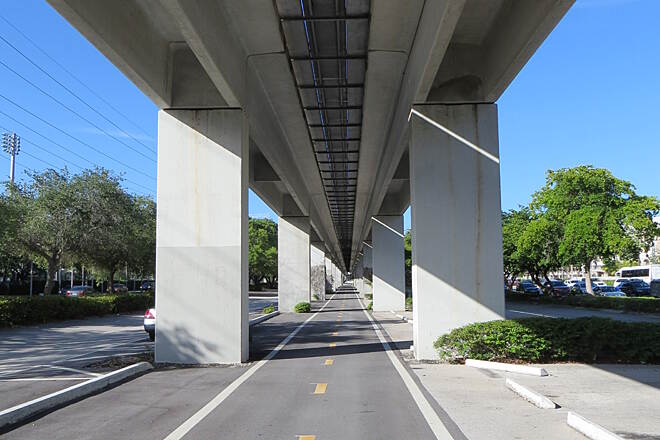 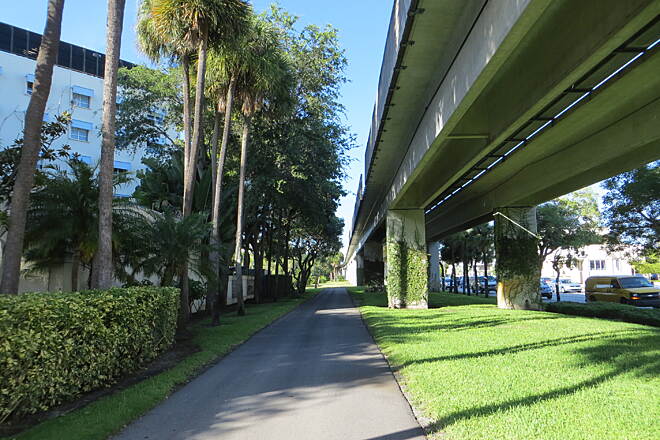 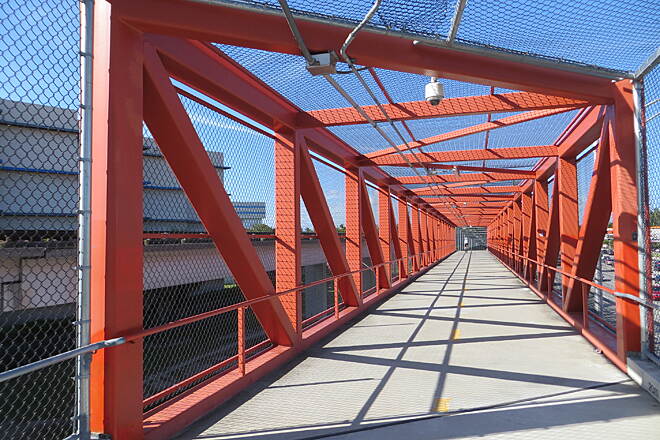 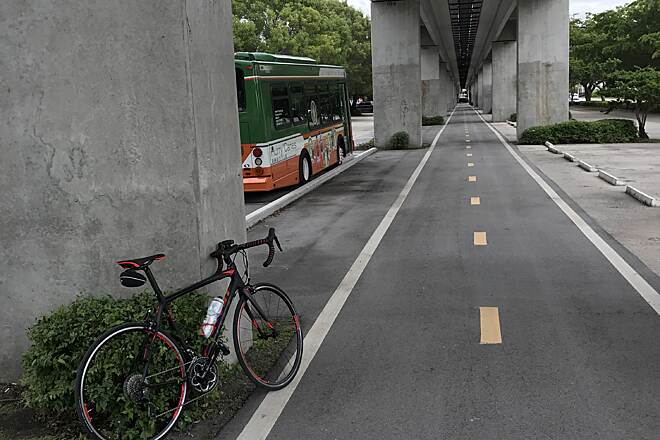 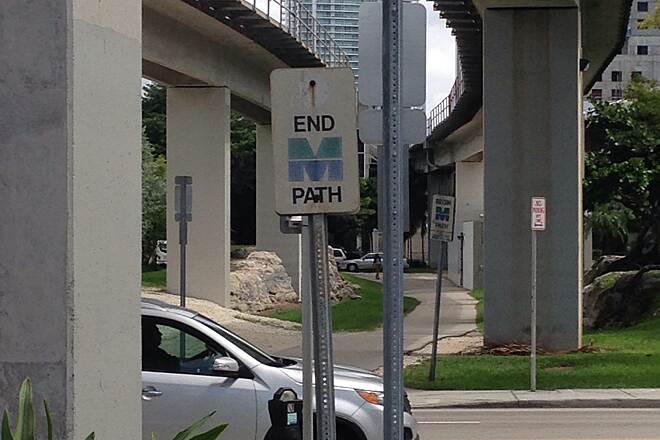 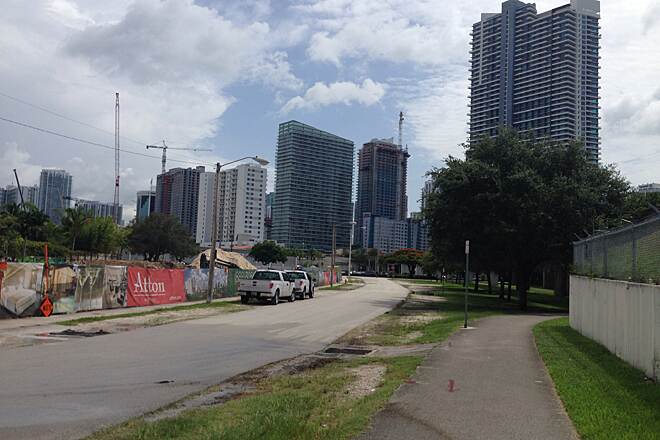 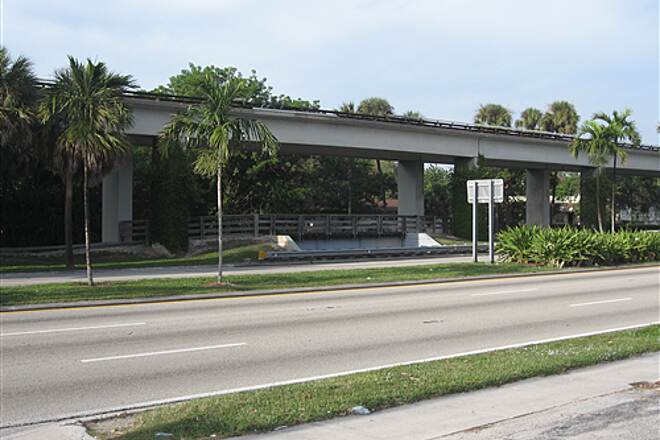 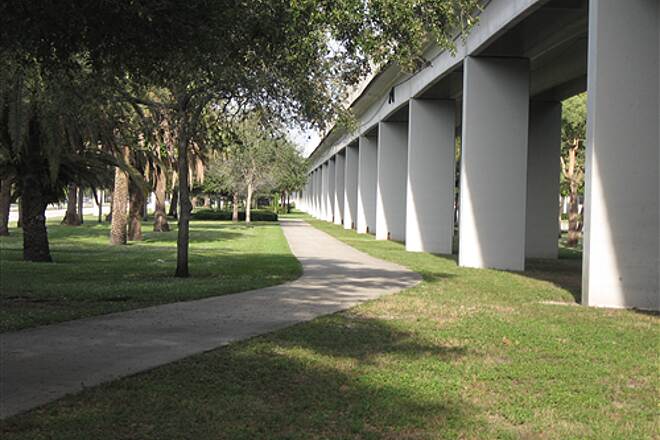 View Trail Map Send to App
The M-Path is a paved multi-use trail in urban Miami-Dade County, which was opened in 1983 and is part of the Miami-Dade Transit (MDT) system. The trail follows a MDT right-of-way under the elevated Metrorail guideways.

The M-Path is one of Florida's oldest rail trails built atop a portion of the fabled Florida East Coast Railway (FEC). In 1896 Henry Flagler's railroad reached downtown Miami, and in 1905 he began an extension of the railraod to Key West, completing it 1912.

The M-Path generally follows US 1 (South Dixie Highway) and crosses 28 roadway intersections. The path connects the Metrorail stations of Brickell, Vizcaya, Coconut Grove, Douglas Road, the University of Miami and Dadeland South. Just north of the latter station (at Kendall Drive), the paved path continues south as the South Dade Trail, all the way to Florida City. The entire route forms a 31-mile corridor.

Good length but not good for a road Bike.

Hard to recommend as a fun ride

We did the southern half of this trail on electric unicycles. The two big downsides of the trail are the many, many street crossings and the poor quality of the pavement. On an electric unicycle, electric scooter, One Wheel, etc. the ride is too bumpy to get much enjoyment out of it. The path is lined with trees which is good for shade, but the roots of those trees create sharp ridges in asphalt or broken concrete slabs. Just when you get up to a fun cruising speed, you hit the bumps. In some cases, those bumps are very hard to see in the mottled shadows cast by the trees. This would be less of a problem on a racing bike or mountain bike. I would definitely NOT recommend trying to use it for inline skating or electric skateboards. The bigger your wheels the better.

We only ended up doing half the trail because we spent half our time waiting at stoplights. There are _so many_ road crossings. So you ride for a minute or two, then wait a minute or two at a light. Our average speed was half what it normally was.

Following the trail is also a challenge. The "trail" often spits you out into a rail station or parking lot, and you have to hunt around for the trail again. We also encountered quite a bit of construction and had to take to the streets to get through some sections.

I'd give this trail two stars, except it has nice moments now and then--large elevated walkways above the street, or speeding through huge columns that support the train above.

Good for exercise or commute / use the train. Not for “family fun”

Great for commuters, not so much for leisure/workouts

Here's why it sucks for leisure and exercise: It crosses many busy intersections, you may "lose" the trail in one or two sections due to poor signage (but I didn't have quite the problem with this aspect that others did), south of the South Dadeland metrorail stop it gets pretty sketchy (i.e. Don't go there after dark. Ever.), lots of bums doing their bum-thing along the trail even in the fancy areas of Coral Gables, you're right on US1 so you're pumping your lungs full of car exhaust, cars honking, running through the metrorail stations because that is where the path goes.

Here's why it's not so bad:
Every single intersection I've come across has been well-marked and (mostly) safe (if you obey the law when it comes to yielding to traffic). Also, the pedestrian walk/don't walk lights are automatic, so I like that you don't have to push each one and wait for it. The trail is very wide and generally well-maintained. Surprisingly, drivers are slightly more cognizant of pedestrians along this trail than in most other parts of Miami. The areas north of the South Dadeland metrorail station are relatively pretty (for being along a major roadway) and seem quite safe. Using the trail very early in the morning (or perhaps very late at night) will allow you to avoid a lot of the car-related issues and the awkwardness of running/biking through the metrorail stations. Even if you lose the trail for a quarter mile or so, it is pretty easy to pick up again after you get around whatever obstruction it was that diverted the trail (like the South Dadeland metrorail station).

I agree with all the negative comments on this page. This path is difficult to follow, poorly lit, in case you need to get to work before sunrise or after sunset. Add to that that Miami is a bike-hating, angry community of very bad and discourteous drivers and voila! Keep your eyes open.

I have been trying to get the City to provide a useable map. The difficulty of navigating the entire trail is the main problem.

Bottom line: it's not a "trail". It's a very very valuable commuter path, and more valuable as a political statement: as you sit in stopped traffic on US1, you should look to the side, where you will see a bike trail and the M Path! What?!? Why are so many people sitting in their cars and swearing, when every possible alternative has been provided, along the exact same path. Wow. Open your eyes people.

I use the M path to ride to/from work. It is mildly better than riding on Dixie. Cars seem to always come close to hitting me as I make one of the many crossings. Unless you've ridden the trail before, you often can't see where the trail picks up again at an intersection. My speed when I ride is normally 19-20mph, but including all the intersections, I'm lucky if I go 14mph all told.

some nice views at the end !

All in all it was a very fun ride. There are some spots at intersections where it isn't clear exactly where the trail picks up again, but there is almost always a sign to clear that up which is nice. There are many intersections to cross and just be aware that Miami drivers are the most oblivious in all of Florida if not the southeast so be careful. Had a blast

a good way to / from downtown

This path isn't scenic or quiet by any means. It runs right along always-busy US1. There's quite a few intersections to cross, mostly at traffic lites. Watch out there!

On the upside, it's the *only* path from SW Miami to the Brickell area. And theres some shade since it goes underneath the elevated Metrorail, a nice benefit. We use it often.