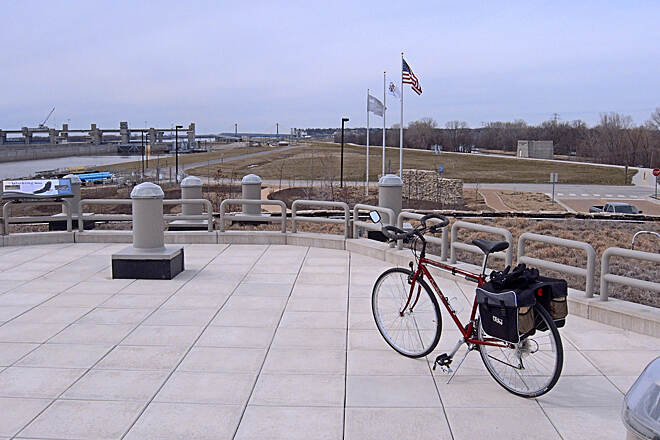 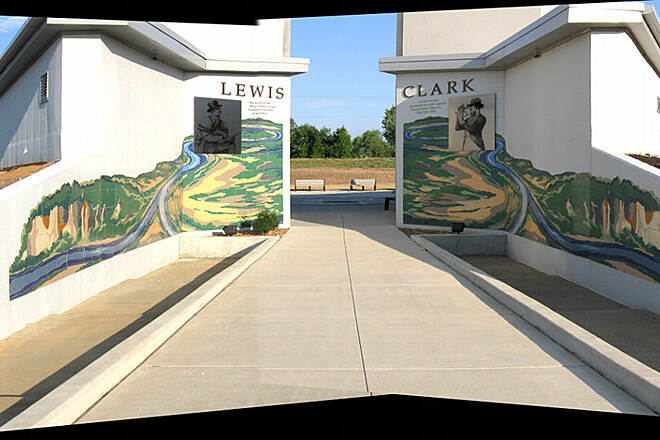 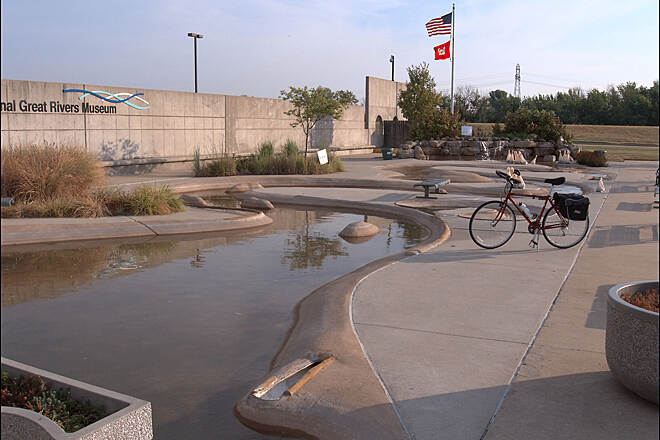 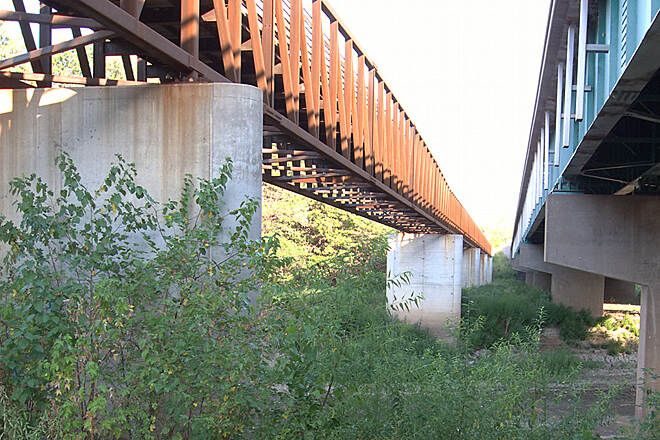 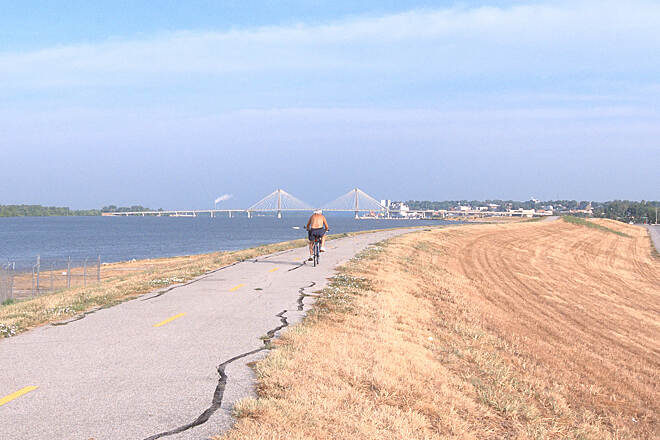 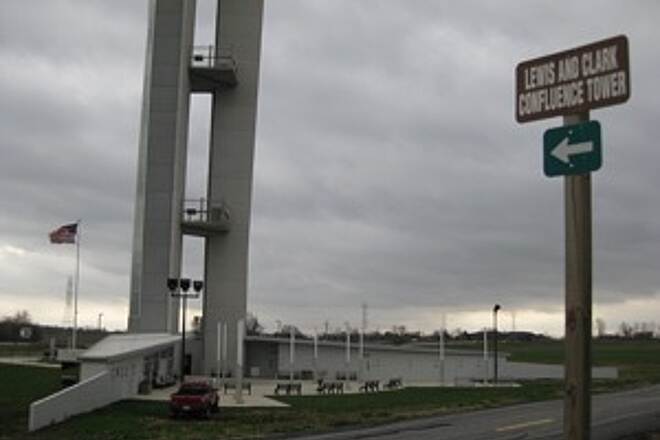 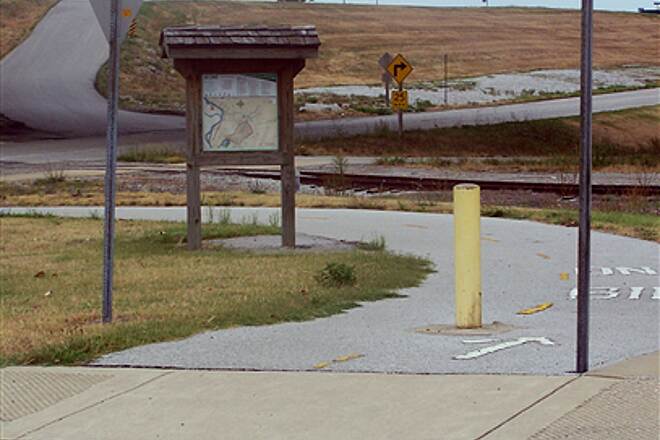 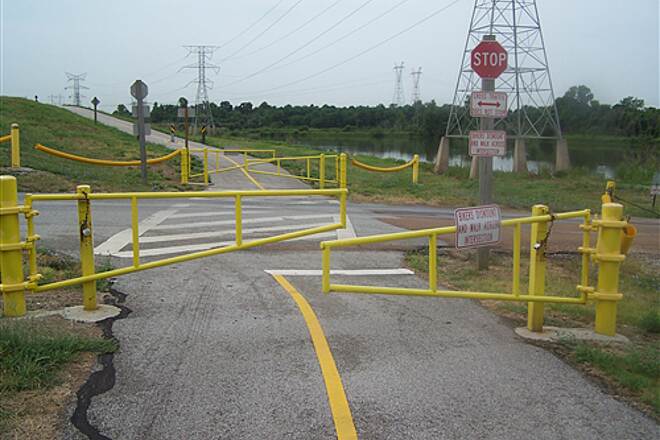 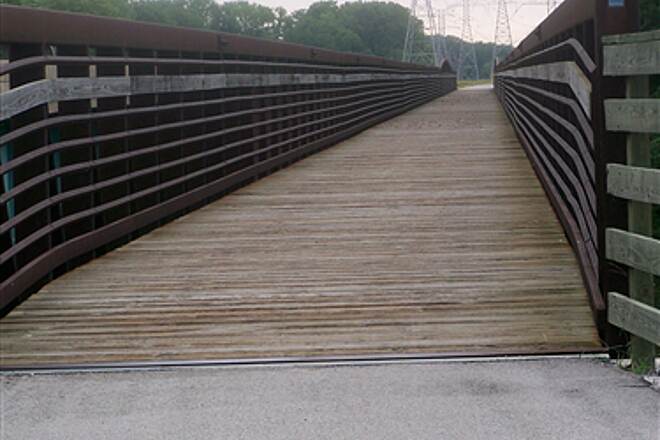 Closure Notice: A roughly two-mile section of the trail, from the McKinley Bridge to E Street in Venice and Granite City, is closed due to construction on the Terminal Railroad Bridge project. The closure is estimated to last at least until the end of 2021; please consult with the MCT Trails website for the latest updates on closures.

Bring your camera to the MCT Confluence Trail. Part of Illinois' Madison County Transit (MCT) bikeways network, this trail is a photographic patchwork of rivers, bridges, waterfront wildlife and industrial cityscape. The trail starts at Russell Commons Park in Alton and curves south, mostly along the Mississippi River levee to Granite City, offering spectacular views along the way. It supports both walking or biking, with a smooth asphalt surface along some stretches, oil and chip seal along the levee by the canal, and rougher gravel surface along other segments.

Leaving the town of Alton, the trail maintains an elevated position so that you will be able to see the highway on your left and the river (and the state of Missouri beyond that) on the right. Heading south, after 1.5 miles, look for the Skinney Island facility, which has locks and a dam and offers great opportunities for taking photos. Soon after this, you arrive at the Amoco facility, with its series of five gates and hills that force cyclists to dismount and walk through them. There are also small hills associated with each of these gates. Be prepared to mount your bike and immediately pedal up the incline.

In the town of Hartford, the Lewis and Clark Confluence Tower appears along the left side of the trail, about 7.5 miles south of Alton and 0.75 mile from the Lewis and Clark Museum. The observation decks, historical displays and museum make for a great diversion.

In Granite City, the on-road connector takes you along Highway 3 for 3 miles west to the historic Chain of Rocks Bridge. Today, the bridge is reserved exclusively for pedestrians, bicyclists and skaters. Historically, however, this bridge served as the Route 66 connection between Illinois and Missouri. The unique St. Louis skyline welcomes you on the far end of the 1-mile bridge.

Back on the trail heading away from the Lewis and Clark Interpretive Center, you come to the limestone-covered portion of the trail that parallels the Chain of Rocks Canal for 6.5 miles. Turn left on Bauer Road and continue for 0.25 mile until the trail picks back up again. For the next 1.75 miles, the trail becomes more urban and ends abruptly at the intersection of Illinois Route 3 and W. 20th Street. There is no official trailhead or parking here; however, you can pick up another short disjointed segments by crossing 20th Street and picking up 1st Street, heading south to turn west on E Street. At the end of E Street, the MCT Confluence Trail continues south to end at McKinley Bridge Roadside Park.

This trail has many connections on its northern end, including a link to Missouri's West Alton Trail and a signed, mostly city street route, to Piasa Park, where it meets the Sam Vadalabene Bike Trail. Also from the northern section, you can cross the Clark Bridge in Alton. In Hartford, the trail meets New Poag Road, which offers a 5-mile connection east to the Bluff Trail.

To access the trail at Russell Commons Park in Alton, take State Route 140 west and turn left on Washington Avenue. After 1.3 miles, turn right on E. Broadway Street and continue for 0.3 mile. Make a quick left onto the Broadway Connector, and then travel for 0.25 mile to Landmarks Boulevard; turn right. After another 0.25 mile, turn left on Ridge Street and follow the curving road to the left. The trailhead is on the left in 0.3 mile.

Parking and trail access are also available at the Lewis and Clark Interpretive Center in Hartford and on both the Illinois and Missouri sides of the Chain of Rocks Bridge. For the southern segment, parking is available at McKinley Bridge Roadside Park (off Cedar/Main Streets near Bremen Street).

Rode this trail from Hartford to Alton because it was paved. This is not a good trail compared to rest of the MCT system. A mile or so span around Hartford has large cracks with weeds growing which is dicey. And by the river, it’s very rough from flooding. It’s also not scenic and you get the aromatic smells of the refineries in the area! I had a good workout but don’t recommend.

Rode this today July 13, 2020. Too many stop signs and not paved all the way. Truly disappointed as I was expecting a more pleasant paved trail.

I recently completed the Katy trail and used the MCT Confluence Trail to go from Alton, IL to St Louis (via the McKinley bridge). This trail is not paved but very bad for several miles with large rocks that I thought would puncture my tires. I was riding a loaded touring bike but I needed a mountain bike for this terrain. Please either repair the trail or note on website that this is NOT (entirely) Paved.

NOT paved the entire way

Long parts in the middle of the trail are not paved. Be careful on a road bike

We rode our tandem 15 miles out from the trailhead in Alton. A little rough in two sections because of recent flooding, but I am really glad we rode this trail. The Channel of Rocks Canal and bridge were the highlights of this for us. Tug boats, barges- everywhere! I only wish we had another day to explore this and other river trails in the area. Was it a perfectly smooth surface? No, but if two seniors, 68yrs and 71 yrs old can ride 30+ miles on a tandem and have fun, then so can you. (Pa. Tandem Team)

Trail in need of repair!

Very long section of the trail on the Granite City end is in severe disrepair and is basically a gravel road not suitable for a road bike. I was very disappointed.

Rode this trail for the first time from Melvin Price Lock & Dam #26 in Alton to the Lewis & Clark State Museum & Historical Site in Hartford. The best part of this ride was riding over the 900 foot wood planked bridge that crosses over Wood River Creek that enters in to the Mississippi River. Not much for scenic, unless you like trees and an oil refinery. Not much for shade either. Part of the trail in Hartford is in very bad need of repair and there are 4 crossroads with traffic that are a very dangerous hazard for bicyclists. If or when I ride this trail again I will start at East Alton taking the trail along Wood River Creek and going into Alton.

My husband and I rode this trail this summer on day two of our trip. We rode the Sam Vandalabene (sp?) the day before. We rode from Alton to the Lewis and Clark tower. The surface was nice. There wasn't much to look at, it runs along the levee and is mostly industrial and runs along the power line route. We stopped at the tower to go up for the view. It costs $5 per person to go up, not worth it. We turned around there because up to that point the trail really didn't offer anything to look at. The cross bars are a pain because they are frequent and you can't ride through them or around them and they are at the bottom of a hill. So you have to stop and get off to go thru and then start up a hill at a dead stop.

"The trail surface varies from asphalt to chip seal to limestome gravel. From Alton to the Lewis and Clark State Memorial, the trail is mostly asphalt. South of there, the trail rides on a levee along the Chain of Rocks Canal which is where most of the gravel and chip seal stretches are. Between the Lewis and Clark Memorial and ILL 143, there are some very tight anti-car barriers that may violate the Americans with Disabilities Act. They are at driveway crossings with truck traffic. "