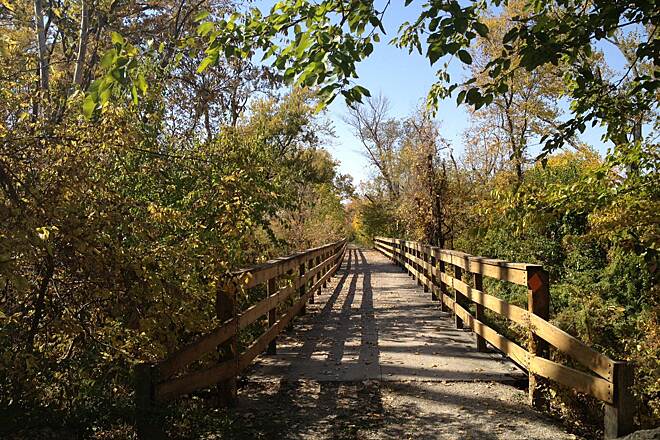 The Old Creamery Nature Trail, running between Vinton and Dysart, is so named for the Old Creamery Theater Company building in Garrison, another tiny farm community through which the trail passes. The gravel trail passes through rural Iowa among cultivated fields and farmsteads. In places stands of mature trees offer shade. At both ends and in the middle (Garrison) the trail passes through rural towns along an abandoned rail corridor now owned and managed by the Benton County Conservation Board. A group of local volunteers helps to maintain the trail.

Had a nice, slightly windy 70 degree day in november and rode from Vinton to Dysart. Only saw 3 or 4 people on the round trip. Ride is flat and trail well maintained except near Dysart where there were a few trees down (but you could get around) and one bridge that was blocked with a detour sign although i did cross it and it seemed fine. Nice views of farms, a few bridges over creeks and once over the Cedar River. You can stop midway in Garrison and there is about a mile paved extension in Vinton. You could do it on a road bike if its dry although a hybrid might be a bit better. I had my mt bike and that was fine. It was past the nice leaf time but earlier in the fall and I would guess spring/summer there are enough trees it would be quite pretty. Very nice overall and i liked the low usage for the solitude. There are about five parking spots at the trailhead in Vinton (right at the end of 8th street and in Dysart it runs right through town so seemed like a lot of spots.

I rode the trail from Vinton to Garrison and return today to get a taste of what it had to offer. The trailhead in Vinton has parking for only about 5 cars, but on street parking in the general vicinity is also available. One drawback is that the parking area is across the highway from the trail's beginning, a lot on the same side as the trail start/finish would be more agreeable. The trail was very flat for the most part, shifting of gears was never a question. The beginning of the trail was rather narrow. (think a country lane) As I headed west from Vinton the trail was wider in some of the farmland sections, while the wooded sections were just a bit narrower. At each entrance to the trail there were signs noting that no motor vehicles or horses were allowed on the trail. However, it seems that equestrians had been using the trail recently, so care is advised, particularly in the wooded sections where it was a little bit darker and more difficult to see what they left behind. As for the surface, the trail was pretty much a worn limestone, with a few short sections of larger gravel. A couple of the bridge crossings could use a little bit of TLC to smooth out the transition from trail to bridge. I ride a hybrid, so the thought of riding over 30 miles on this surface wasn't very appealing. On the roundtrip I encountered 4 other cyclists, and 1 walker, so even on a nice Saturday the trail is lightly used.

Nice trail with lots of trees and farmland.