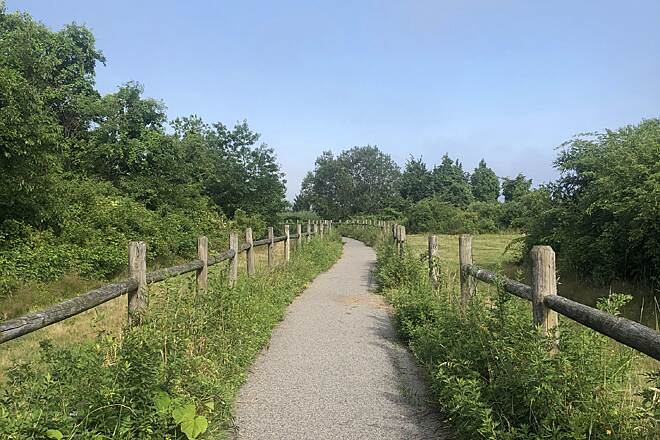 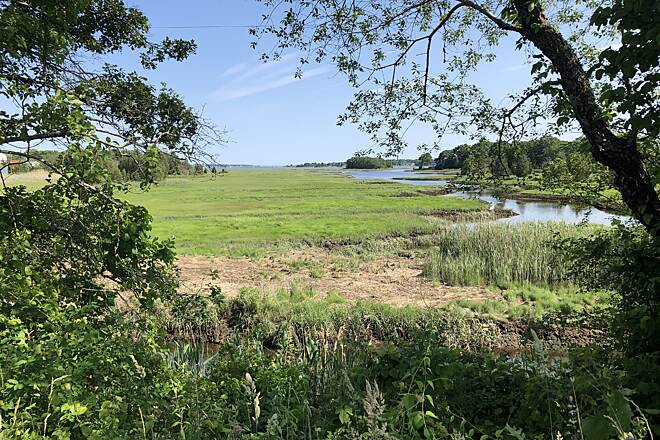 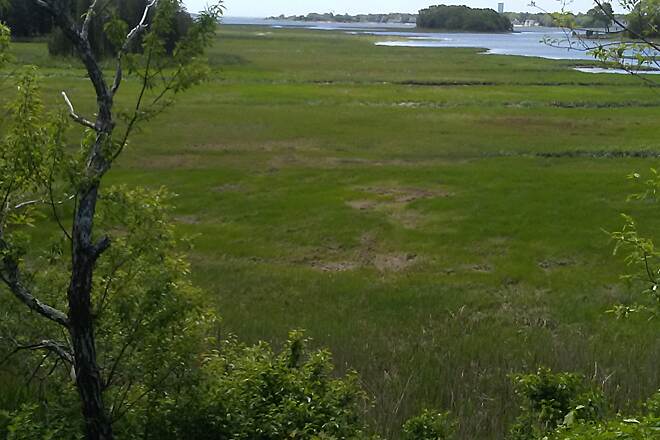 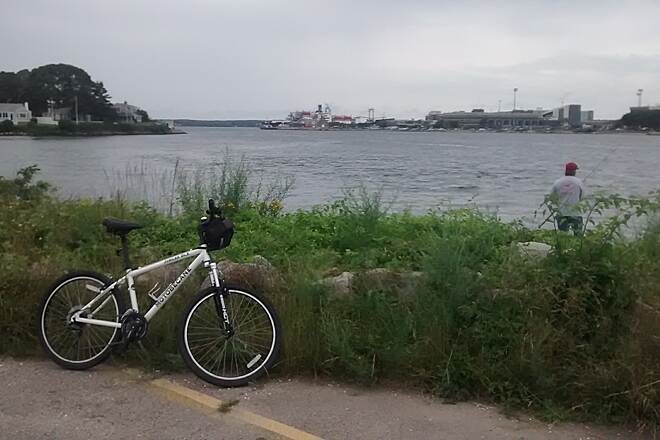 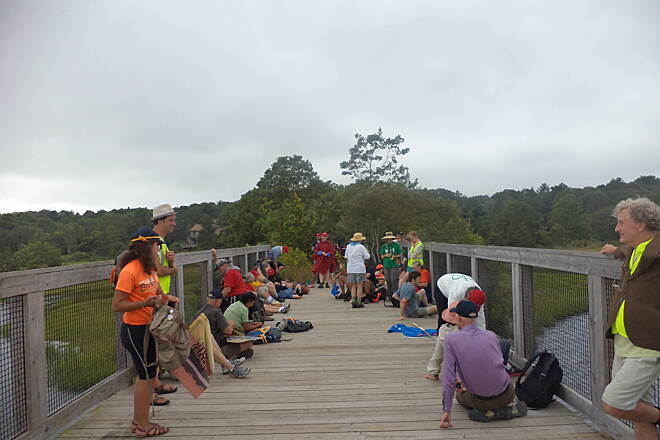 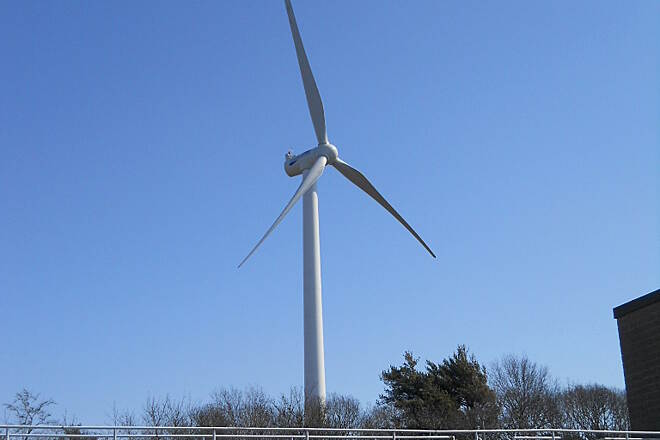 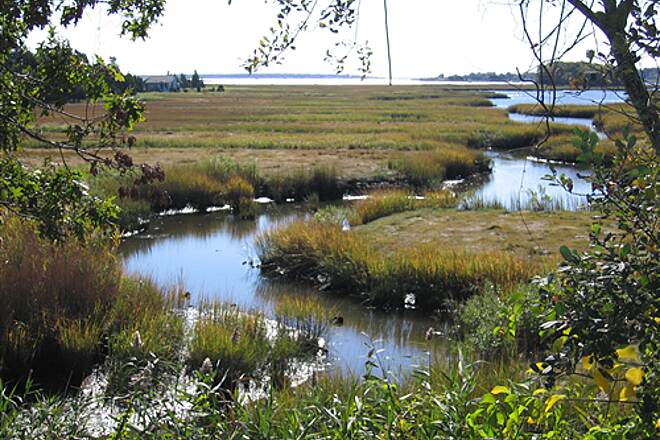 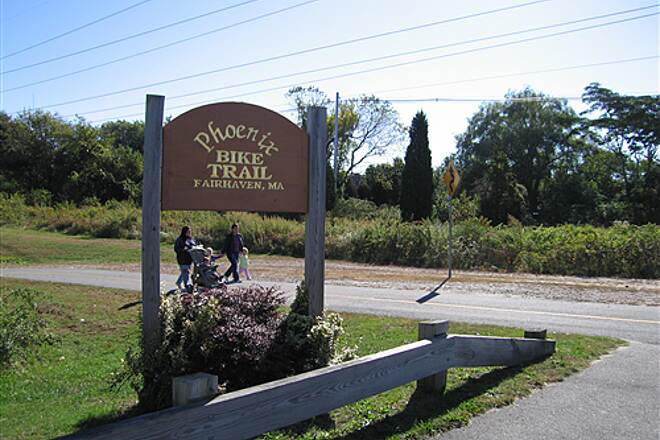 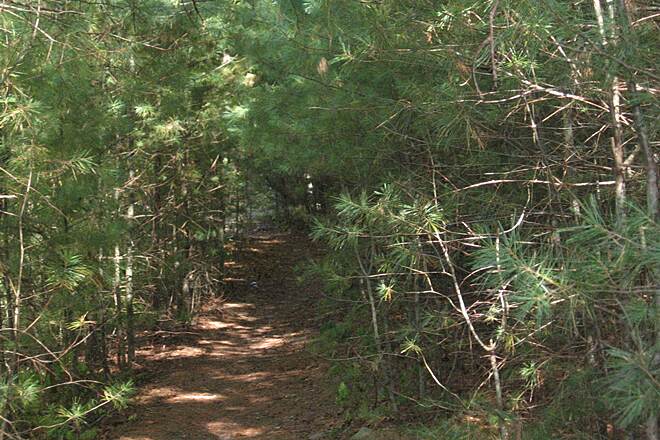 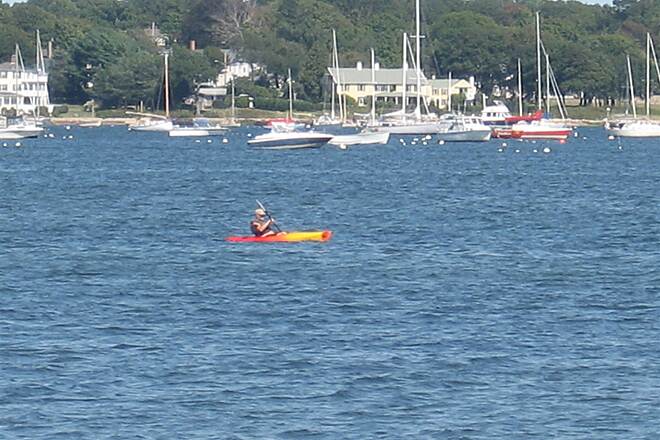 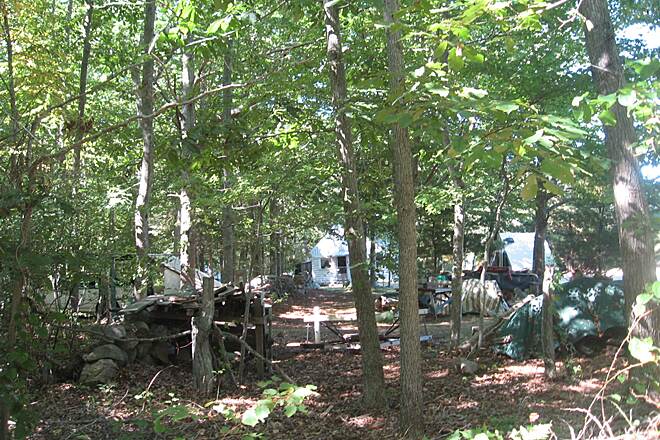 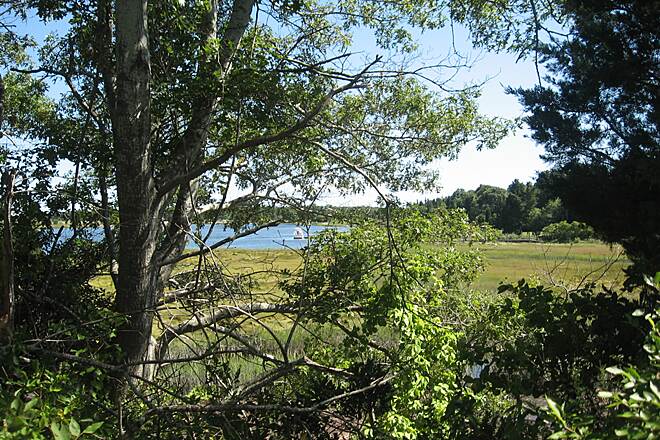 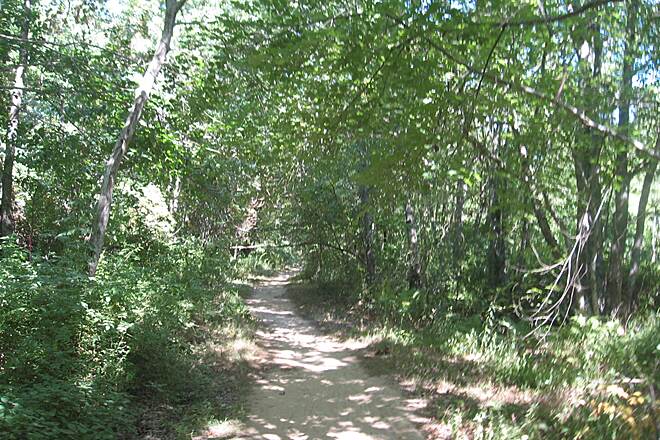 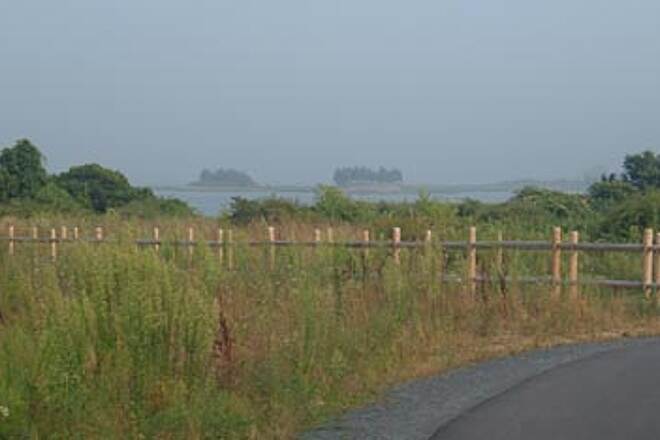 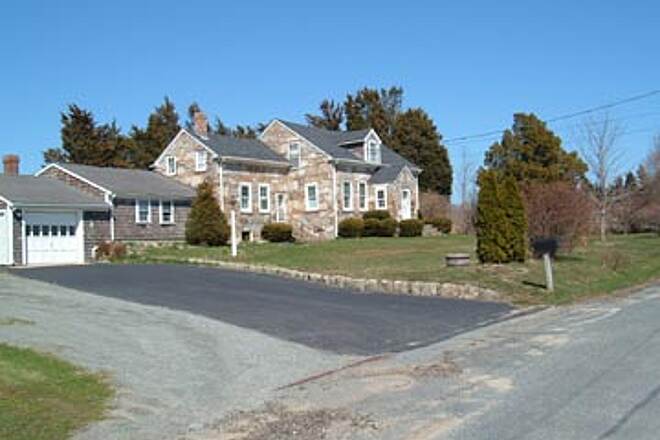 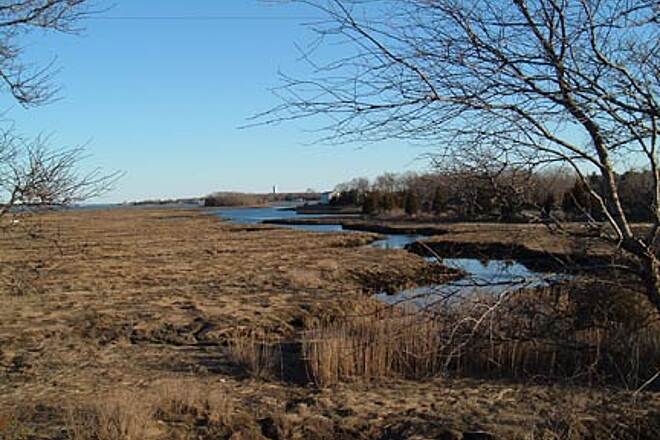 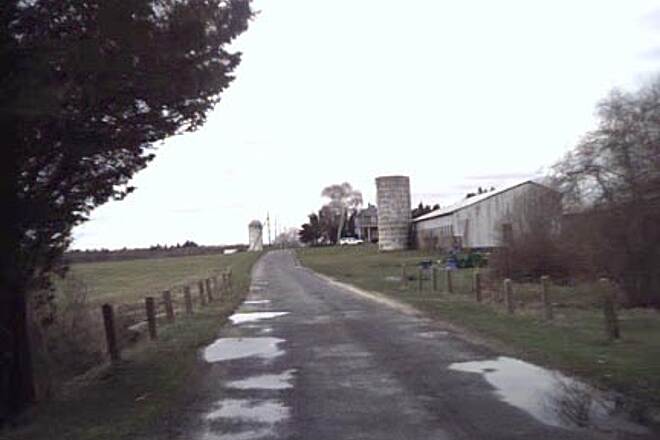 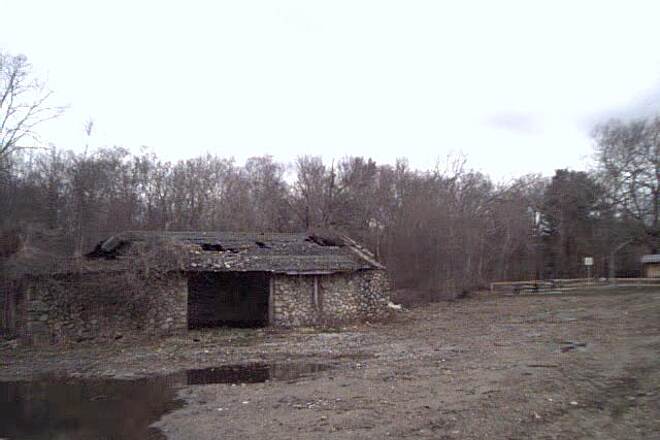 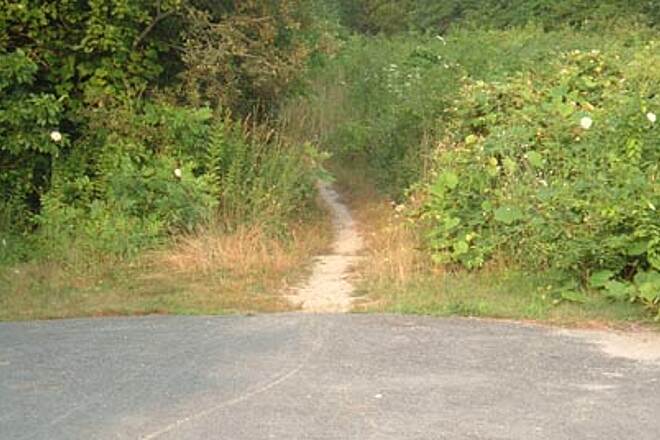 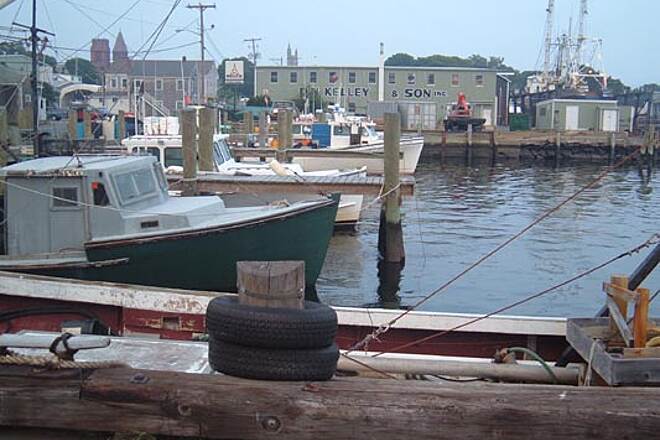 The Phoenix Bike Trail cruises through a mixture of surroundings on its relatively short 4-mile journey from the heart of the historical Fairhaven seaport to woodlands and farms on the outskirts of town. The paved rail-trail was named by schoolchildren after Fort Phoenix, less than a mile south of the downtown trailhead and within sight of the first naval battle of the American Revolution.

The trail follows the route of the Fairhaven Branch Railroad, which ran 15 miles between the ferry dock in Fairhaven through Mattapoisett to a main line connection in West Wareham. Launched in 1854, it later came under control of the New York, New Haven and Hartford Railroad from 1893 until 1953. Revived as a trail in 1999, it’s the first segment of the future 50-mile South Coast Bikeway that will link Rhode Island with Cape Cod as part of the East Coast Greenway, a developing trail network running from Maine to Florida.

The trail begins across Main Street from the old ferry terminal, where train passengers disembarked for the whaling and fishing center of New Bedford. The dock is used to maintain ferries serving Nantucket, Woods Hole, and Martha’s Vineyard. Numerous dining establishments offer fresh seafood and ethnic fare nearby.

One block east of the trailhead, Fort Street is a good place to launch explorations of the city. If you head 1 mile south on lightly traveled Fort Street, you’ll find Fort Phoenix, where reenactors fire cannons toward Buzzards Bay. From there, you can walk out on a seawall that protects New Bedford Bay from storm surges. A couple blocks north of the trail on Fort Street, you’ll find a collection of ornate European-style buildings constructed by local philanthropist Henry Huttleston Rogers and donated in the late 19th century. They now serve as the Millicent Library (45 Center St.), Town Hall (40 Center St.), and the Unitarian Memorial Church (102 Green St.).

Continuing east on the trail through Fairhaven’s residential area, you’ll pass through the former site of the Atlas Tack factory before arriving at a modern commercial center at Sconticut Neck Road. At mile 1.6, you’ll find the Little Bay Extension that forks to the right and rolls down Sconticut Neck for a mile, providing access to Little Bay along the way.

Continuing east on the Phoenix Bike Trail, you’ll traverse wetlands at the head of the Nasketucket River before passing farms and pastures. Just past Shaw Road, you’ll enter Plymouth County and the beginning of the Mattapoisett Rail Trail, which will one day run 4.5 miles along Buzzards Bay to the town of Mattapoisett; it’s currently just over a mile in length.

To reach the Arsene St. trailhead from I-195, take Exit 18 toward MA 240 toward Fairhaven. Head south 1.1 miles and turn left onto US 6/Huttleston Ave. Go 0.2 mile and turn right onto Arsene St. Go 0.1 mile and turn left onto an unnamed street past the Department of Public Works, which is adjacent to the trail. Take the first left into a parking lot. The eastern endpoint is 1.6 miles east, and the western endpoint is 1.9 miles west. There is no parking at the eastern endpoint.

Short ride but the path is well maintained and good scenery along the way. Some of the trail is closed right now and a downside is there weren't any place to stop along the way for coffee or lunch or good view at the end points.

Pleasant surprise at end of trail

I started at the historic fort phoenix on green street admiring the different architecture of the homes. Ride was easy, not crowded, just a bit too short. But a pleasant surprise after talking with fellow bikers. At the end of the phoenix trail, take a right onto Mattapoisett neck road, 1/2 mile on left is a cove, picnic tables overlooking the harbor. Continuing on Mattapoisett neck road 1.5 miles into a cul de sac, on the right there is a wooded trail you can bike to the water with a view of Brandt island.
The only reason i gave it a 3 was because i like a longer bike trail

This is a 4 mile rail trail that is in ok condition for road bikes with a few cracks in it. The eastern end is under construction. A pretty path going through woodland, farms and overlooking marshes. Very quiet on a hot July weekend

Stopped at the beach for shells. Very clean path and the fort was great

Stopped at the beach for shells. Very clean path and the fort was great

Short but worth it

This is just a really nice suburban bike path with some lovely scenic vistas. I spent 3 days in Cape Cod, doing a different bike trail each day. This was the last and shortest. It was really a nice way to end my trip, see some vistas of Cape Cod Bay and those new to me wind turbines. At one point I was riding almost directly underneath one and could hear the gentle sound of the rotating blades. There is one very cool stop that is a concrete pier looking onto a bay marsh.

This was a good ride with a hidden surprise at the end. In Mattapoisett there is an off road section through the woods. This section was rocky and only dirt but was my favorite part. There is a bridge not far from the paved road where the wildlife show was amazing. The Osprey were catching fish the whole time I was there. There were many other types of birds and animals also along the ride. It was a fun time.

Beautiful scenery, very nice trail. It does have a few hills and does cross many streets, but otherwise a great ride!

Beautiful, but extension not yet complete.

There is no public parking at Reservation Road. and the route from there to Mattapoisett Neck Road is a packed dirt track - not for road bikes There is a small pull off area at Brandt Island Road. Completion of this extension is scheduled in 2015-16

Most of the trail uses the Old Colony Railroad Right of Way (RoW), except for (1) a planned reroute around the YMCA facility. (2) a two-block portion between Depot St. and Acushnet Rd., allowing the route to safely cross Route 6 at the Main Street traffic lights, and (3) a curve to avoid Rt. 195 and instead link to the North St. park & ride lot.

As is this first week of September 2007, the first section is very much in use. The hard packed dirt is suitable for bikes with tires of 28mm or wider, and walking the trail is not a problem at all. The local newpaper has an article here

A tree canopy covers most of the trail keeping the user shaded and sheltered from any wind. However the trail does open to spectacular scenery of the west side of Mattapoisett Harbor. And abundance of water fowl, and saltmarsh can be viewed from the old wooden bridge near Camp Massasoit.

A walk or bike off the paved path is very much worth the minimal effort needed to travel the MUP (multi use path), from the Fairhaven town line to the Resevation Golf Course.
"

More than just a trail

"The Phoenix trail is a flat easy 4 mile paved ride. There are a couple view that are artists' and photographers' dreams.
At the 2.3 mark the view from a well placed bench offers a stunning view of the salt-marshs of the tidal basin and the bay. Many creatures of the wild, (fox, deer etc.), have been spotted in the not too distant marsh area.

When one crests the easy hill at the 2.5 mile, a rider can either cross Gillette Rd. and continue through the tree lined path, or take a right off the path onto the very quiet Rd. Here one seems to be transported back in time. Two old farms line the well worn road offering a glimpse of New England life during the 18th century. After passing the farms a rider/walker will view, to the south, almost a mile of grazing land stretching downhill to the waterfront area that has 15 or so summer homes, built on 25 foot stilts, at the high tide mark.

The road circles past more unused farmland back to the path. A user can either go left back to the start of the path or right which takes them the last couple of hundred feet of the developed trail. A skinny tire road bike is not advisable from here on. However if you are walking or riding with more durable tires, continuing will be worth your time. (This section is due to be developed and paved soon.)

Another two miles or so of hard packed dirt will reward you with a smooth tree canopied ride, culminating with a spectacular view of Mattapoisett's saltmarshes that you can enjoy from a wooden narrow 15' bridge over the slow moving waters of the Mattapoisett River.

Upon returning be sure to take in the newly developed Little Bay section located at the DPW. This area was opened to the public in the fall of 2004. Winding through the dense foliage, the path leads to the shore of the bay. Here one can stop to relax and take in the sights and clean ocean smells provided by the bay. An abundance of water fowl and unusual birds add to the effect.

Do not hesitate to venture onto the quaint towns quiet streets. Fairhaven is a bike friendly New England town with an abundance of history, unusual architecture and eclectic dining and shops. Stop by the visitors center located a mere two blocks from the parking area on Center Street for information about the town. You won't regret it. "

"The Fairhaven bikepath is a great place to roller blade, skateboard, bike riding, or just go for a walk. It's a 4 mile walk if you want to go the whole rout.

This bikepath is actually in my back yard. If you like walking or getting exercise this is a wonderful place to go. I would recommend the Phoenix Bikepath because it's just about the best place you can go! "