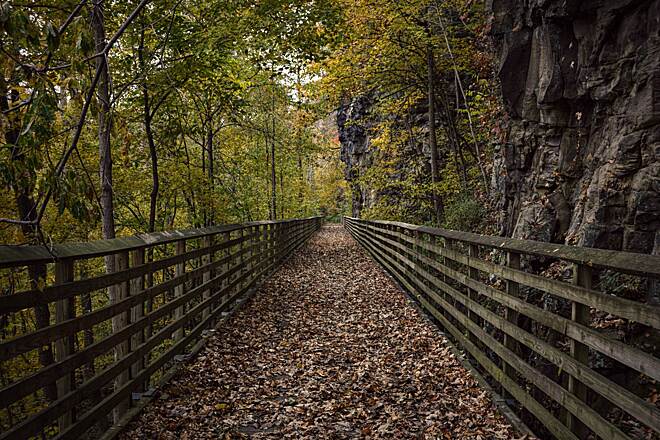 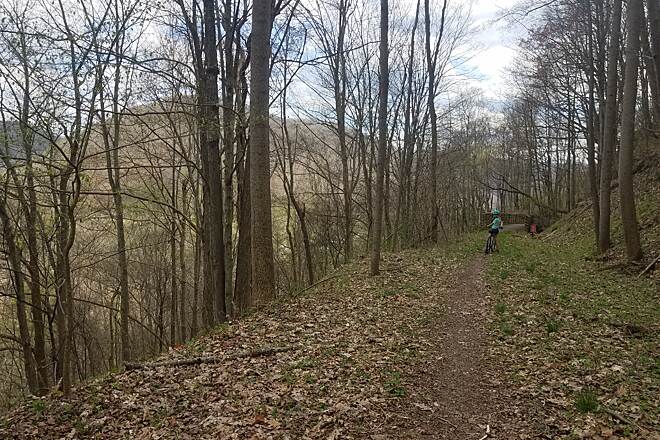 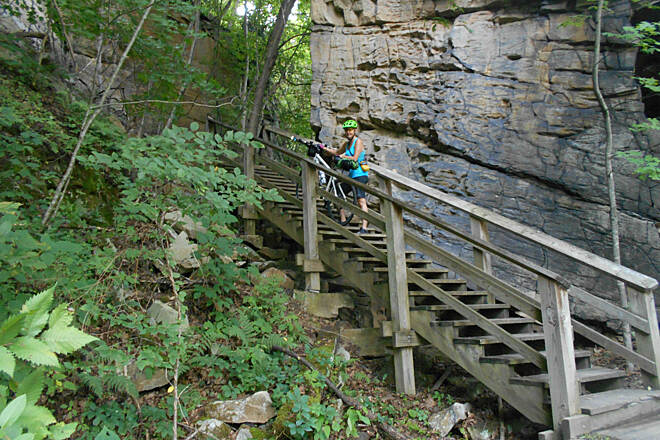 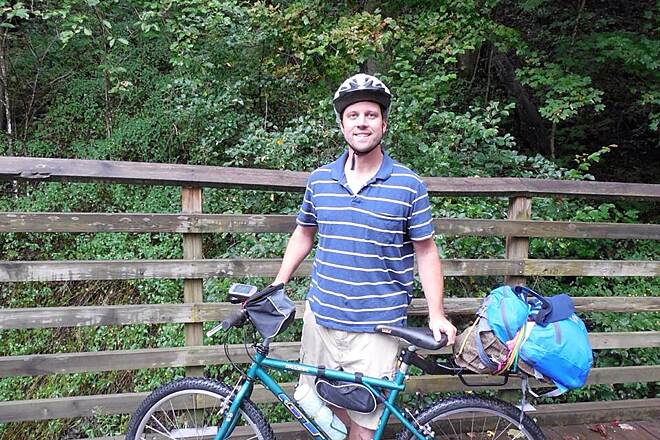 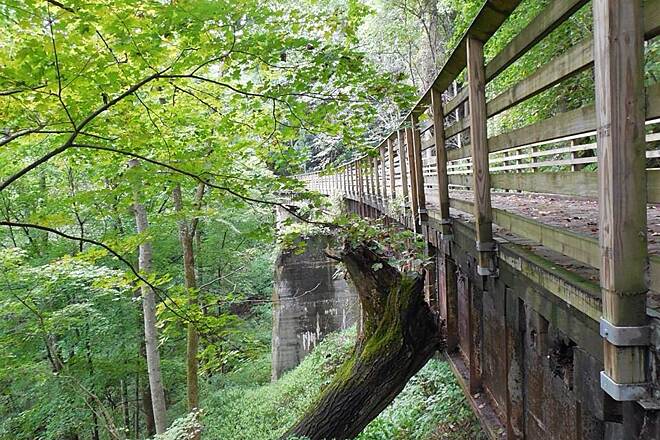 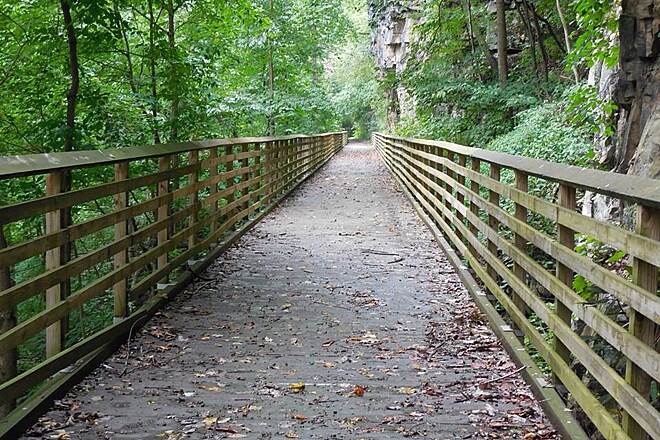 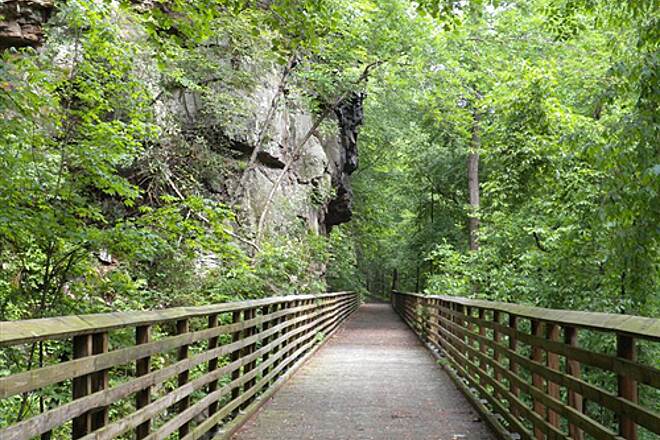 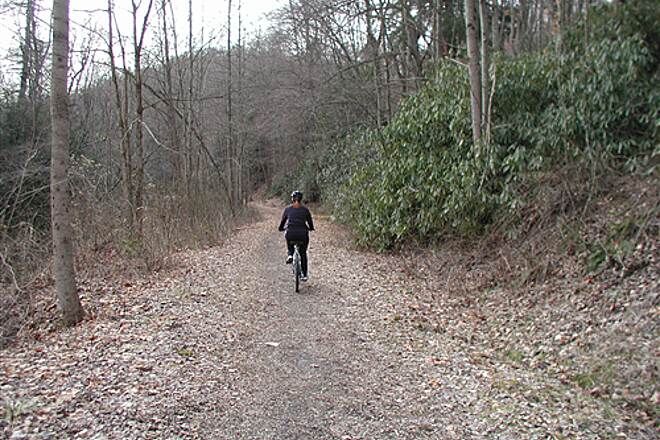 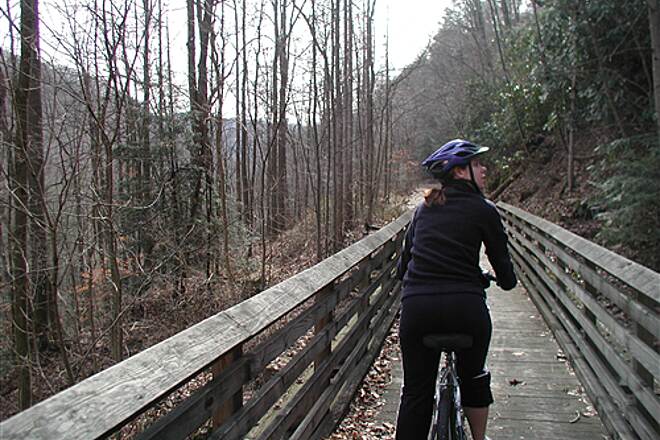 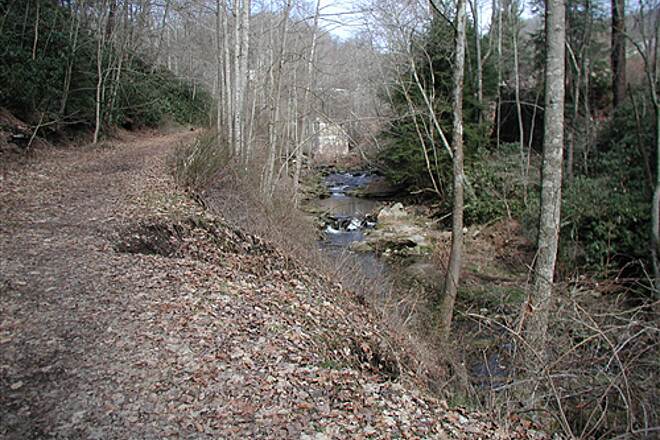 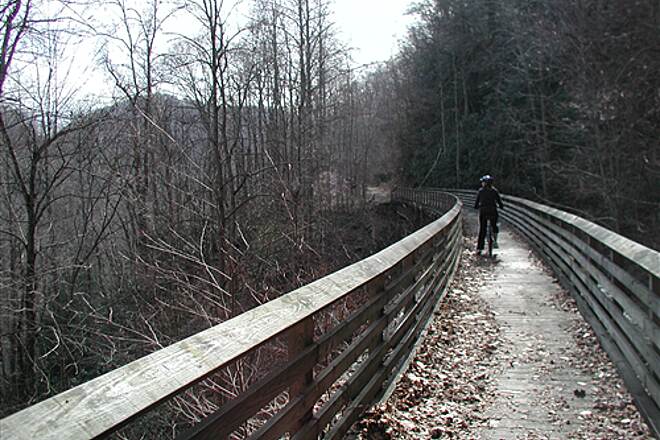 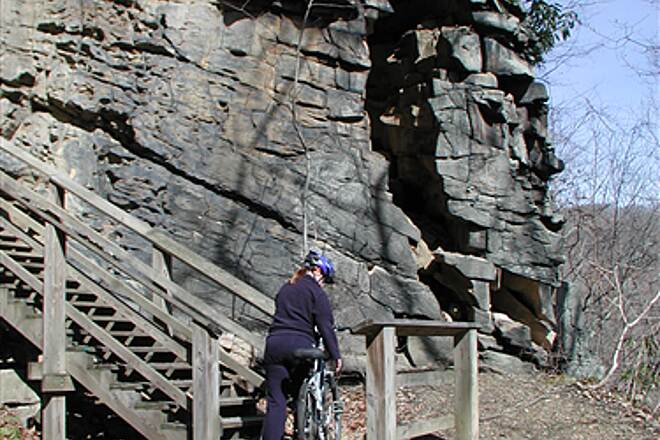 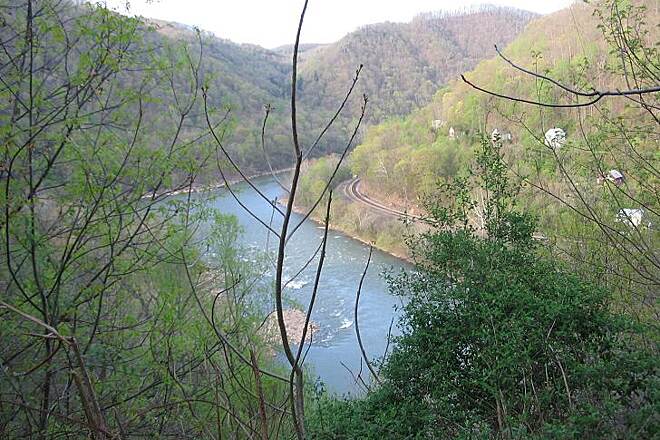 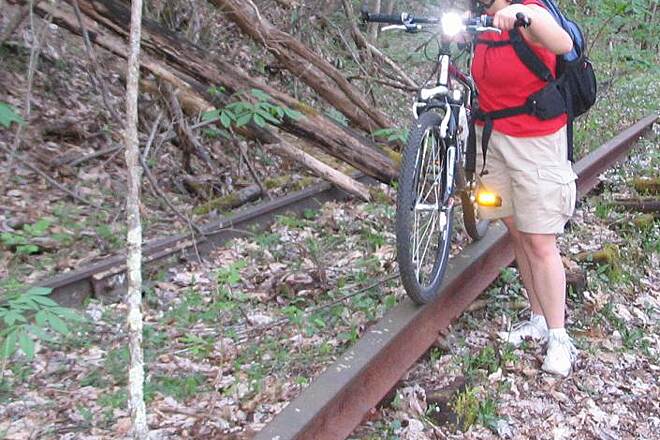 Five old railroad trestles serve as scenic attractions on this dirt trail in the New River Gorge National Park, although one of those trestles has been closed for safety concerns, splitting the trail into two shorter segments of 1.97 miles and 1.2 miles.

The Rend Trail traces the Chesapeake and Ohio Railway’s Arbuckle Branch, which, beginning in 1906, served the coal mines that dotted the now-forested landscape in southern West Virginia. Although the railroad pulled out years ago, you can still see evidence of tracks in the forest, as well as remains of coal mines and coke ovens along the route.

The longest stretch of open trail starts at the Thurmond Trailhead on Thurmond Road/County Route 25 near Dunloup Creek. You can find remains of the Newlyn coal mine in the vicinity as well as overgrown foundations of South Boyd.

In about a mile, find an overlook with views across the New River to the old railroad boomtown of Thurmond. Created along with the railroad in the 1870s, the town flourished in the early 1900s with two hotels, two banks, a movie theater, and other businesses, as well as a depot and other structures to serve steam trains. Its decline started with the Great Depression in the 1930s, when the population numbered nearly 500 residents.

Today, the National Park Service owns most of the town, which recorded just seven residents in the latest census. The park restored the depot, which is open as a visitor center during the summer, and has stabilized other buildings. It is still served by Amtrak and is reachable via County Route 25/Thurmond Road.

Continuing on the Rend Trail, you’ll pass the third trestle about 1.8 miles from the trailhead. Close by, the 0.3-mile Arbuckle Connector heads to the right down a short, steep, rocky slope to the Southside Trail.

This southern segment of the Rend Trail comes to a dead end at a trestle. In 2014, structural engineers determined that the supports were rotting and that the bridge could fall at any time. The park has no timetable to repair the trestle as of 2022.

To visit the northern segment of the trail, use the trailhead at Minden, itself an old coal mining town where several old coal camp houses are still inhabited. The trail crosses one trestle and then ends before the second one in about 1.2 miles.

For the southern segment, parking is available at the Thurmond Trailhead on Thurmond Rd/CR 25 (1.1 mile west of McKendree Rd/CR 25).

Parking in Minden for the northern segment is at Minden Ave & Thurmond Rd.

To access the Thurmond trailhead, head north from Beckley on US 19. Take the Glen Jean-Thurmond Exit and turn left onto State Route 25. Go 0.5 mile to Glen Jean, following the signs for the Rend Trail or Thurmond-Minden Trail, located 5 miles outside of Glen Jean off SR 25.

A scenic, but fairly rough, rail-trail

I rode the southern part of the Rend Trail today, up to the second trestle, which unfortunately remains closed due to being "critically structurally deficient". I am not an engineer, but it appeared that the steel substructure under the second section of the deck (from the south end) has slipped from its intended position. Unfortunately, it's probably very expensive to fix something like that in such a remote area.

As for the rest of the trail? It's quite scenic. Beautiful forest and mountain views. Sheer drops off to the east that are steep enough I'd need a topo map to tell you how far they drop, and equally steep mountain on the west side. Coal baron Rend built the trail in 1901-1904 for $350,000, and it's no wonder it cost so much, it's a small wonder the trail exists at all. Many rail lines have small areas that are challenging, more so in West Virginia, but on this one pretty much the whole route would be challenging to build.

Thus, TrailLink is correct that this is, technically, a rail-trail. But the farther you get from the southern trailhead, the less it feels like one. It gets narrower, eventually becoming a singletrack through a short meadow before opening up a bit before the closed trestle. It's also about 240 feet of elevation gain from the base to the closed trestle, which is officially 1.27 miles. The plus side is that you could likely coast most of the way back, but it's definitely rougher than the nice, crushed-limestone covered rail trail you may be expecting if you've ridden the Greenbrier River Trail.

There's also a Church "Loop" trail that you can hike from the Rend Trail, which takes you to the Thurmond Baptist Church, which from the exterior appears to be in fairly good condition for being in the middle of the woods. I put the "Loop" in quotes since I couldn't figure out how to make a loop out of it. It is definitely not bike-accessible, and still has some trees down across the trail from the hurricane last fall.

In summary, this trail is best combined with exploring Thurmond, and perhaps some of the other short, nearby trails. Expect some work but also some nice scenery, and you'll likely ride away happy.

Trail Closed A Mile Down

10/26/2015: Sign at the Minden trailhead advised "Trail Closed 1.27 Miles". We rode on down and found the second trestle barricaded (couldn't see the issue). Otherwise seemed like a great trail!

Along with two friends I rode this trail in July 2014. Frankly I usually don't waste my time on a 3.5 mile trail. But my friend assured me it was an awesome ride. IT WAS!!!!! Fun little climb on the way out. Nice fast downhill on the way back. And the views of the New River from way up high are breath taking!! The stairs around the rock slide will require a little effort but very well worth it. I gave this trail 5 stars. Has to be the best 3.5 miles in the state!!

WIFE AND I WERE LOOKING FOR A SHORT RIDE ON OUR WAY HOME FROM RIDING THE GREENBRIAR RIVER TRAIL. NICE UPHILL GRADE. BEAUTIFUL SCENERY. THEN YOU CAN COAST BACK TO YOUR CAR ON THE WAY BACK

"It's a nice ride, a little bit of a small windey road there, but the trail is nice, a constant uphill grade from the Thurmond side, 1 set of stairs that you have to carry the bikes over (big rock), and some small trickling waterways making a little bit of mud on your way. You hardly have to peddle the whole trip home though...very nice. Beautiful views as well."

"The trail is nice...rarely rough (a few rocks, some remnants of the old train line, and 1 set of stairs you have to carry your bike around), a nice smooth grade as would be expected from an old rail line, so not too steep and (the best part) from the directions given, you park at the bottom of the hill. So the ride home is a breeze! Nice trail."

"On October 7, 2003, I took a gentle, quiet walk in the woods overlooking the New River with fall colors springing forth from the trees. It was very relaxing and comforting."

Great blend of beauty and history

"This trail is a sentimental one for me, since it is the one my dad used as a kid to get from his home in Rock Lick (Minden) to his grandparents' house in Thurmond. Of course, back then it wasn't a hiking trail, but that didn't stop anyone. Although Thurmond is now a ""ghost town"", my great-grandparents' house is still up on that hill, with all of my great-grandpa's sheds (he farmed and raised livestock up there) and all of the religious sayings he painted on the steps. Down in town, there is a post office, a depot which has been nicely restored, and a great place to admire the New River. The hike itself is rewarding as every few minutes you catch glimpses of Glen Jean and Thurmond through the trees. Lizards and millipedes abound, and the creek keeps you company for about a third of the walk.

It is an easy walk, but when you factor in the round-trip distance, it's a nice workout. Besides, if you hike for the beauty and serenity of the surroundings, the difficulty doesn't matter too much anyway. Be warned, though, if you go from Minden to Thurmond or vice versa, there is a connector trail that you need to take which is very steep and pretty ankle-endangering. It isn't well marked, but if you have a map or just a good eye, you shouldn't have a problem. Although I grew up in Michigan and now live in Georgia, this trail is one of my favorite places in the world. "