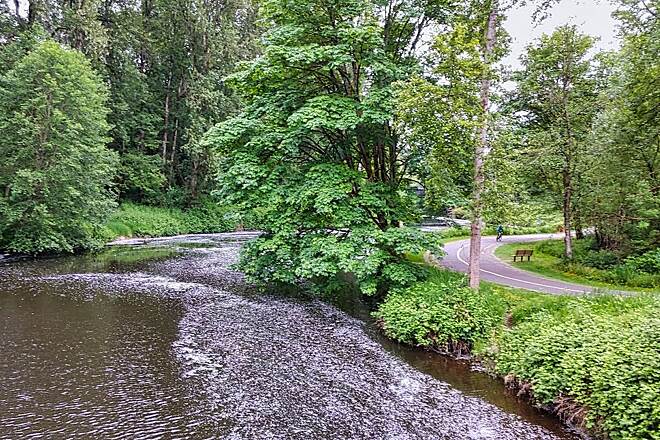 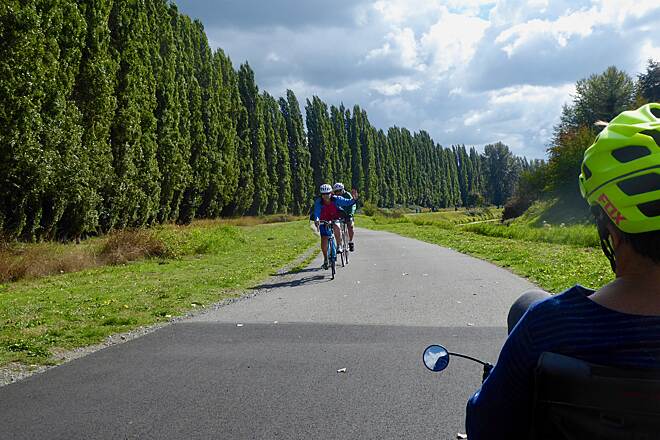 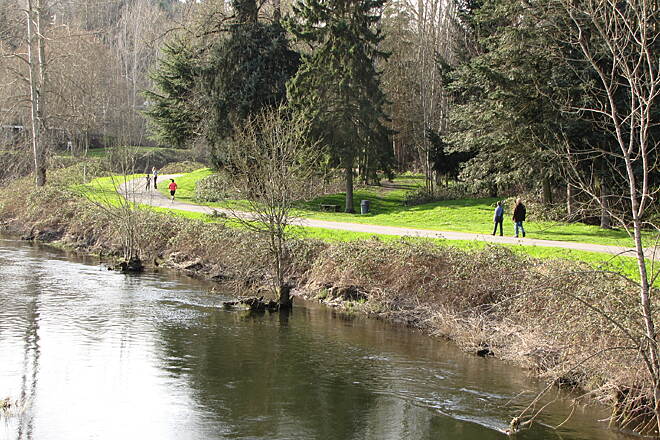 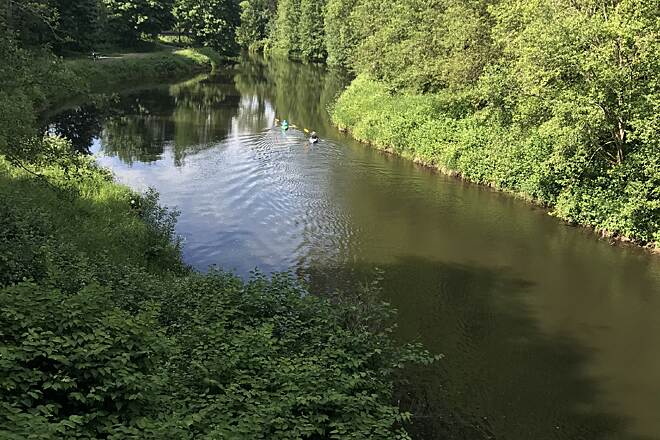 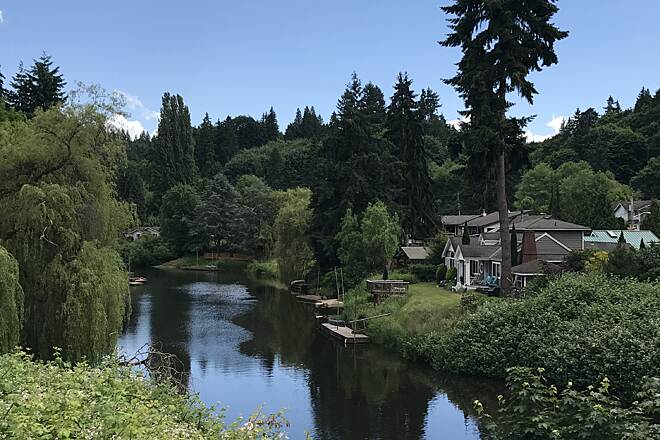 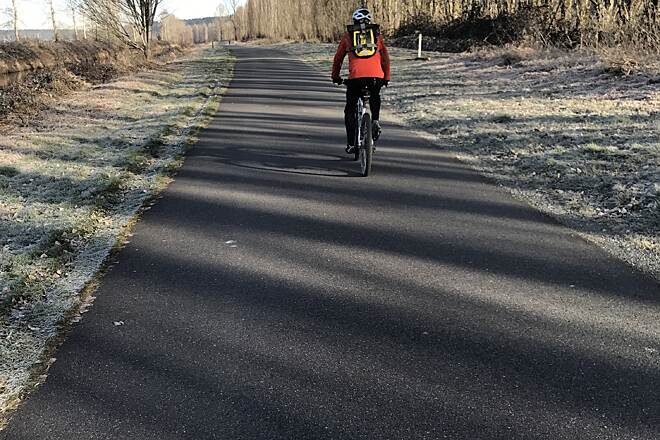 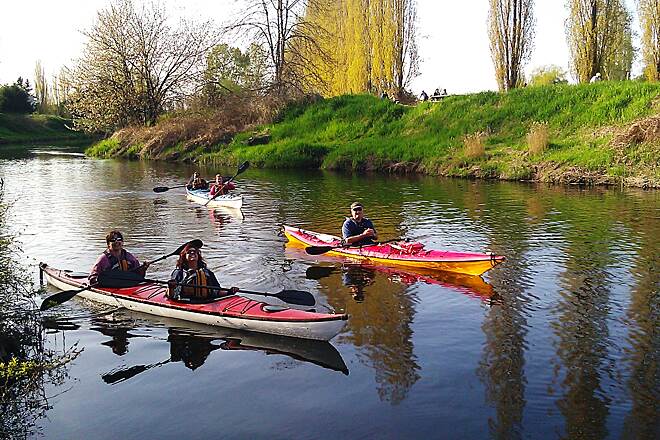 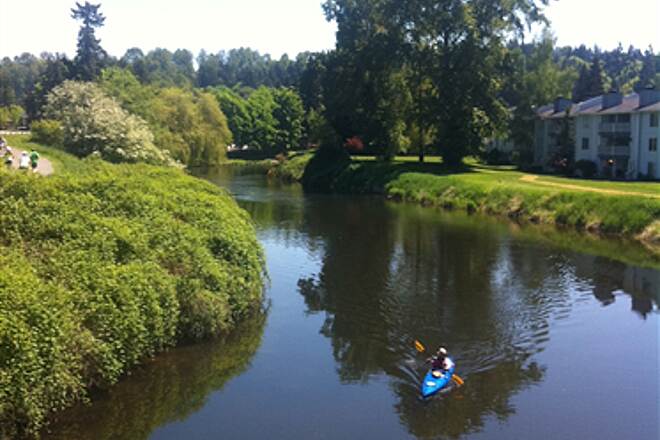 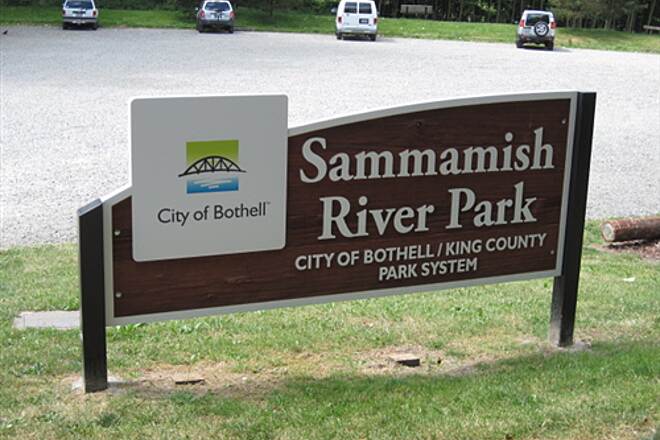 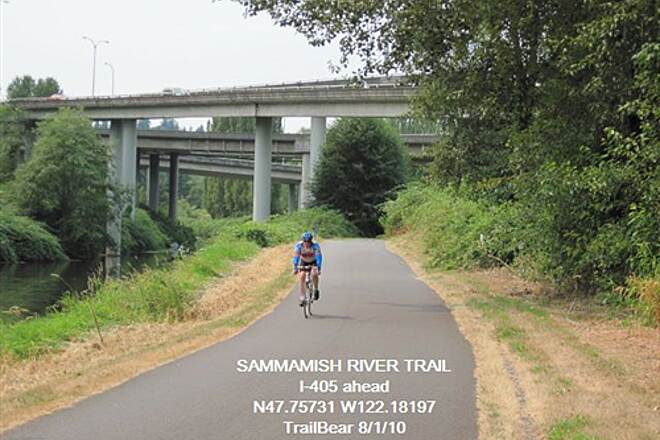 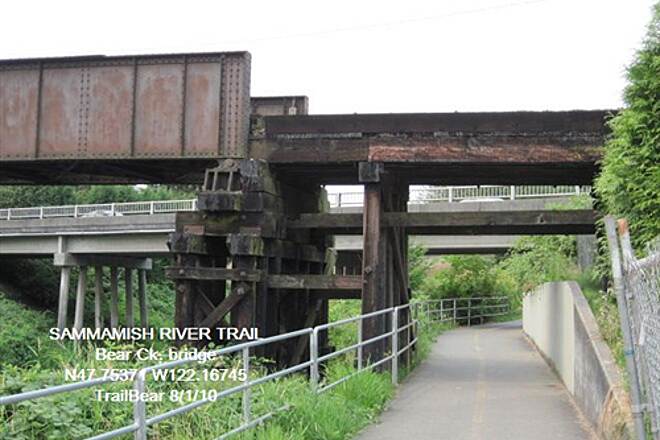 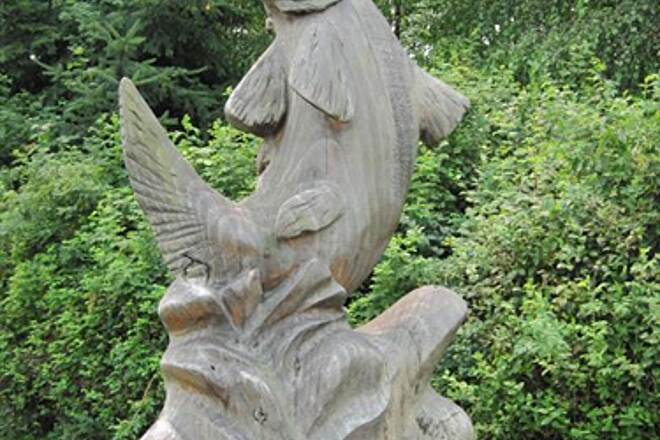 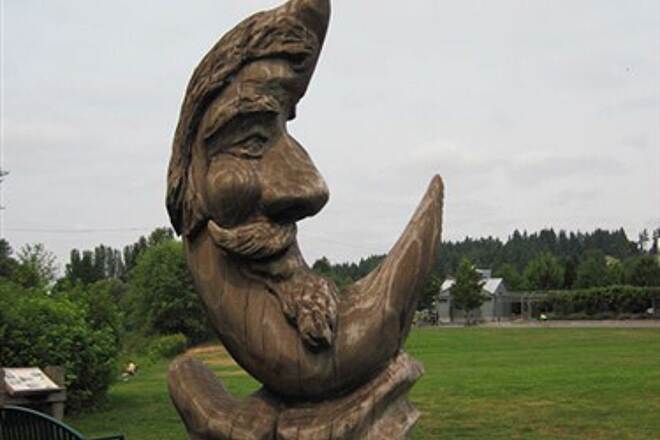 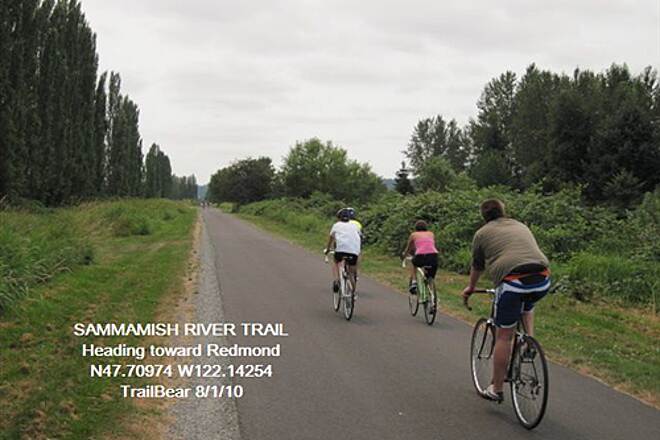 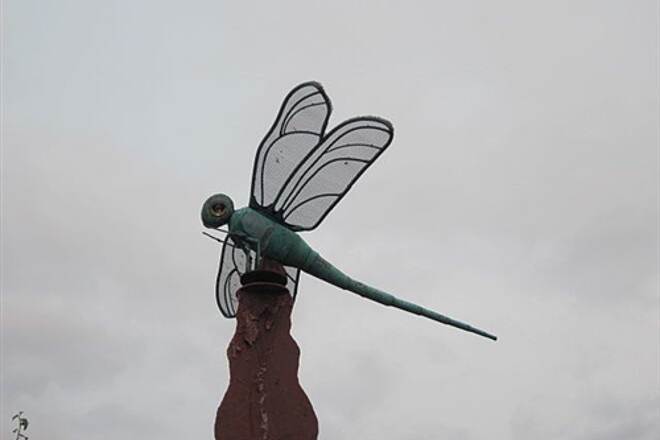 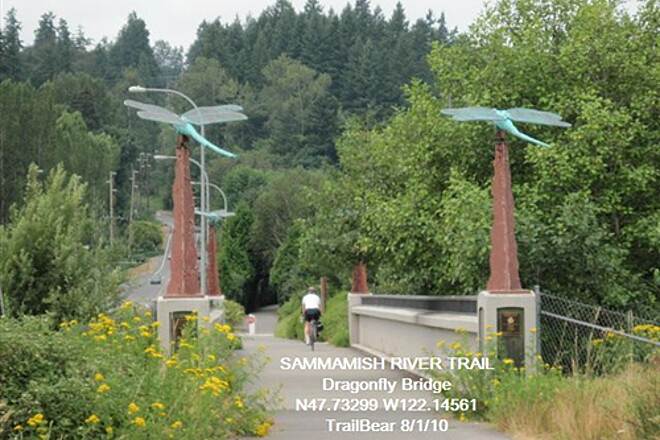 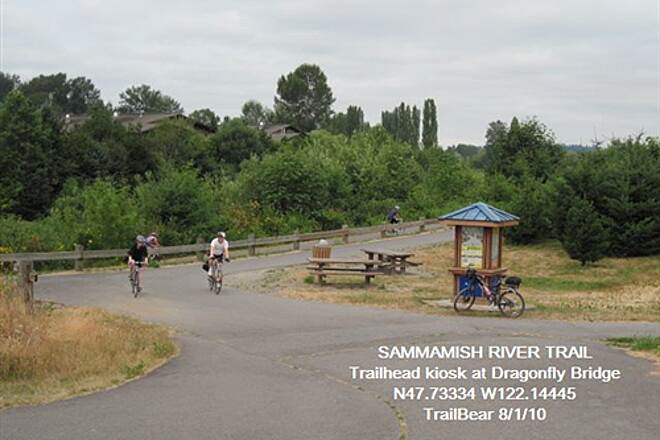 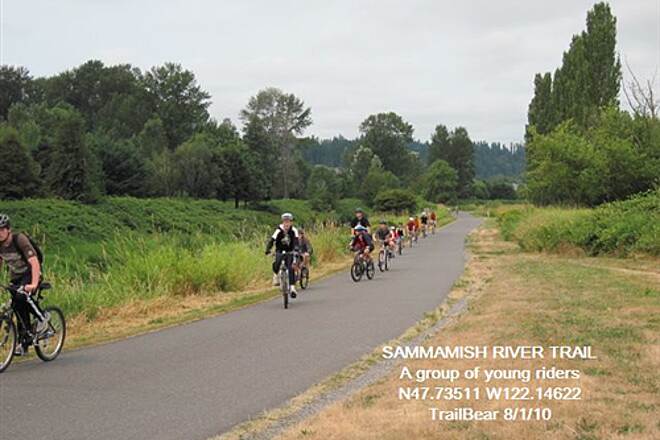 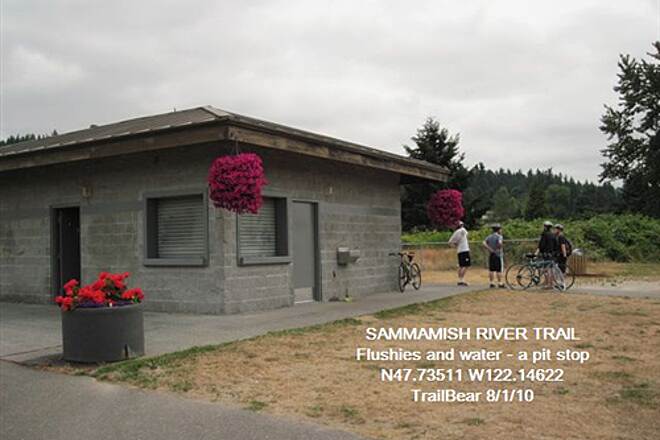 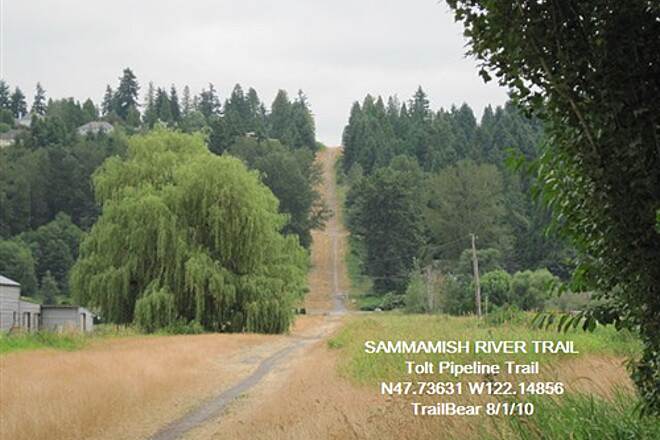 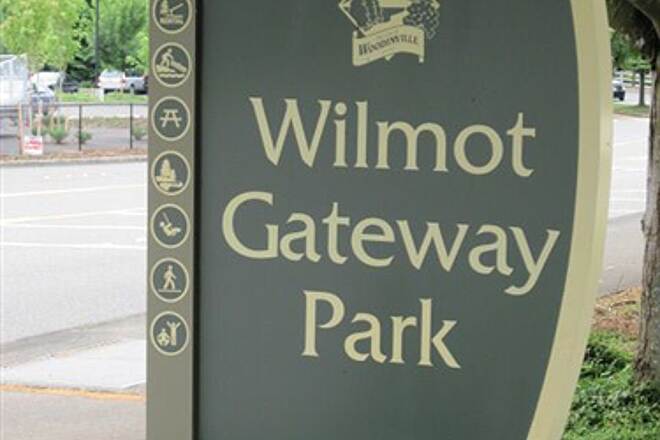 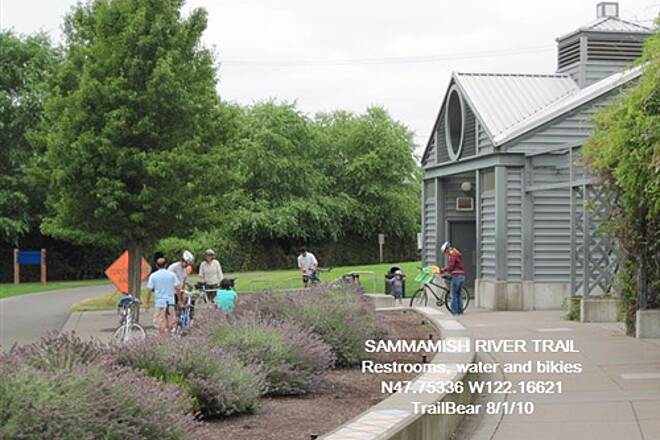 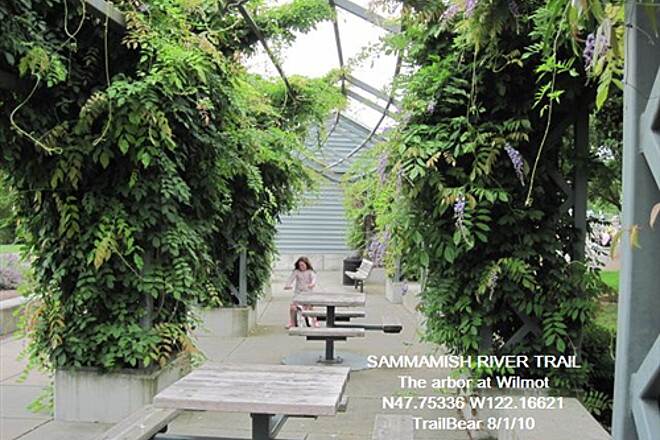 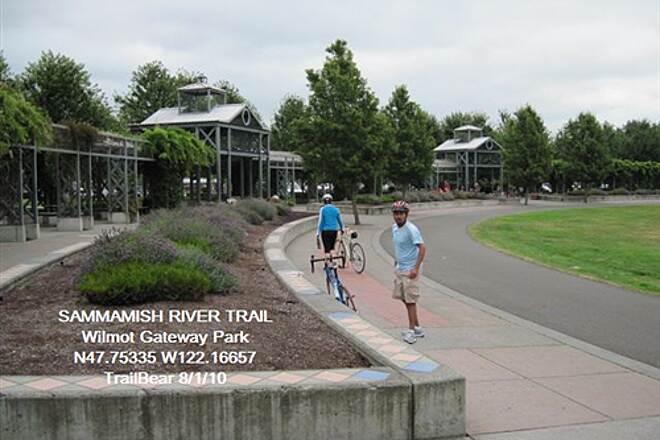 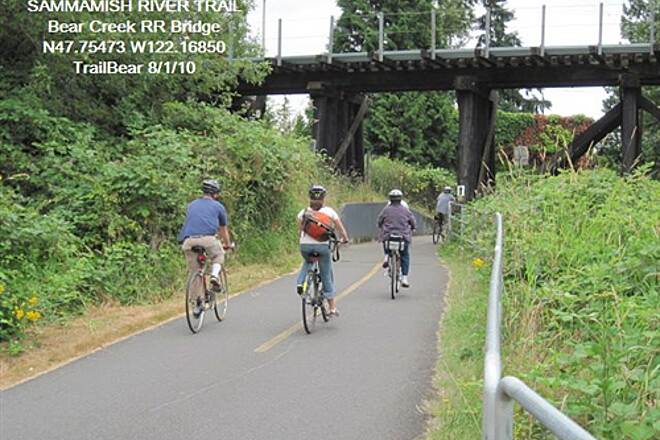 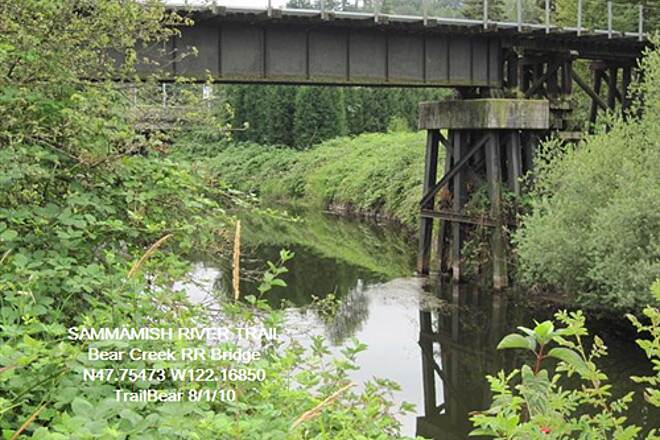 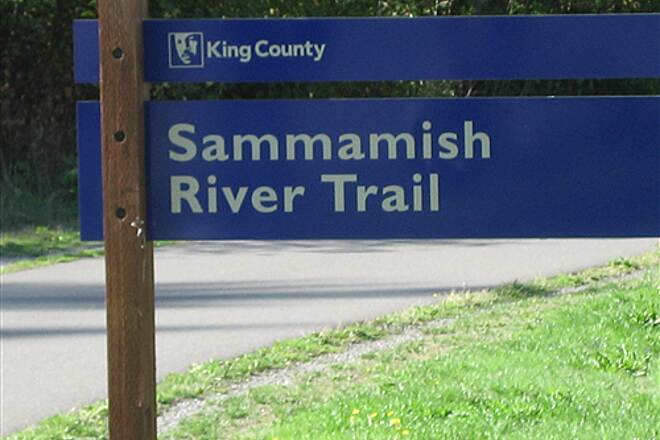 The Sammamish River Trail rolls along smoothly through a wide, scenic greenway that's home to riverside parks and farms, as well as a growing wine industry. The trail is the center link of the Seattle area's locks-to-lakes corridor, which connects the Ballard Locks to Lakes Washington and Sammamish via the Burke-Gilman and East Lake Sammamish rail-trails.

Yet the Sammamish River Trail isn't primarily a rail-trail. It's a levee trail that was created in the 1960s when crews drained the swamps and completed the second rechanneling of the one-time meandering Sammamish River. The wide asphalt trail follows the river for 11 miles, from Bothell's Blyth Park in the north (where it connects to the Burke-Gilman Trail) to Redmond's Marymoor Park in the south (where it links to the Marymoor Connector Trail and East Lake Sammamish Trail).

Passing through the population centers of Bothell, Woodinville, and Redmond, the trail is one of King County's busiest. Visitors are drawn here by the open spaces; the views of far-off Mount Rainier and the closer Cascade foothills; and the opportunity to hike, run, skate, or ride a bike or a horse (a soft-surface side trail for equestrians is accessible between NE 175th Street in Woodinville to Marymoor Park). Bike commuters roll through here in the mornings and evenings, and lunchtime strollers fill the Redmond section on sunny weekdays.

To start at Blyth Park in Bothell, leave the parking lot and turn left. Turn right onto a trail heading north, and then turn left at a sign pointing to the Sammamish River Trail and bear right at the next junction. The river supports lush surroundings here. A bridge crosses the river for a possible side trip to historical buildings at Bothell Landing. The trail meanders east and then trends southward at Woodinville's Wilmot Gateway Park, which sports a grape arbor. Maples and alders grow along the river, while picnic tables, benches, and soccer and baseball fields inhabit the grassy areas by the trail. Weasels, hooded mergansers, painted turtles, beavers, frogs, salmon, and herons share the river, and hawks and bald eagles patrol the sky.

Farther south, an off-route trail option follows NE 145th Street westward to the Hollywood Winery District, where both notable and little–known wines are poured in tasting rooms. A brewery and restaurant can be found there as well.

The route passes agricultural land and athletic fields on its approach to Redmond—where the path can get crowded on weekdays. It passes a government complex and senior center south of NE 90th Street in a trail section known as "The Stroll." At an old trestle, the river trail crosses the Redmond Central Connector, which uses an inactive BNSF railroad right-of-way to access downtown. After a couple of river crossings, the route ends at 640-acre Marymoor Park, where cyclists can take a spin in the velodrome, and all visitors can find the Marymoor Connector Trail that joins the East Lake Sammamish Trail.

To reach Marymoor Park from I-405, take Exit 14. Follow SR 520 E for 4.7 miles, and exit to W. Lake Sammamish Parkway NE. Turn right, and go 0.2 mile. Turn left into Marymoor Park at the signal at NE Marymoor Way. The trail begins at the first lot on the left by the tennis courts.

I ride this trail daily on my bike from Redmond to Bothell and enjoy the scenery no matter rain or shine. People along the trail are very considerate and friendly giving way and providing help when needed. The maintenance teams blow the leaves off the trail early in the morning and keep the bathrooms clean. This is a great trail to enjoy miles of pavement without any cars.

Beautiful trail but crowded. This is not a bike trail for speed work. Kids, dogs, roller bladders, runners. Multi use trail.20 years ago it was empty but not so now.

Beautiful trail but crowded. This is not a bike trail for speed work. Kids, dogs, roller bladders, runners. Multi use trail.20 years ago it was empty but not so now.

A relaxing beautiful ride. The trail was relatively empty on Thursday in May. Didn’t have to be worried about others on the road. Planning to return in August.

Very smooth paved trail with lots of traffic. We rode a total of 29 mi R/T The trail keeps going to Sammamish lake and we turned around about4 miles into that trail. Lovely bathroom by the lake.

We rode this trail in its entirety over two different days. Our kiddo just learned how to ride a two wheeler and we’ve been practicing trail etiquette. This trail is crowded so if young kids are riding they should be prepared to stay to the right, use voice or bell when passing. The scenery changes throughput and there are many places and parks to stop and take a break, eat snack or use the bathroom

Nice, but suboptimal for young kids and odds

This is a nice trail with great parking and access. But, it’s very busy on weekends, and it’s frequented by many hard-core / fast bikers. So, it wasn’t great for our family with two young bikers and a dog, as we were constantly stressed about ensuring that our kids and dog stayed out of the hard-core bikers’ way, etc.

This wide and well-maintained trail is an absolute joy to ride. There are bathrooms at regular intervals in the scenery is the world and very pretty. There is no elevation change and a 15 mph maximum speed. On weekends it can get crowded with walkers, bicyclists and jogger strollers. If you were so inclined Redhook brewery is a long

nice and paved and 11 miles long.

Heavily used on weekends with any number of types of people and transport (walk, bike, roller-blade, even roller-skiing). Lots of dogs and kids. But during the week it is people going to work! And flat, flat, flat! Scenery is vast, hardly any trees and along sammamish slough, which is about ten feet down, but adds to the charm. Watch for high winds!

I've been skating this trail every week since my first review. It's actually pretty good trail for rollerblading. Pavement is most of the part in good shape, it's long enough, wide enough and never too busy. There's also great parking area at Marymoor park.

Lots of all kinds of flying bugs along today

Skated this trail today from Marymoor to Bothell and back to Marymoor. Overall pretty okay experience. Close to Marymoor surface kind of rough, but manageable. When returning from Bothell (after 8 pm) there was a lot of all kinds flying bugs going into my eyes...river is a bit smelly; is it always smelling? I never skated this trail before.

Great Trail, One Beef About It

I love this trail for biking and the fact that it seamlessly becomes the Burke-Gilman trail to extend your ride into Seattle. The trail is flat but can be crowded on nice days and during peak hours. Riding early morning you will often have the trail almost to yourself without worrying about dodging kids, animals, or adults who insist on walking four across. But all this should be expected on such a popular trail.

There is one part of the trail that bothers the heck out of me and that is between Marymoor Park and Wilmot Gateway Park in Woodinville. And that's because of the stink of the Sammamish River. It's just not pleasant. This isn't a problem along the rest of the trail I don't know if the cause is natural, due to the wineries and Red Hook Brewery along the way, or some other human endeavor. But riding hard and sucking in stinking oxygen is not necessarily the way I want to spend my exercise time. I first rode this part of the trail about ten years ago and then avoided it because of the smell. I rode it again in September 2014 and my odorous friend was still lingering. This part of the trail is still very popular so maybe I just have a low tolerance for these kinds of things. If you have low tolerance as well then you may want to start at Wilmot Gateway Park and head westerly on the trail.

Rode the Sammamish River Trail on my trike and it was fabulous!

I love the way this trail meanders along the east Sammamish river bank and wraps around nature and residential establishments along the river...Great photography, especially at sunset! I rode my Greenspeed trike and even though the road is gravel, it is quite densely packed so it was no issue putting in the miles even under the cover of darkness. I rode in mid January, so temps drop down into the upper 20's...Carry extra layers of clothing if you bike the darkness! I saw a gray wolf scavenging through the grassy area when I returned back to Marymoor Park. Awesome sight, I will return! Highly recommended and it seems a well kept secret! Only a few people spotted on the trail today...

We rode this trail out and back from Maryville Park on a Friday. It is now all asphalt, no dirt. Lots of comfortable stops, drinking fountains and restrooms. Surprisingly almost all flat and beautiful green along a sparkling river.
Gar and Elizabeth Salzgeber

"This is one of my favorite trails in the Seattle area. My wife & I have ridden numerous times between Tracey Owen Park & Redmond, a distance of about 12 miles, I think. The trail is 99% flat & there are usually many people jogging, skating or walking along the trail, especially when it's sunny outside. On occasion I see a cyclist speeding way too fast & it can get crowded in the summertime. The previous post mentioned looking out for ducks on the trail. I've come close to hitting geese & on my last ride, a chicken was crossing the road (this is not a cheap attempt at a bad joke). This trail is definitely worth taking the family on. There's a nice play area near the Woodinville restroom facilities.

I use the Sammamish to get to the Tolt Pipeline Trail, a great ride for mountain bikes only. There is a sign barely visible from the Sammamish River Trail telling you that you are approaching the Tolt. I found it accidentally one day & unfortunately do not recall where the turnoff is located.

Incidentally, the Sammamish River trail is an extension of the Burke-Gilman Trail."

"It's so nice to be able to see some cranes and ducks, which appear to be following you as you travel on this very nice trail. With numerous spots where one can sit on benches along the way, I definitely recommend this for a family of four. Watch out for the various (unannounced) duck crossings -- I've almost run into a couple."