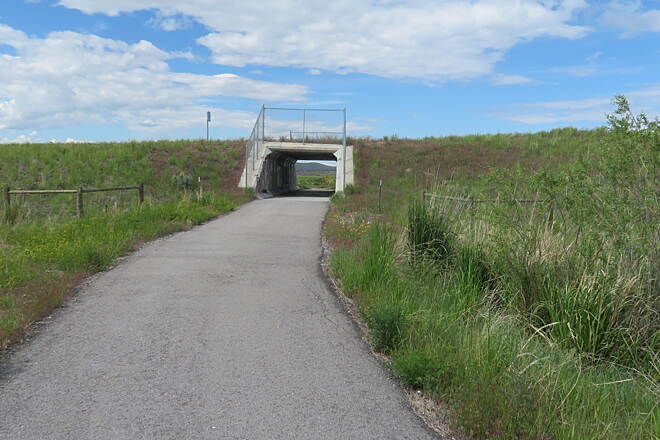 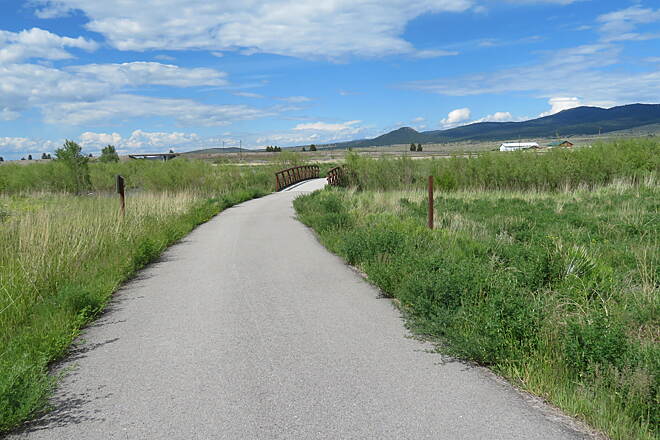 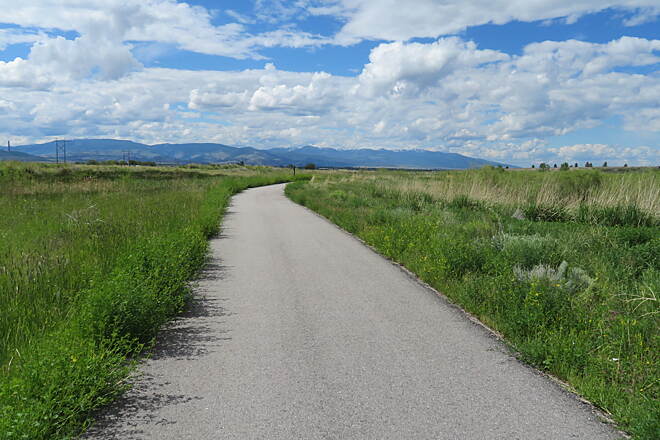 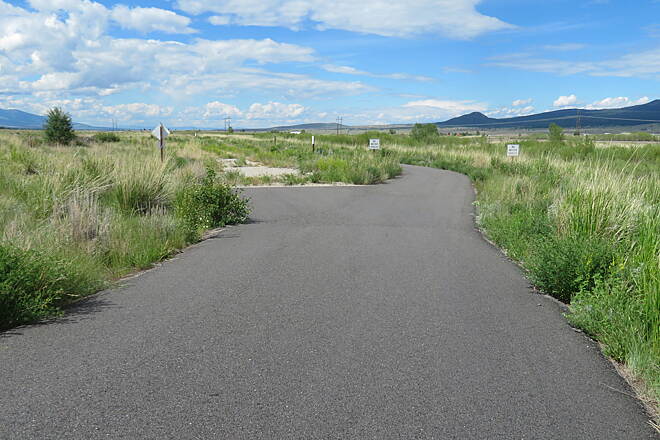 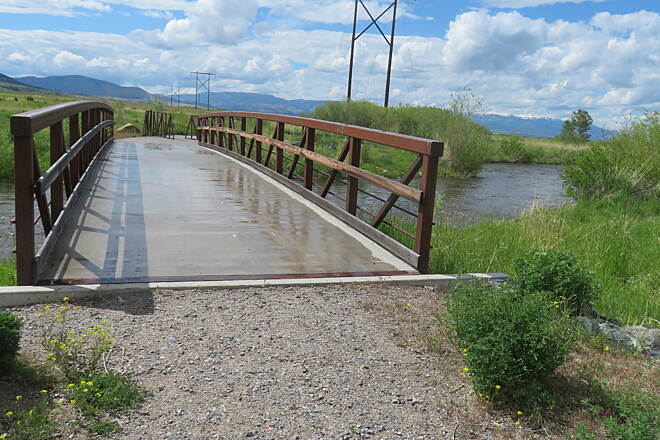 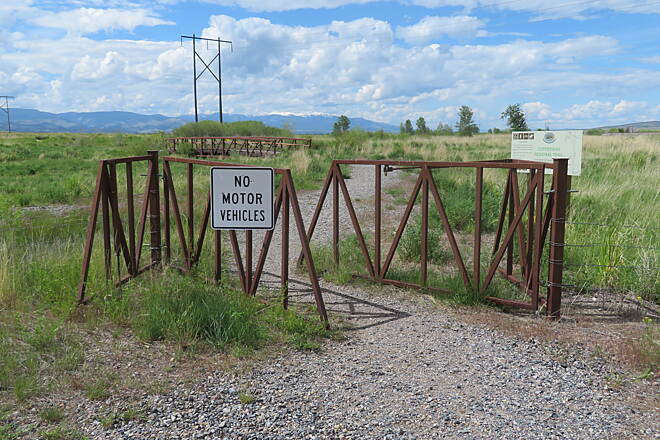 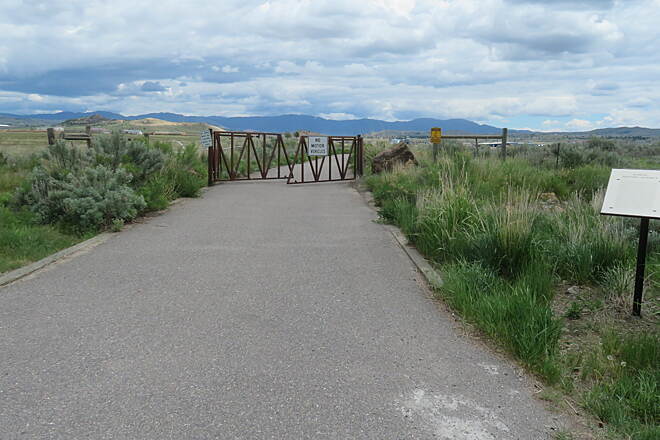 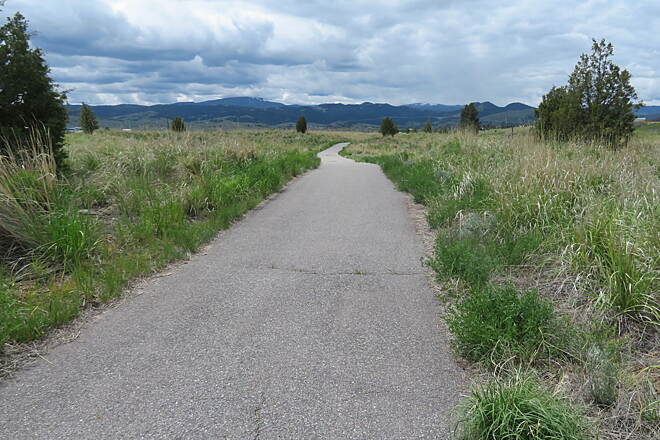 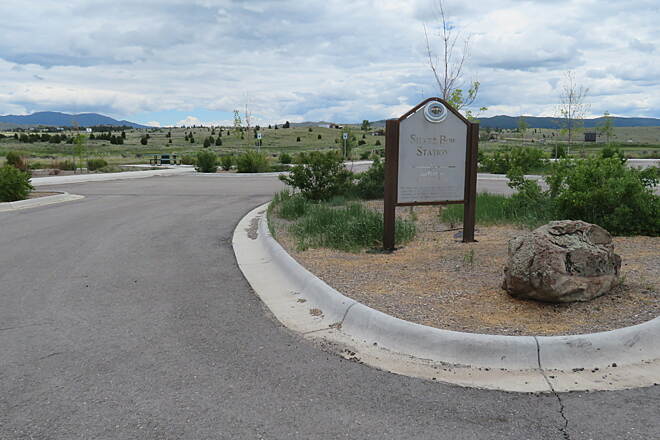 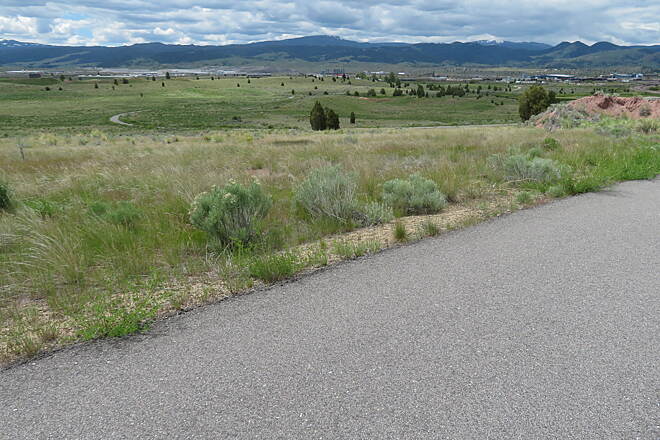 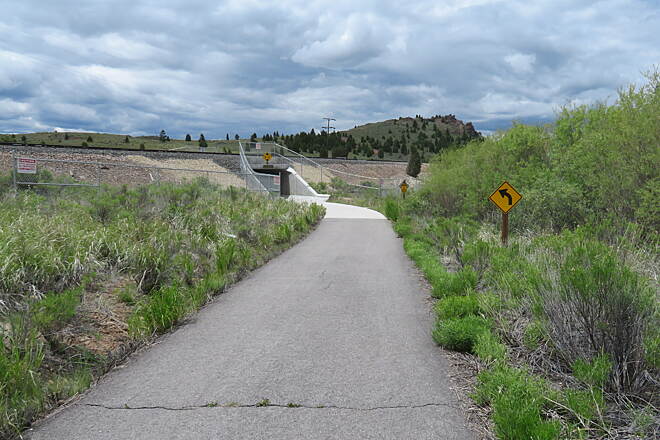 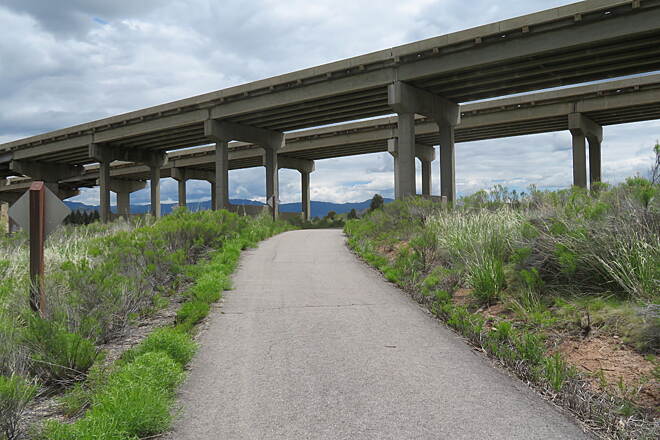 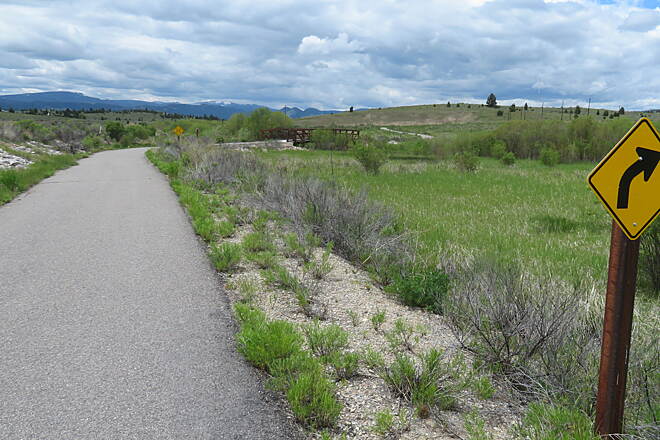 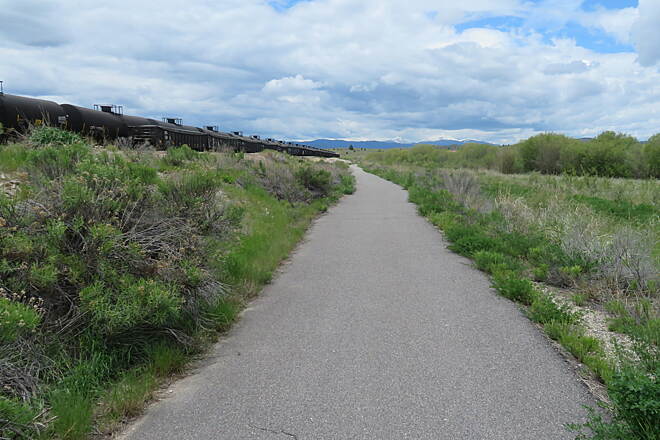 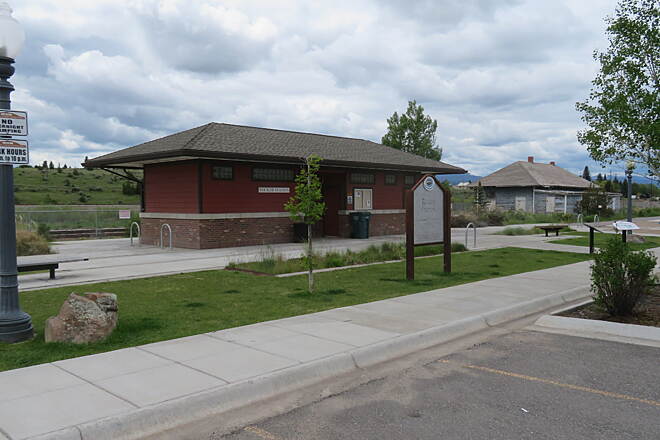 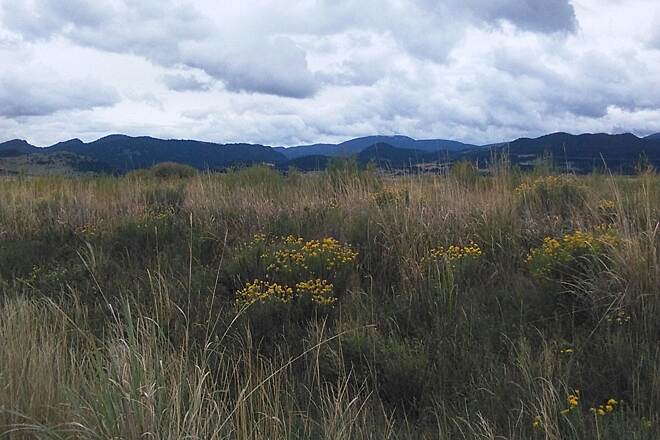 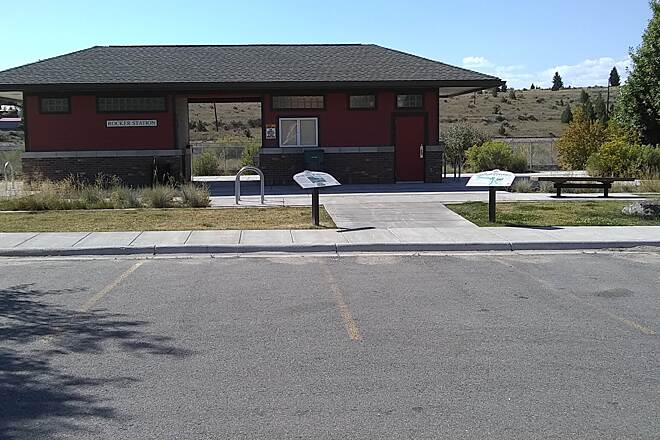 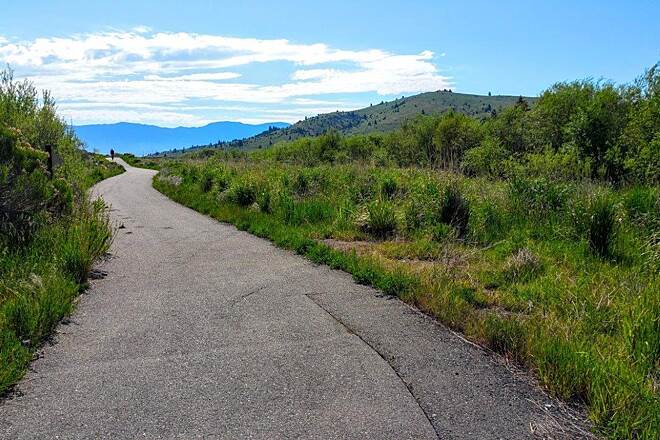 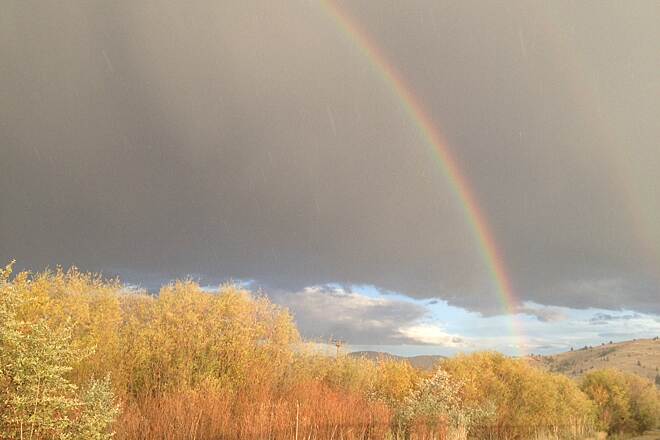 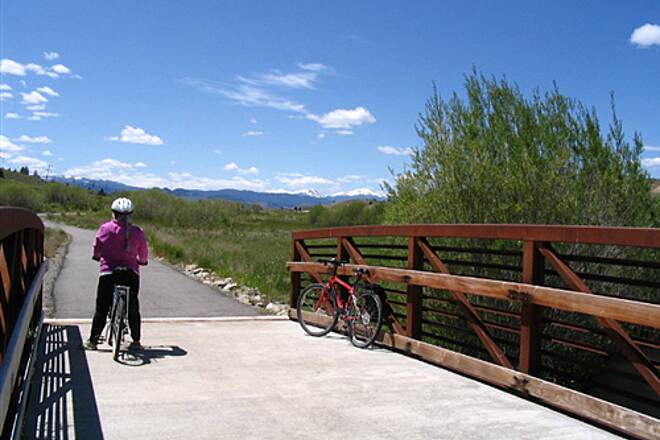 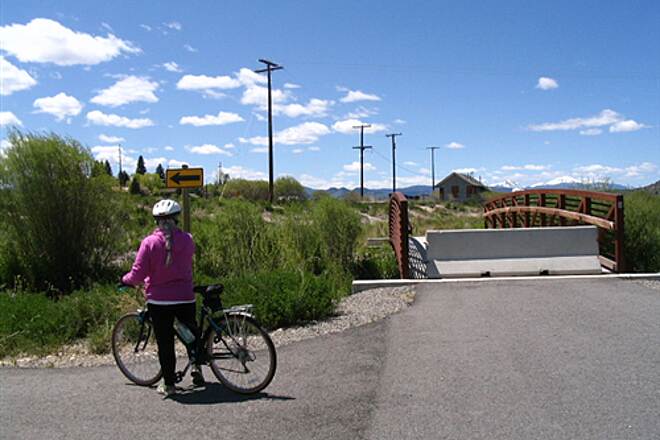 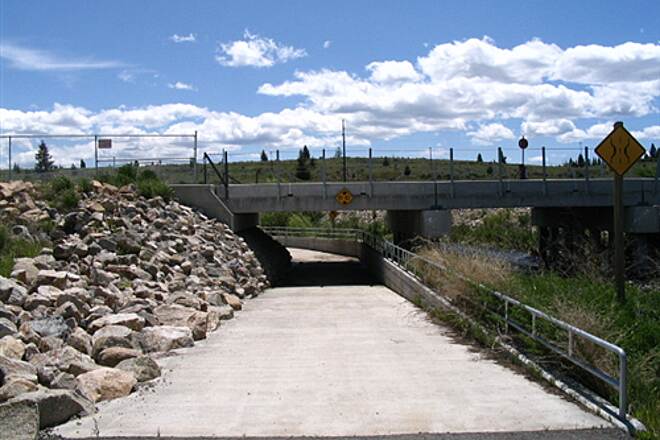 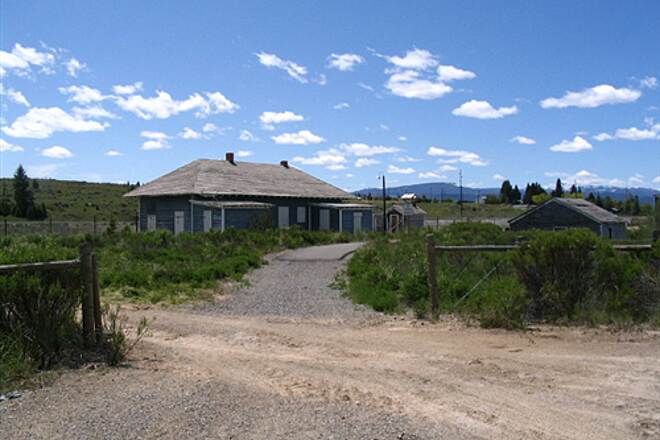 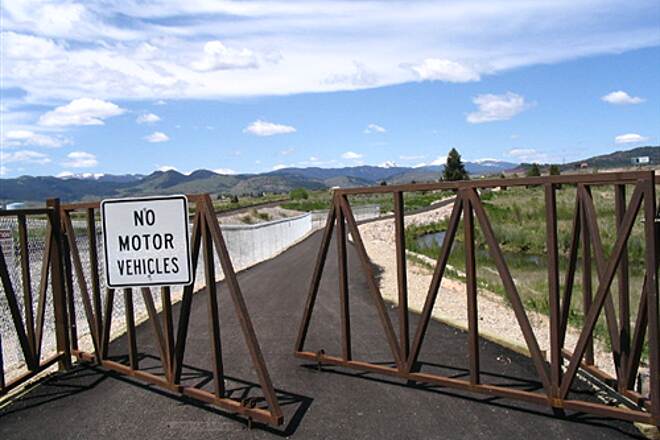 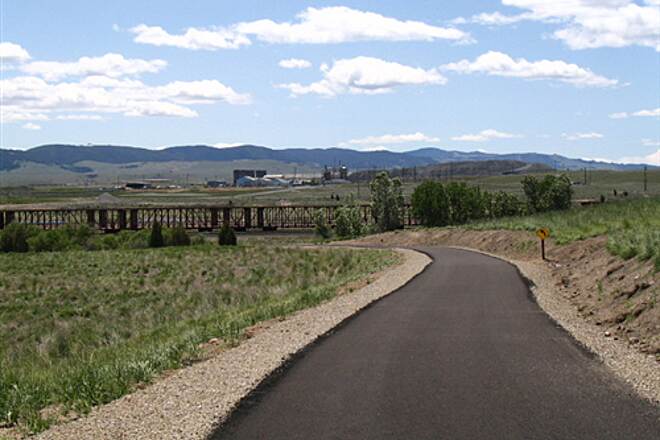 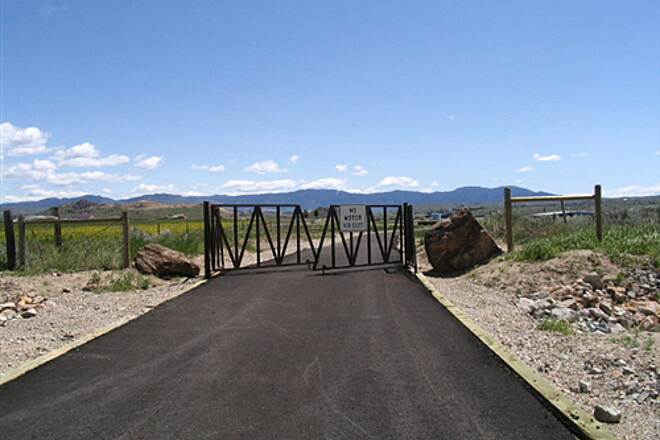 For those who knew what this area used to look like in recent decades, the clean-up effort would amaze you. Rust-colored soils and mine tailings are now sprouting tall grasses, clover and willows. And Silver Bow Creek? Crystal clear.

The planned route will span 26 miles. Currently, 9.2 miles of the trail are open in three disconnected segments, with more segments under construction. The longest segment begins in Rocker, a western suburb of Butte, and travels to the Rocker Depot before continuing west to I-15. It includes several pedestrian bridges across Silver Bow Creek and a pedestrian underpass (below a railroad bridge). The western end has restrooms, drinking water, benches, picnic tables, bike racks, and interpretative signage. More restrooms and water stations are available along the route. View the TrailLink map for all locations and directions.

Only about a mile-long gap exists between this segment and the next. The shorter segment—just over a mile—runs between the Silver Bow and Ramsay communities. Halfway along the route, the trail crosses Silver Bow Creek.

Also known as the Copperway Regional Trail, the third segment is further northwest and meanders along the Silver Bow Creek for about 2 miles. Connecting the communities of Crackerville and Durant, it crosses the creek three times via pedestrian bridges and passes by Blue Heron Lake.

For a longer ride, it’s easy to connect from the Silver Bow Creek Greenway to the BA&P Hill Trail, which leads up to Butte Hill. From the Rocker Depot parking area, travel east about 2 blocks on Grizzly Trail road. When you see the trestle bridge ahead, look for a narrow yellow gravel trail on the right that leads up to the top of the trestle. The BA&P Hill Trail is gravel for the first 2 miles, then paved for the rest of the way uphill, but it gets much steeper at the eastern end.

Parking is available at a number of locations along the trail. View the TrailLink map for all options and detailed directions.

To access the eastern end of the Rocker section, from Butte take Centennial Avenue to Santa Claus Lane and turn west (left). Go under the Interstate and when you come to the first major bend in the road, you will see an access point marked with a gate on the right (west) side of the road. Parking is limited on the dirt shoulder at the bend.

To reach the western end of the Rocker section, continue along Santa Claus Road and turn right onto S. Rocker Road; you will immediately go over the railroad tracks. (Use caution as there is no gate and the tracks are still being used.) A short distance later, S. Rocker Road T-bones Grizzly Trail road; turn left and look for the large gravel parking area just past the IT Club bar on the left.

The Ramsay section has very limited parking at the end of Palmer Street near the trailhead (1-2 cars). You can also park along Palmer Street on the side with the houses but not on the other side of Palmer.

Parking is available midway along the Copperway Regional Trail segment in a gravel lot on Fairmont Road. The northern end of this section also has a very small gravel lot on Crackerville Road/Old Highway 10A.

I love this trail!

This is a great, well-maintained trail that links to some other great trails. I hope the whole system is completed soon!

Location: Butte, MT
Parking: Rocker Station Park, Rocker and Fairmont Road Temporary Parking Area
Trail Condition: Nice wide paved path.
Signage: Directional signage very minimal.
Comments: Went west from Rocker Station to Ramsay. Large pond of water in underpass for direction toward Whiskey Gulch Station, so passed up that section of trail. Some up and down and through the grassland away from traffic. The short section from Fairmont Road north is nicely done, wide path along the creek, several wide bridges, and paved. There are short distances of gravel from the temporary parking areas to the trail. Would do the Rocker to Ramsay section again.

Asphalt trail in excellent condition. New trail access stations at Rocker and Silver Bowe have modern restrooms, drinking fountains, and parking. The Rocker Station at 1208 Grizzly Trail is near the end of the B & P Hill Trail so you can connect to both trails.

rode the short 4.8 section of the trail on a hot windy afternoon. Trail was maintained and had interesting terrain. Winded around a hill and through wet areas, sage brush and some wild flowers. Elevation changed enough to keep it interesting. Negatives-- more dog poop on the trail than I have seen on all the other trails I have ridden put together. The place we started had no water and the bathrooms were locked

For those who love Nordic skiing and train year-round, this is a wonderfully, smooth, safe and interesting trail. There's just enough terrain so you can "change gears" and work on various techniques. Traffic is very light most days, a few bikers and walkers. Come on out, Mile-High Nordic! Let's get these kids training. Skiers are made in the summer...as most World Cup coaches will tell you.

As a novice biker I can attest that this Greenway system is fantastic. Prejudice may prevail since I happen to be a third generation Butte person who happens to be on the Greenway committee. When finished this trail way will be the envy of all Montana communities. The final completion may not be until 2018 but the segments now finished provide excellent biking and walking.