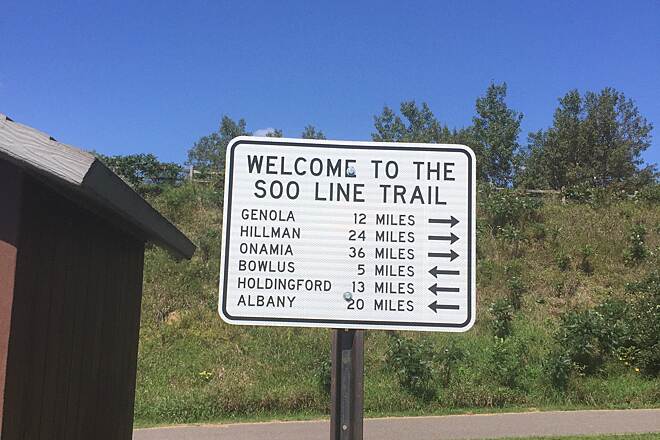 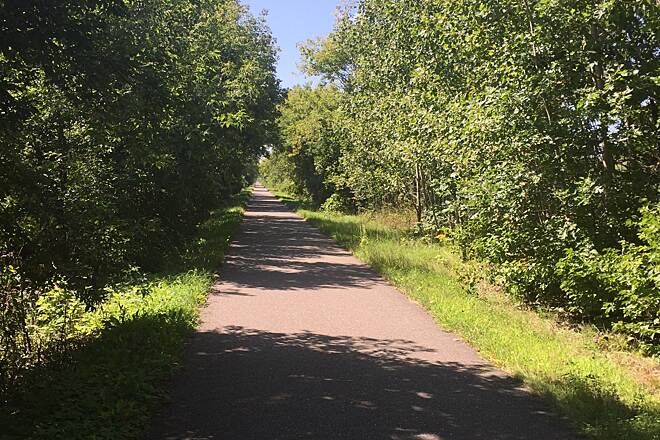 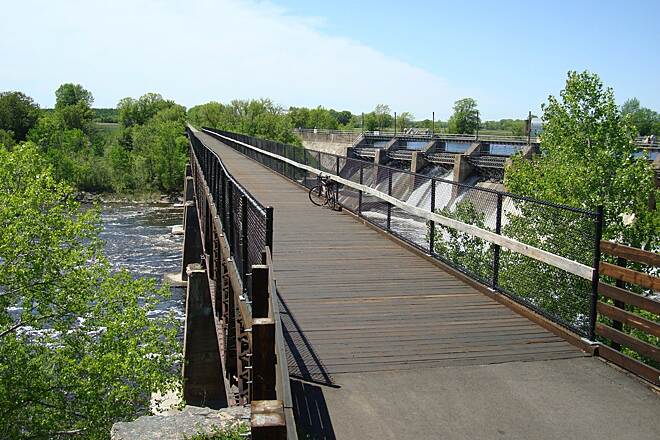 View Trail Map Send to App
The Soo Line Recreational Trail is a continuation of the Soo Line Trail (southern route) just north of Royalton, Minnesota. This 10-mile segment, however, does not permit motorized uses, unlike its connecting segment to the northeast.

The Soo Line Recreational Trail continues southwest from Royalton along the abandoned railroad corridor to meet up with the Lake Wobegon Trail just north of Holdingford at 450th Street. The trail crosses the Mississippi River at Blanchard Dam, passing among farmland, wooded areas and creek bottoms. The trail runs through the small community of Bowlus just south of midway. The Stearns County portion (at the Lake Wobegon Trail end in Albany) is being developed as the Dairyland Trail.

You can access the Soo Line Recreational Trail just north of Royalton at US 10 and Township Road 316/83rd St., where you'll find a large parking area. There is a small parking area on the west bank of the Mississippi River at Blanchard Dam (access via Great River Rd.). Parking is also available in Bowlus south of Main St near its deadend on the east side of town.

Will Bike for Pie!

We loved our ride on the first half of the Soo Line southern trail. Due to a late start, we parked at the lot off of Highway 10 about 2 p.m. At first we were dismayed at the number of ATV trailers because we’ve been on shared trails before and they are not my favorite. Fortunately, the southern trail is all paved and non-motorized, so there was nothing to worry about! The trail is flat and well maintained. The only hill is the one out of the parking lot LOL! It varies between open farmlands and tree-lined woods. There was a nice breeze to keep us cool and enough shade for the hottest of summer days. There are three wooden bridges to cross that are a wee bit bone-jarring, but the views of the Mississippi are wonderful! Everyone told us to stop in Bowlus - a charming town with a nice community center with bathrooms, and you must stop at Jordie’s trail side cafe. The food is great! They have outdoor seating with lots of room between tables and a beautiful waterfall/pond. They serve lots of ice cream and pie, hence the title of this review. There’s ample parking in Bowlus as well, so we’ll start from here the next time and hopefully make it to Holdingford.

This trail is ideal! It runs through mostly wooded areas to keep you shaded but does also have several spots through grasslands! Perfectly flat and wonderful!!

What's not to Love?

I had been on the Lake Wobegon trail many years ago to where it dead-ended north of Holdingford. Now I finally made it back to ride the extension to the Mississippi River and back. For added thrills I also rode to Albany for lunch and returned.

There seem to be at least 3 trails in Minnesota that use the Soo Line name so it gets a little confusing. This one is an extension of the spur line of the Lake Wobegon trail, starting a little north of Holdingford, which is itself north of Albany, which is on I-94 west of the Twin Cities.

Holdingford has a nice trailhead with all the facilities and a real-life boxcar for added atmosphere. The transition from Lake Wobegon to Soo Line trail is seamless.

The trail is wide, smooth, and has only a couple road crossings of any consequence. The Mississippi River bridge is quite spectacular; I stopped and took in the views of the river and dam for a while. Shortly after that I came to the end of the paved trail where it changes to ATV use. There's one highway bridge where both kinds of vehicles are allowed, but I didn't see any ATVs while I was there, and I doubt that there are many conflicts.

The northern trailhead was not as well-appointed as Holdingford, but still had the basic facilities. There was also a nice trailhead mid-trail in Bowlus.

It's a nice smooth ride with great food at Jordie's along the way. Worth a visit.

Flat as a geometric plane

I loved this trail. Nice, clean and flat. It gives a good view of the countryside as you traverse the miles of trail. I had no clue where this ended as it flawlessly merges with the Wobegon trail for way more mileage that I could have done in my short timeframe. There are multiple little wooden bridges. I took a little rest at Bowlus. Wish I had time to stop by the little café I saw. I would definitely ride this one again!

My wife and I just rode the trail from Royalton to Holdingford. Really great scenery along the way. We saw deer, I saw what I believe to be an osprey at the Mississippi River, with a fish in it's talons(didn't see it long)! Lots of shade along the way.
The trailhead is just over 3 miles, out of Royalton. You cannot miss the beautiful bike bridge going over Highway 10.
The distance from the Royalton Trailhead, to Holdingford is 13 miles.
Get out and enjoy. Well worth the trip!!
Jeff

We started from highway 10 heading west. If you start at 8 or 9am you get maximum shade but it is well shaded with deciduous trees much of the day. The rolling farm fields and sloughs and afew creeks provide for a beautiful ride. We stopped at Jordie's in Bowlus but they only serve their buffet breakfast until noon. However the 1907 hamburger will not disappoint but you better be hungry if you choose 2 patties! they also have ice cream.

watch out for snow!

Our first bike ride of the season came on 4/27/13 on the first warm sunny day. What we weren't expecting was the snow covering the trail at several locations! We found the scenery nice and the ride pleasant and will be back again when ALL the snow is gone!
Word of advice: don't wear open toed sandals, your feet will get very cold :-)

I rode this from the end of the Lake Wobegon Trail until it ended at the start of the ATV trail at hwy. 10. There is parking and facilities in Holdingford and Bowlus and a pit toilet and parking at hwy 10. The trail is flat and crosses a few streams and the Mississippi on a high bridge. The bridges on this trail are very rough since the planks are cupped. The bridge over the Mississippi is very near a dam and that makes it interesting. There is some shade on this trail but not a large amount. You'll ride past swampy areas and farm fields.
Even with the rough bridges I liked this trail.