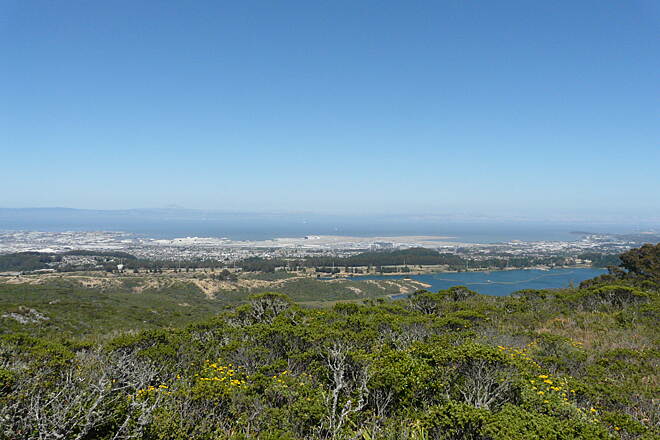 The Sweeney Ridge Trail is one trail of many in beautiful Sweeney Ridge, a prime bicycling and hiking area in San Mateo County. Inaccessible by automobile, the trail must be reached by any of its connecting trails: Sneath Lane Trail, Baquiano Trail, Mori Ridge Trail or Notch Trail (hiking only).

Sweeping views of the surrounding hills and the Pacific Ocean in the near distance bring hordes of visitors to the trail. Two destinations also attract hikers and cyclists: the Portolá Discovery Site marks the approximate location where a Spanish explorer discovered the San Francisco Bay in 1769, while the remnants of a Cold War era Nike missile site commemorate a very different time in history. The Sweeney Ridge Trail is paved between the two landmarks, while a natural surface welcomes the same user types at either end.

The Sweeney Ridge Trail can only be reached on foot, horse or bicycle. Park at one of the trailheads for the Sneath Lane Trail, Baquiano Trail or Mori Ridge Trail to access the scenic path by car. (Refer to the individual TrailLink pages for exact parking locations.)

I've been up here twice so far, and I plan to visit some more times. The first time was June 2012, and I had some time constraints. I hiked up from the trail head at the top of Sneath Lane. I started in the early afternoon and reached the ridge in about an hour and a half, taking pictures of plants and birds along the way. I headed back down after taking in spectacular views from the Portola Discovery Site. I was sorry I was short on time and made a promise to myself to return. A couple of weeks ago (in August 2012), I decided to take my bike up the hill. I parked on Sneath Lane, just west of Skyline Blvd. I rode my bike up the hill to the trailhead. The entrance around the gate is a little tricky to get a bike around. You have to get off the bike, and either lift the bike or maneuver it on it's rear wheel around the pedestrian opening next to the gate. The ride up the hill starts out easily enough, but about 3/4 of the way to the top it gets pretty steep. I think I'm in reasonably good shape, but I had to walk my bike for about 150 yards at one point. A pretty good head wind was also blowing down the trail from the west when I did this ride. When I was able to get back on the bike, I made it the rest of the way to the ridge. I took a comfort break at the bathroom and caught my breath before heading up to what is left of the Niki Missile base. Then I decided to ride down the Mori Ridge Trail into Pacifica. The Mori Ridge Trail starts off as a pretty easy downhill slope, but it gradually gets pretty steep in places. It's a good idea to feather the brakes in a few places so you don't lose control. There is a gate near the bottom of the trail on the Pacifica side that you don't want to crash into. Once you get your bike through the gate, there is only about 1/4 mile to Highway 1 in Pacifica. At this point, I decided that I wouldn't make it back the way I came without walking my bike up several of the hills. I chose to go north on Highway 1 until I reached Lindy Way. I continued north until I got to Sharp Park Road. I still had a climb, but it wasn't too bad. I made one mistake and accidentally went past Skyline Blvd on my way back. I should have made a right on Skyline Blvd. back to Sneath Lane. If you do this loop, try not to make this mistake like I did, or you will have to backtrack and do some pretty tough climbing. If you notice that Sharp Park Road has turned into Westborough Blvd., you went too far. I think this is a really nice ride, in spite of the tough part of the climb, just before Sweeney Ridge. I plan to visit again in a month or two, before it gets too cold. It can get windy, and heavy fog can pour over the mountain ridge like foam on beer. Riding up the hill will help keep you warm, but carrying an extra long-sleeved T-shirt can make things a little more comfortable.