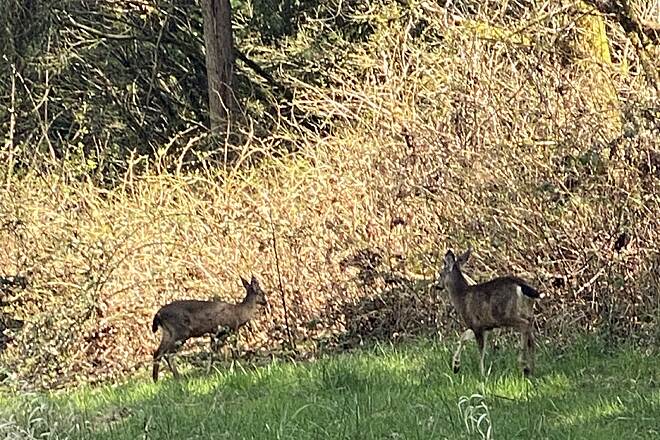 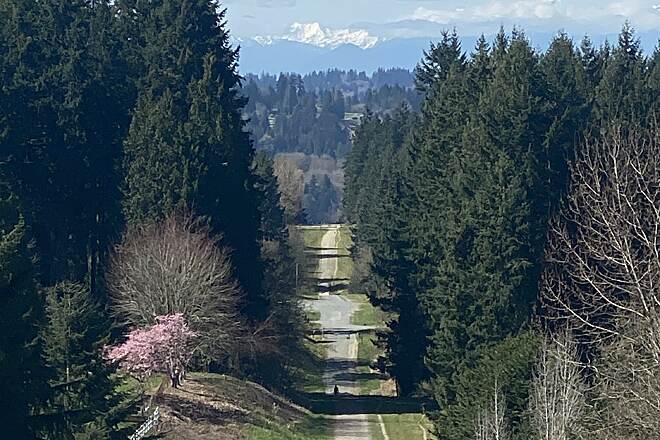 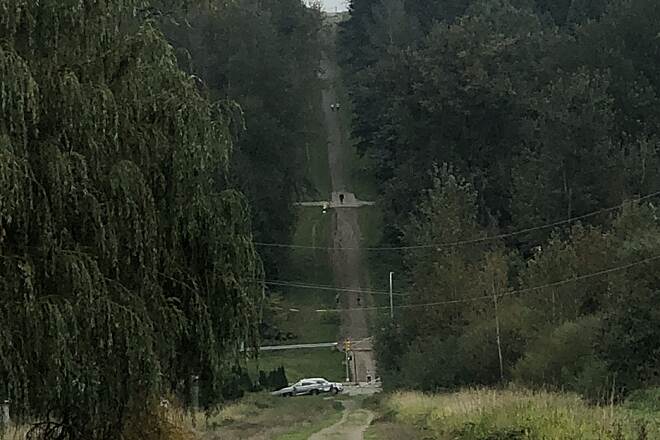 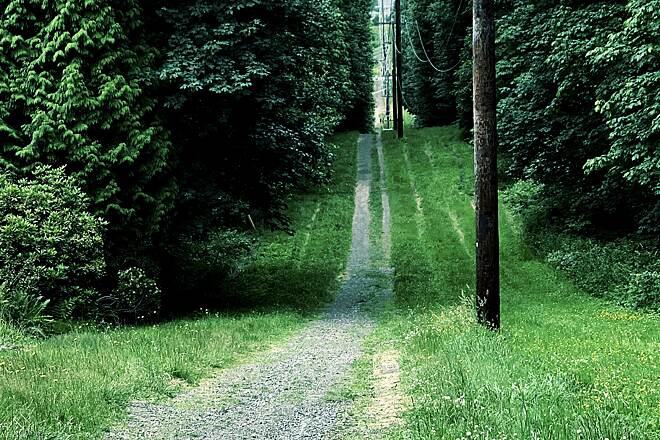 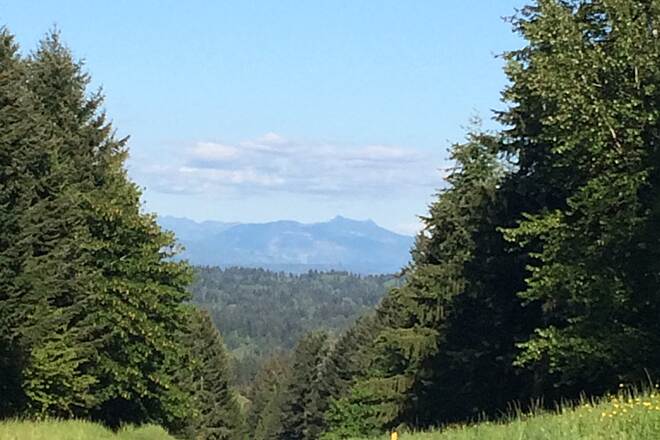 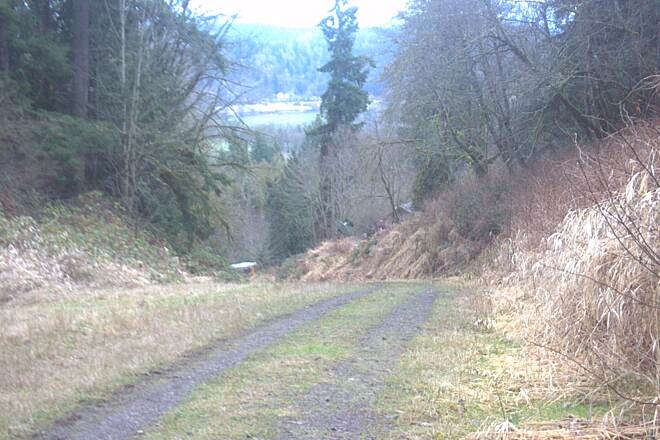 View Trail Map Send to App
The Tolt Pipeline Trail serves as a major connection between Duvall, Washington, and the Sammamish River in Bothell. The trail follows a water pipeline right-of-way and is not recommended for all trail users. The majority of traffic consists of mountain bikers and horseback riders. Due to the many steep grades along the trail, as well as the gravel and dirt surface, bicyclists must be aware of the limitations of their equipment.

Conveniently, the Tolt Pipeline Trail's western terminus in Blyth Park ends very close to both the Sammamish River Trail and the Burke-Gilman Trail. It moves eastward on an ungraded surface, making the many hill climbs an intense workout. Additionally, the wide cut of the pipeline's right of way (up to 100 feet) provides little escape from the sun.

At West Snoqualmie Valley Road NE, riders can continue via street access to Duvall's portion of the Tolt Pipeline Trail at nearby Duvall Park. Just to the west of the park, the trail directly connects to the Snoqualmie Valley Trail.

Parking for the Tolt Pipeline Trail can be found at the Northshore Athletic Fields on NE 145th Street/State Route 202 in Woodinville. Alternatively, park at the Kathryn Taylor Equestrian Park on 232nd Avenue NE in Redmond.

Trail Map Incorrect on Traillink.com - No Trespassing on 133rd St.

We rode this a few days ago to get between the Sammamish River Trail and the Snoqualmie Valley Trail. I was on a road bike, and needless to say I had to walk the first hill, but the trail is otherwise pretty rideable. There is one weird part near Snoqualmie Valley Road, when you take NE 133rd Street to get down the hill. 133rd street has signs saying "no trespassing" and it's unclear if bikers are actually allowed there or not.

Three Things to Look Out For

1. If you are cyclist, don't bring a road bike. You'll need a gravel bike or mountain bike. The first hill is very difficult, about a 12% grade. A road bike will not be able to do this on a gravel path.

2. Many people walk their dogs on this trail...off leash. A majority of dogs are friendly, however I did have a black lab chase me down on the trail. Be careful.

3. Watch out for horse poop.

We recently moved to Hollywood Hill unaware of the Tolt Pipeline Trail. It's a wonderful resource for our local community and very accessible from a number of points. It's very wide (30 ft+) and open and shared by families, dog walkers, horse riders and bikers. It is hilly, undulating and steep in some places so you need to be in general good health. If you join the Trail close to the Hollywood School House roundabout/traffic circle, where there is public parking by the Sammamish River, expect a very steep 5 minute walk up until the trail starts to flatten out. So if you have walkers who would struggle with that I would join the trail up on the hill. We use the trail all the time with our dog and teenagers. We haven't had the time to go all the way to Duvall but it's a very popular and enjoyable space for everyone. It is not paved but is grassy or graveled. It passes houses, farms, horse acres and on a clear day has beautiful views toward Seattle to the West and the mountains to the East.

I checked out the Tolt-Pipeline trail a few months ago in search of a nice gravel ride not too far from the city. I read the prior reviews stating that it was pretty hilly and not good for children. Feeling I'm a pretty "fit" cyclist, I threw caution to the wind in hopes of a good scenic work-out. I started from the baseball fields where there's easy access to the Tolt-Pipeline trail via the Sammamish River Trail. To save a headache, take a right onto the trail from the parking lot, or else you'll be heading the opposite direction which takes you down by the waterfront. As you pedal along the Sammamish river trail, look for a sign (I believe it says "Tolt-Pipeline Trail") and dirt road that branches off to your right. Traverse the dirt road and cross the busy street at the end. The next part is arguably the most difficult part of the trail, where you'll proceed up a pretty steep grade with your bike over your shoulder. This part had me confused as this wasn't mentioned in any of the reviews and I felt like it was intense enough of a climb with a bike that it should have been, so maybe there's an easier way to access the trail further up somewhere. Once you reach the top you're greeted with a wide gravel road and rolling hills. This trail navigates past multiple farms which makes for an enjoyable experience. Chances are you'll be sharing the road with horses, so make sure not to spook 'em. The remaining hills, while not as intense as the first, will have you out of the saddle most of the time in granny-gear, so be warned. I would not recommend doing this on a skinny tire! The gravel is course here. I was on a road bike with medium 650b tires and was wishing they were wider at points. The trail mellows out at points and there's a few scenic stops ("Bear Creek" comes to mind, which is about the point I decided to turn around). On my way out I encountered some unsavory folk hanging out on the concrete driveway that you cross over on that big initial hike-a-bike hill-climb. I had decided to ride down the steep grade, which given my bike has side-pulls it wasn't the smartest decision, but I was up for it. As I got towards the concrete driveway I had released the brakes to jet past the guys I was convinced were going to try and jump me (it was pretty obvious they were up to no good and waiting for me to come down...) I had gained so much momentum from that I had barely stopped before hitting the gate at the bottom. So, words of advice: fat tires and disc brakes are a plus, but not necessary, carry pepper spray or bring your martial arts a-game, and be prepared for some steep grades! Have fun!

Nice trail but not as much fun on a bike, vs hiking. A lot of hills on gravel. Wide trail but not connected in a few places, so road detours are required.

The Tolt Pipeline trail offers up a fabulous workout for mountain bikers and hikers with numerous climbs and descents, some quite steep. If you are a mountain biker, you should have disc brakes if you do the big descents. Also be careful going through the numerous gates by minding your speed lest the gate smite thee! There are several good parking spots on the section between the Sammamish River Trail and the Snoqualmie Valley. If you venture east of Duvall the trail is more isolated and equally beautiful with frequent deer sightings.