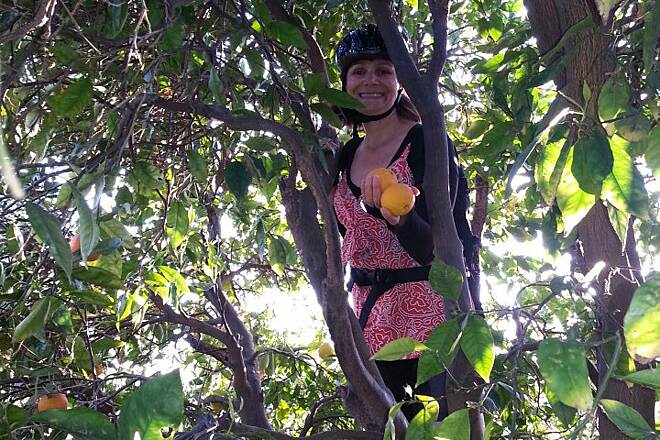 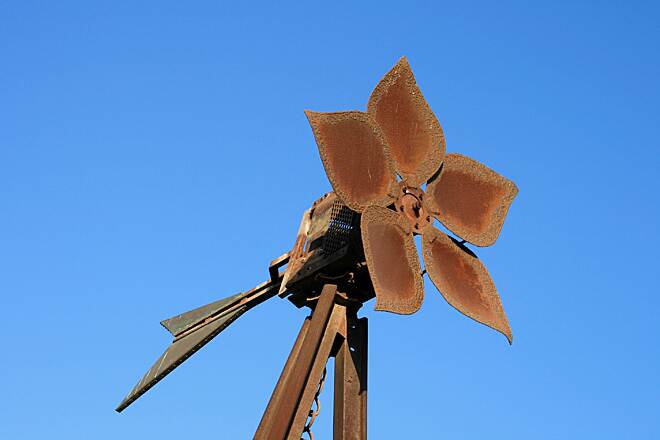 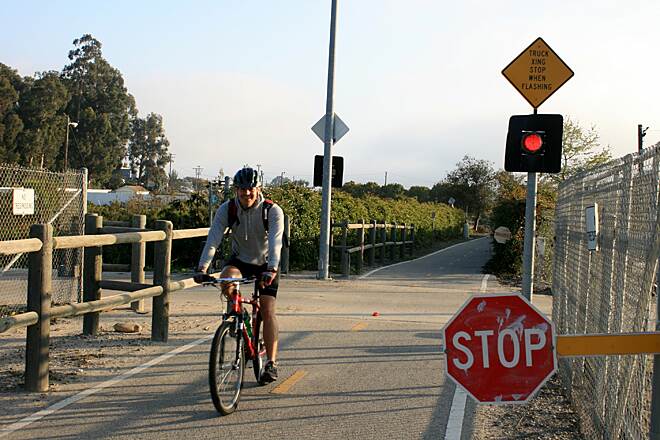 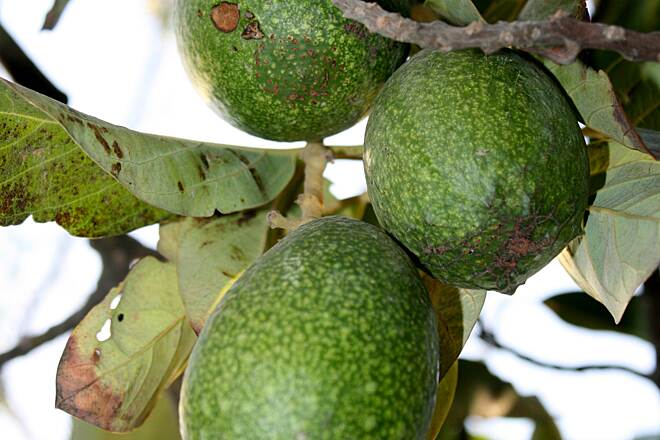 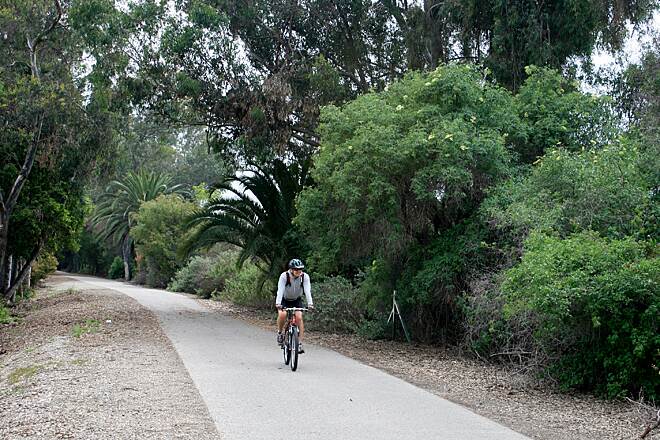 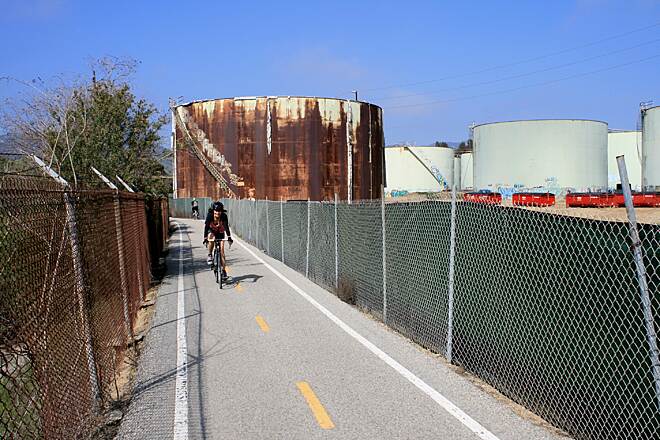 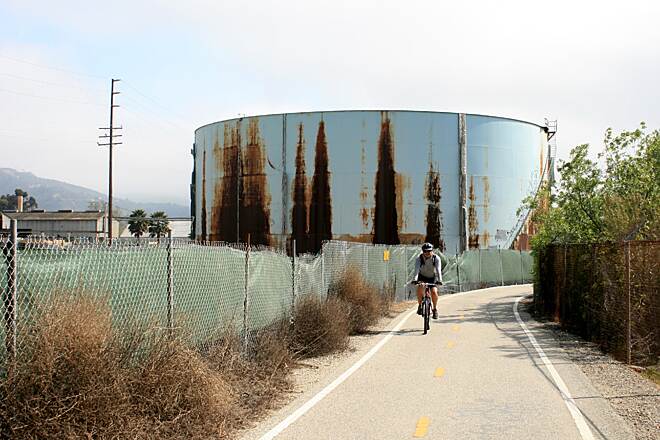 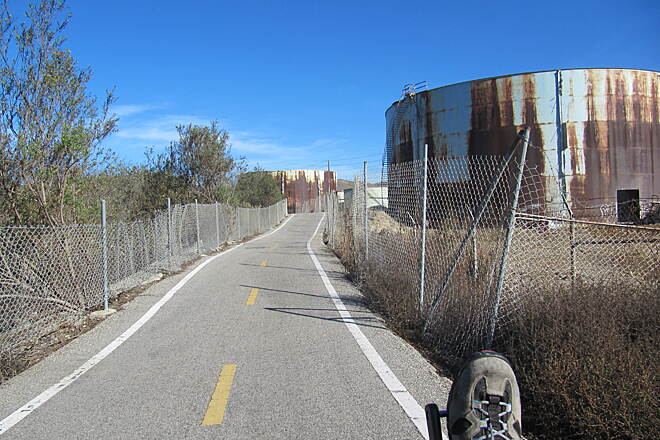 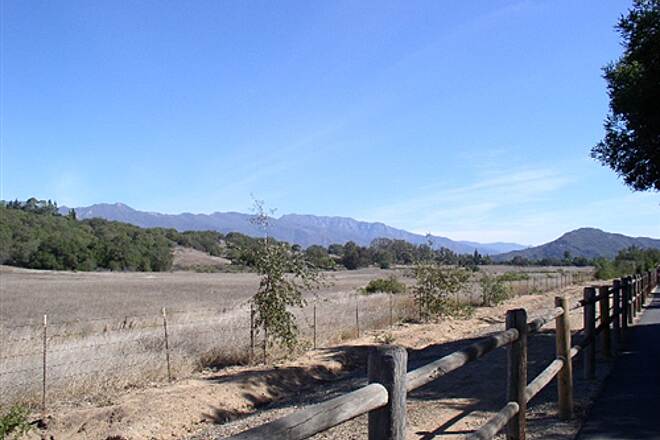 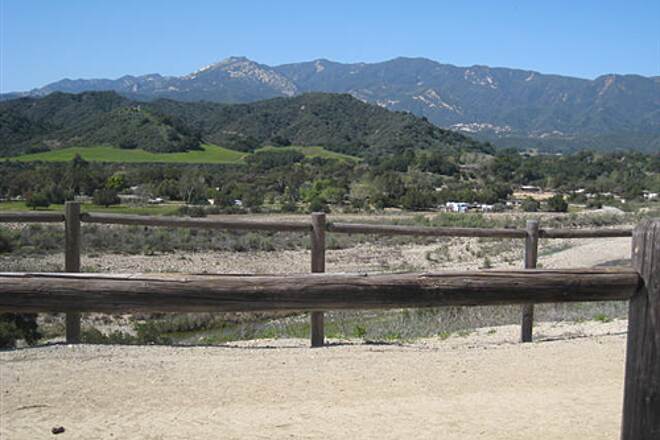 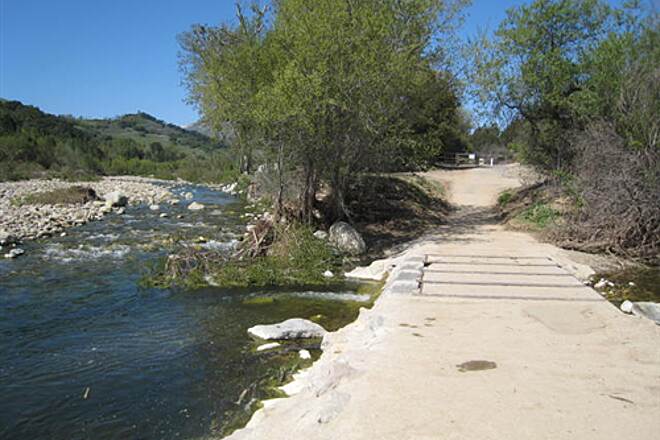 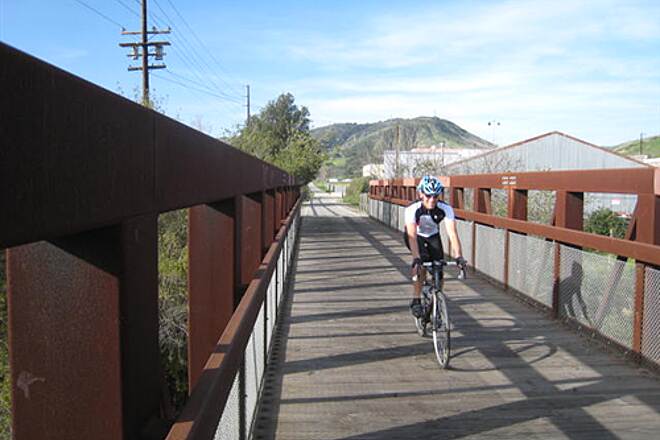 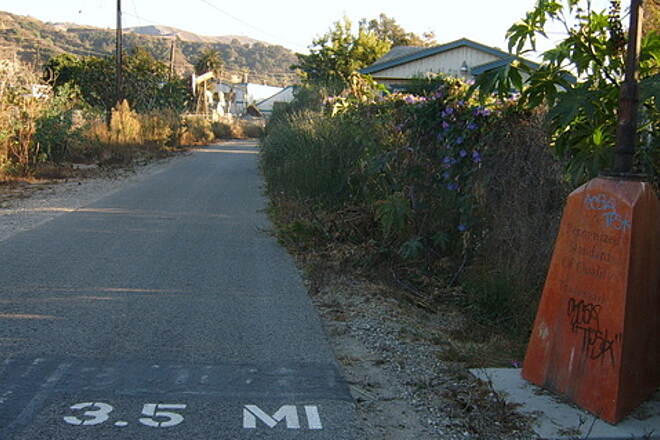 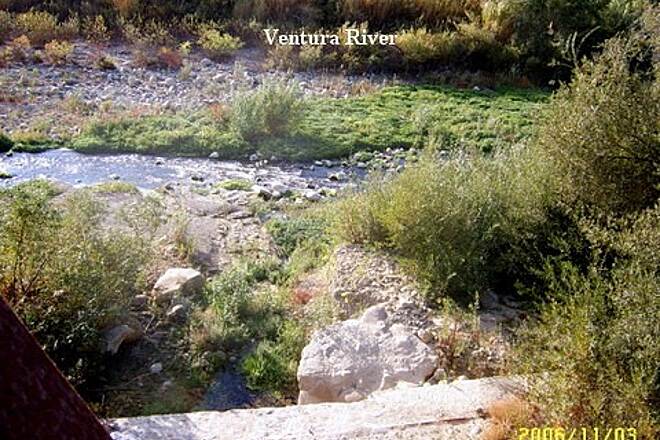 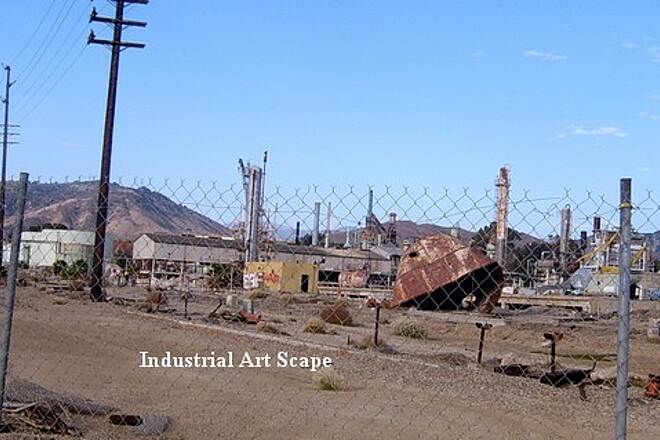 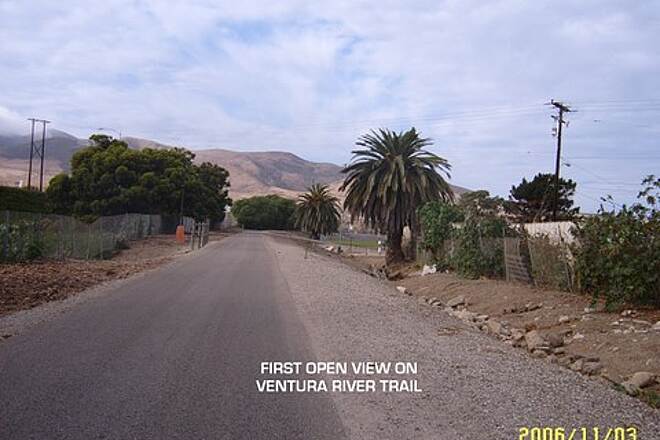 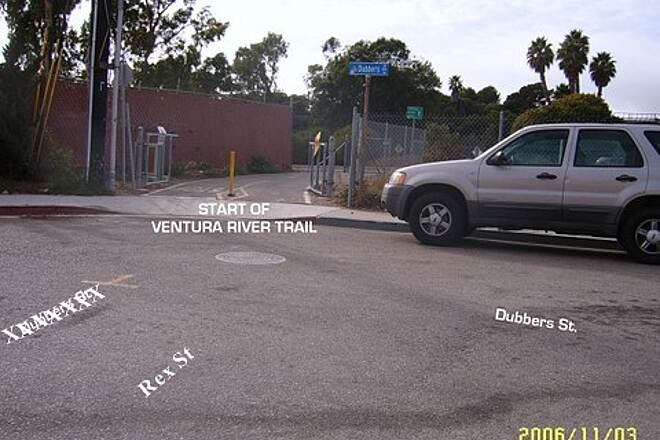 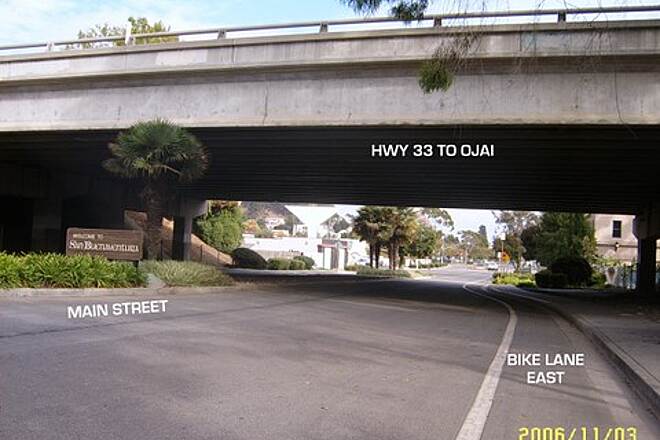 The Ventura River Trail follows the former Ventura and Ojai Valley Railroad right-of-way, from just north of Ventura to Casitas Vista Road at Foster Park northeast of town. Here the trail continues to Ojai as the Ojai Valley Trail. The Ventura River Trail has a distinctly industrial feel to it, and it gives trail users a close-up look at the many businesses (both past and present) that have fueled the region's growth. Opened in 1999, the trail links the Ojai Valley Trail and the Omer Rains Coastal Bike Trail (via a short, signed trek on sidewalks or bike lanes) for a spectacular 17-mile urban bike ride that extends from historic Ventura Pier to downtown Ojai.

The Ventura River Trail parallels State Route 33 and Ventura Avenue, but the roads are not always visible. Beginning at the southern end and heading north, you pass a variety of features from the area's natural and industrial heritage, including an impressive wall of sedimentary layers exposed by the Ventura River, active and abandoned industrial sites and the occasional oil derrick. It may not be the most scenic stretch of trail you've experienced, but it is certainly interesting.

The route is marked by a series of curious art installations that incorporate various themes related to Ventura. Installations include "A Delicate Balance," bronze great egret and brown pelican sculptures; "Orange Trace," clusters of painted bronze oranges arranged to look like they just fell from a freight car; and "Win*Pin," a windmill/pinwheel hybrid sculpture that incorporates the poinsettia, Ventura's official flower.

By the time you reach the trail's midpoint, the scenery transitions slightly as it winds along pastureland and an equestrian path, with the Ventura River on one side and Ventura Avenue on the other. The trail is paved and in good condition, crossing roads occasionally. Bicycle and pedestrian traffic on the trail is fairly light in the springtime but picks up in the summer.

Like most rail-trails, the Ventura River Trail is a very comfortable ride, though there is a slight uphill grade from Ventura to Foster Park. Foster Park is a lovely linear park along the Ventura River and a popular spot for family barbecues on weekends. (It gets very busy on holidays!) The park has restrooms, water fountains and parking, which makes it a good starting point, though there is an entrance fee.

If you're visiting Ventura for the first time, you may want to check out any number of interesting sites. Ventura's City Hall (the town is officially called San Buenaventura), a 1912 marble and terra-cotta Beaux Arts building, provokes memories of a long-gone era in the Central Coast. The Ventura Pier, built in 1872, is Southern California's second-oldest pier and a great place to watch the local surfers catching waves.

To reach the southern trailhead, take exit 71 from US 101 onto W. Main Street and head east. Take a left (north) onto N. Olive Street. Turn left again (west) onto Rex Street. The trailhead is at the intersection of Rex and Dubbers streets. Street parking is available nearby.

The old Petro Chem plant which is pictured in the main photo is now (Oct. 2020) being cleaned up. The area is almost cleared and cleaned. What an improvement. Time for a new feature photo.

The Ventura River Trail and the Ojai Valley Trail combine to allow a bicyclist to ride from downtown Ventura to downtown Ojai. It is a very nice ride. The trail goes slightly uphill from the coast to Ojai (approximately 800 feet of elevation gain). Suitable for all ages and abilities.

The trail section through Ventura goes through the industrial area initially constructed during the heyday of the oil boom of the 1920s. Not beautiful; but still interesting. Foster Park, approximately 6 miles from the start in Ventura, is an excellent rest stop (bathrooms, water, views of the Ventura River). Just above Foster Park is a very cool bike bridge at the Ventura River. The remainder of the trail to Ojai offers beautiful views of the mountains, the river valley, and broad landscapes. Libbey Park in Ojai has water, bathrooms, shade, and playgrounds for kids.

The coast end of the trail connects to the Omer Rains bike path which will bring cyclists to the beach. Plenty of options for a full day of cycling and enjoying the Ventura and Ojai areas.

The bike trail is Class I and car-free. However, there are streets that cross the trail and cyclists must be cautious and stop at every crossing if there are cars.

well maintained through an ugly area

The trail is kept up, but until you reach the Ojai trail, which is essentially an extension of this one, you go through some typically ugly southern California terrain, past oil derricks, storage depots, and scrub.

Next time, I'll skip this trail and just about five miles up at the Ojai trail.

Also, Rex St has no street sign; it's just past the 33 entrance as you drive up Olive.

its a short trail, narrow at times but well maintained, I did not start at the beach, I started at the trail head off of a side street. If you are familiar with Ventura and its oil hayday then this portion of the trial will remind you of it. the trail links nicely with Ojai Valley trail

For me, the two previous times that I have used the path, parking on Main St and riding up Olive Ave is the best way to go, Main St has a bike shop right there near Olive and it is a short ride up Olive to Rex to access the bike path.
There is also a strange park right as you enter the path. Lawn bowling on steroids. The bike shop is Ventura Bicycle Depot 239 W Main St Ventura 93001