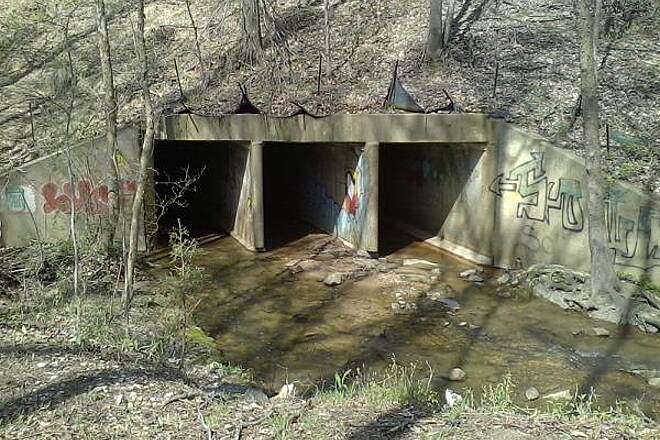 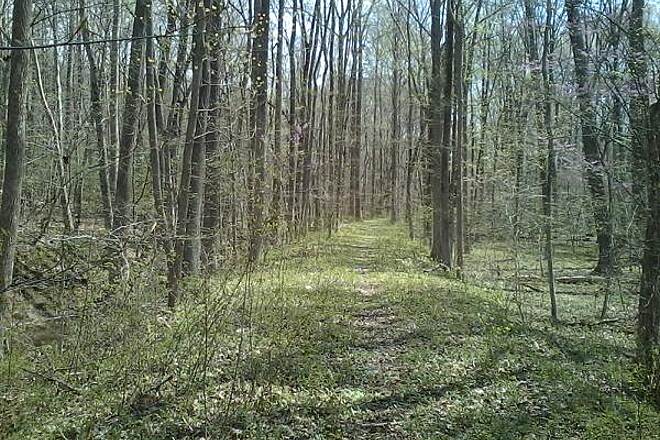 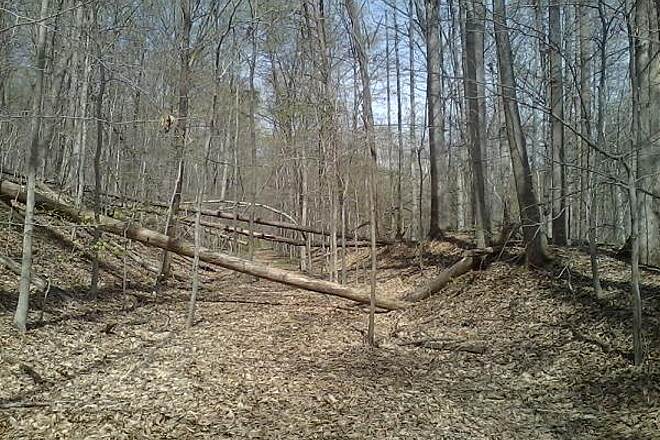 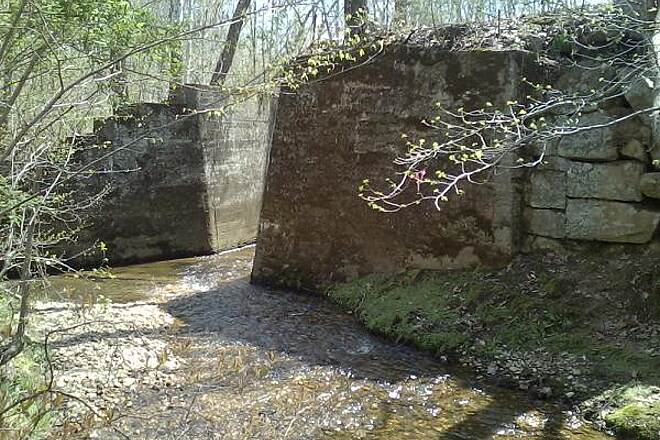 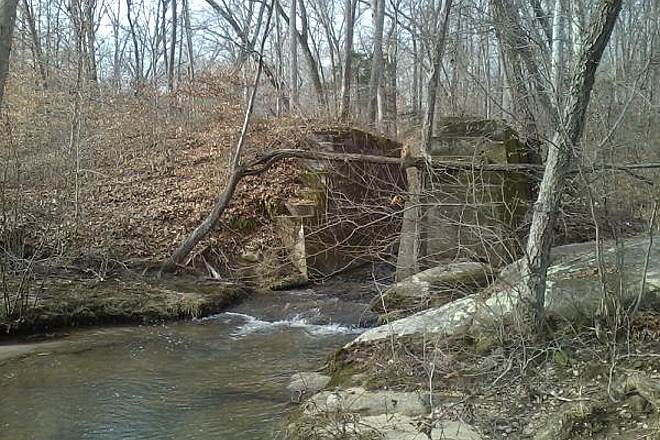 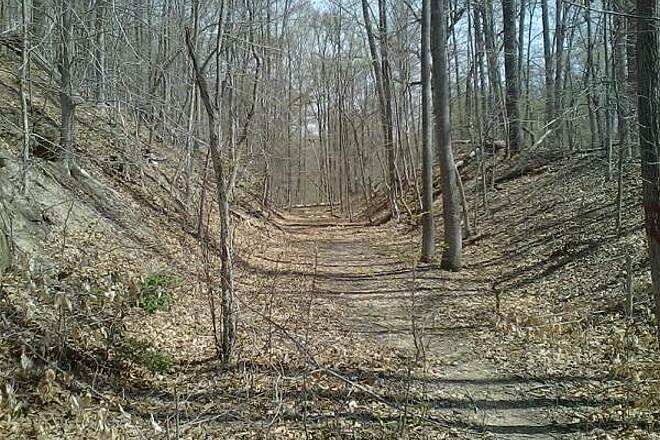 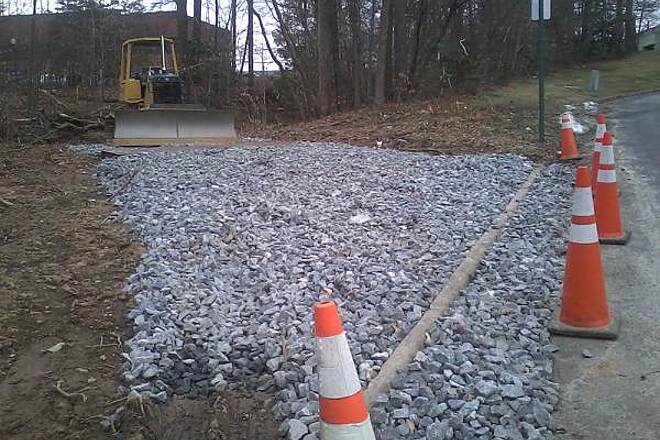 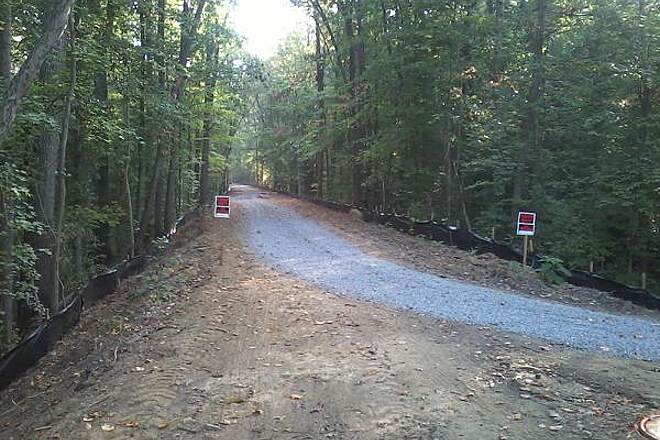 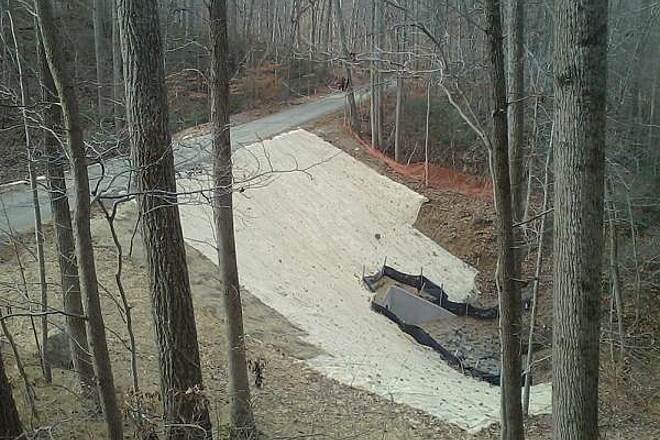 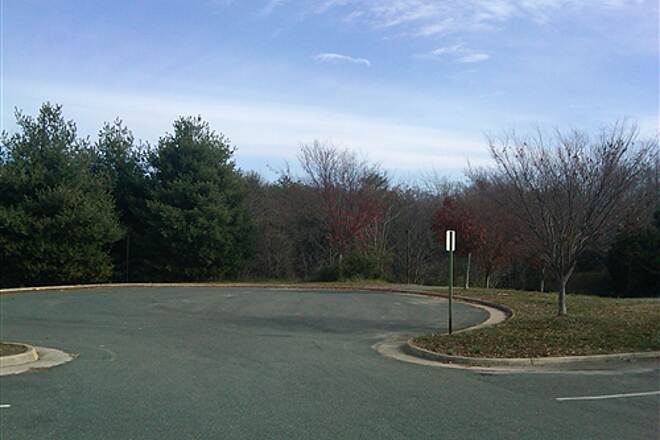 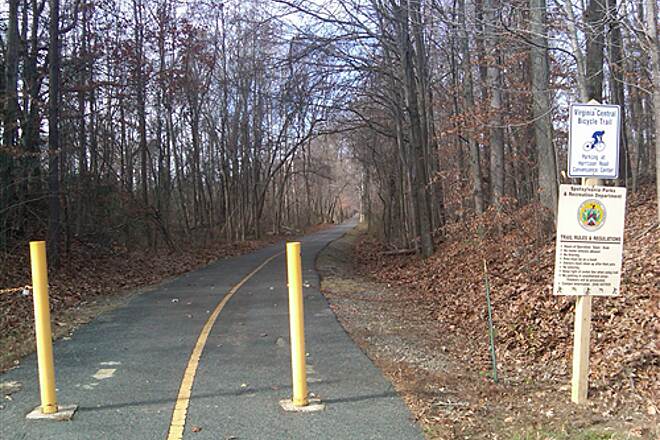 Situated midway between the nation’s capital and the Virginia capital of Richmond, the Virginia Central Railway Trail will one day offer more than 30 miles of trail from downtown Fredericksburg west to the town of Orange.

The railroad for which the trail was named began in 1857, but wasn’t completed until 1877 due to the Civil War. The future trail will follow the former rail line, connecting three major Civil War battlefield sites in Fredericksburg, Chancellorsville, and Wilderness. Each is a National Park service site with its own network of trails.

As of summer 2015, the trail offers more than 4 miles of trail across two disconnected segments: one from downtown Fredericksburg to the Idlewild neighborhood and the other in nearby Chancellor.

To access the western trail segment: Enter the Harrison Road Convenience Center at 5917 Harrison Road in Fredericksburg, and turn right toward the ball fields at the top of the hill. The trailhead is at the far end of the parking lot.

Great for daily walks in around the city. One downside...you have to cross RT 1 to finish up the last .75 miles of the trail. A bit of a pain, but overall, it's a nice round trip walk.

Trail is paved and marked. Great views of creeks and wooded areas. Ran while our three youngest rode their bikes. She’s 7,8 & 10.

Almost not worth it

Sorry, can't give this one good marks. Parked at the F'Burg end near the train station. lot is marked for trail parking only but only one or two spaces available. Since none of the cars had cycle racks and I only saw one walker and one bike on the trail my guess is it's unenforced commuter overflow.
On the plus side, the trail is nicely marked out, flat and has nice gentle curves but you barely get up to speed before you have to stop at a major roadway intersection (Blue & Grey Pkwy) then again at Rt.1. The crossings are signal controlled but the right turning lanes are not marked "no turn on red" so be careful.Considering the whole trail is only 2.6 miles you spend almost as much time parking and waiting at lights as you do riding. At the end, the trail just dead ends so the only option is to retrace the route back. Otherwise the trail goes thru some pretty woods and over a few small bridges.

The Good Trail and the Bad Trail

Rode both trails on a road bike on 10/10/2016. The trail section in Fredericksburg is 2.6 miles long and paved. This is a 5 star trail running along Hazel Run for a good part of the trail with plenty of forest sections even though it starts in the city. Benches are set along the trail and there is a bridge and even an observation deck at the 2.0 mile marker. Very professionally done and well maintained. Hopefully the next extension will soon be started adding another mile and another bridge (the bridge is funded but no start date has been released). The second section which is not connected is in Spotsylvania. It is 2.1 miles and paved though the paving is not in good shape. Maintenance has been poor with cracks and ridges in the pavement due in some cases to trees and their roots being too close to the trail. There was a rotted tree across part of the trail this day. The path from the parking lot to the start of the trail went from paved to gravel and then back to paved. There was also a curb to climb before you could get on the path. No benches, just two posts and a board across in a few places. It's a shame that what could be a 5 star trail is at this time only a 2 star one with what seems like little desire to maintain and/or lengthen it.

Not what the pictures represent

This was a paved trail which was nice. While I didn't measure it, it seemed much shorter than 4.2 miles. Maybe it was 4.2 with the return trip along the same path. Very nicely covered through the trees which was picturesque. Over all enjoyed the trail.

It's so nice to be able to get downtown for holiday parades and events, the Farmer's market, and all the restaurants and shopping in downtown Fredericksburg without having to battle biking on the roads in traffic! It's beautiful in all seasons, quiet and hooks up to other points of interest too like Alum Creek Park and the River Heritage Trail. Love it! This is a great app, too!

I've been riding from the Idlewild trailhead to the train station, great smooth ride, and its a really easy, safe way to get into downtown Fred and the Rt 1 and Rt 3 crossing save you from having to dodge 50 mph auto traffic. Hoping to see it continued west under 95 in the future. Great ride for kids, too.

The VCR trail from downtown Fredericksburg and through Alum Spring Park to US 1 is scheduled to open early summer 2014.

Ground broke early 2014 to continue the trail west of US 1, terminating (for now) near the Idlewild subdivision of Fredericksburg.

rode this trail with wife and kids, was a very nice ride. just a little confusing as you have to travel down a 4 lane road to cross at a light to continue along trail. still an exceptional ride, not busy and covered the whole way by trees. will definitely ride this trail often.

Alum Springs Park to I-95

I just hiked the 2 mile section from Alum springs to I-95. This is a very nice section and I hope to see it open to the public soon. A few trees down are easy to get around, but two stream crossings make it a challange to keep your feet dry. One day with a couple of people and a chainsaw could make this a nice hiking trail with very little effort. There is a tunnel under 95 that can be used to continue but waterproof boots are a must unless you want to end up with wet feet. I would love to see this section connect up and contiue through the battlefields. There is a huge amount of potential here and it's great to see so much undeveloped woods in the middle of Fredericksburg.

nice trail should extended to realize it's huge potential

This trail built along a portion of the old Virginia Central Railway right-of-way which was abandoned in 1938 is a very nice paved path. It is perfect for biking with kids because it isn't very long and is, of course, very level; also, there is a playground and open fields for the kids at the trailhead. It is also great for running or jogging and there are several geocaches hidden along the trail.

But the real beauty of this trail lies in its potential. The Virginia Central ran from downtown Fredericksburg 38 miles west to the town of Orange. It passes through three separate Civil War Battlefields (Fredericksburg, Chancellorsville and Wilderness) each of which is now managed by the National Park Service and has its own network of trails.

If the Virginia Central trail is extended to connect these battlefield parks, it would be a fantastic boon to local users and visitors to the area!