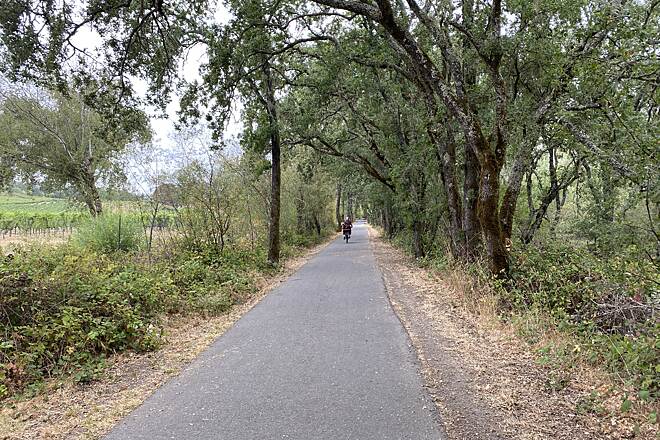 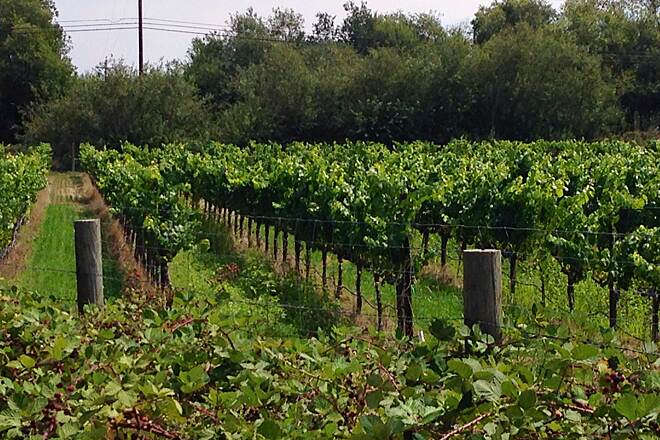 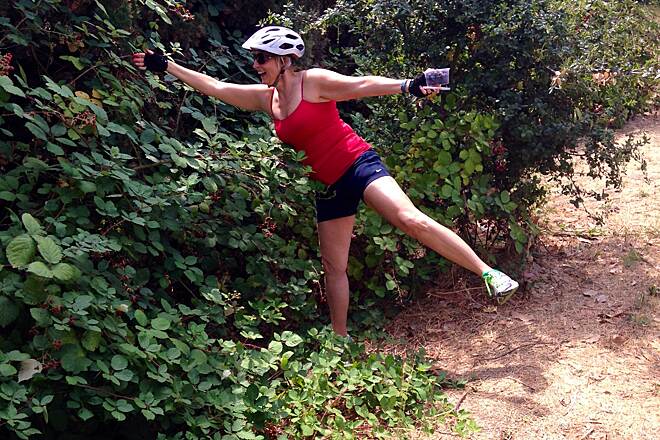 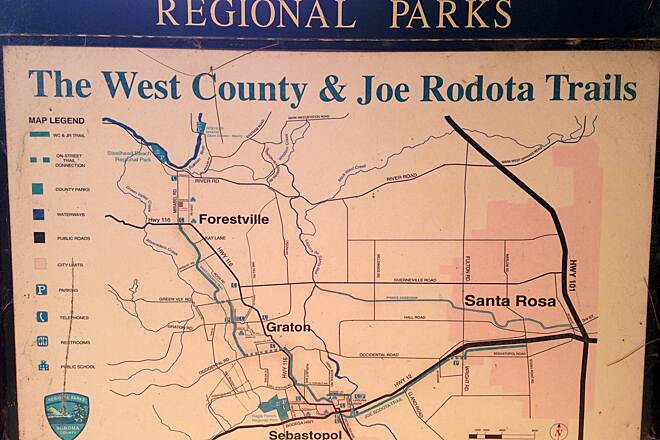 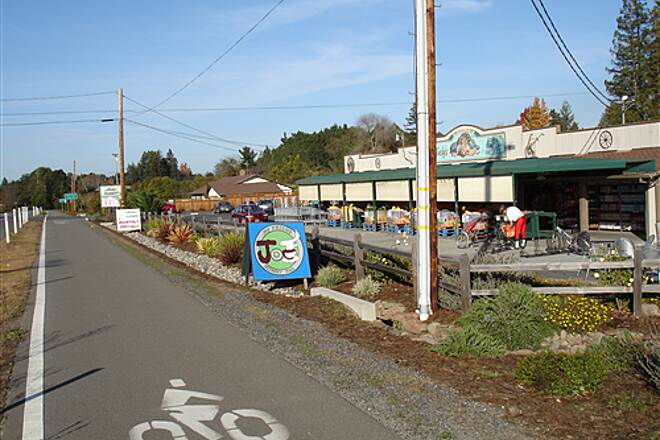 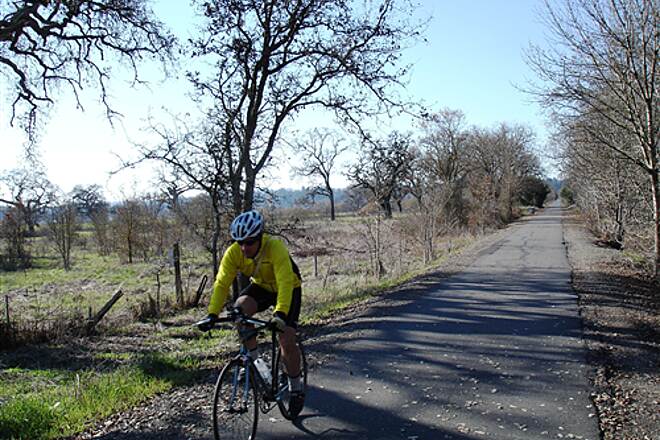 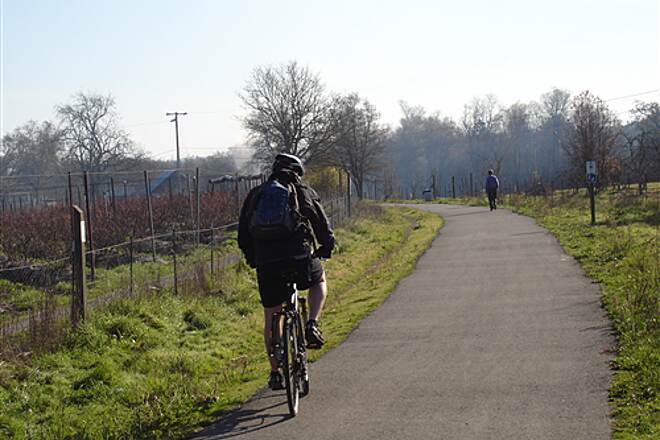 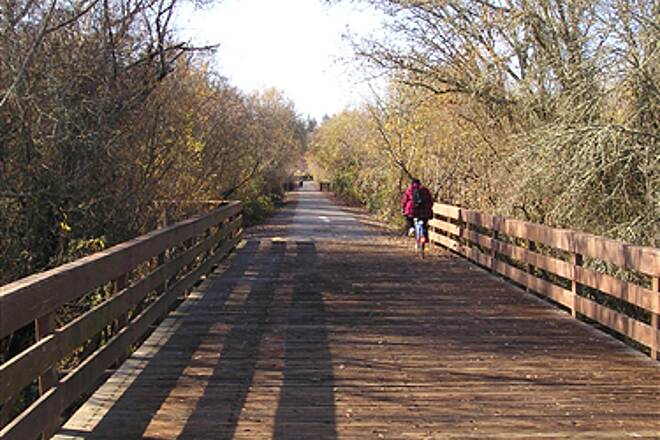 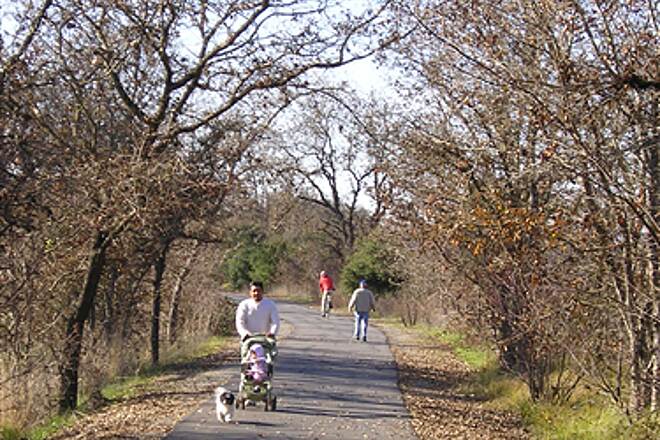 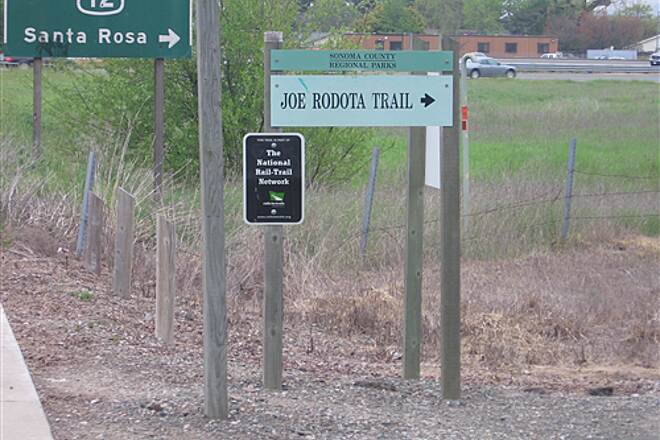 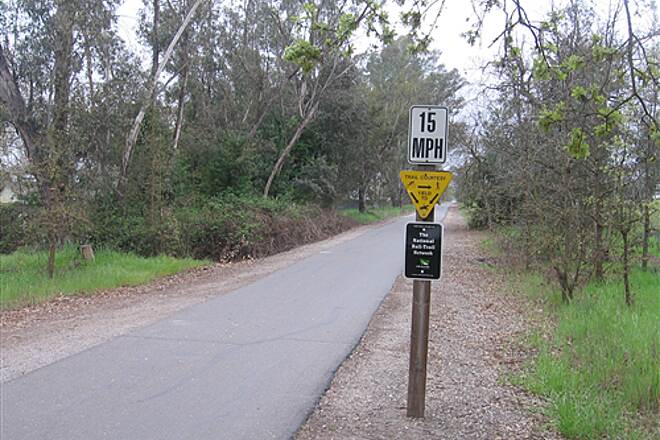 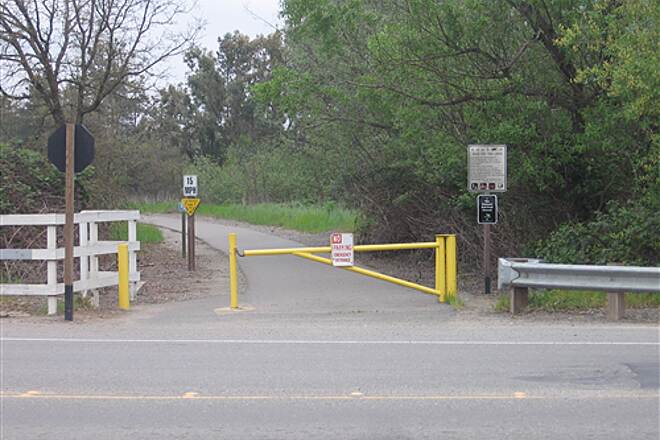 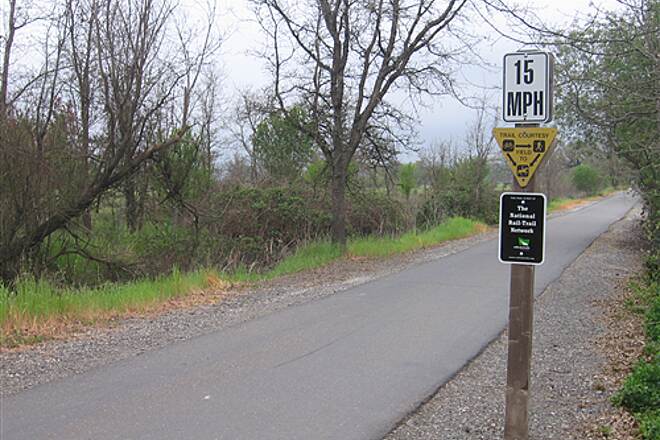 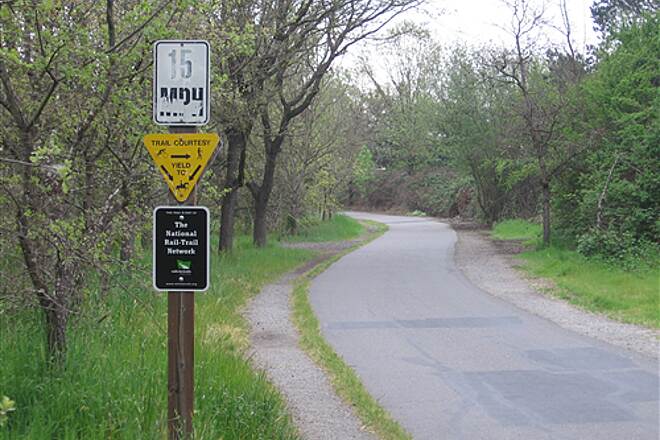 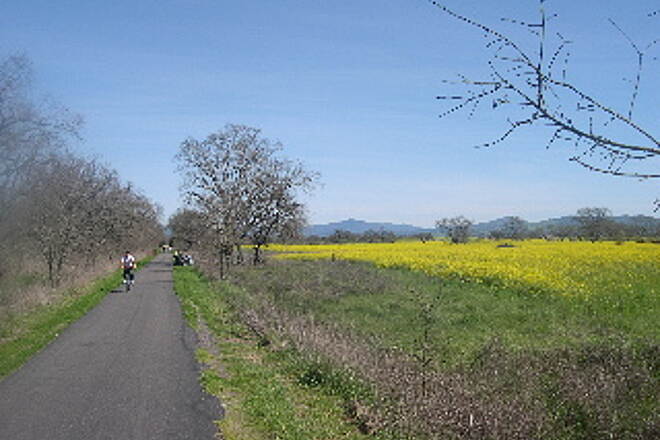 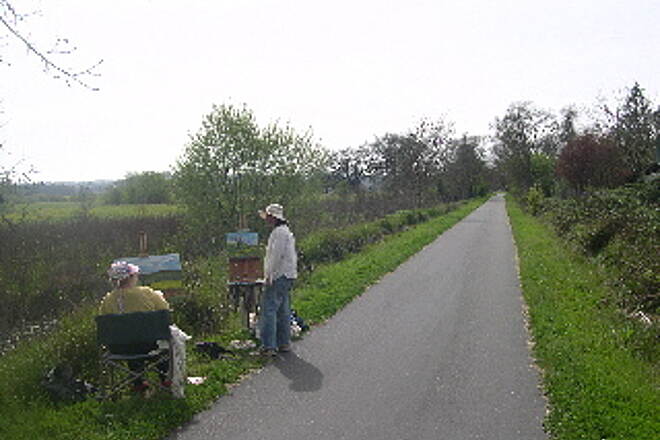 The West County Regional Trail is built along the corridor of the old Petaluma and Santa Rosa Railway, which carried passengers between Santa Rosa, Petaluma and Sebastopol until it was abandoned in 1984. Seamlessly linked with the Joe Rodota Trail in Sebastopol, the rail-trail system was designated as a Community Millennium Trail by then-First Lady Hillary Clinton and the White House Millennium Council, in partnership with the U.S. Department of Transportation and Rails-to-Trails Conservancy.

Both trails take in some of Sonoma County's most scenic and sweeping rural vistas. Beginning at a junction with the Joe Rodota Trail along Gravenstein Highway (State Route 116), the West County Regional Trail continues north along the highway past lush vineyards and farmland. (Take the Joe Rodota Trail southeast if you want to reach downtown Sebastopol or Santa Rosa instead.)

After 1 mile, trail users must turn left onto Occidental Road. Stay on Occidental Road for just under another 1 mile until you see the resumption of the off-road trail on your right. he section from Green Valley Road north for about half-mile is unpaved. It is an area that passes the wastewater treatment plant. That said, the rest of this last 4-mile section of the trail passes through beautiful vineyards, picturesque farmland and orchards. A special treat is the fresh aroma coming from apple mills you will pass on the industrial section of the trail in Graton.

The paved trail finally ends at Pajaro Lane in the small town of Forestville. A more rustic hiking trail continues north a short distance from this point to provide access to Forestville's commercial core on Front Street.

Parking for the West County Regional Trail can be found at a trailhead on Graton Road in Graton. From US 101 in Santa Rosa, take the State Route 12 exit toward Sebastopol. Once in Sebastopol, proceed onto Bodega Avenue, and then turn right on Main Street. At Healdsburg Avenue (SR 116), turn left. Follow the highway north to Graton, and turn left on Graton Road. The trailhead is located just past downtown Graton on the right (immediately adjacent to the trail).

We rode bikes on the trail from Forestville to Occidental Road. The trail is not completely flat but the hills were somewhat shallow and steady. From where we started on Pajaro Lane in Forestville we first went downhill a little while and then had an uphill climb for a fair distance followed by some fairly flat trail then a slight downhill. There is a section of the trail that is dirt and gravel along the way but it isn’t more than about 1/4 mile. The trail was shady in most places and the short sections on roads were reasonable.

just a heads up if you’re on a board

Do yourself a favor and skip the first half of this trail if you’re on a board. It’s pretty lame to begin with and the roads that you have to travel along are terrible. Part of the first half is also gravel and you’ll have to walk. But the second half is pretty awesome...especially the last 1/4. Go off the trail a bit and explore the back roads..there are some fun hills.

It's an alright trail. Starting at Hazel Drive for about 2 miles there a lot of homeless people and trash on the sides of the trail. After that, it's a very scenic and pleasant. It's pretty much flat the whole way. I ride this trail every morning and am satisfied with it.

We are easterners, accustomed to long off-road rail-trails that are really away from roads. We don't like road biking because it can be dangerous and noisy. Given the dearth of options in the area, we decided to try this trail. Even knowing what it's like, we might have done it once, but we won't be back.

After reading about the trail we decided to skip the Santa Rosa area and parked at the Sebastopol Rd/Wright Road parking lot. The parking area is tiny, around 6 cars. We arrived around 9am and it was full within 15 minutes. (Though it was empty when we returned around 2pm.) The trail is carved up into nice but short rail/trail sections divided by road sections. On the way out, we went around Sebastopol on roads which were low in traffic but very hilly. There were no directional signs telling us how to get to the next section of rail-trail. The West County Trail was much better at giving you directions, but it wasn't fun for us to ride so close to (or on the road) for much of the ride. The trail itself is not paved. On returning, we decided to stick to Main street in Sebastopol, but there was no bike lane and you could not ride on the sidewalk. Till then Google maps on my iPad was invaluable in helping us find our way, but the gps went crazy in town, so we went way out of the way before finding our way back.

Bottom line is "not recommended"!

We took this trail for Mother's Day on a beautiful spring day. It has all the elements one could want for a long bike ride. Lots of safe open space biking, town venues for food and fabulous scenery. Lots of place to start and stop for families with small children and for teens/older crowd, you can go as fast as you want. I highly recommend this trail for a day ride.

Everything grows in Sonoma County; grapes, apples, redwoods, oak trees, and palm trees. When visiting Sonoma county be sure to eat out at a restaurant serving locally grown produce and wines.
The western part of the trail between Santa Rosa and Sebastopol goes through grass land with some oak trees.
I road in April the day after a big rainstorm. Many of the grasslands and wooded areas are transformed into wetlands and swamps. If you have only done this trail in the dry season, try it the day after a rainstorm.
The traillink map does not show the recommended bypass for Sebastopol. The recommended route is north east of the town on Morris St and Eddie Lane. Pick up the Sonoma County Parks map online or from the visitor information center in Railroad square in Santa Rosa. Search the internet for "west county trail sonoma county" to find the map online.
North of Sebastopol, the trail follows highway 116 for a mile before returning to the historic railroad grade. The northern section has more wooded sections along with some vineyards, and abandoned apple orchard.
Good News! There is now public access at the northern trailhead into Forestville, via a new housing development on Pajaro Lane. To access the trail from Forestville, head south on Forestville St and turn right on Pajaro Lane.

This is my 2nd posting, but the 1st one was never listed, for some unknown reason! The trail ends in Forestville & goes off onto some nameless street. However, the path continues onto private property, which is now for rent, the American Wine Building, at 1st & Railroad streets. A few blocks away, is downtown Forestville, such as it is.

I was pleased to see this trail featured as the Trail of the Month for Nov. 2009 becasue I use the Joe Rodota Trail (the eastern half of the two trails) every day all the way from downtown Sebastopol to downtown Santa Rosa, where it connects to the Santa Rosa Creek Trail. While this portion of the trail is less scenic and relaxing than the segment from Sebastopol to Forestville, the 3 miles between Sebastopol and Wright Road aren't bad and I would probably have to drive if I couldn't take the trail. I'm often treated to great blue herons, little and great egrets, western bluebirds, a large flock of turkeys and quite a few other wild creatures. On calm, clear days, colorful hot air balloons frequently drift overhead, sometimes landing in one of the fields alongside the trail.

The whole ride takes about 35 minutes at a moderate pace and one can make a decent recreational loop by taking the Santa Rosa Creek Trail to Willowside Road (part gravel, but scheduled to be paved soon) and back to Sebastopol via Hall/Sanford, Occidental and High School roads.

Though the eastern, urban portion is a bit sketchy at night due to homeless camps nearby, I've never actually encountered any problems with the people that sometimes hang around that area. Always use a good light at night for safety because lighting is poor to nonexistent for much of the trail and the trail runs close to Hwy 12, so headlights can be a problem.

One of the main hazards is getting a flat due to glass on the trail (any time of the year) and goat head thorns (Aug.-Oct.). The latter are especially pernicious and can usually be found near the margins between Stony Point Rd. and Dutton Ave. Generally the best way to avoid them is to always stay on the pavement and stay alert to debris on the trail.

The Rodota Trail provides a good transit link for the area and is very popular with recreational riders and pedestrians. In Santa Rosa it connects with a very beautiful parallel paved trail that runs along the river thru the vineyards. You can use some of the local roads to make a nice loop. Worth going out of your way to ride.