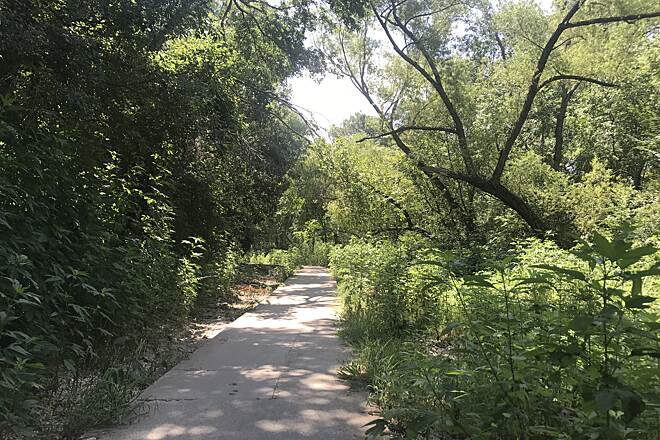 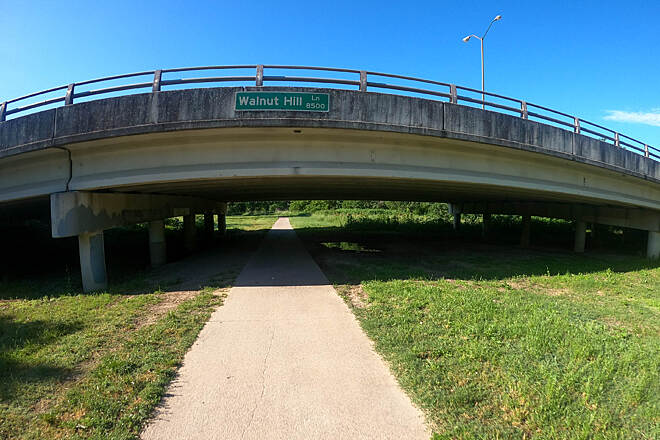 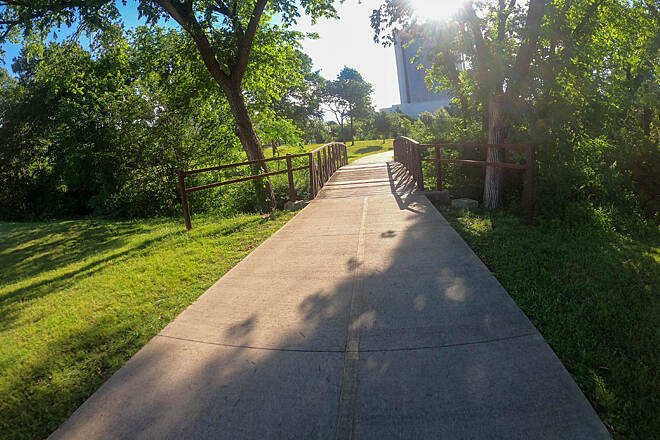 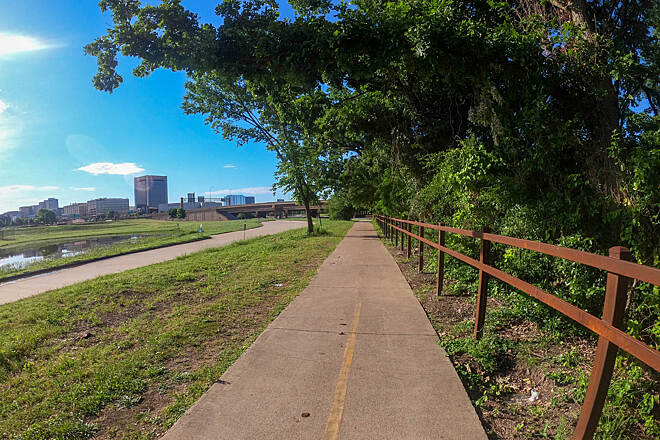 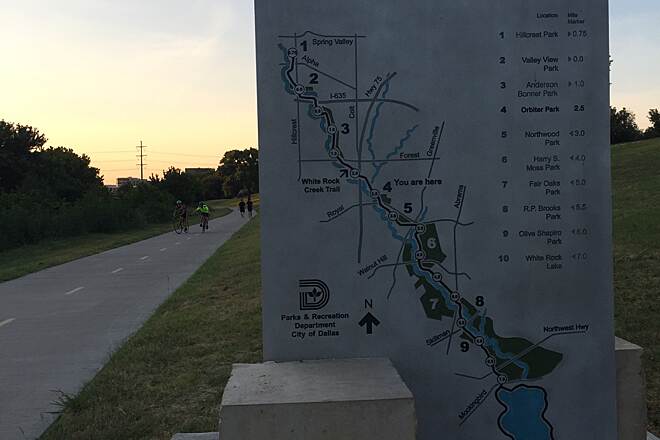 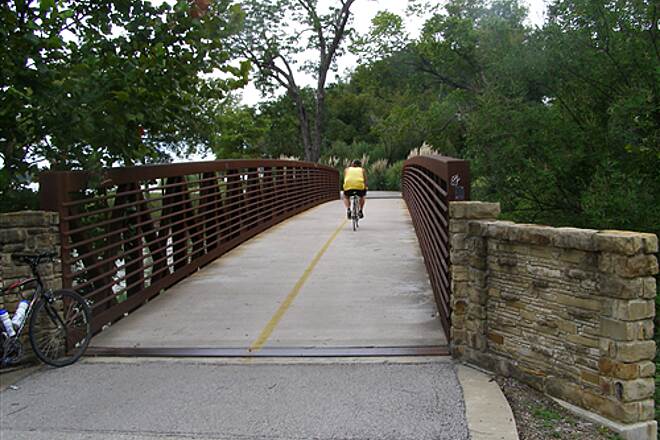 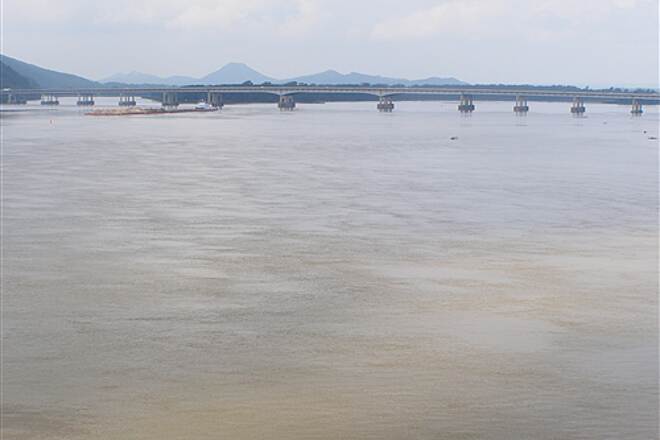 Valley View Park, off of Hillcrest Road and just north of I-635, offers plenty of parking at the northern end of the trail. There is also a parking lot south of I-635.

You can also find parking at Greenville and Royal, as well as off Merriman Road near Abrams.

I have biked this trail almost daily for two years. It is so littered in garbage, construction waste and wandering homeless that I now need to check the time I'm biking or go with someone. It's a scandal that what little bit of nature Dallas has bothered to preserve is utterly neglected.

This trail seems to be one the city has given up on. Between 635 and Greenville is ok but after Greenville down to Lawther is horrible, dirty too small for heavy traffic and simply not great for cycling. Unless Dallas decides to renovate this once great trail, You’d be better off going up Greenville to SoPac down to White Rock Lake

Great trail to connect to White Rock Lake. Wish they would have made a connection to SoPAc without having to go down to Flag Pole. The City should have someone come thru from time to time to clear out the debris from trees and mud and check for the cracks and uneven pavement especially now that they are connecting the Lake highland trail at the skillman end. Still its a nice trail with a those exceptions

This trail is a pretty solid trail, minus the initial mile or so that can become flooded during heavy rains. While I understand the minimal impact approach of the trail, small runoffs could be quite useful in order to maintain the integrity of the concrete. Overall a good trail.

When WRC floods, most of the northern trail is submerged at least 5-10 feet, leaving a LOT of flood debris and trash in the trees and bushes and a lot of dirt on the trails when the flood waters finally recede. The good thing about this trail is that it rarely parallels a street and there are very few street crossings so it's a pretty uninterrupted ride.

A great trail to bike with the kids. Starts at 635, and goes all the way to White Rock Lake. Fairly flat all the way, and not overly crowded. We also start on Northaven Trail, have to negotiate some streets to cross under 75, then on to the trail.

I've taken this trail twice now and I can't wait to go back. I love the fact that it's almost 10 miles and it links to WR Lake which is another 10 miles around it. In all I can get a 20 mile bike ride in and never have to get on the street!

The trail does have water problems just after a rain with high water over the trail. The trail is great for a nice shady ride without much traffic. Repair to the trail is good considering what high water can do to a trail in a very short time. Good undulating terrain with only a few controlled actual street crossings. The trail could use a few more markers at trail intersections to cut down confusion. For a trike rider I thought it was a very good ride experience just a little ruff in places.

not a bad ride

I ride this trail pretty often. altho the trail passes thru some isolated areas I've never seen vagrants and it seems safe. plus it's pretty well populated during the day with other bikers. I enjoy the trail( it winds and turns ,.. not just straight so much ...and like that it adds some miles to the white rock lake trail.

Great for runners and recreational and commuting bikers

If you like to bike or run and need to rack up miles, the White Rock Creek Trail will suit your purposes. It's mostly flat; the only real exceptions are where the trail passes underneath the DART Red Line near Forest Lane and U.S. 75/Central Expressway. There aren't as many water stops as you'll find at White Rock Lake; I count five from trail head to trail head, about 1.5-2 miles apart. (There's one off the path as well in the park at Royal and Greenville.)

Lighting is limited in many places, as is signage, so don't run or ride after dark without a light. There's also more criminal activity in the dark, as you might expect, so be cautious.

Some of the bridges with wooden slats could use more repairs, but the city recently put in some work. Now that the trail connects to the Cottonwood Trail, you can access Forest Lane Station as well as White Rock Station if you want to park at DART, where your car will be safer.

Not a review, questions...

As a new bike rider (one speed Schwinn) riding about 10 miles around my neighborhood each morning, I am wondering if the White Rock Creek Trail will be too much for me. Is it very hilly? I guess I could turn around at any point, but if it is just one hill after another, I would like to save myself a drive from Carrollton. Can anyone help?
Thanks, Boddie.

Avoid the Crowds and see some nature on WRC Trail

After a near-death experience on Katy Trail (I am NOT kidding) I decided to avoid that kind of congestion and the proliferation of headphone-wearing joggers, and stick to the road less traveled. This trail affords over 20 miles round trip; from it's northern parking lot, south around White Rock Lake, and back. It's far from crowded, and has the additional side trip of the almost-open (April 2011) Cottonwood Creek Trail, which joins this trail south of Forest, just north of the DART bridge. Cottonwood has the added distinction of riding under the High Five (!) and offers a great way to clock some extra miles if you want them.

While the amenities on WRC don't compare to the lush Katy, neither do the crowds. And it's roughly four times longer. You can hum along at 20 mph for mile after mile. White Rock Lake, which can attract crowds, is always a visual treat and well maintained.

A codicil: Summer of 2011 they are rebuilding the surface of this trail between Forest and Greenville. It won't be shut down, but it will have a blacktop temporary trail on the side while they widen and rebuild the concrete one. This is in the general area of the connection to Cottonwood.

I think of downtown trails like Katy as short & high density, and these Northern routes as long open spaces. You'll find plenty of creek views and no hills to speak of, while ducking under an occasional overpass to remind you that you are, indeed, still in the city. It's a fun way to rack up some miles.

I'm concerned about the parking lot problem with break-ins. I park on the street, on Vanguard Way. It has a trail head and parking spots in that development. Vanguard Way is located between Royal and Forest, near Orbiter Park.

I was at the small satellite parking lot at the Valley View Park entrance on Monday, April 11, 2010 when my car, and another vehicle was broken into. When the police arrived we were informed that on a daily basis this occurs there. They break your front window, climb in through the window, and steal electronics and valuables. This left an unsafe taste in my mouth given the officer's excuse for not finding the criminals was that, "tax payers dollars are not equipped to provided 24/7 police presence over crimes of opportunities." Needless to say we were also informed by passer by's that there had been 17 break in that week alone. BE CAREFUL where you park there. They refuse to allow signs to be posted warning patrons of this situation, and so I came to TrailLink hoping to get the word out. BE SAFE! This happened at 10:30-11am in the morning BROAD DAYLIGHT! They are brazen thieves!!

I bike/ run Katy Trail frequently but decided to try this trail to the lake since it is closer to were I live. I still haven't decided if I will go back. Alot of the area was unkept and messy and I felt somewhat unsafe since most of the area is off the beaten path and under major roads, and was surprised that in the 4 hrs I was on the path I never saw a policeman considering I see 3 at Katy Trail everyday and that trail seems the safest to me. I was also aggravated that there were no way warding signs for the other connecting trails or the area you are in. Most of the time I had no idea where I was until i ran upon a road and had to look for the name. The shortage of shaded benches was also a let down. I was slowly crashing and need a quick rest and every bench I saw was in the middle of nowhere, there would be a nice canopy or large shade tree and the bench would be as far away from it as possible directly in the sun. I ended up sitting under a bridge to rest from the heat like some homeless person. I did enjoy the trail I was just disappointed at it since I'm used to Katy Trail but then again I am comparing a trail listed on the NY times as one of the best trails in the country to a city owned and operated park so please forgive me if I sound like I'm bashing the trail. For what it's worth the trail is great but for what i'm used to it was horrible.

Some shade in Dallas!

Trail has some shade which at a premium this time of year. Not all of it is shaded but it's better than being totally exposed.

Only 1 major street (NW Hwy) to be crossed and 2 minor streets. The crossings were easy.

Some areas aren't well manicured but overall it was fine and I will definitely ride this trail again on the way to White Rock Lake.

This was an unusual trail. My wife and I rode from the park on the northern end of the trail all the way to and around the lake on the southern end. The trail, prior to reaching the lake is not special. There were scenic places and places that were a bit littered and unkempt.

However, once you reach the lake and the surrounding park you are greated with an ocular treat. The area has many beautiiful mansions, boats on the lake and a well kept, clean park. We took many photos of this area and I will attempt later to post a few for all to see. If I were to rate the two separate sections of the trail, the creek part would be a 2 1/2 and the lake part a 5.