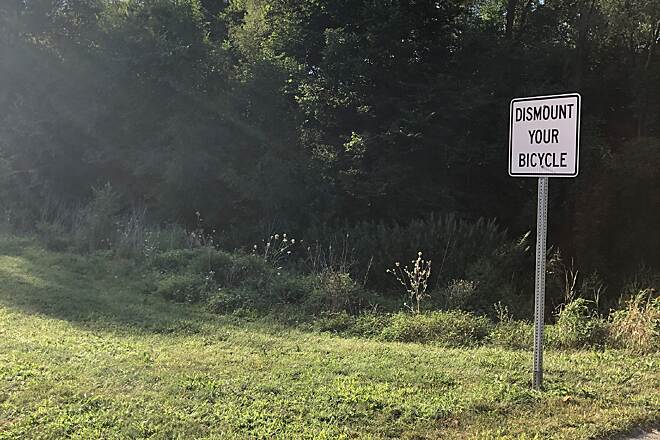 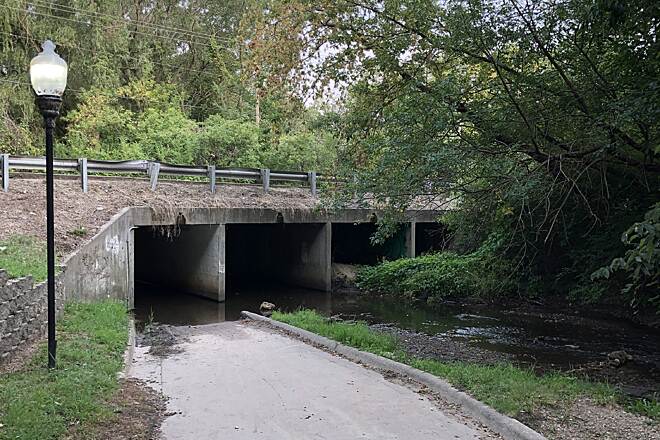 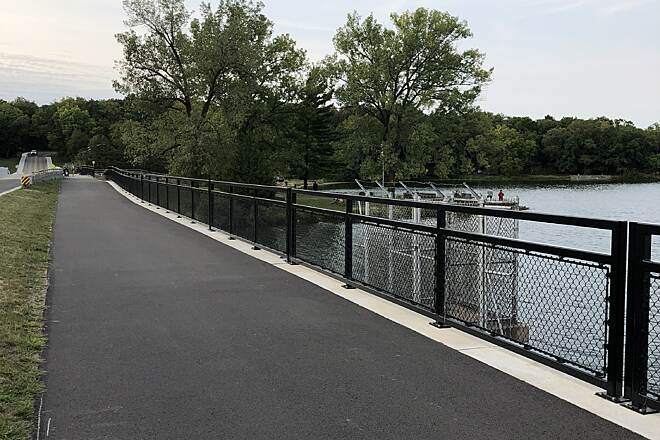 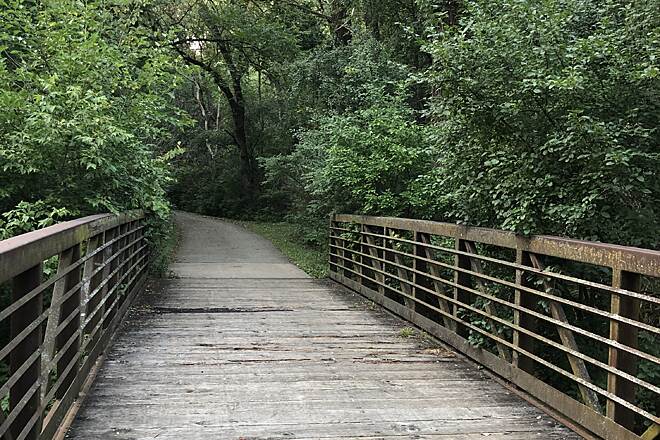 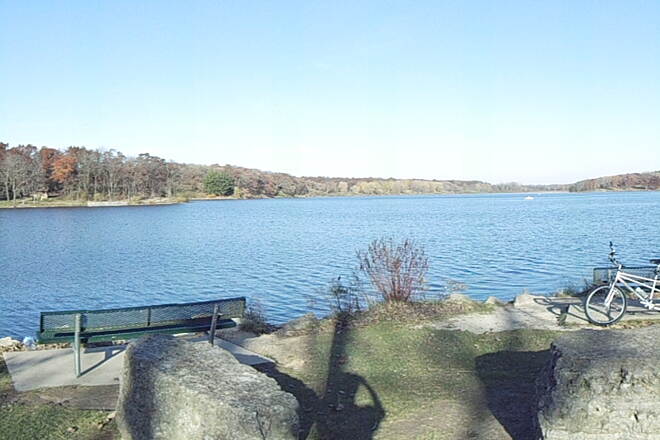 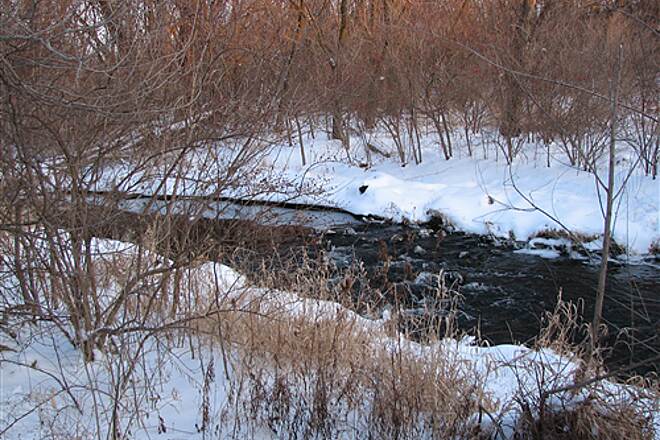 View Trail Map Send to App
The Willow Creek Path is a pleasant, tree-lined trail that follows its namesake creek for most of its journey through the communities of Machesney Park and Loves Park in the Rockford metropolitan area. It extends from Harlem High School into Rock Cut State Park, one of the most-visited state parks in Illinois. As you enter the park, you can also connect with the Perryville Path, which travels about 6 miles south through residential and commercial areas.

The pathway runs adjacent to the Dennis Johnson Memorial Park as well, which offers volleyball, tennis and basketball courts.

The eastern trail endpoint is located in Rock Cut State Park (7318 Harlem Road) at the Lake View Trailhead and picnic area on the west side of Pierce Lake. Note that the park closes at 10 p.m. during the spring and summer and 5 p.m. during the winter. Visit the park's website for details.

great for a hot day

This path is well maintained and it is mostly shaded making it easier for sunny days.

I've only ridden on this path a couple of times, but I love it. I'd give it 5 stars if the Forest Hills Road underpass wasn't constantly flooded. Crossing the road isn't usually a hassle, but occasionally requires a little wait. There's a ton of shade and it's very well maintained. A few more bugs here than other local paths, but that comes with riding along a creek in the trees. I haven't gone all the way to Pierce Lake yet simply because my kids wanted to get off the path onto some dirt trails inside of Rock Cut State Park. The connection to the Perryville Path is pretty easy.

It's a great paved path. It's mostly flat, but has a few hills (mainly near Perryville Road and after you enter Rock Cut). The majority of the path is asphalt, but there is a section of concrete path near the Perryville Road bridge. The underpass at Forest Hills Road is generally unusable during the warm months. If it isn't flooded, it's full of creek mud.

If you start at Harlem HS, you should expect two roadway crossings. The first is a short distance past the HS and the second is at Forest Hills Road.

There aren't a lot of people on the path if you go early on a weekday. I usually only run into a small number of other runners and spandex-clad bikers.

The weekends see an increased number of weekend warriors and dog walkers, but you still feel like you have a majority of the path to yourself!

Watch out for and use caution near the side dirt trails. I've seen mountain bikes come flying off of these onto the paved trail.

Fran dropped us off at Rock Cut State Park and we walked home. I took some video along the path.

I took a closer look inside Dennis Johnson park along the way this time for facilities. I saw a drinking fountain by the playground equipment. No toilet facilities that I noticed.

There are lights all along this path between Harlem High School and Perryville Road. Most of the lights were on except the segment right near Perryville Road. Might be that it was not dark enough yet. There are benches and trash cans periodically along the whole length of the path. The underpass at Forest Hills Road was flooded again. It was flooded the last two times we came by as well.

NOTE: I observed a bumper crop of poison ivy all along the path inside Rock Cut State Park. Not so much west of Perryville Road.

It's a nice walk. Wilma liked the creek. The asphalt surface was in good repair.

It extends from Harlem High School to the dam at Rock Cut State Park along Willow Creek. Mostly we just do some or all of the trail that is inside the park, but once we made the trek from the dam all the way to the school, and then home. I think outside of the park it is maintained by Harlem Township since it is mostly in a Harlem Township park. We have been on short segments inside the park many times.

It runs along Willow Creek the whole way and is only rarely more than 100 feet from the creek. There is plenty of access to the creek for Wilma to go play or get a drink. It is mostly shaded as the description mentions. There is a side path that you can take down to the bottom of the dam. Probably too steep for bikes though.

I linked to a couple of our more interesting walks on this trail that have some pictures. Most of the pictures seem to feature a beagle in the creek. She likes creeks and there are lots of places she can get to it along this path.

We went from the dam to Forest Hills road on this occassion.
http://ilbob.blogspot.com/2010/08/dog-walk-aar.html

This time we went the whole way from the dam to the school, and then walked home from the school.
http://ilbob.blogspot.com/2010/09/4-mile-hike-with-creek-beagle.html

The path gets a fair amount of use. Most of the time we have been on it there are plenty of joggers, walkers, and bikers on it. It is kind of the main drag between several trail systems within the park and the Perryville Path along the west edge of the park.

There are a few benches and trash cans along the way, but that is about it in the way of facilities, at least at Rock Cut. There are toilet facilities and water available inside the park, but nothing real close to this path. The closest water and toilet facility is about 200 yards south of the dam along the park road. The toilets are pit toilets and are open year round. They shut the water off once it gets cold. I do not recall if there is water and/or toilets at Johnson Park or not. There may be. I only went that way the one time and it was a while ago. I am pretty sure there is nothing but maybe a trash can and/or a bench on the segment between Perryville and Forest Hills Road.

There are no lights on the trail inside Rock Cut State Park, but I think there are at least some to the west. There may be lights that go all the way to Harlem High School, but we were on it during the day, so I don't recall for sure. I don't even know if the lights are turned on, since it was not dark when we went that way.

There is an underpass at Perryville Road as you head west out of Rock Cut State Park that makes it easy to get past this busy road. There is also an underpass at Forest Hills Road but it was flooded at least once when we were there, so we had to walk across the road. It is only a moderately busy road though.

One time when we were on this path a Loves Park PD car snuck up on us from behind. I have also seen a fair number of ducks on the creek.

Plenty of parking at the park by the dam and at the school. Just don't get locked in at the park, as they close promptly at 5pm during from November thru March. I don't recall if the school has gates they lock or not. I don't think so.