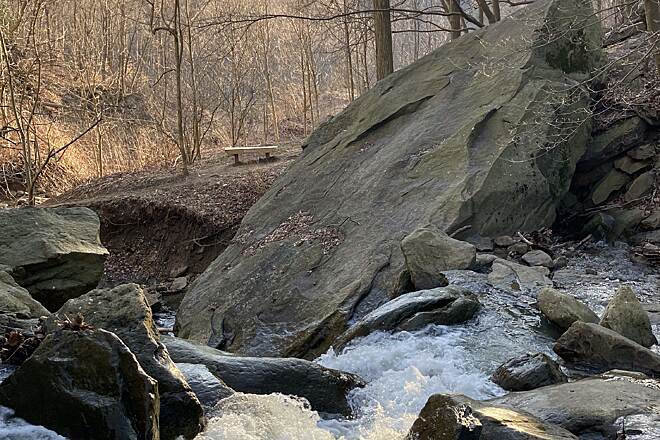 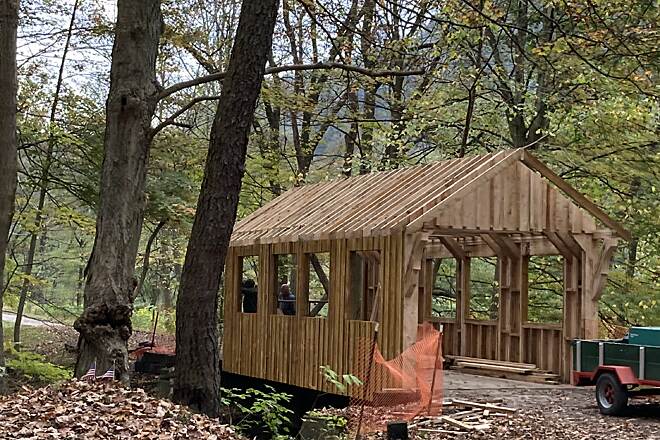 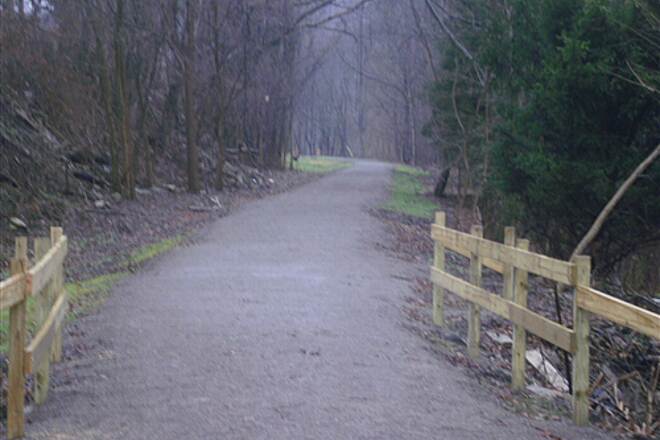 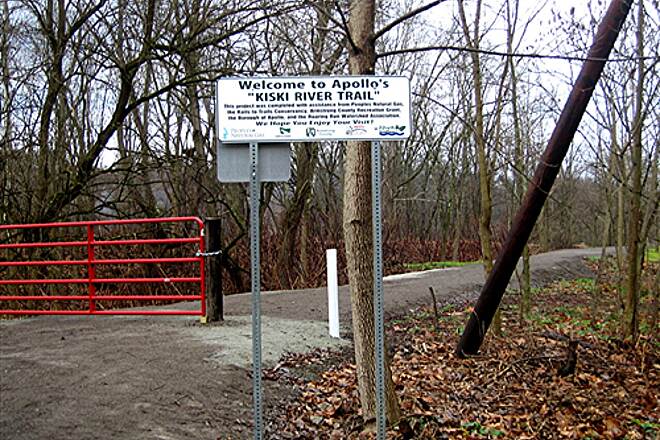 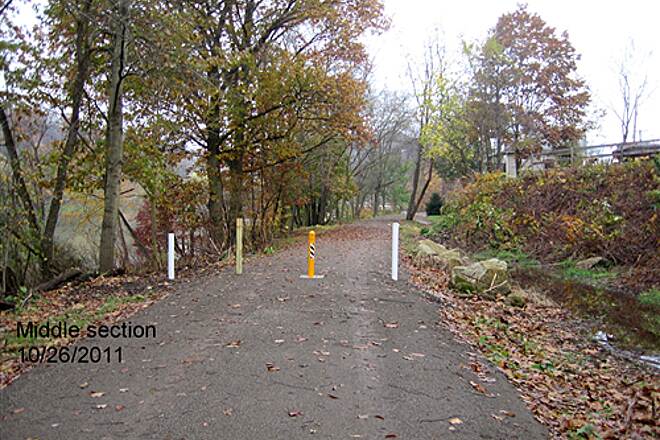 Apollo's Kiski Riverfront Trail, built on the former M-Line Railroad bed, begins in downtown Apollo and follows the scenic Kiskiminetas River (called "Kiski" locally) to North Apollo. The nearly level trail is surfaced with fine crushed limestone and stops just short of the popular Roaring Run Recreation Area. An on-road connection can be made to the 5-mile Roaring Run Trail by continuing south another 200 yards on Kiski Avenue, then three-tenths of a mile on Canal Road to the trailhead.

Metered parking is available at the North Plaza Shopping Center in downtown Apollo, at the intersection of First Street (Route 56 East) and Warren Ave (Route 66 North).

A large parking lot is also available at the end of Canal Road in the Roaring Run Recreation Area, however, note that you would need to travel on roads a short distance to get to Apollo's Kiski Riverfront Trail from this lot.

Easy to find. Started in Apollo and headed toward Roaring run trail. Short time on road to get to trail, but road not very busy so we had no trouble with traffic .

Easy to find. Started in Apollo and headed toward Roaring run trail. Short time on road to get to trail, but road not very busy so we had no trouble with traffic .

Not to complain, but I sure wish this trail could have been extended just a little bit further east, AND a little bit further west. This fairly new "connector" trail was built on the ex-PRR right-of-way of what lastly was the McLaughlin Line Railroad, a short little industrial railroad which served the Metal Service Plant, located not very far west of the west end of the trail. The little 0.2 mile leg west of 66/56 doesn't serve much purpose, considering the dangerous, even though signaled, trail crossing of PA-56/66. A cop yelled at me once for doing something "wrong" ? heading west, and even though cleared, I almost got hit by cars turning in this nasty intersection coming back! Now the GOOD news: There is a new multi-car dedicated trail parking lot on the east side of that nasty 56/66 junction at the north end of the Kiski River Bridge. Use it, and don't even bother crossing that intersection! But this is truly a nice little connector, surely giving Apollonians a nice start heading east for the Roaring Run Trail, or simply a nice little walk or ride down along the river. First railroad note - That single-armed, fully insulatorized telegraph pole at the east end of the parking lot... It's the only one on the dual trail. Then it's a nice, short little run on the old railroad / former canal bed (I'm enthused!) behind the houses right along the riverfront. 0.6 miles east of the parking lot, you will note a gently curving grassy right-of-way, marked "Private Property", turning south. This was the former connector track and bridge over to former PRR "AP" Tower (derailed into pieces by a train in 1949), and the junction with Norfolk Southern's ex-Pennsy Conemaugh Division main line (CP-Apollo today). That junction was railroad Milepost 0 for the trackage/trails east of that connector track. A rusty old dead ex-PRR position light signal guards the ghost Metal Service trains off the Kiski Riverfront to the west, and the PRR coal trains from the Roaring Run's coal mines east of here, off what was this orphaned bi-directional branch along the north side of the river. The Kiski Riverfront Trail ends abruptly here, and dumps you out on a little-used, (but still a little scary) single-lane, hilly little 0.6 mile on-road ride to the trail head parking lots of the Roaring Run Trail to the east. -Rich Ballash, Latrobe PA 7-12-2014

I can finally ride my bike more safely from Apollo to the Roaring Runn Trail!

After many years of hard work, the Roaring Run Watershed Association (RRWA) has completed the trail link from downtown Apollo to near the Roaring Run Trail! The Borough of Apollo partnered with the RRWA to make this trail a reality. Although you still have a short ride along Kiski Avenue, then onto Canal Road, this route is way safer than riding 0.5 miles along narrow Kiski Avenue from town. The trail offers nice views of the Kiskiminetas River and provides a nice place for the residents of Apollo to get a little fresh air and exercise. As a resident of Apollo I am thrilled with this project's completion and am so looking forward to using the trail, hopefully on a daily basis! Thanks RRWA and Apollo Borough!