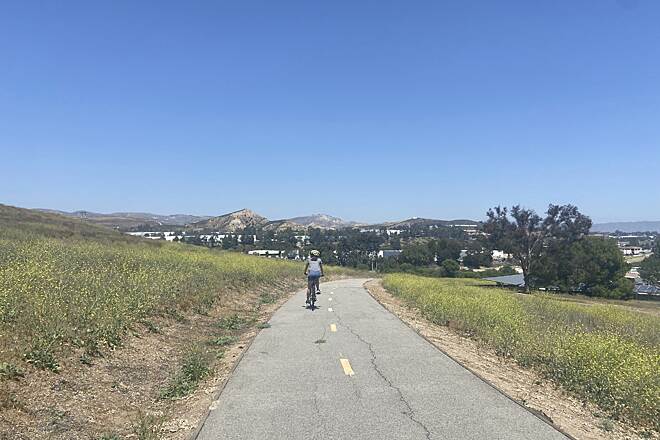 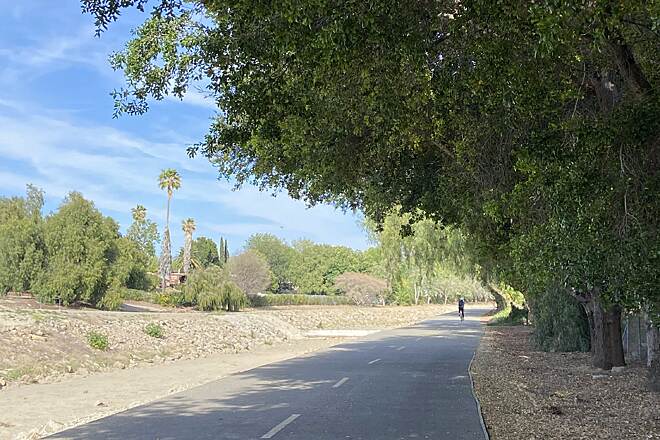 Providing a crucial off-road route in Simi Valley, the Arroyo Simi Bike Path (also known as the Arroyo Simi Greenway) is a flat and well-paved trail that provides a great route for commuting and recreation. The trail begins at Tierra Rejada Road on the west side of Simi Valley. The start of the trail is unpaved, but the rest is asphalt marked with two lanes.

The trail chiefly follows the route of the Arroyo Simi, a small waterway that flows through the valley, and passes by numerous residential areas and stores. Although the trail runs through urban areas and along rail corridors, parts of the trail have lovely views of the surrounding mountains in the distance. From Madera Road to E. Los Angeles Avenue and from 1st Street to Sequoia Avenue, the trail splits and travels along both sides of the arroyo. Everywhere else, the trail only goes along the north side.

The trail on the south side passes by Rancho Simi Community Park, which features a duck pond and contains parking and restrooms. Just west of the Simi Valley train station, the trail splits, with one branch following a dry creek bed to Cochran Street. The other branch continues along Arroyo Simi past the train station, ending at Yosemite Avenue.

We started at the Simi Valley Metrolink. Parking on a Saturday was easy and plentiful. If it's a hot day, park in the shade. The path itself is nice. A bit rougher at the beginning, but when you hop over to the improved side, much, much nicer (that's at Vista Del Arroyo Park. Which has bathrooms and water BTW.)

The work they're doing to the river is looks great. If you're travelling from the Metrolink, you've got a few miles of river that's being worked on. It gets nicer as you go. We ended up at Stargaze Park, which is an open green space, great for a snack, but a little sparse on the shade. On the ride back, we decided to go past the Metrolink, but will skip it next time. At that point the river looks terrible (just concrete and trash) and the path is dirty. It really only adds an extra mile or so.

I ride my electric scooter on this trail and I love it. The distance is perfect for me. I ride from Madera to Erringer, stop at the park, and ride back. Very enjoyable. I recommend it ¿¿¿¿

Thoroughly enjoyable ride with plenty of wildlife, running water, great trail, would do again and again