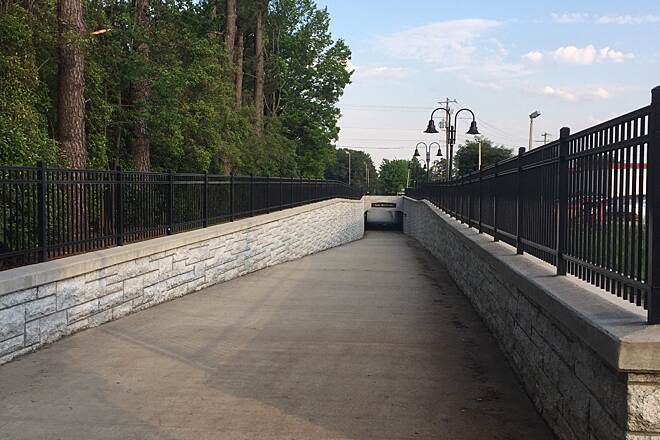 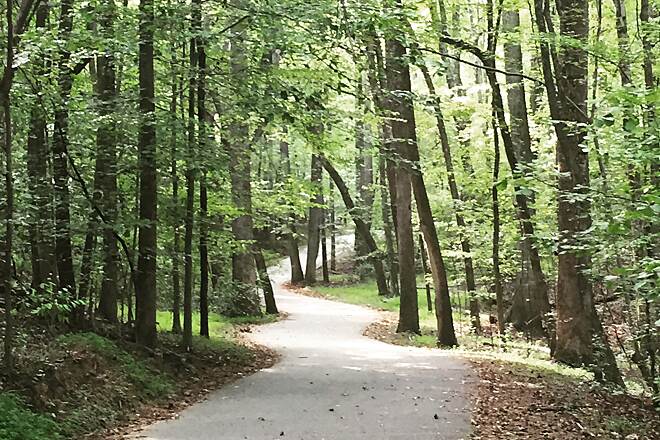 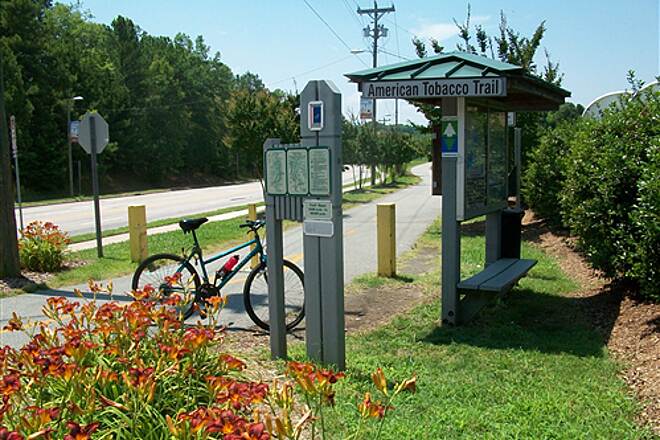 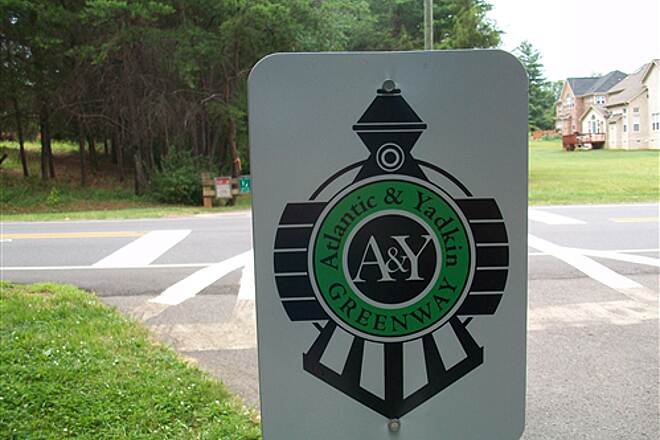 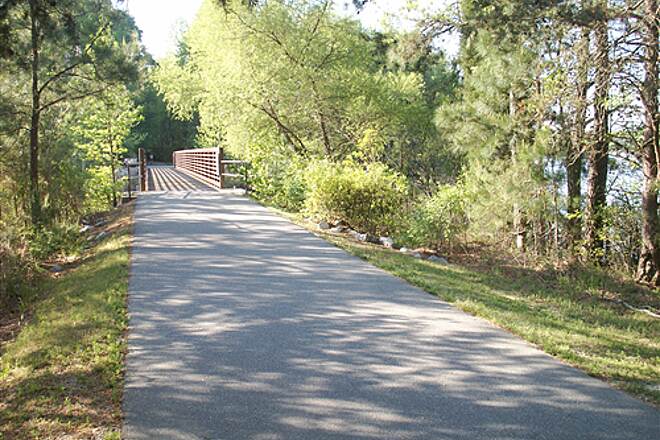 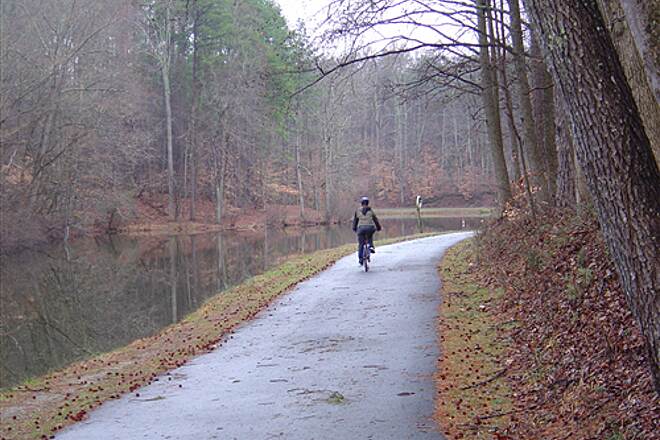 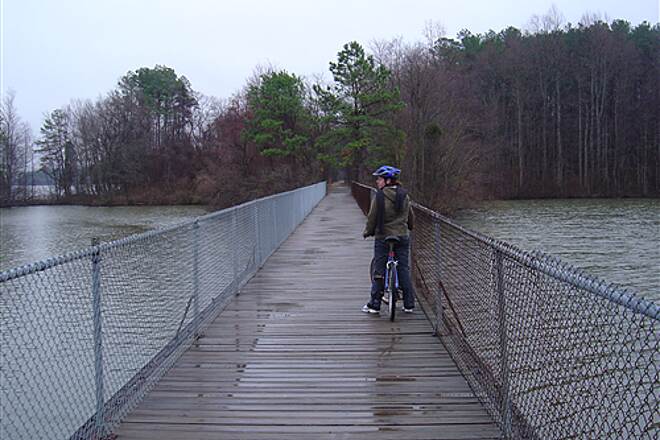 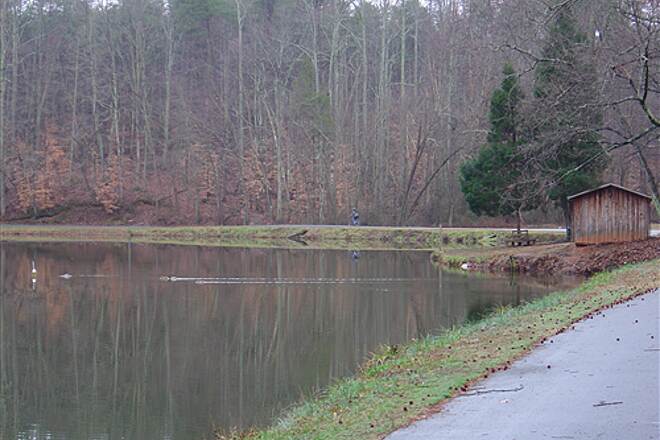 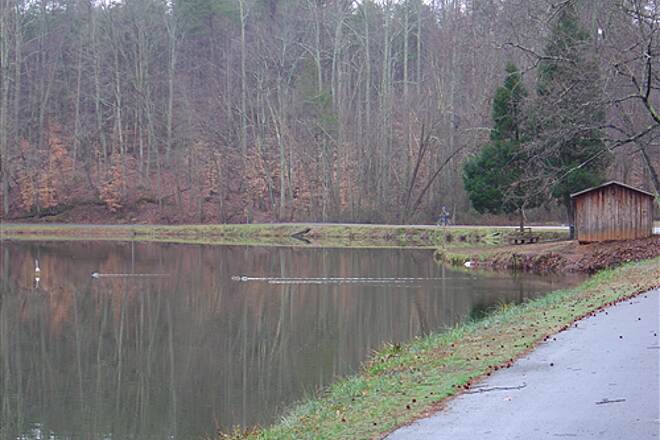 Stretching from north of Lake Brandt south to Greensboro Country Park and beyond, the newly named Yadkin & Atlantic Greenway is really a combination of three greenway segments, now made into one: the Lake Brandt and Bicentennial greenways and the Battleground Rail-Trail.

The rail-trail occupies the abandoned bed of the Atlantic-Yadkin Railroad, which operated between 1899 and 1950. Some of the line was part of the Cape Fear and Yadkin Valley Railway and ran from Wilmington, NC, to Mount Airy, transporting granite and, on occasion, visitors to the Guilford Courthouse National Military Park.

Today, the Atlantic & Yadkin Greenway rail-trail links neighborhoods, businesses and parklands. Beginning in the Lake Brandt area, Greensboro's oldest and second-largest reservoir, you'll experience beautiful lake views as you wind along the rail-trail though a mixed pine and hardwood forest alive with native wildflowers and wildlife.

Pause on any of several bridges, particularly the 140-foot H. Michael Weaver Bridge, to spot such common and migratory birds as bald eagles, blue herons, egrets and ospreys. Signs mark possible side trips on the Owl's Roost, Palmetto, and Nat Greene trails.

From the intersection of Old Battleground and Lake Brandt roads, the rail-trail runs through a residential neighborhood then crosses through Guilford Courthouse National Military Park before skirting the western border of the adjacent Greensboro Country Park.

At Pisgah Church Road, the Atlantic & Yadkin Greenway carries on through what was once called the Battleground Rail-Trail. It runs parallel to Battleground Avenue (east side) to its terminus at Markland Drive.

Some of the rail-trail sections take slight jogs down city sidewalks. Just follow the A&Y logo (the front view of an old steam engine) to keep to the trail.

The greenway is part of North Carolina's Mountains-to-Sea Trail, an 1100-mile network of trails and roads  connecting the Greater Smoky Mountains to the Outer Banks.

There are numerous access points and places to park, including at Bur-Mil Park, Guilford Courthouse National Military Park and Greensboro Country Park. For more information, visit the Atlantic & Yadkin Greenway website and click on the map links.

The bumps are being worked on. Thankfully we chose to use our gravel bikes. Beautiful waterside sectionsDon't skip the National Military Park.

The bumps are being worked on. Thankfully we chose to use our gravel bikes. Beautiful waterside sectionsDon't skip the National Military Park.

be careful of traffic and dog poop

Overall great trail . But trail is cut in between three busy intersections with plenty of cars so you have to be really careful . Also beware of dog poop among the trail. Some dog owners aren’t cleaning up after themselves .

Too rough for cycling

My husband and I love rails to trails cycling. The path here is so rough where roots have grown through and busted the pavement it’s almost impossible to ride in places. We’ll not be going back.

Really great trail, we pulled the Burley on our bikes with our two year old. There are a couple play parks to stop at along the way, plus we ended up at the science center where there were paddle boats, playgrounds, lots of fun for kids. My app said I went about 12 miles, it was all fairly shaded and the lake was beautiful. Highly recommend for hiking with children.

Good for some miles

I've ran this trail several times while in the area. Dont know why I haven't written a review. 4.5 is a more fair rating. This is a very nice, paved and rather shaded trail. The lake and wildlife give some beautiful scenery while running or biking.
A couple small hills give an occasional challenge.
So as I always say, if in the area and want to get a couple miles in, head here. You'll enjoy your time.

Rode this trail on a weekday and the traffic was minimal. Worth the drive and don’t miss the sticky buns at Todd mercantile store along with banjo music from

We really enjoyed this path. We parked at Country Park and took the path North till the end near Strawberry Rd. We then retuned to our starting point and biked the portion that ends near Freddy's. Beautiful scenery on the well kept and very popular path.

Very nice trail! My wife and I had a very nice time! We are definitely going back again!

I rode this trail from the southern end to about 4 miles north. Instead, I would park at the lot posted on the website, then ride to the north. This is a wide, paved, well-maintained, beautiful trail that has alot to see along the way. The best part of my ride was crossing the bridge over the pond. It is an easy ride that I wish I had had time to ride to the northern end.

This is a great ride!!!!
The trail is paved, and clearly marked.
I spotted a turtle laying eggs, saw various birds,& lots of pretty wild flowers.
I don't recommend parking in the Strawberry rd lot. Two cars got broken into.
Park at the Guilford Courthouse Military Park.
Lorraine June 12 2010

Great Ride.. I rode this route today and it was great... somewhat crowded but a beautiful day and great ride... Rode from South end Pisgah to Battleground and back.. took in the lake loop and parking lots for 10m... Great workout with just the right mix of hills...

Gorgeous: this trail follows lake shore a lot. Runs right in front of the Guilford Courthouse Battlefield and finally connects to Country Park on Pisgah. Pretty level, going from 150m at Strawberry parking to 250m at Country Park. Shaded and in woods 80% of the time. Great early morning riding; tends to get busy late morning and most nice evenings, especially around the Battlefield.

"This is the best bike trail. It has some hills,lots of nature , a stream that runs along side,and it is paved. You ride over wooden and concrete bridges that go over the water. You go under a four lane road which looks like a tunnel. Kids love this one. You can get off your bike and walk down to the stream and sit on the rocks at the waters edge. There are a few benches and picnic tables along the way.On my trips I have seen many birds and a few turtles. The parking lot is not very big so if you go on the weekend you may have to park in the Bank of America office parking lot or in the grass at the trails entrance. "

Great trail to get your heart beat up or just cruise through the countryside. If you start from the Strawberry rd side the first mile is gravel/dirt with the rest of the ride on pavement with the exception for a small strip through the Greensboro National Historic Battlefield site where we claimed our independence from those nasty redcoats and well worth a weekend visit for all the history buff/bikers/hikers in our ranks. Enjoy our national treasure and check back for updates because our rail trail is getting an extention soon and may well be linking 3 or more cities in the near future.

"This is a very clean, mostly paved trail. A great mountain bike spur off the main trail can be found from Strawberry Hill Road to Bur-Mil Park. Access can also be had to the county park mountain bike trail (equally exciting)."