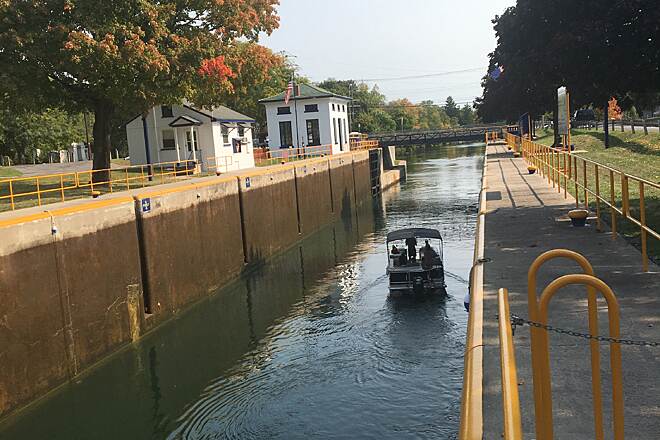 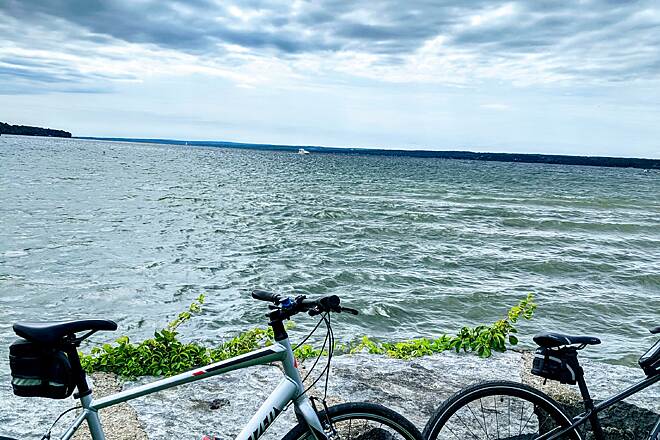 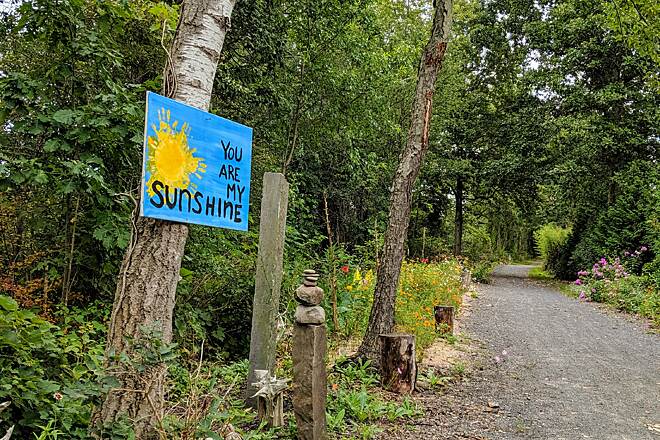 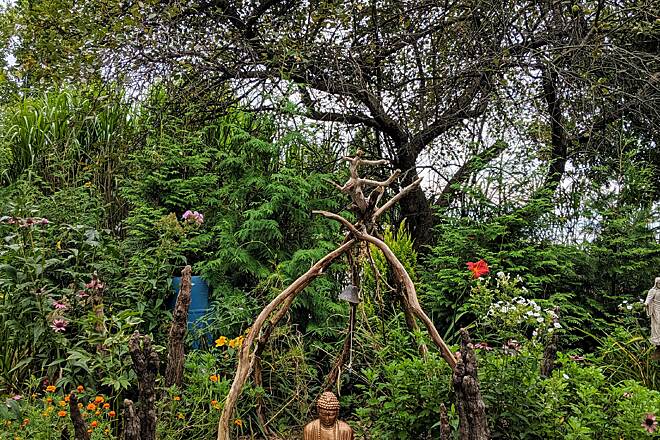 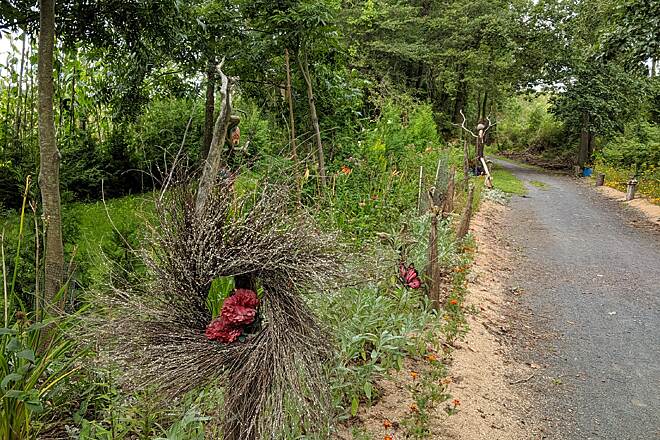 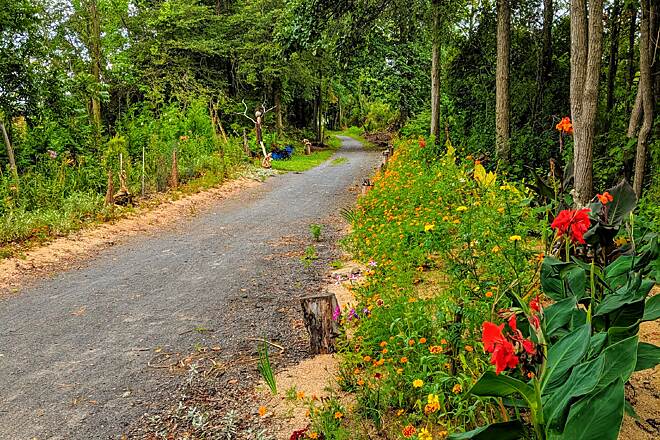 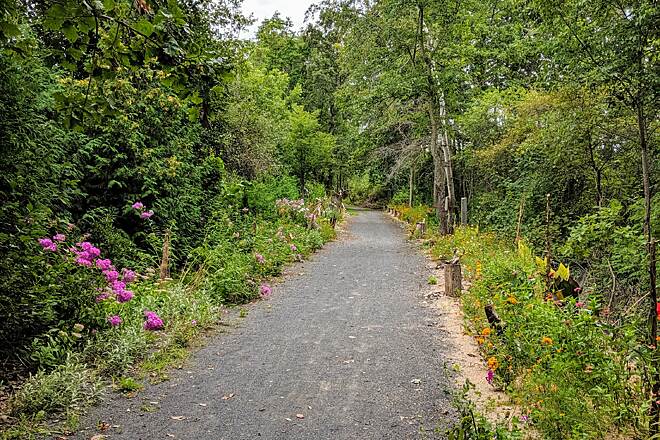 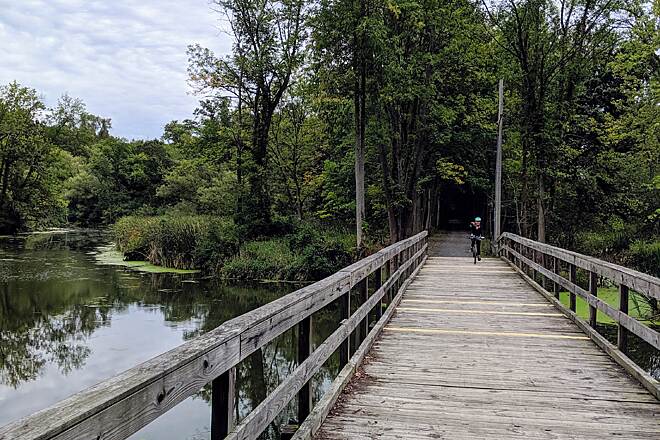 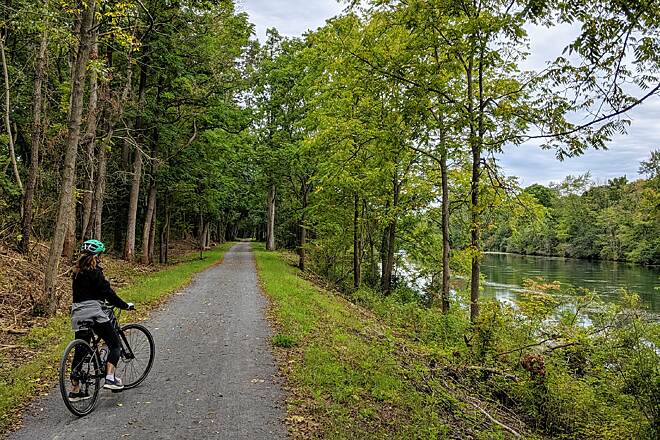 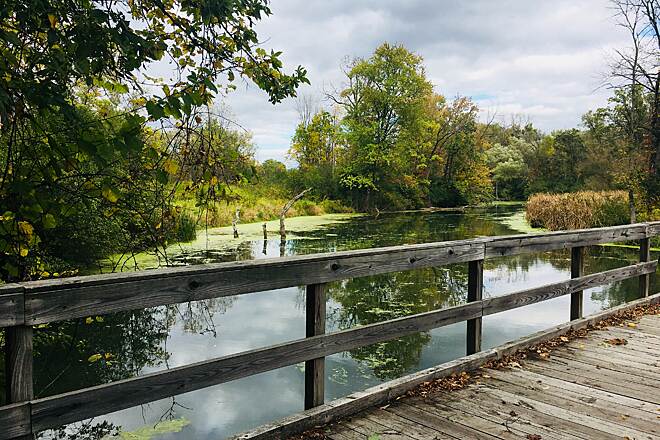 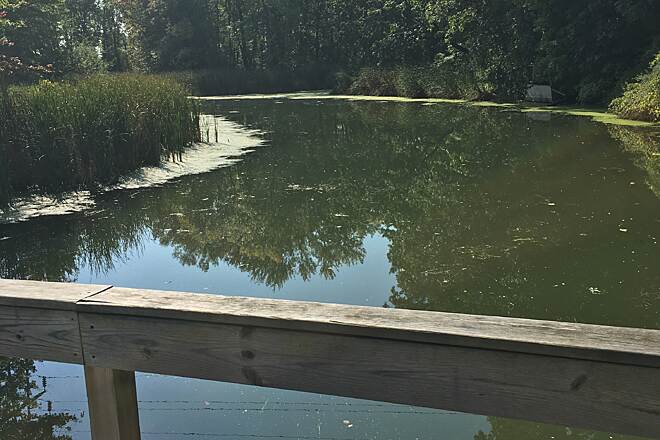 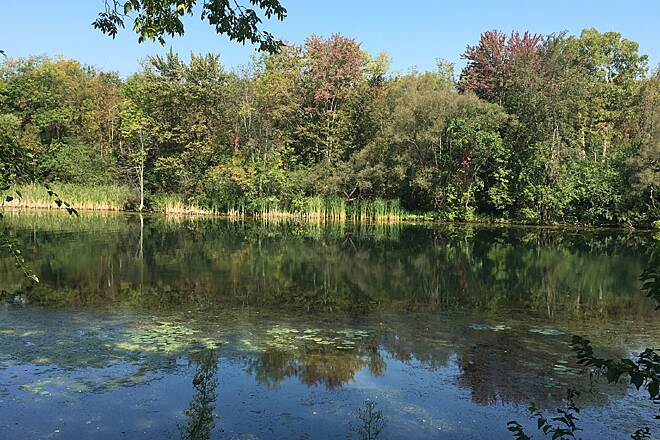 The Cayuga-Seneca Canalway Trail is a 5-mile pathway beginning in Waterloo, New York and terminating at Seneca Lake State Park.

The roadbed it uses was constructed by the Seneca County Railway from 1896 to 1897. The railroad opened to Waterloo on October 24, 1897 and in 1898 all the way along the canal into Seneca Falls, ending near where the Ovid Street Bridge is today. In 1903 the railway was merged into the Lehigh Valley Railroad. Passenger trains served the line until September of 1914. Freight train service continued on this roadbed into the early 1970's (some reports say 1969, but sporadic service remained past then). By 1975 the tracks were removed, awaiting this new era for the old roadbed, which witnessed the passing of the lives of many fine people of Seneca County & beyond.

The current stretch of trail kicks off near Lock 4 in Waterloo and heads southwest towards Lake Seneca. The heavily-wooded corridor follows the canal through the picturesque pastoral landscape and tranquil wetlands, allowing users to experience the natural beauty of the area at a leisurely pace. The trail surface is flat, smooth limestone dust, making it ideal for a variety of uses, including walking, jogging, biking and wheelchair use. After passing through the Bishop Preserve, the trail ends abruptly at SR 96A, near the Seneca Lake State Park. (But good news, a tunnel is being constructed under the highway to connect the trail to the park).

This open segment of trail is part of a bigger project to connect two of the biggest Finger Lakes, the Cayuga and Seneca, via a 19-mile rail-trail. The finished trail will run from Seneca Lake to Montezuma National Wildlife Refuge, and in doing so help highlight the natural, historical and cultural importance of the canal and the region. Eventually, plans call for it to connect and add to the Erie Canalway Trail’s 300 miles of off-road trail.

To reach the northern trailhead, head south on SR 96 across the canal. Make a right on Huff Street past Lock 4, where there is a gravel parking lot.

To reach the southern end, you could choose to park at Bishop Preserve (Boodys Hill Rd, Waterloo). There is expanded parking on West River Rd. A recently improved path links up to the trail.

You could also head to the Seneca Lake National State Park (1 Lake Front Dr, Geneva). Accessing the trail is more complicated from this point but will be eased drastically once the underpass is complete.

We rode our bikes all the way from Waterloo to the Visitors Center in Geneva. Great ride, we loved it.

We rode our bikes all the way from Waterloo to the Visitors Center in Geneva. Great ride, we loved it.

Beautiful and majestic.. thats all i have to say

I parked on the eastern terminus of the trail in Waterloo. It's very beautiful with the canal on my right and the country on my left. The garden halfway through is so beautiful that I can't put it into words.It's a great trail for those who have hybrid trails. There's not many road crossings which makes it a great trail as well. Totally do it again.

Great ride..we ride recumbent trikes and had no problem with the width of trail...even in the switchbacks going under the highway into state park.

Great ride..we ride recumbent trikes and had no problem with the width of trail...even in the switchbacks going under the highway into state park.

We had planned to bike from Geneva to Seneca Falls on this trail, as suggested in a Facebook ad from the state parks department. Included a link to a map showing the portion from Waterloo to Seneca Falls. If you are thinking of doing this be advised that the trail does not exist. The map they offer you is apparently a planning map. Very frustrating the time wasted trying to find the trail in Waterloo before figuring out finally that the trail they promote does not exist. Trail from Geneva to Waterloo was nice enough but come on!

This must be a beautiful trail most of the time. However, this morning (Aug. 18, 2019) when we were biking on this trail it was more like an obstacle course. We started out from Waterloo and headed towards Geneva NY and Seneca Lake. Between mile 1 and 1.5 there must have been about 20 downed trees. Not all were dead - many live trees were just snapped at the trunk and lay across the bike path. These trees need to be cleared if anyone will enjoy this bike path. Other that that, it is a lovely trail, next to the Seneca River.

In mid July 2019 the trail was in excellent condition, and no longer ended at the busy state highway 96A. Ramps and a bikeway under the highway and over railroad tracks now take you into Seneca Lake State Park. It's another 2.7 miles to the western end of the park, which is lovely and mostly car free.

What a great way to get off the road and get on some crushed limestone. Watch that hole in the middle of the trail somewhere around half way.
If it is hot, take a dip in the canal, mmmmmmm... swamp!

Thanks to the new Lakefront Park in Geneva you can get a longer ride. We rode from the parking lot next to the Ramada through Seneca State Park and picked up the trail there. A wooden bridge was built under 96A from the park. The only issue is that it is not marked and difficult to find. I asked a local while walking in the park and they were kind enough to help me out. If you follow the park road towards the marina there is a maintenance gate with a small sign that says Maintenance Lane. Bike through the gate and stay to the right. This will lead you to the path under 96A. I agree with the previous reviewer. Nice trail!

excellent and a beautiful trail

This is a uniformly wide trail of hard packed stone and very little elevation change. 80 or 90% in the shade due to the very thick canopy running next to the canal that connects Seneca and Cayuga Lakes. The water itself is in view about 30 or 40% of the time and it is gorgeous. This will be a great trail to ride in the fall, just a few weeks from now. Note that the actual mileage is 4 1/2 miles and is really only accessible from the Waterloo entrance. Very large parking lot right next to one of the locks. Note that will be instructions say that you go down half Street after going over the bridge from the north, there is no Huff Street sign at the corner of Route 96 and 12 Huff but there is a round Cayuga Seneca trail sign pointing the way. Once this route connect to Seneca lake state park it will add about three more miles for a total of 7 1/2 one way or 15 round trip which will be great. Seneca Lake State Park and the Geneva waterfront are fully along the north end of Seneca lake right on the water