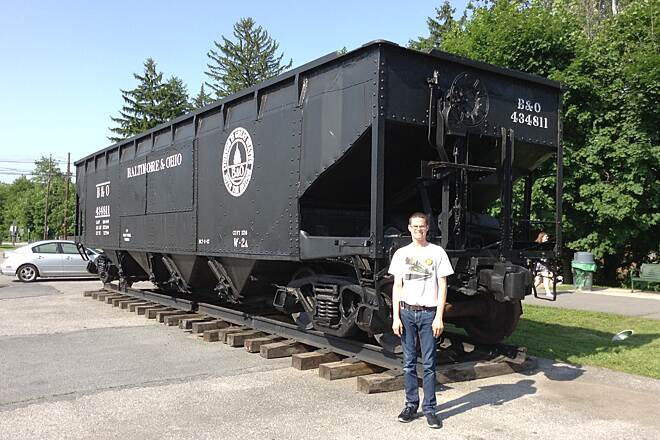 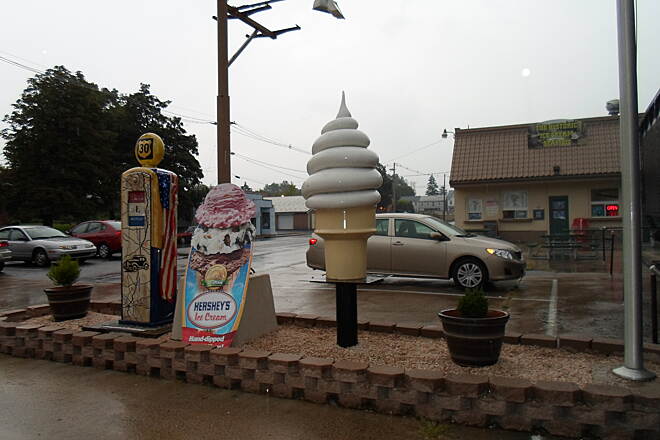 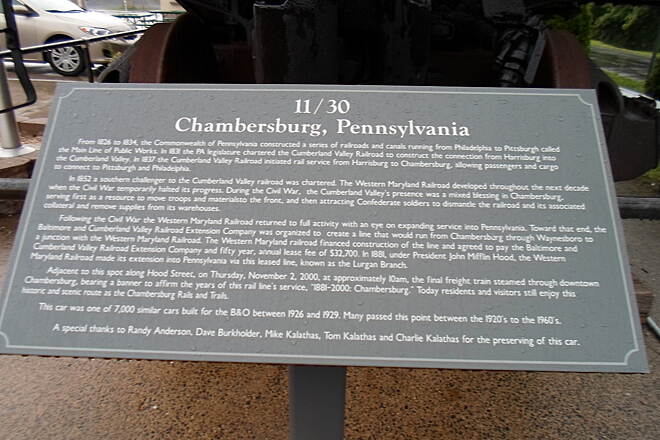 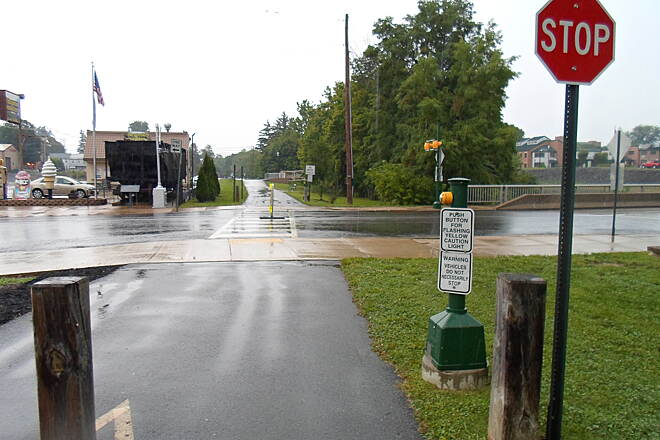 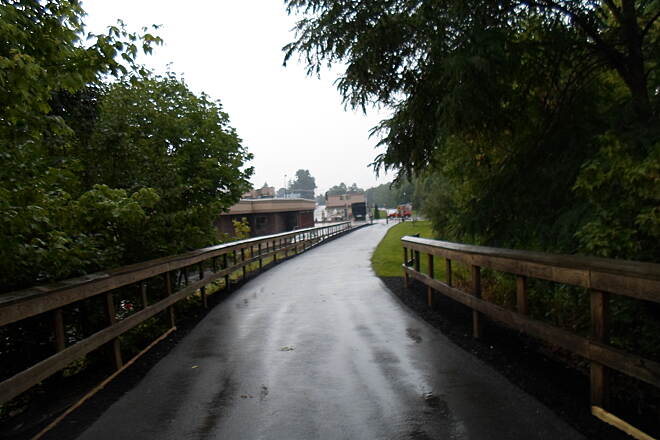 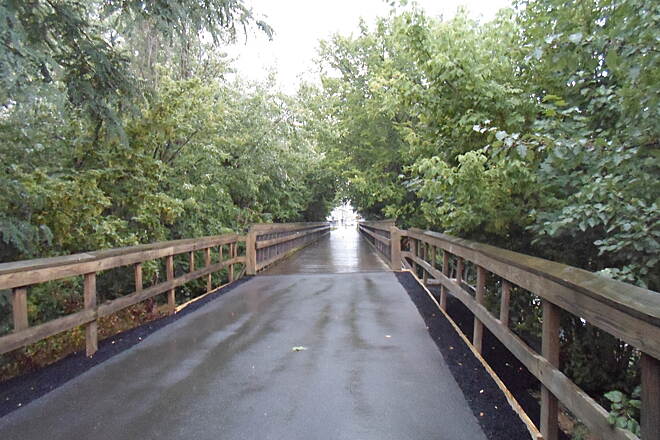 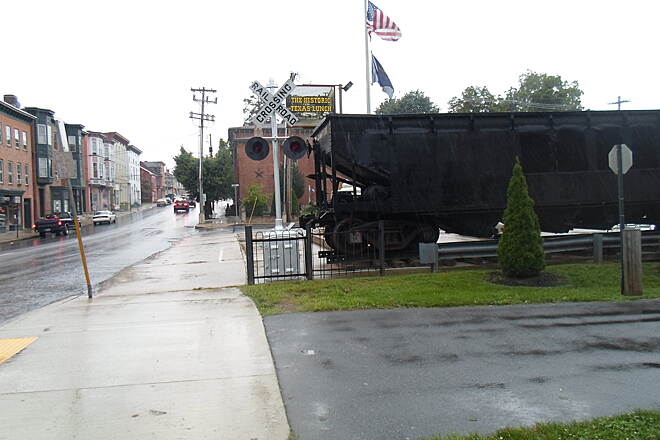 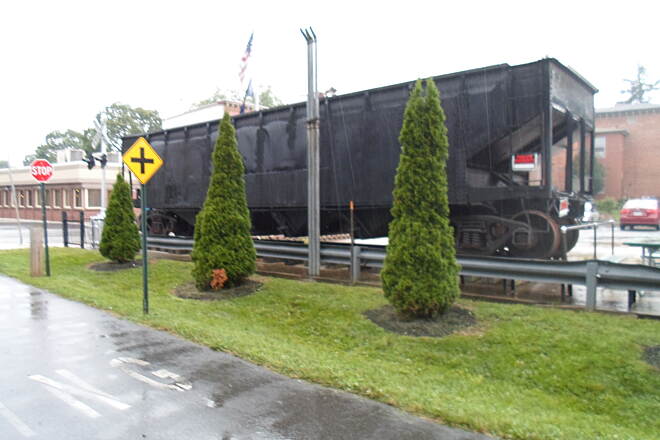 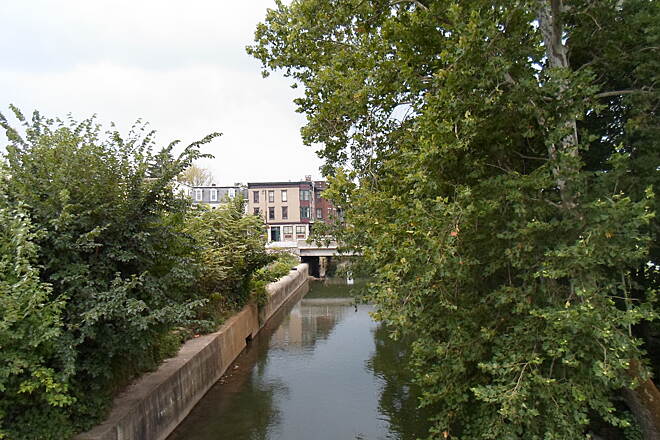 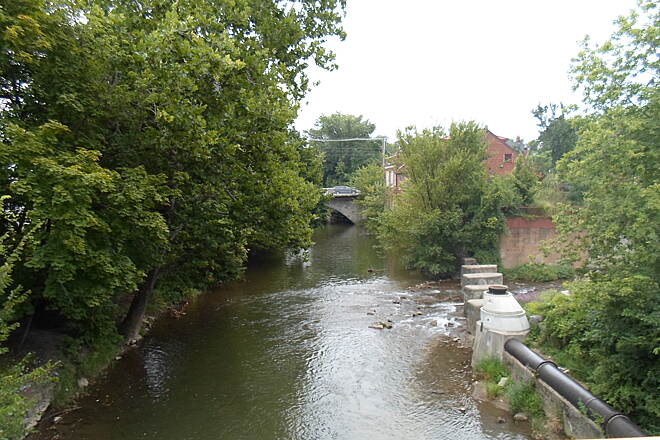 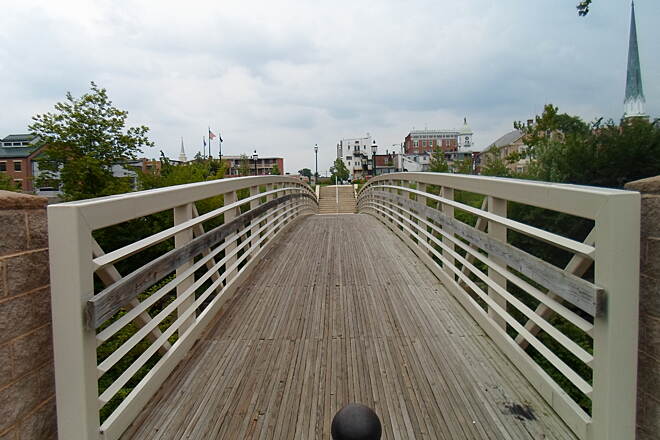 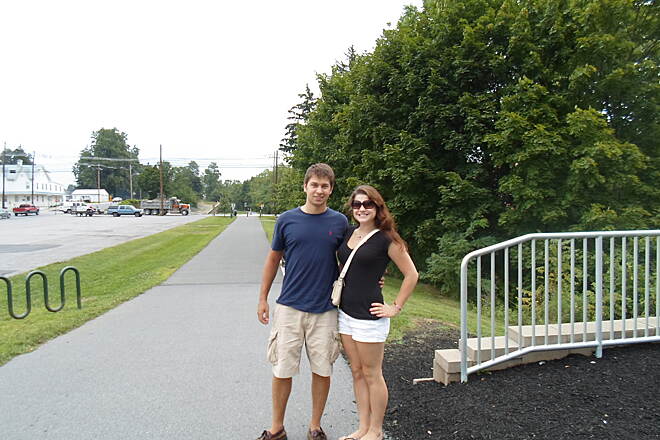 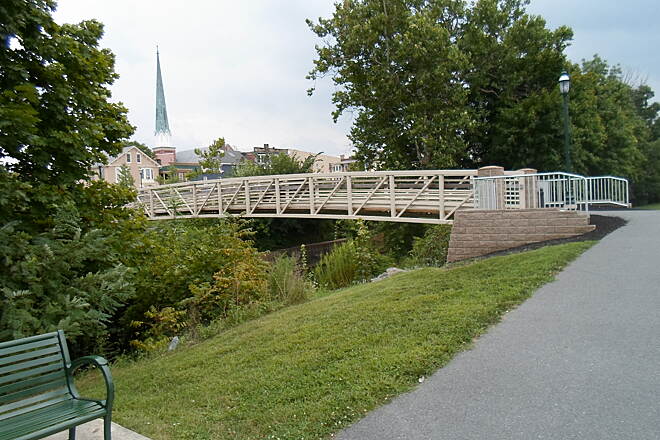 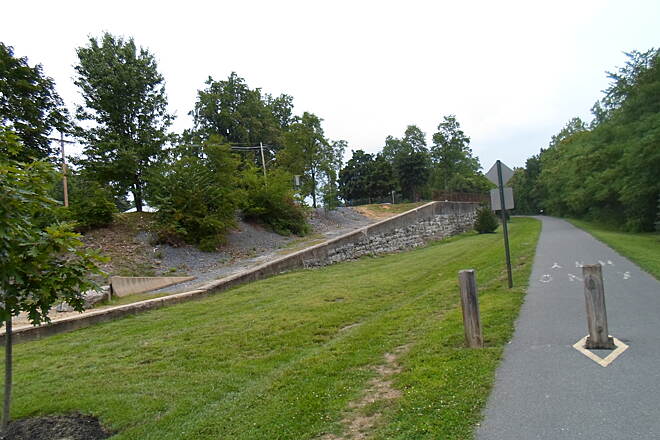 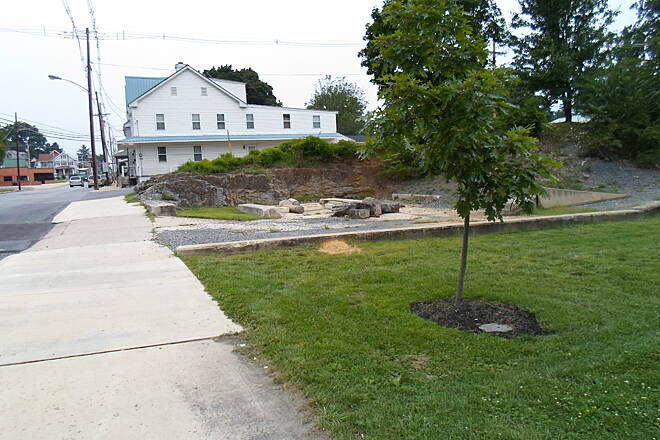 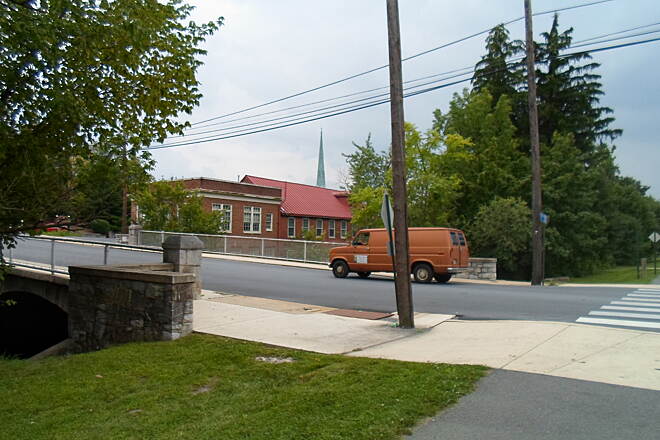 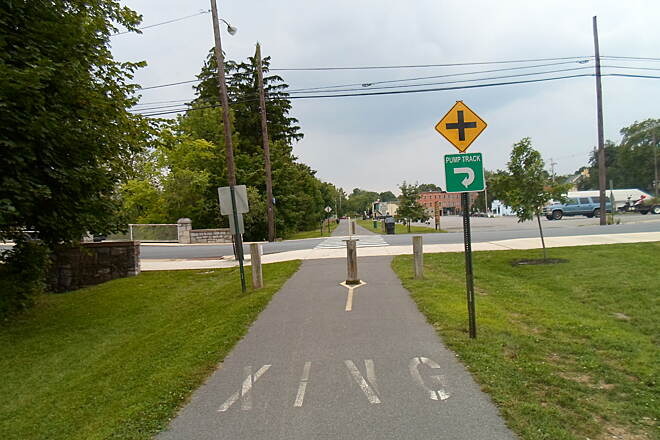 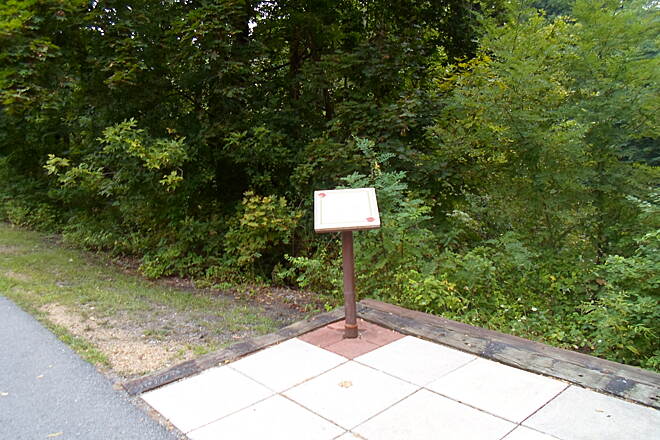 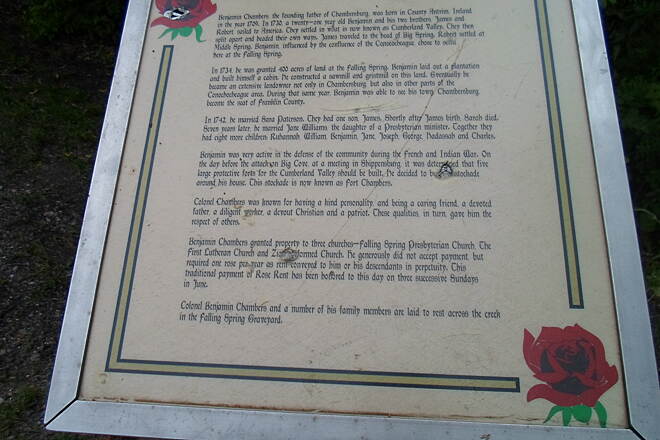 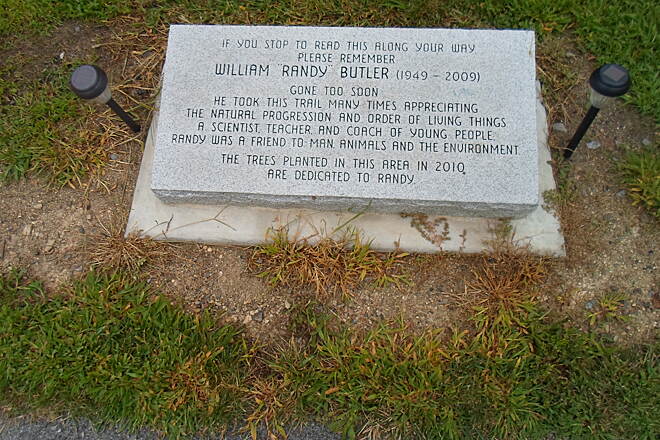 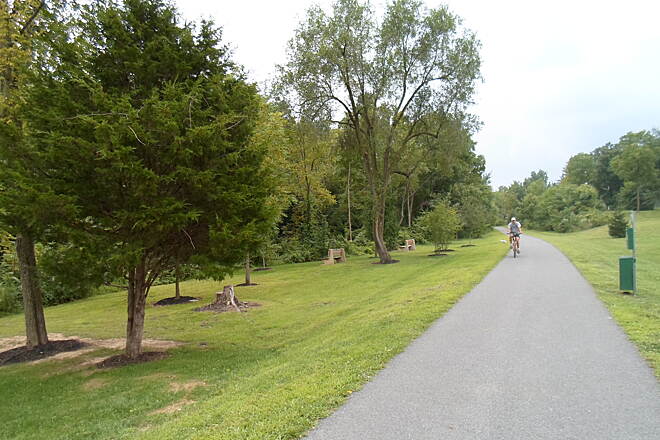 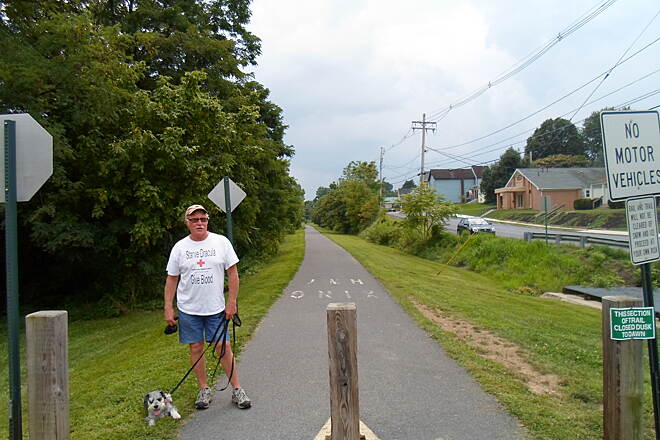 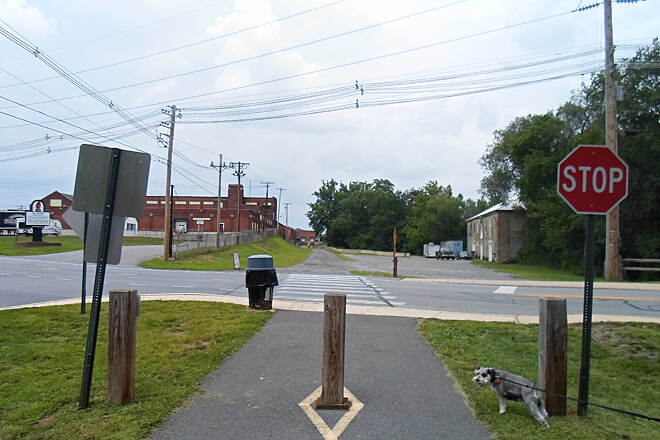 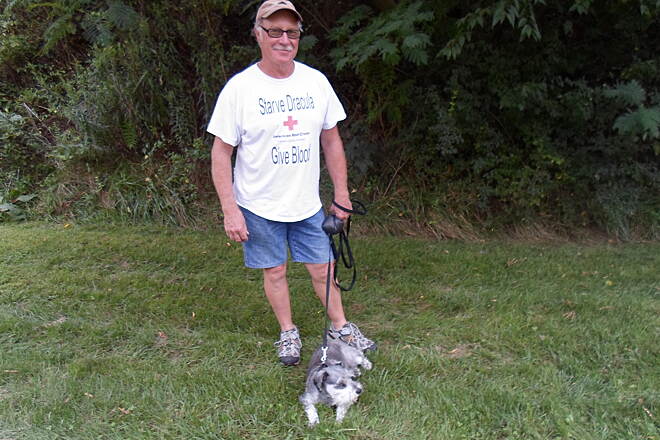 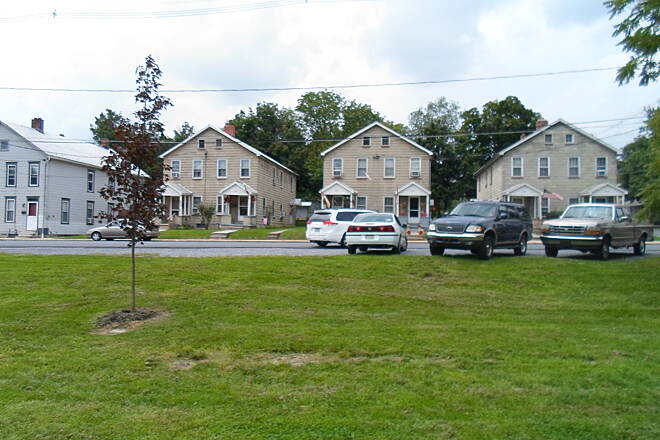 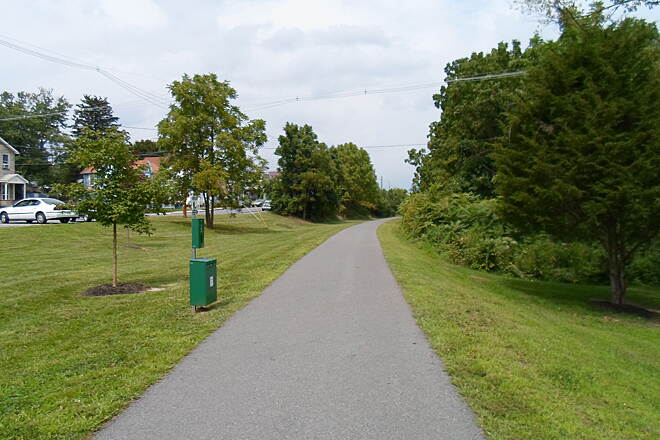 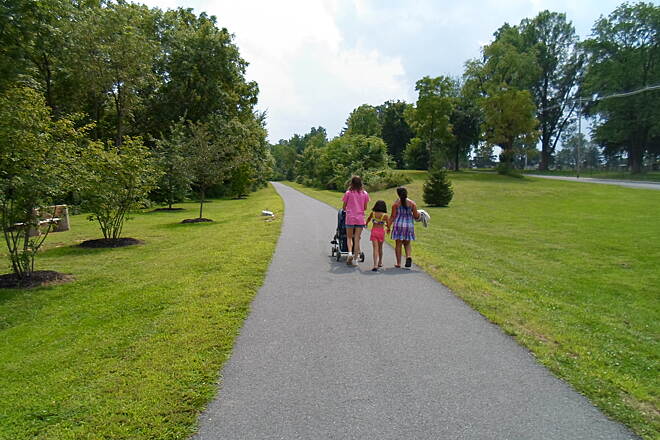 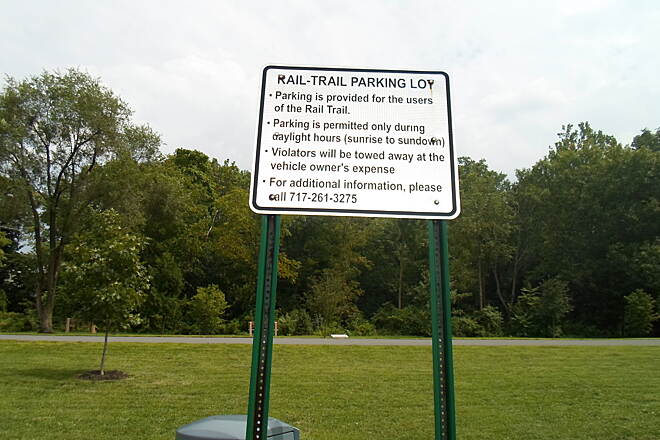 View Trail Map Send to App
The Chambersburg Rail Trail is a 1.2 mile paved urban trail that connects neighborhoods just a few blocks west of the community's central business district. Starting at South Street, the trail occupies the center of a boulevard that separates north and southbound lanes of traffic. Stops are required at each intersection. At the busier streets there is a pedestrian crossing button that activates flashing yellow lights to warn the vehicular traffic of a pedestrian crossing. About midway along the trail there is a pedestrian bridge crossing the Conocochenague Creek and providing access to downtown shops and businesses. The paved trail ends at Commerce Street.

Short 1-1/2 miles but sweet. Chambersburg did a great job on this trail with pedestrian warning lights on crossovers. Dog-friendly with several bag stations and disposal cans. A portion of the trail follows the creek for a scenic and serene walk. Bike jumps are available but far enough off of the trail was not to interfere with walkers, joggers and city bikers. Several exits to traverse into town and experience some great bistros and shops.

The 1.5-mile Chambersburg Rail-Trail may be one of the fastest turnarounds from railroad to greenway in the short history of the rails-to-trails movement. The line, which was owned and operated by CSX, was abandoned only in the late 90's, and was acquired by the borough for conversion to trail. The trail was constructed by the mid-2000's and today, less than a decade later, is a state-of-the-art asphalt greenway, lined with benches, trees and plaques interpreting numerous natural and historical features. The surrounding right-of-way was also converted from a combination of weeds and ballast to lush strips of grass, trees and bushes, and an old coal car and kitschy memorabilia like an old-time gas pump and giant, plastic ice cream cone both located next to the crossing at Lincoln Way serve as tributes to the glory days of the railroad and transcontinental Lincoln Highway, respectively. The trail also adjoins the "pump track," a rugged, BMX-style course immediately adjacent to the King Street crossing, and a footbridge across the Conococheague Creek serves as a link to Fort Park, a revitalized area that is centered around the site of Fort Chambers, which was the original incarnation of the town, and consists of a central plaza with numerous veterans' and civic memorials and monuments. The trail's high popularity with local residents, user-friendliness, with well-marked signs and several access points, as well as its role in helping to beautify and revitalize downtown Chambersburg, ranks the Chambersburg Rail-Trail alongside the Ephrata Linear Park and York City section of the York County Heritage Rail Trail, as one of the best examples of an urban greenway in central Pennsylvania.

The Cumberland Valley Rail Trail rolls 13.7 miles through a bucolic valley that’s hemmed in by the Blue and South Mountains in south-central...

This gently winding trail in Pine Grove Furnace State Park passes along the shores of two lakes and through the woodlands of Michaux State Forest....

The Gettysburg Inner Loop is a network of multi-use trails and signed, on-street bicycle routes, paralleled by sidewalks for foot traffic, currently...

The Great American Rail-Trail highlights some of the country’s most iconic landmarks, well-known geography and storied history across a...

Not to be confused with the nearby Gettysburg Inner Loop, the roughly 3-mile Gettysburg Trail is a paved walking trail that connects the Visitor...

Sitting on the corner of East Main Street and Alley 5 in Thurmont is a green and white one-story building. Murals decorate its walls, depicting the...

Plan a full day (or two) for your visit to the Western Maryland Rail Trail (WMRT), a 26-mile paved route that will take you through several eras of...

Stretching 10.6 miles through south-central Pennsylvania, this rail-trail follows the route of the former Huntingdon and Broad Top Mountain Railroad,...