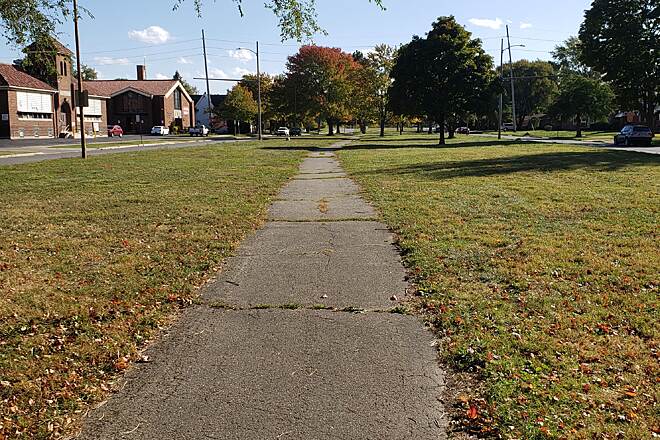 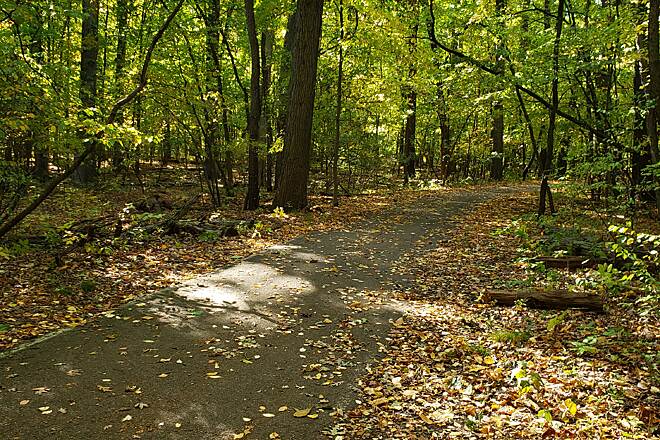 The Chessie Circle Trail (formerly Westside Corridor Rail-to-Trail) provides a paved (and compacted stone), 11-mile north-south route through western Toledo built along the former Toledo Terminal Railroad route. From its northern end at Bowman Park, the trail whizzes by residential neighborhoods and some light industrial areas on its way toward the Maumee River.

The rail-trail provides safe passage over I-475 and access to Ottawa Park (one of the city's largest parks), Highland Park, and the University of Toledo. Although most of the route is not shaded, the southernmost tip of the trail dives through the trees as it comes to an end at River Road.

Note that the trail features significant stretches of on-road riding. The only fully off-road sections are from Bowman Park to Monroe Street; frrom Ottawa Park to University of Toledo, and between Medford Drive and River Road.

Chessie to the toledo university trail

We started biking at bowman park which is the beginning of the trail. We crossed Tremaimsville Rd., Sylvania ave, Berdan, Central avenue and Monroe street. It looks like they are going to be putting a pedestrian crossing lights on these roads which will be nice. We continued on the path past Monroe Street instead of following the chessie trail. The bike path continued on straight …. we were Parallel to Douglas Road. We crossed over Kenwood St which Ottawa park is there once you cross. I think that was about 3 1/2 miles. We continued on the path that took us into the University of Toledo campus. We rode through there and connected onto the Toledo university baked trail. That trail is over 6 miles long so you can go as far as you’d like. We went up to Richards Road and turned around and came back and our total trip was 11 miles. But you could make it any distance you would like :-) path just outside the park up until Bancroft. We crossed Douglas Road and follow the path into the Toledo University. We rode through the campus until we got to the UT trail

If You Are Local

The trail is a mixed bag. The northern end is presently under development. I rode the trail in early October 2021, and they were in the process of paving the northern 3 or 4 miles. It will be wide and nice, while at the same time traversing multiple crossroads that will require you to stop more often then desired, As you move south, the trail connects with Ottawa park, which also includes multiple connected trails that are in pretty good condition and cut through woods and recreation areas, definitely one of the nicer aspects of the trail. Continuing further south, most riders will be disappointed. The trail, while paved, is old with multiple tree trunk bumps, (roots that have heaved the asphalt) some that will jar your nerves as much as your hands and seat. At the far south end, the trail will once again become worth riding. It's not a trail you will want to travel a distance to come ride. But if you are local and just want to get out and go, this might be a good option. I am semi local, and probably won't go out of my way again until more improvements are done, especially when Toledo has so many great trails within a short drive multiple directions. (See university trail, wabash, or Towpath, as three examples)

On October 7, 2020, I parked at Bowman Park to take the route south. The first approximately 2 miles was on the gravel/crushed stone trail, but then it ended at a road. I checked the trail on Google Map, which led me straight (sort of) onto grass and gravel. That didn't seem right and I knew I couldn't always trust Google, so I checked TraiLink, which I should have done in the first place. The trail zigzagged a bit, crossing the road and onto residential streets. It then went into Ottawa Park. Another section of the trail curved through the wide meridian between opposite one-way streets. Grass and weeds were growing through the cracks, otherwise it would have been a really nice section. Other parts of the route were on sidewalks, some which were narrow, uneven and had grass growing in the cracks. Some places there was an option of using the bike lane on the road. The trail also went on roads through a portion of the Health and Science campus of the University of Toledo. The southern most 1-2 miles was on a really nice wide asphalt trail. I was confused about the mile markers there since I saw 9.25, but then the trail soon ended. I was expecting to go until I saw 11. I didn't think I went that far beyond the 9.25 marker. There is parking there for only a few vehicles. I did not see restrooms of any type there, however there were some in Highland Park, Ottawa Park, and Bowman Park. Some might have been closed due to COVID regulations, but pit toilets were just off the trail in Ottawa Park. The southern portion had more signs (Bike Toledo CC Trail), than I remember seeing once in Ottawa Park and north of it. There were many many road crossings, some which had designated cross walk signals to use. It took me 1.5 hours to go north. I would recommend parking at River Road at the southern end point and bike north, follow the signs and the map on TraiLink. That way if you decide not to do the whole route, you would have done the better part.

We went to Bowman Park and found a crushed stone trail. Went to first street and still crushed stone. Don’t know where if ever it becomes asphalt.