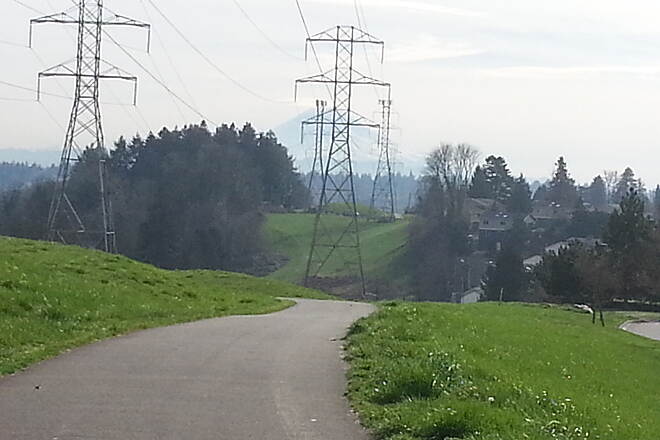 View Trail Map Send to App
The Chief Sealth Trail runs north–south along Seattle's southeast side between S. Ferdinand Street at Beacon Avenue S. and S. Gazelle Street at 51st Avenue S. The paved trail provides access to neighborhoods, shopping, schools and businesses. The trail meanders along a greenway corridor in the Beacon Hill area among landscaped mounds and includes signage as well as gravel shoulders for runners.

There are several confusing intersections along the trail: Heading south, at Dawson Street, the trail continues kitty-corner across Beacon Street. At Juneau Street, head east a few hundred yards and you'll see the trail again going south. Continuing south, where the trail curves east to 30th Avenue, head south on 30th, across Graham Street and you'll see the trail again next to the house. Farther south at Myrtle Place, cross Myrtle at the intersection and continue under the power lines. A short stretch of dirt path leads south to where the trail is paved again (near Webster St.). Alternatively, you can take Myrtle west to 33rd Street then head south on 33rd to S. Webster; go east toward the power lines to pick up the trail again.

The Chief Sealth Trail was largely built from recycled materials—mostly soil from excavated street trenches and crushed concrete from excavated city streets. Eventually, it will connect to the future Mountains-to-Sound Greenway on Beacon Hill and light rail stations on Martin Luther King Jr. Way. There are also plans to connect the trail to downtown Seattle.

There is no official parking for this trail. Access is via neighborhood streets along its route.

Born and raised here... My wife and took our 4 children, we walked, jogged, and biked the entire trail and back. There were some unexpected hills that might test your endurance! It was a little hard at times to follow the signs to stay on the trail but I suppose that's where anyone with a smart phone these days can just use the map in this app!! Overall we enjoyed the beautiful sights and views of the city nestled within the beautiful neighborhoods. We will be visiting this trail again for sure

This four-mile urban trail winds along the crest of Beacon Hill to the New Holly neighborhood. It takes in schools and small businesses and a variety of homes and is populated by friendly people who always greet me with a smile. Previous reviewers had criticized confusing intersections, I would characterize them as awkward or inconvenient as the trail is never out of sight—I was never unclear on where and how to proceed. I have walked this trail in the spring and fall and there has been beautiful flora, but I gotta admit, it’s just as dismal as the rest of the city in the winter. This is a wonderful neighborhood gem in tne south end.

Amazing trail, One of the best urban trails ever

For all the folks living within walking distance from this trail, this is excellent. Living in a city and not to have to drive to go for a walk is great.
I love it.

This is an oddly designed trail

As someone born and raised and now back living in the Webster Street area, I thought the Chief Sealth Trail would be a fun thing to explore, but looking at the Google Map and City of Seattle Map, it's very odd that the trail comes over from Kubota Gardens, then stops at Webster Street and doesn't continue under the power lines to Myrtle Street/Othello, instead if you following 35th Avenue South, it's a dead end and you can't make it down to Myrtle Street, unless you go up Webster to 33rd, which does intersect Myrtle, or following the poorly drawn City of Seattle Map, you actually need to detour onto 39th Street and follow that down to Myrtle Place or South Othello and then the trail actually resumes in Holly Park. Since no one lives under the powerlines, I'm not sure why the City didn't create a path down the hill directly to Myrtle/Othello. I can see why the other writer was totally confused, since there isn't any signage directing you anywhere.

Not a good trail

This trail was not very good at all. There weren't very many signs. I just wanted to run the mail trail not head off to other trails. There were signs for the other trails but not many for this one. At one point it crossed a 4 lane street but didn't have a sign I ran back and forth on the street looking for the trail till I saw a sign on the other side of the street. At one point the trail had a sign to go straight but it went into a neighborhood and there was nothing on the other side of the neighborhood, this is the point where I got frustrated because I couldn't find the trail again and nobody living there knew what I was talking about when I asked them where it started again. The semi marked trail was only about 2 miles. Seriously not worth the time with the amount of frustration you have to deal with. Another thing to note, a lot of really big hills and people let their dogs run on the trail unleashed and do not clean up after them I had to dodge a lot of piles. And one lady who lived near there told me to be careful because some of the dogs the owners let loose are not friendly.