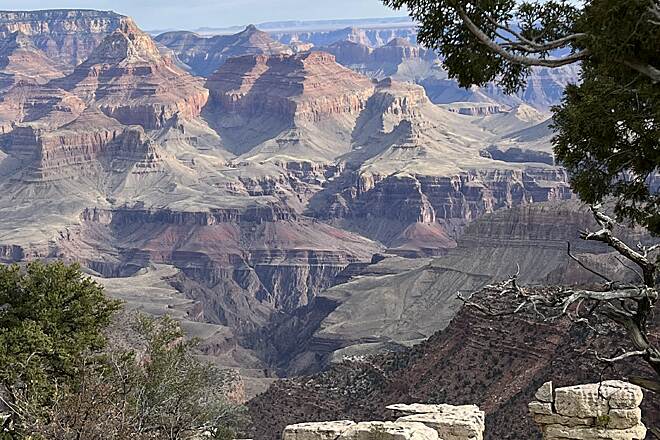 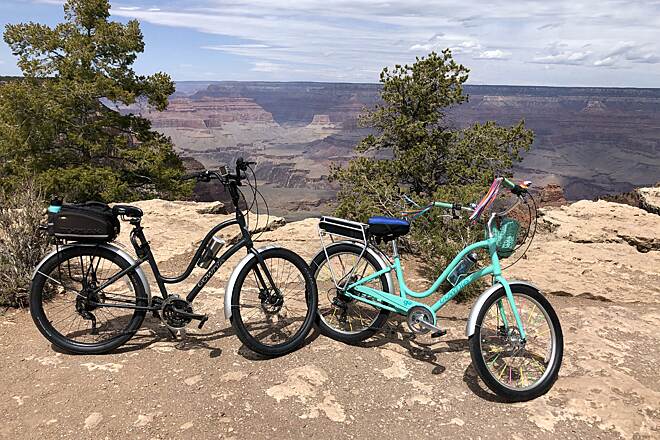 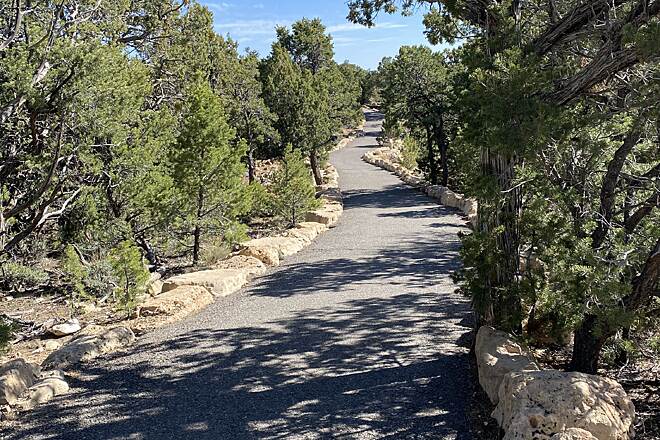 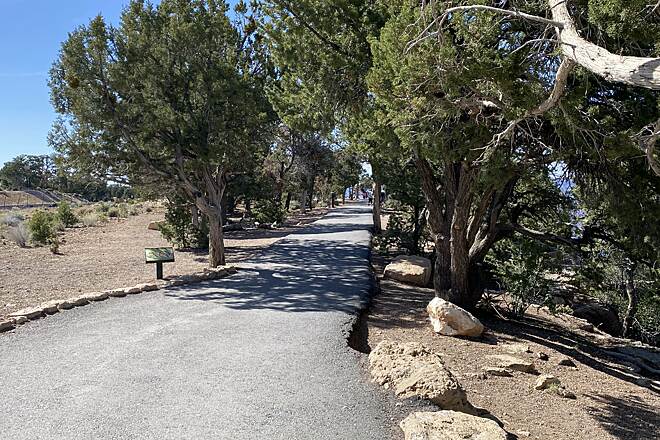 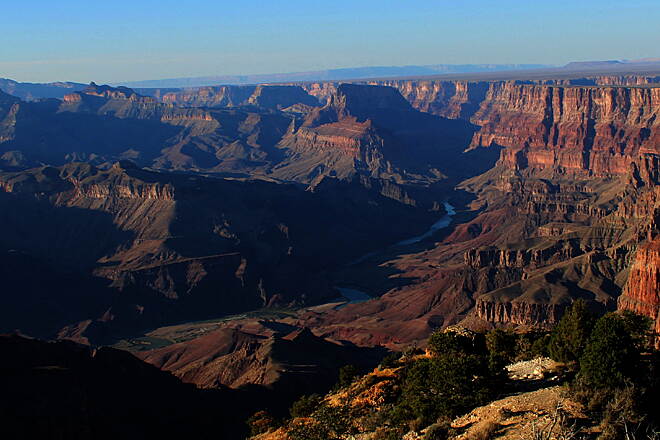 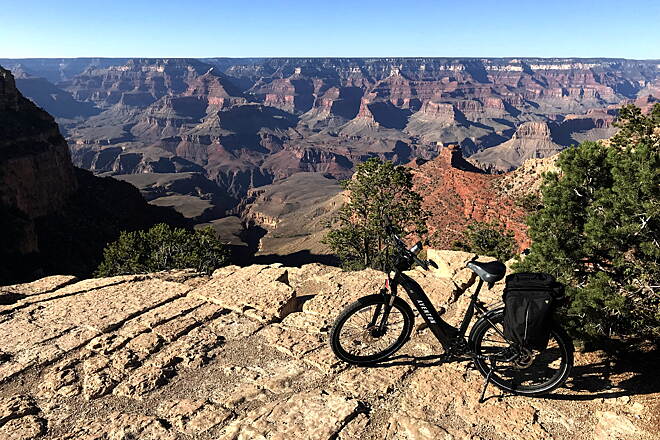 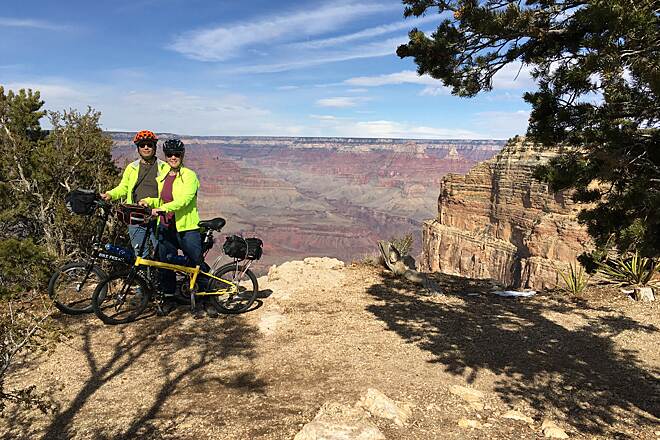 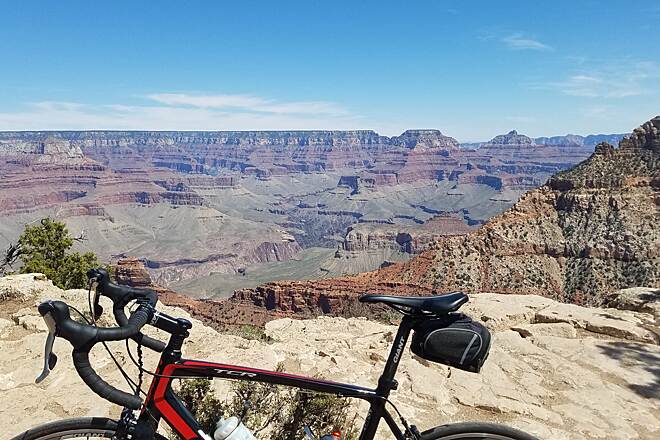 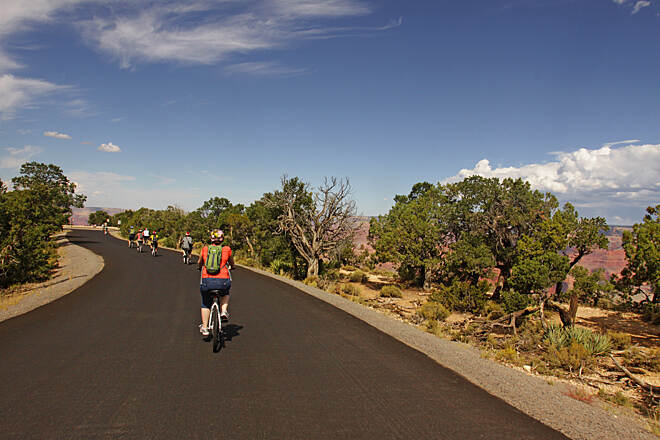 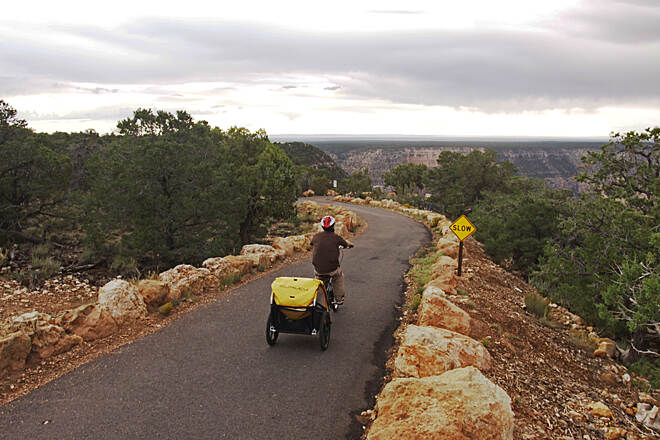 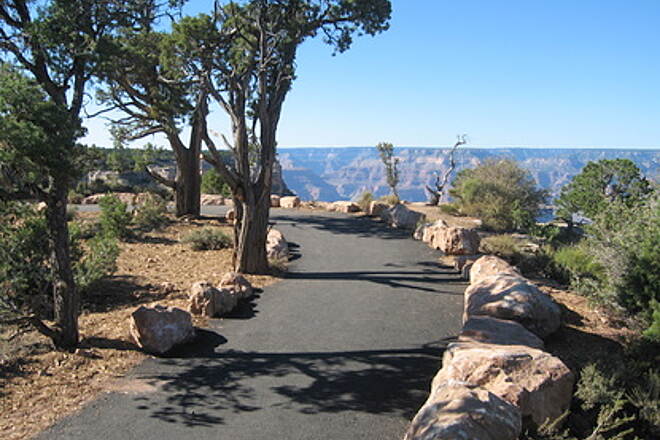 In Grand Canyon National Park, which sees more than 6 million visitors each year, the park’s greenway trail system offers a delightful way to connect travelers to those quiet moments where they can take in the awe-inspiring beauty that surrounds them. All told, Arizona's Grand Canyon Greenway Trail totals 13 miles of paved pathway for biking and walking, providing access to numerous scenic viewpoints and attractions in the park.

Running east–west, the park offers a 4.4-mile route from the Village Loop Drive and Hermit Road intersection in the Grand Canyon Village to the South Kaibab Trailhead (off Yaki Point Road). At roughly its midpoint, an additional 6.6 miles of paved greenway trail heads south from the Grand Canyon Visitor Center to the park’s gateway community of Tusayan. Note that this north–south trail has an uphill grade as you travel north from Tusayan to the park; since the South Rim is at high altitude (7,000 feet), the extra exertion of this ascent may prove challenging for novice riders.

Farther west and disconnected from the rest, an additional 2 miles of paved greenway parallels Hermit Road between Monument Creek Vista and Hermits Rest (where there is a small gift shop and snack bar).

Pedaling along the park’s greenway trail system, visitors are immersed in the scenery. Winding through ponderosa, pinyon and juniper forest, adventurers will often not only have a rim-side view of the canyon, they’ll also have a good chance to see wildlife, such as elk, bighorn sheep, mule deer, gray foxes and one of North America’s largest birds, the California condor (with a wingspan of 9+ feet!).

To learn more about the park’s fascinating landscape, a visit to the Yavapai Museum of Geology makes for a worthwhile stop; from the visitor center, travelers can take the paved, pedestrian-only Rim Trail (or the shuttle bus) for about a mile to reach it. From the museum, a walking path stretching westward illuminates the geologic history of the canyon through interpretative panels—each meter of this “Trail of Time” signifying the passing of 1 million years.

Numerous touchpoints to human history are also available just off the greenway trail in the Grand Canyon Historic Village, where there are many early-20th-century buildings and National Historic Landmarks to explore; a walking tour map of the village can be picked up at the visitor center. Railroad history buffs may even want to enter the park on the Grand Canyon Railway along tracks that first opened in the park in 1901. The trains run daily from Williams, Arizona, and drop off passengers at the Grand Canyon Depot, one of only a handful of stations remaining in the U.S. that were built with logs.

For those who want to combine their biking experience with a hike into the canyon, the South Kaibab and Bright Angel Trails are easily accessible from the greenway trail. Just be sure to bring water, and follow the park’s hiking tips before venturing out, as these dirt paths are steep and challenging.

Parking is available at the Grand Canyon Visitor Center at Mather Point on the South Rim. At the visitor center and throughout the park, you will also find stops for the park’s free shuttle bus system; buses include bike racks, so you can bike one way on the trail, then take the shuttle back. Additional parking lots can be found in Grand Canyon Village at the Market Plaza and in the Village Historic District.

Admission to Grand Canyon National Park lasts for seven days and costs $35 per private vehicle, $30 per motorcycle, or $20 per person when entering by foot, bicycle, park shuttle bus, Grand Canyon Railway or private rafting trip. Children 15 years old and younger are free, and the park also offers a handful of “Fee-Free Days” for all ages each year.

The trail was beautiful through the forest and on the rims it was spectacular and majestic! I kept trying to soak up as much of this experience as I could. I just didn’t want it to end. The paved trails were such a pleasure to bike on.

This was so spectacular and worth it!! The majestic view from the rims was just breathtaking! Best bike ride I have ever done.

The Greenways should have separate entries.

One) The Tusayan to Grand Canyon Village Greenway seems like a good idea, but the execution is lacking. I rode from the Village toward Tusayan after much difficulty actually locating the Greenway in the Village because the signage is non-existent. Once I stumbled upon the Greenway, I found the asphalt surface to be far from smooth. I was frustrated enough with the jarring ride that upon reaching the Grand Canyon south entrance station, I rode back to the village along the highway, State Route 64. Two) The Greenway within Grand Canyon Village is somewhat acceptable, but don't expect to have a leisurely, smooth and uninterrupted ride with the pavement cracks and starts and stops every time you intersect a roadway. With the low speed limit, I found it smoother, more comfortable, safe enough and just as easy to simply ride to the right along the roadways. Granted, I am comfortable riding in traffic and always use bright colored clothing with flashers on the front and rear of the bike.

We drove up from Flagstaff on a day trip to ride the Grand Canyon Greenway.The earlier the better as the tourists are back in force.We parked at the Visitors Center and headed west.We were there in April so the heat was not a problem but pay attention to the wind direction and strength which with the altitude can require more effort for those from lower elevations.The trails to the area restricted to just bus traffic are pleasant and when the restricted road begins keep in mind the tourist buses will not pass you when you are peddling and you must come to a full stop for them to pass!!Not what you may want to do on a occaisionaly sharp grade and to make matters more challenging there are not paved shoulders which allow for a place to pull over.That being said the ride and views are well worth the effort{no e-bikes for us yet} and a visit to Hermits Rest is a quite special stop to refuel.The road back east is a steady uphill grade so a tailwind its preferred!Enjoy the unique ride and watch the weather forecasts.

WINDY, so bring a windbreaker. Use sunscreen against the intense sunlight. Smooth, paved trail with lots of places to stop and soak up the beauty of the mighty Grand Canyon. We arrived at 10:30 am and by the time we left several hours later it was getting people-ly. Definitely a slow pedal to enjoy this natural wonder.

Wonderful Way to Experience the Canyon!!!

We were pleasantly surprised by the two cycling paths along the Canyon's South Rim. Thus, if you're questioning whether or not to take your bikes, take them!

It will just be you and the buses on the road (not too many of them in early May and piloted by extremely courteous drivers). Enjoy the Canyon on one side of the road and a beautiful, fragrant pine forest on the other side.

Pedal along, stop at all the stunning viewpoints, enjoy.

BTW, if you don't have bikes, you can rent them inside the Park.

I rode Grand Canyon greenway to Hermit road then up Hermit road to Hermit’s rest, a relatively quiet and spectacular ride. The only motor traffic was buses, which slow to give you time to pull over before they pass. Several miles of route are on parallel off road path. Great way to see the overlooks on western side of south rim area!

I love the Grand Canyon, and this trail just makes it even more perfect! The views are tremendous.

I parked by the IMAX. I was happy to see that the trail was paved the whole way so okay to be used by road bike.

I did Tusayan to Yaki point initially, but also took interest in Hermit's rest. Hermit's rest has plenty of signs pointing the way and can be accessed using the greenway bike path through Grand Canyon Village. You take Hermit road, a 2-lane road closed off to regular vehicle traffic and open to foot and bicycle use. You do however have to share the road with tour buses which come every 20-40 minutes or so.

Tusayan, Yaki, Hermit ended up being 37 miles for me.

Great entry to the Grand Canyon

Brought our bikes up from Flagstaff to ride this pleasant back woods path into the Grand Canyon. Free parking next to the IMAX theater at the trailhead. Nice meandering ride far from all the cars and people. Hardly any other bike traffic too on this Wednesday afternoon. As the previous reviewer states, once at the Canyon you can't ride next to the rim in the most congested areas; but even then, lock your bike and walk 20 feet to see one of the seven natural wonders of the world! The trip to the Canyon is an overall 500ft rise which makes the trip back very easy - lots of coasting. Avoid the entrance fee and the lines for shuttle buses. This is the way to go. Enjoy!

"As of my visit during July of 2002, completed sections of this Greenway Trail were located only at the Canyon's South Rim. Since bicycles are prohibited on ALL paved and unpaved park trails with the exception of the Greenway Trail, visit the South Rim if you'd like to ride your bike on a motor vehicle free route within the Park.

Unfortunately for those who prefer biking to hiking, there’s currently only one “ringside” observation point accessible from the Greenway Trail (the Yavapai Observation Station). If you’d like to view more of the Canyon, you’ll have to leave your bike behind and hike/walk along many of the trails currently closed to bikes.

The Greenway Trail is nicely paved, about 10-12 feet wide from start to finish, and a bit hilly in spots. There are two relatively busy street crossings along its primary route. It’s a great place for a short bike ride, fast walk behind a baby stroller, or challenging in-line skating excursion. Canyon views are limited, but it's a nice place to go if you'd like some pavement under your feet for a while.