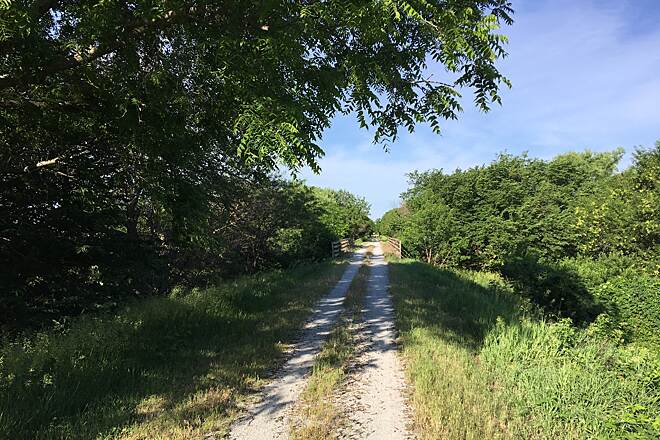 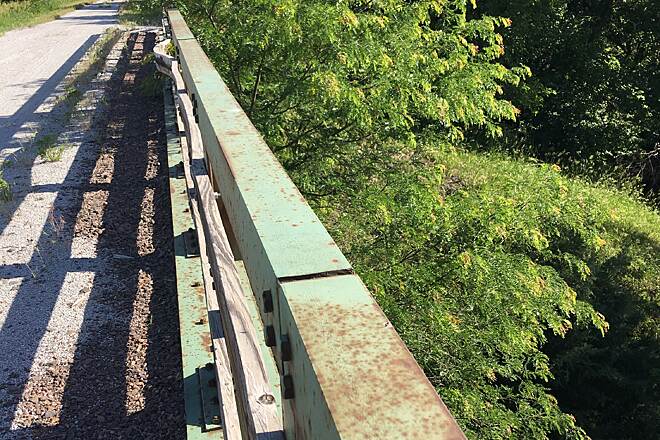 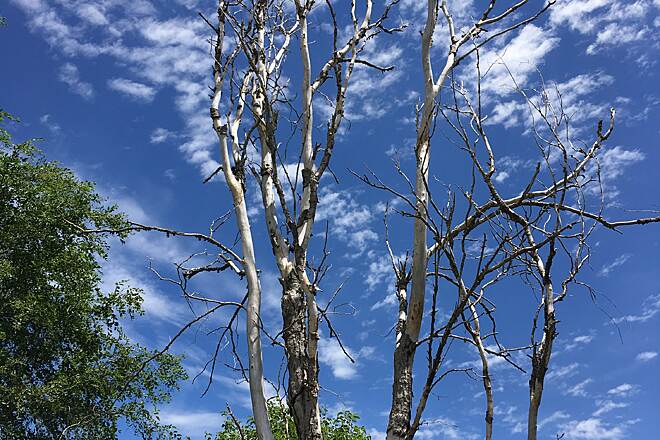 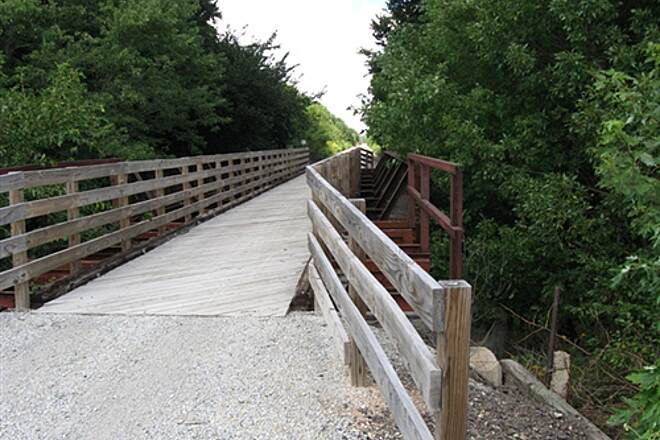 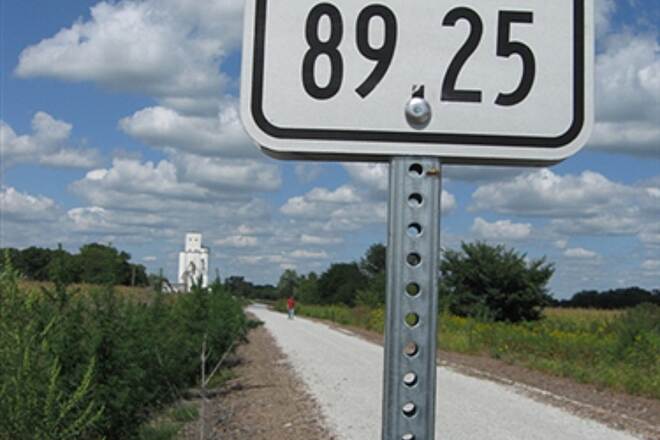 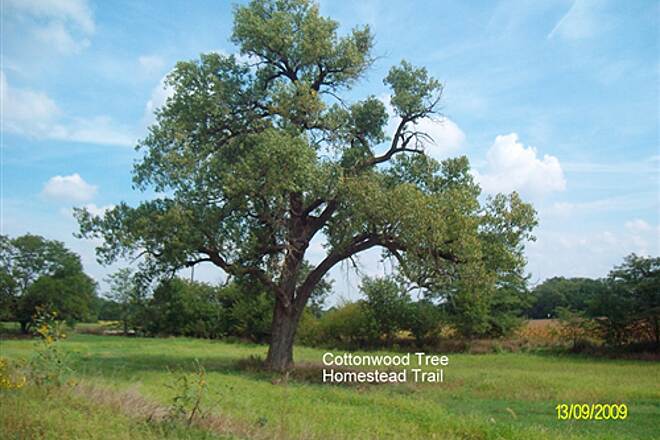 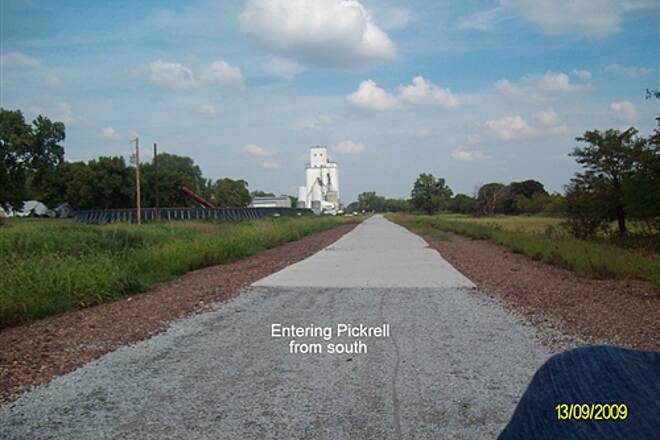 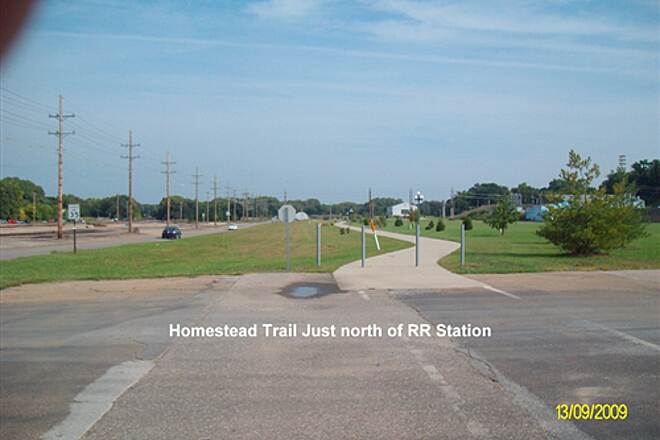 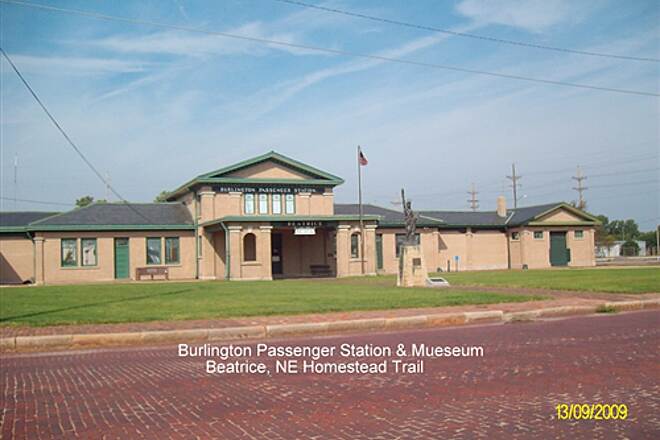 Closure Notice: Starting June 2021, a roughly 1.5 mile segment of the trail south of Roca between Martell Road and 25th Street will be closed for needed bridge replacement. The closure is expected to last at least through the end of 2021; please check with the Lower Platte South Natural Resources District for the latest updates before planning your outing.

The Homestead Trail follows the route of a rail corridor put up for abandonment by Union Pacific in 1999. Construction began on the trail in 2007 and was completed in the summer of 2012 by a partnership of the Nebraska Trails Foundation, Lower Platte South Natural Resources District and the City of Beatrice.

Running 40 miles from Lincoln in the north to Beatrice in the south, the limestone-surfaced Homestead Trail offers excellent connectivity for the residents of this part of Nebraska. In the north, the Homestead Trail links with the Jamaica North Trail, which travels northward deeper into the heart of Lincoln. Adventurous travelers can trek farther north from the Jamaica North Trail to Haymarket Park—Lincoln's baseball stadium—via the Salt Creek Levee Trail.

Continuing south from Lincoln, the Homestead Trail winds through acres of farmland and comes close to the tiny villages of Roca and Princeton. The trail then runs through the city of Cortland, where limited amenities await weary bikers and walkers. The 9 mile section from Cortland to Pickrell, which was completed in 2012, winds through some greener scenery of relatively dense tree cover and crosses over 18 restored railroad trestles. In Pickrell, hungry travelers can find a bite to eat.

The Homestead Trail currently ends in downtown Beatrice, the largest city and county seat of Gage County. The Gage County Historical Society and Museum is located at the Beatrice trailhead in the restored Burlington Railroad Depot Passenger Station originally built in 1906. Be sure to check out the history of the rail corridor you just traveled upon! The beautiful Gage County Courthouse, which opened in 1892, is just a few blocks from the end of the Homestead Trail as well. The Homestead National Monument, for which the trail is named, is another short ride along State Route 4 from Beatrice, although an off-road connection is planned for the future. The monument commemorates the impacts of the Homestead Act on the United States and offers numerous exhibits for those not yet tired from their journey.

The Chief Standing Bear Trail extends along the same former rail corridor. Construction is ongoing at the northern end of the trail in Beatrice through 2016. The Blue River Rail Trail occupies the southern end of this corridor from the state line to Marysville, Kansas. This allows trail users to travel uninterrupted from downtown Lincoln, Nebraska, to Marysville, Kansas, along an impressive network of trails.

Parking for the Homestead Trail is available where it meets the Jamaica North Trail at Saltillo Road in Lincoln. Street parking can also be found in Cortland, while a dedicated parking lot is located off of West Pickrell Road in Pickrell. Parking is most abundant at the Beatrice trailhead at the intersection of Court Street and 2nd Street.

Sept 2021! Rode from Lincoln and the trail was in great shape! A bridge was out so there was a slight detour, but it kicked us into some gravel through some scenic Nebraska farms. We ended the day in Beatrice at Chatauqua Park. Slept in the park and rode back into Lincoln the next day. Great event GREATtrail!!!

I only rode this 5 miles from the TH by the bar “The Rail,” but it was very pleasant. The trail starts out being paved but turns to limestone approximately 1 mile. There were turkeys and their babies within that one mile, which is partially shaded. The trail outside of Beatrice is well shaded for the first couple of miles. This makes for a cool breeze while hammering the pedals. You’ll cross four wooden bridges in those 5 miles, tracing Indian Creek part of the ways. I even spotted a fawn drinking from the creek. The only down side was the brush sticks out too far when crossing the roads. The city need to trim it. I highly recommend surfing Homestead “Express” Trail for a reconnection with nature and a blast into Gage County history!!

Warning: the section from Princeton to Cortland, NE is horrendous. It runs along HWY 77, right next to it. After that it's a beautiful, peaceful trail! There is another section that is kind of cool in midsummer, but sort of boring and long in the spring. It's about 2 miles through a cornfield, after Pickrell, NE. I love the section after that, going to Beatrice, NE. I'm so excited that the Blue River Rail Trail is soon to be connected to the Homestead!!

Rode the southern 18 miles of this trail from Beatrice to Cortland into a northerly wind on a sunny, warm day. Parking in Beatrice is available at the stated trailhead, but not on the wide cobblestone street facing the historical museum. Almost missed the sign, and had to move the car. There are picnic tables but no other facilities at the trailhead, and only a few irregularly spaced small benches along the route to Cortland, which itself has a grouping of concrete benches in the sun but again no other facilities.

The trail goes through Beatrice with one busy highway crossing, then heads off on its own until meeting the highway and running alongside for a little bit going into Cortland. I turned around here, but the trail map shows several more miles along the highway before moving away again. The scenery north of Beatrice was rural farmland, a mix of shading trees and sun. The last few miles into Cortland featured a lot of grasshoppers on the trail, with quite a few landing on me or my bike as they jumped out of the way.

The trail surface was quite good for the most part. I came across a few ruts, some stretches with weeds starting to grow, and one brief stretch of very loose big gravel that had to be walked. Overall a moderately pleasant ride.

Rode from Marysville to the north side of Lincoln last Saturday (8/27/16). It was great! Some stretches of this Homestead segment are sort of boring and loud where it parallels the highway, but otherwise it is a nice trail. Getting from Chief Standing Bear trail to Homestead trail in Beatrice isn't clear, but not too tough. Just print out a map ahead of time. Jamaica trail into Lincoln was officially "closed", but still doable. I liked being able to bike through Lincoln on dedicated paths, but there were no maps posted after leaving Jamaica trailhead. I finished in Northeast Lincoln close to I80 after 85 miles. Great day!

Loved and Miss this trail!

I have heard that it will be repaired this fall. I will be a frequent visitor again!

I rode this trail in early June, 2016 as part of an out-and-back three day ride south of Lincoln.

Started at the northern end where it joins with the Jamaica North Trail, and left it at E Hickory Road, about 3.5 miles N of its southern terminus in Beatrice (pronounce that 'be AT triss').

The trail was perfect, or near-perfect, the entire 27 miles that I rode.

There's an 8.5 mile stretch of the trail N and S of of Cortland where the trail is side-by-side with US77, so there's auto traffic noise here, but otherwise, this trail is super quiet and a joy to ride.

There's a convenience store just S of Cortland, otherwise minimal services until you get to Beatrice. Couldn't find anything in Pickrell.

There are mileage markers every quarter mile starting S of Cortland all the way to Beatrice.

In three days of biking this and three other connected trails, I saw less than three dozen people.

I road the 10 mile segment between Cortland and Pickrell 08/14/14. Overall, the trail was in pretty good condition, with a thin layer of pressed stone that was easy to ride my road bike over (at approximately the same speed as I bike on pavement). There was one area near Cortland (just south of Ash Road) where there were deep ruts in the trail, and a lot of large, sharp rocks. That combination is a bad one on a road bike, and I nearly wiped out / popped a tire. Otherwise though, it was very easy to bike, and the only places to slow down were near the intersections. Some of the wooded area (between maybe miles 5-8) had a fair amount of debris (small twigs, weeds, nuts, etc.), but not enough to cause problems. There were some wild raspberries near Pickrell, and a lot of choke cherry trees throughout. I only passed one other person (jogger) during my ride. Most of the route was pretty far from the highway, and traveled near the stream and through farmland.

The 20 mile roundtrip took me about 90 minutes. There were not restrooms at the TH in Cortland or Pickrell, but presumably some of the businesses have them. I wish I had known that the trail turns to pavement beginning in Pickrell, because I would have preferred to park there and bike pavement rather than pressed stone.