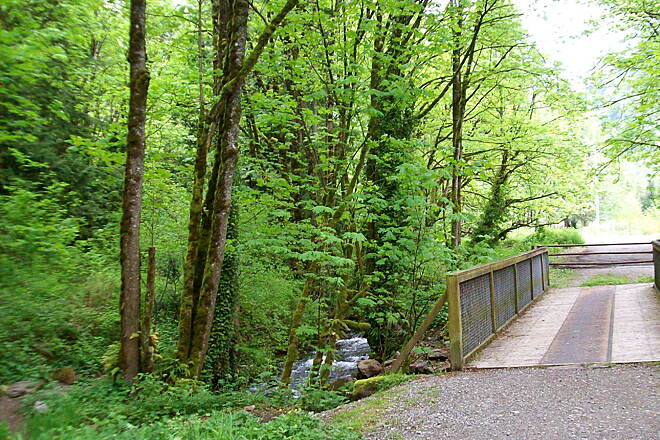 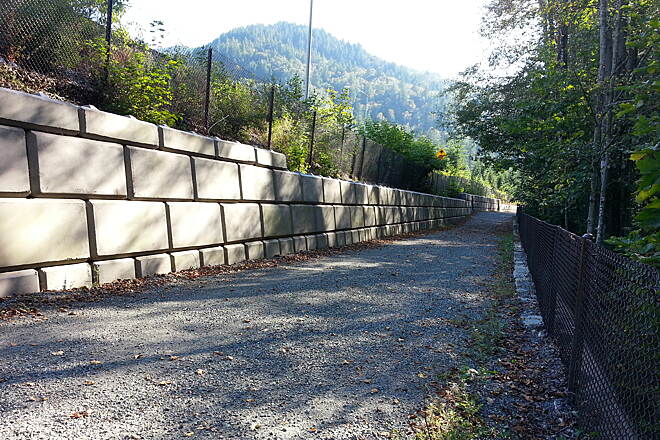 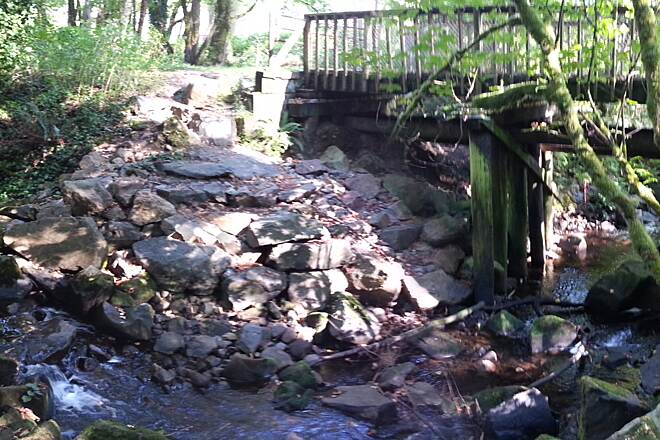 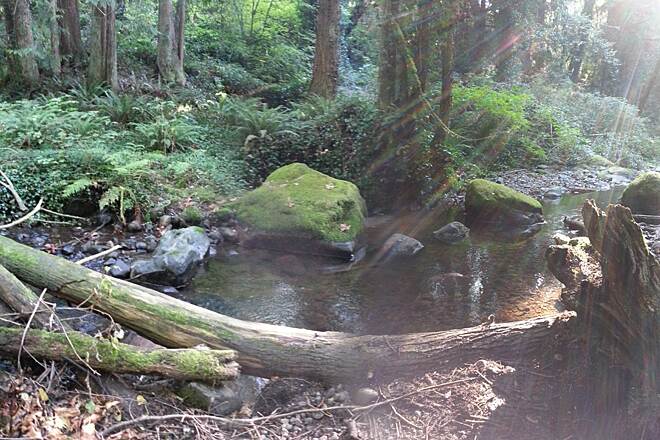 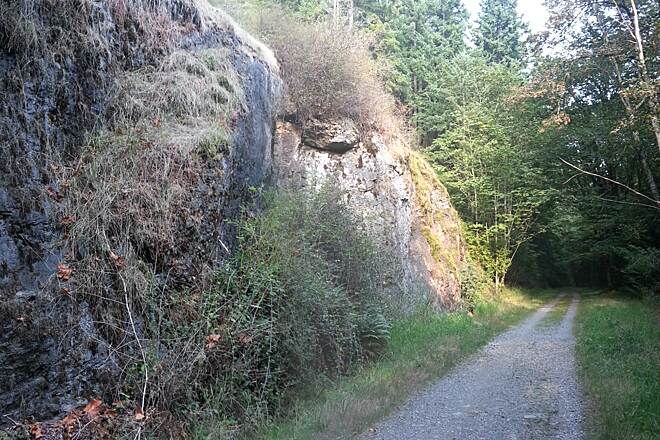 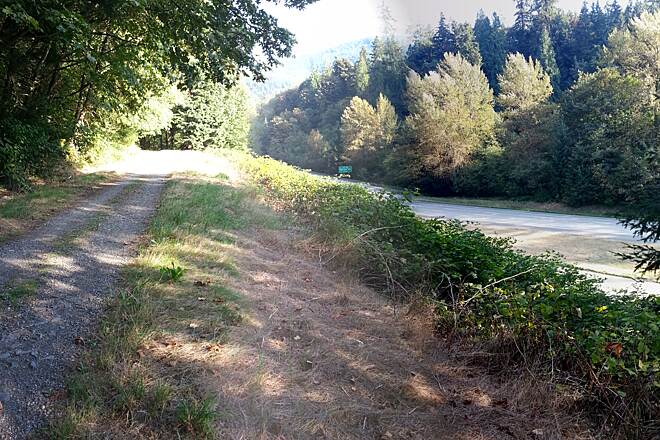 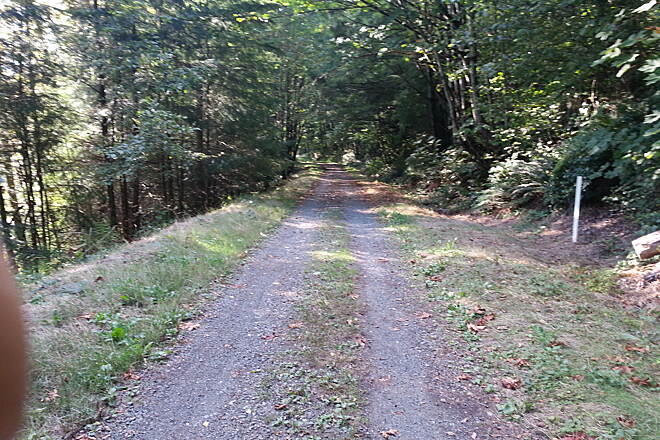 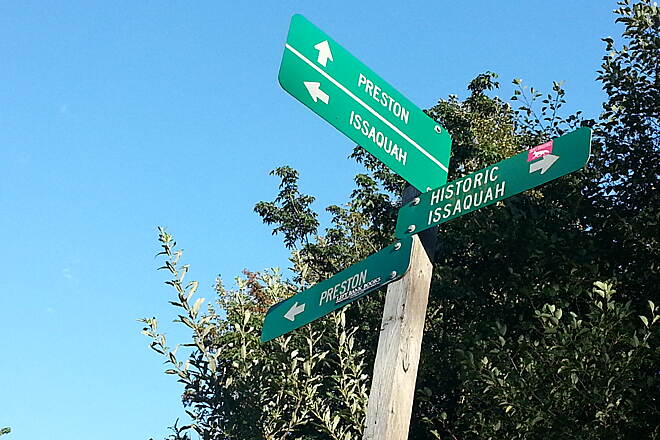 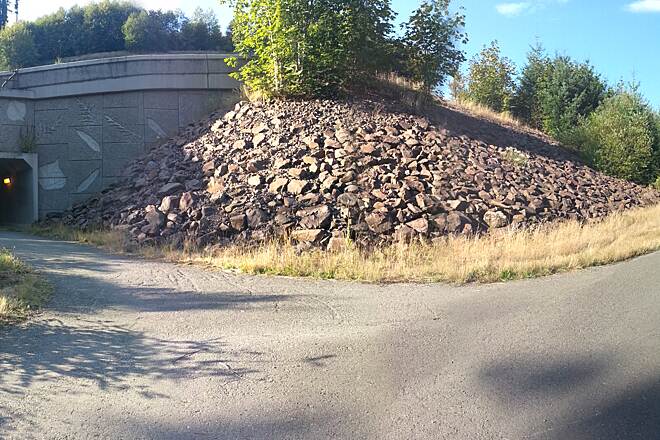 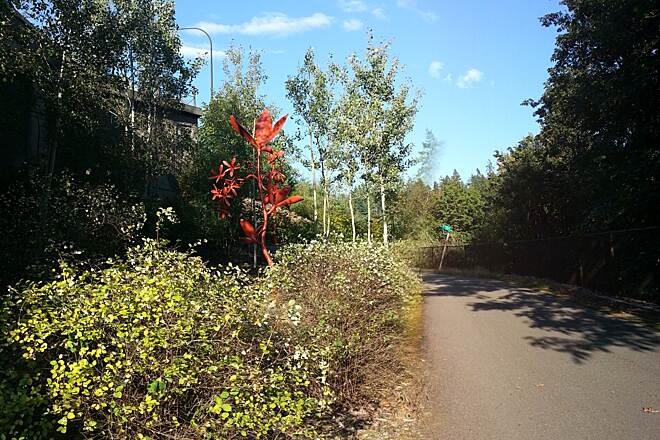 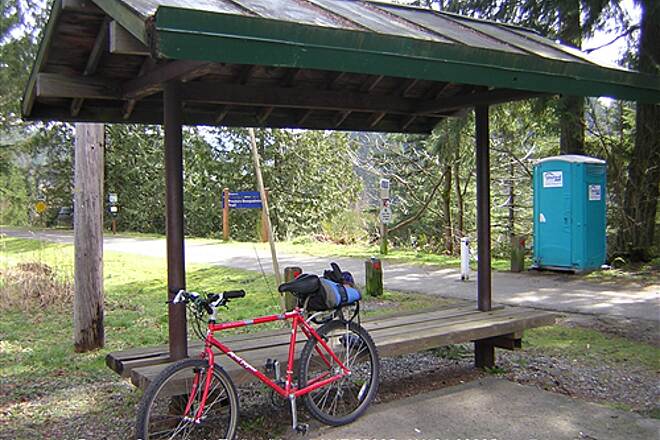 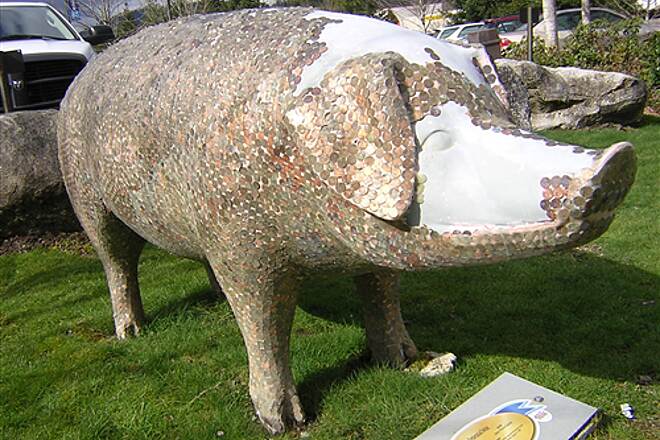 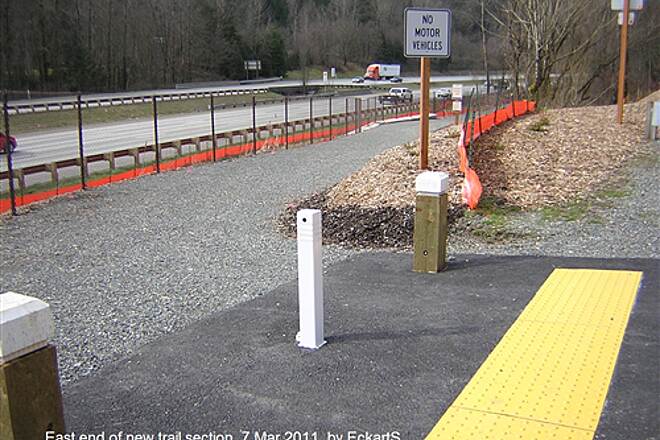 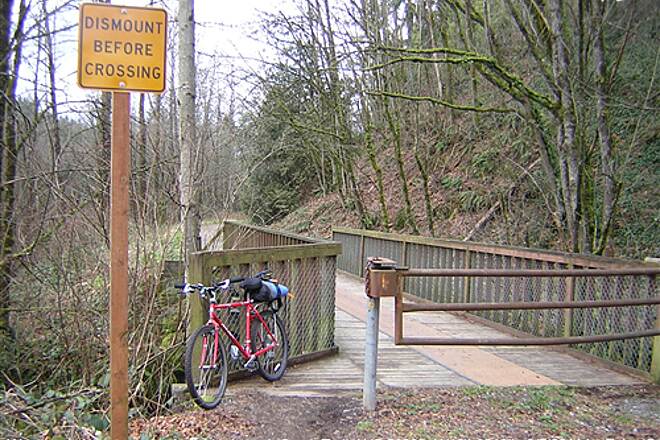 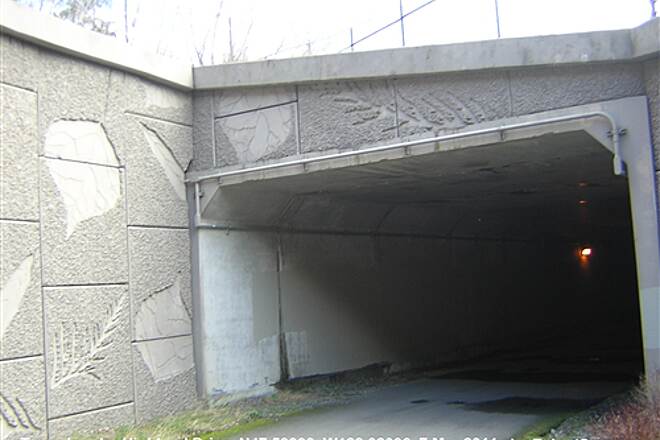 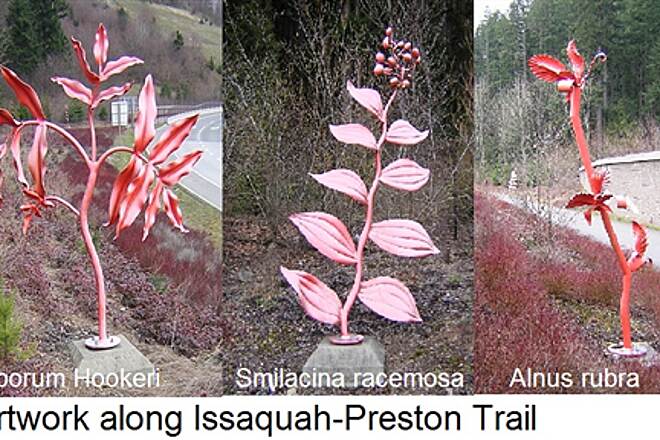 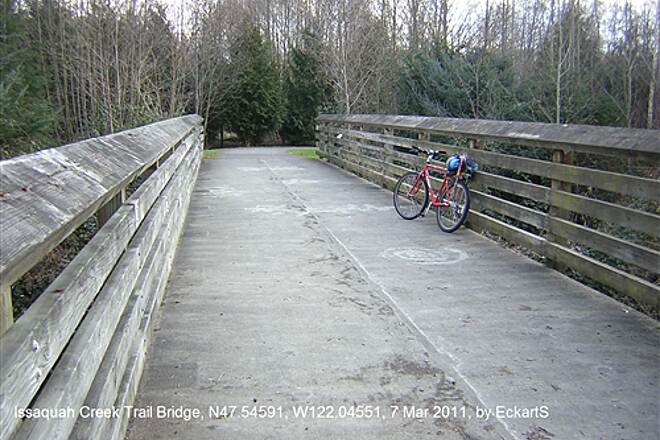 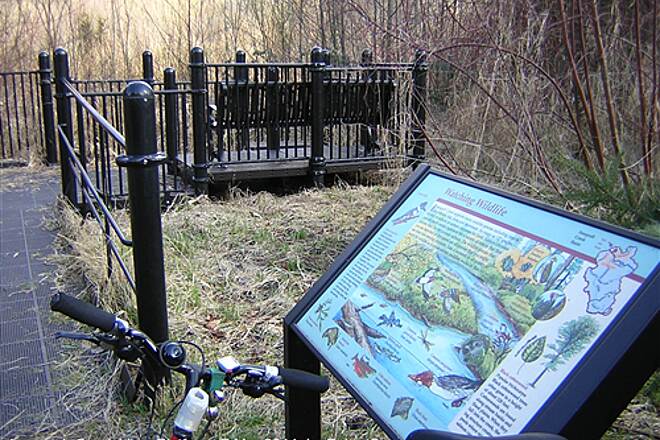 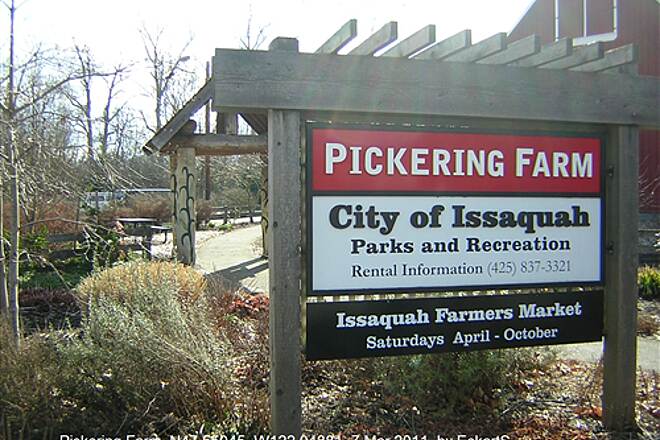 Suburban sprawl gives way to deep forest and rural farm lots as this rail-trail follows an uphill grade from Issaquah to the outskirts of Preston. The Issaquah–Preston Trail is among a group of trails in the Mountains to Sound Greenway that link Seattle and its eastern suburbs with Eastern Washington. It roughly follows the original route of the Seattle, Lake Shore and Eastern Railway that was purchased by Northern Pacific at the close of the 19th century and was completely inactive by the early 1980s.

The Issaquah-Preston Trail begins at a junction with the East Lake Sammamish Trail, about 0.2 mile north of the latter trail's Issaquah endpoint. Starting as a paved trail, the Issaquah-Preston Trail crosses East Lake Sammamish Parkway at a crosswalk and traffic light and then proceeds uphill, where its role as a commuter and recreation route is evident. To reach Preston, you'll follow the left fork at a trail junction and enter a short tunnel; the right fork ascends to homes, stores, and offices in the Issaquah Highlands development.

Another trail junction confronts visitors after the tunnel. The left branch proceeds to Preston, while the right heads downhill to historic downtown Issaquah. The paved surface ends after the second trail fork, and the subsequent packed dirt and gravel trail can be uneven and muddy at times. It becomes a wide forest path canopied by second-growth Douglas firs and western red cedars as it passes through a section of Grand Ridge Park while noisy Interstate 90 traffic rolls past downhill. Nearly 10 miles of popular mountain biking trails in the 1,300-acre forest can be reached from the Coal Mine and Grand Ridge trailheads (maps are displayed on posts) in this section.

Passing through the forest, the path crosses a classic wooden bridge over East Fork Issaquah Creek and emerges at a small parking lot on SE High Point Way. Across this road, the trail continues as a gravel path sandwiched between Issaquah Creek and I-90. It is screened from the freeway by landscaping in places, and visitors can glimpse some farm lots to the north.

The Issaquah-Preston Trail ends as it crosses another wooden bridge and arrives at a two-way cycle track on the wide shoulder of SE High Point Way. The historic mill and railroad town of Preston—with restrooms, a market, a sports park, and the Preston-Snoqualmie Trail—is located about a mile to the east along the marked bike route.

To reach the Issaquah trailhead, take I-90 to Exit 17. Head south on Front Street N, and turn right onto NW Gilman Boulevard. In 0.3 mile, turn right onto an unnamed narrow street between the East Lake Sammamish Trail and a red caboose. You can park adjacent to the Issaquah-Preston Trail 0.2 mile ahead, on the street.

There is one short switch-back, and one short steep section but otherwise very doable for anyone.

My wife and I went for a bike ride on this trail for the first time it’s a decent steady climb uphill so when you reach the end of the trail it’s a pretty quick ride back down! My biggest complaint is that it runs next to the highway the entire way. It makes it harder to hear each other if you want to have a conversation :/ probably won’t do it again but the fun part is on the way back!

It’s great for beginners, children, of if you’re looking to gently ease back into mountain biking. This trail has a paved entrance (less than .2 miles or so) and quickly turns into gravel. It’s a well maintained wide/doubletrack trail. I went around 5pm, and although the parking lot was pretty full, the trail wasn’t super crowded or busy.

Nice paved trail and easy for my kids 10 and 12. from soccer park was light downhill most of way. a transition down then up fairly steep grade to cross highway midpoint in journey then nice trail. return was pretty much constant up but a nice grade and both kids able to navigate it. good but could hear highway traffic almost 90% of the trail and several areas are backyards so it's not a day in nature w/o civilization which is what we were hopeful to find. a few walkers but mostly had the trail to ourselves. well maintained.

Excellent for short hike(2-4 hours). I usually start hiking from issaquah. This trail is parallel to the highway, so it is a little bit noisey, but it's ok, actually it distracts that strange noises from trees espically when you hike alone, you know ha ha. It's a good idea to bring a bottle of water with you.