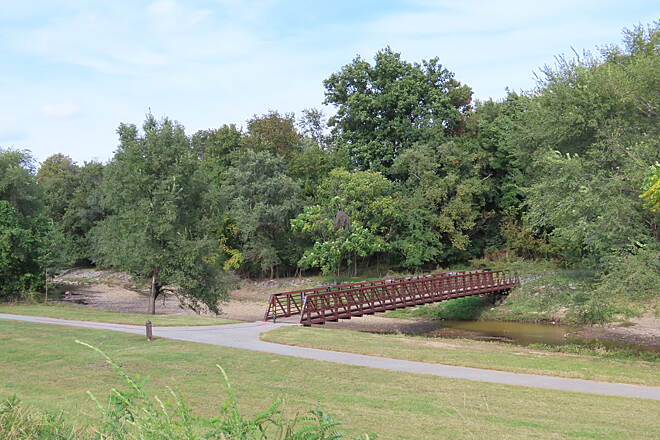 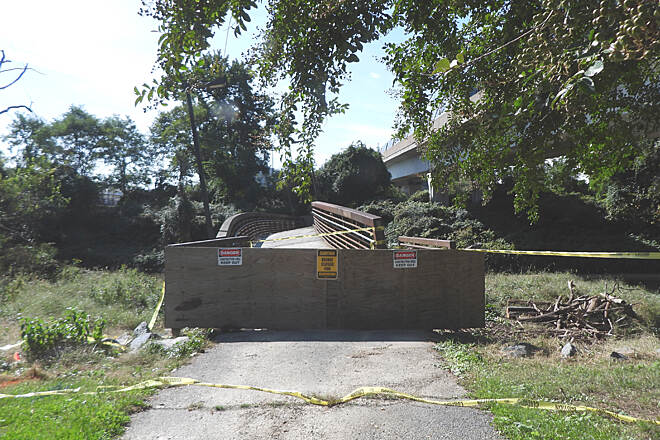 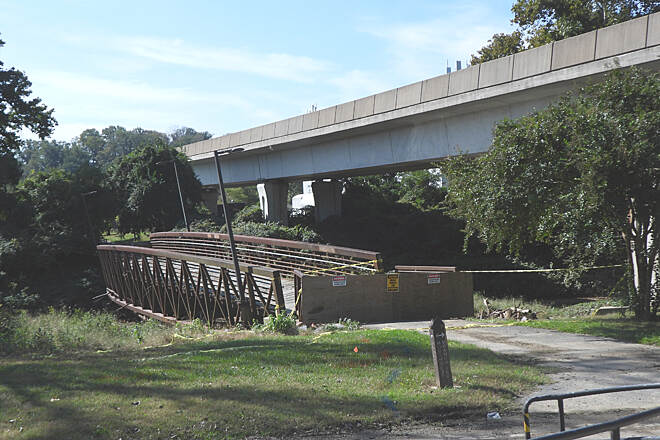 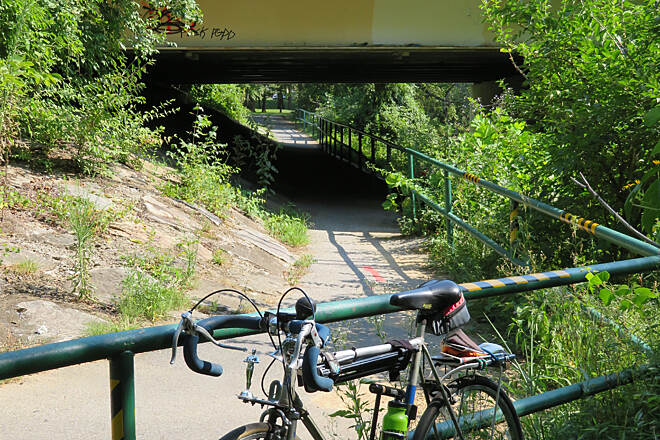 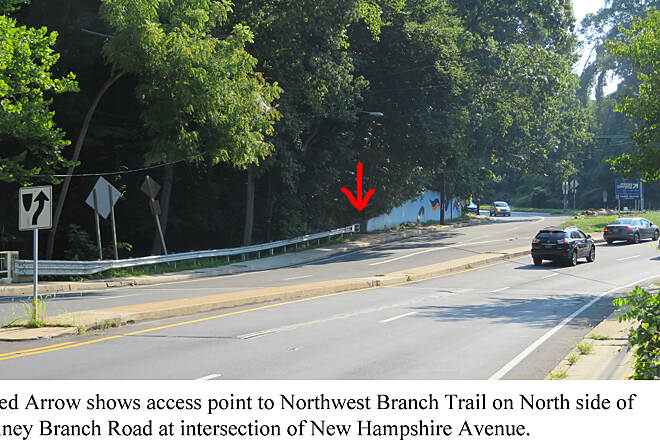 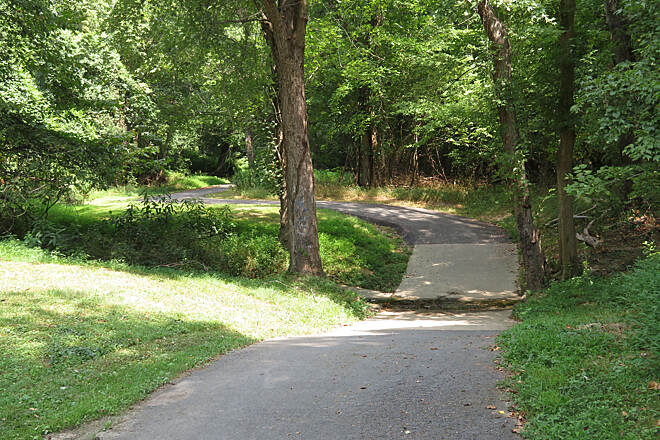 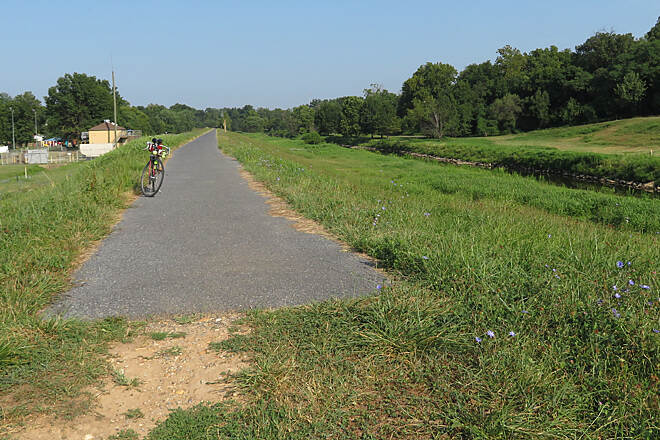 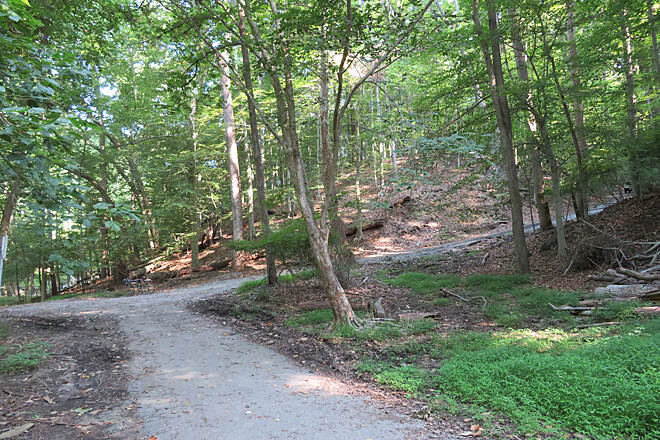 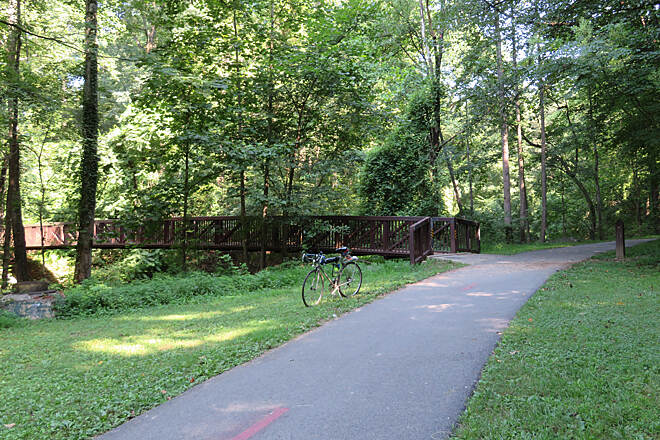 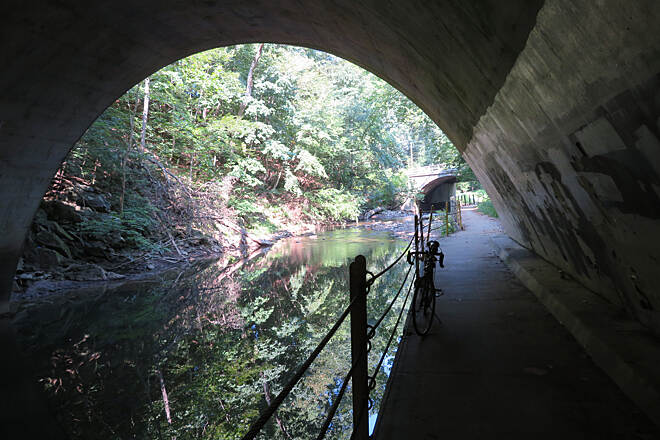 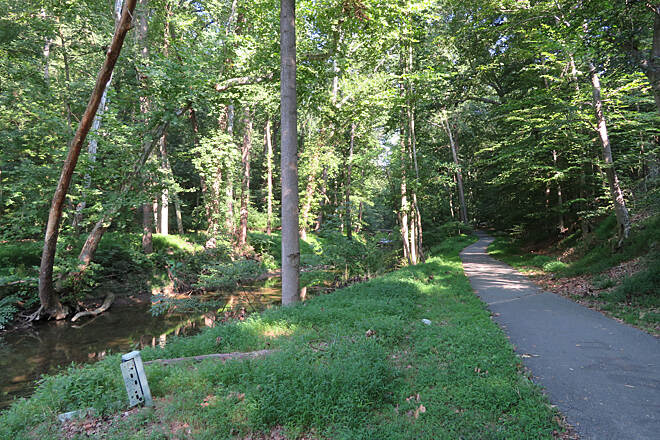 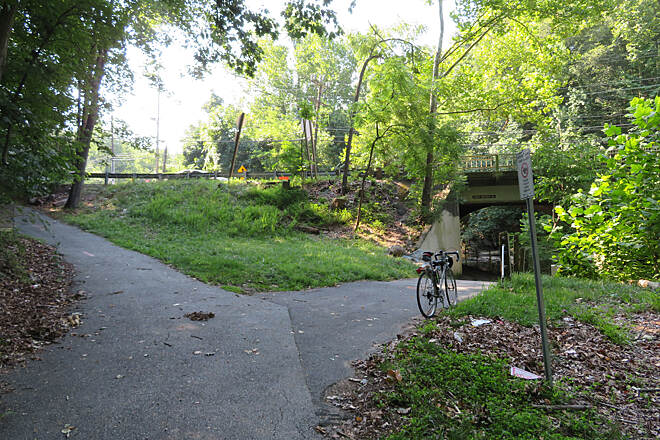 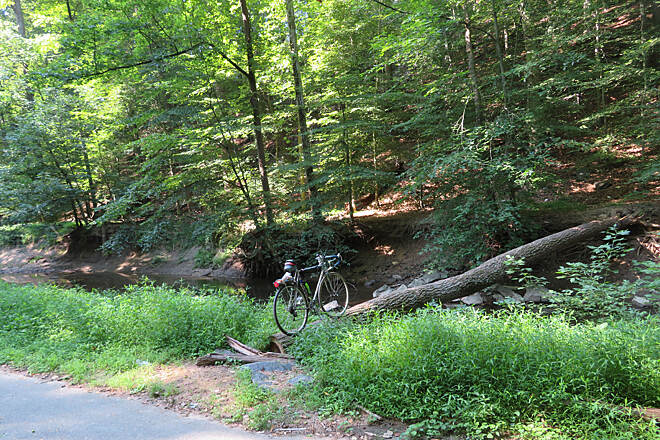 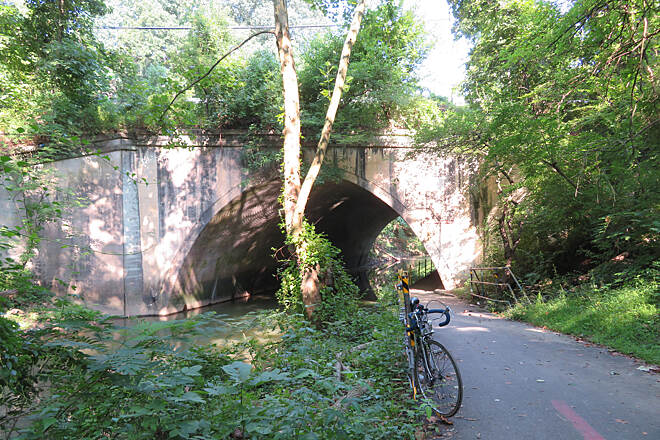 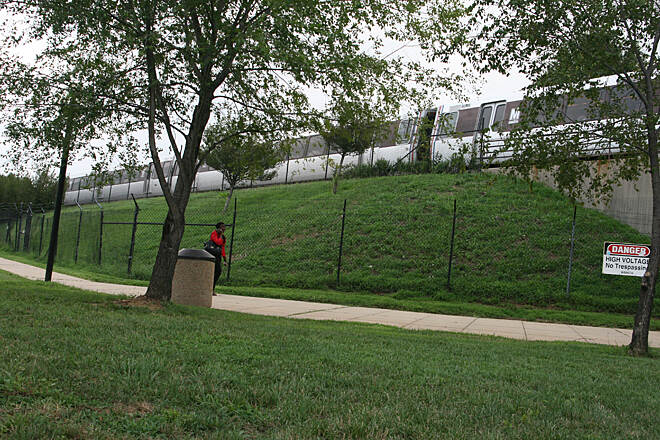 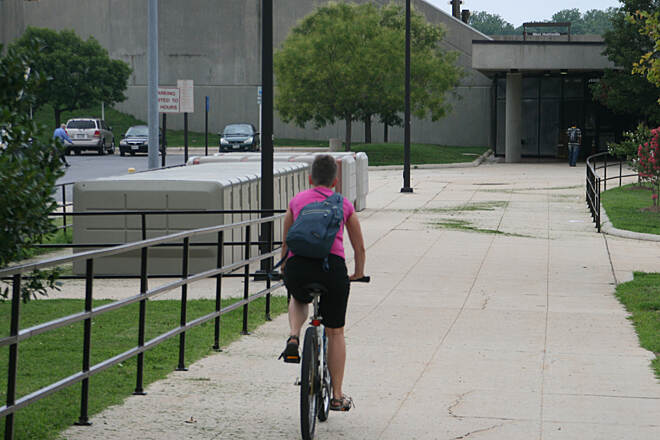 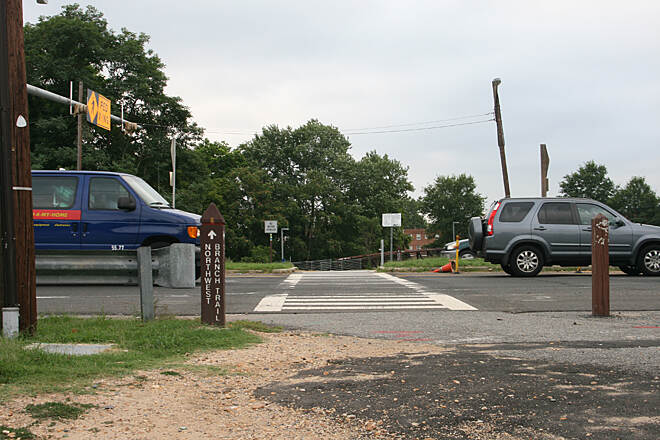 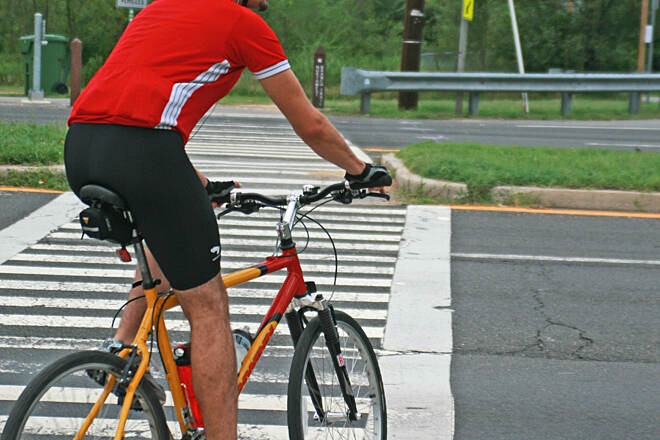 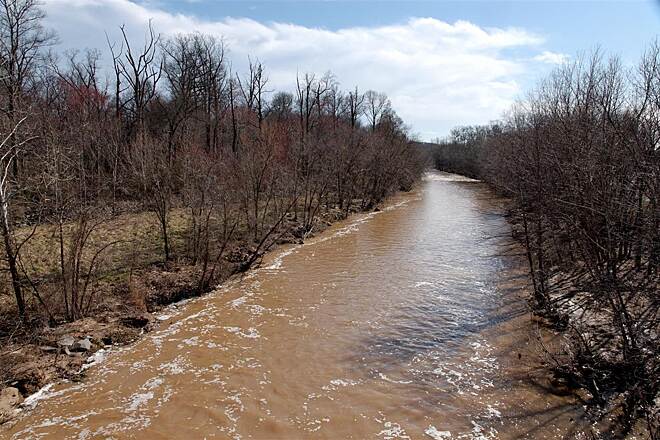 The Northwest Branch Trail travels a sylvan setting through a string of parks in the Maryland suburbs northeast of Washington, D.C. The 15.8-mile greenway connects the commercial-residential centers of Hyattsville and Wheaton on a trail that’s paved for 7 miles through Prince George’s County and then mostly soft-surfaced in Montgomery County.

It’s part of the 40-mile  Anacostia Tributary Trail System, which begins in Hyattsville where the tidal main stem of the Anacostia River splits into the Northwest and Northeast Branches. The trail system is bordered by stream-valley parkland acquired by the Maryland–National Capital Park and Planning Commission beginning in the 1930s.

The Northwest Branch Trail begins in Hyattsville, where it joins the Northeast Branch Trail and the Anacostia River Trail. It also hosts the cross-country American Discovery Trail and is part of the 3,000-mile East Coast Greenway—a growing network of multiuse trails connecting 15 states and 450 cities and towns between Maine and Florida—for its first 2 miles through Prince George’s County, until the greenway network splits off toward the District of Columbia at Chillum Community Park. That’s just after the Northwest Branch Trail passes a junction to the West Hyattsville Metro Station at 1.8 miles, and before the fork to Sligo Creek Trail at 2.2 miles.

Although the trail follows parkland for its entire distance, there’s scarce tree cover at the beginning. A thicker tree canopy emerges around Heurich Park at mile 3, and the trail becomes very woodsy after a power line corridor at about 4.5 miles.

A notable historical site is the Adelphi Mill at mile 5, just past Riggs Road. Built in 1796, the gristmill was served by boats using the tributary in the early 19th century. It was restored in the 1950s and is now a meeting place, open by reservation only.

The trail’s character changes about a mile after crossing into Montgomery County at New Hampshire Avenue/MD 650. The pavement ends just shy of the Capital Beltway (a utility access road connects to Oakview Drive) and the path continues as a dirt trail northward along the Northwest Branch for 8.5 miles to Alderton Road in Wheaton.

Mountain bikes are recommended on the narrow dirt trail. At Burnt Mills East Special Park on Columbia Pike, a junction puts mountain bikers on the Copperhead Run Trail, which follows a snaky, singletrack course along the hillside overlooking the creek.

Across Columbia Pike, at Burnt Mills West Special Park, the North-west Branch Trail passes a dam used by an 18th-century gristmill. The Rachel Carson Greenway Trail—named for the noted conservationist who lived nearby as she wrote Silent Spring—runs through the woods across the creek and is reserved for hikers and equestrians only.

In 3.8 miles, the Northwest Branch Trail comes to an access trail for Wheaton Regional Park at Kemp Mill Road. The trail takes a right turn, following an on-road route for 0.4 mile. The off-road trail resumes on the north side of Randolph Road and winds through the woods for another 3 miles to its endpoint on Alderton Road.

Parking for the Northwest Branch Trail can be found at the trail's northern endpoint at Roscoe Nix Elementary School on Hedin Drive in Silver Spring. Most of the parks along the trail's route have their own parking lots; for the exact locations of these parks, refer to the TrailLink map.

NOT a bike trail throughout

Starting at the south end, it's really quite a nice ride -- a paved surface in fairly reasonable shape, well-marked with a red centerline to help you find your way, winding through a mix of suburban and wooded areas as you make your way upstream.

But between NH Ave and the Beltway the paving ends quite suddenly. Despite the markings on the map, the paving does NOT pick back up again. If you have a pretty serious mountain bike with aggressive tires -- and an interest in wearing yourself out -- you might be able to keep going.

The map says this is a 7 mile trip. That may well be the case for the pavement, but the map then shows the trail goes on up to Wheaton and Layhill. The written description notes it's closed to bikes, but the map seems to suggest otherwise.

Maybe this trail should be broken into two parts to avoid confusion for folks like me! The hiking part is pretty rugged but quite beautiful . . .

Nice ride through the woods at the end

Miles 0 - 4.5 are meh in my opinion. You pass some neighborhoods along the way and a few small parks and have to cross a couple of busy roads. Personally, I really enjoyed the ride through the woods along the NW Branch Anacostia River starting at about mile 4.5 (Adelphi Manor Park) which made the ride worth it for me. The paved trail kind of abruptly ends at mile 7.

I would recommend not going past mile 6 as the trail conditions deteriorate pretty badly after that. You aren't really missing anything between miles 6 and 7 besides a really bumpy ride. I can see how another reviewer thought the woods were a bit eerie, but I thought it was a nice surprise when I reached that point particularly enjoying the river view.

On a side note, around the start of the trail there is a bakery right when you cross Rhode Island Avenue that's pretty highly rated if you want a quick pitstop.

I rode this on a sunny day in October. The trail is pretty well maintained, but some tree roots in a few areas. It was kind of eerie that I had to ride through wooded areas and never saw another biker. Didn't feel safe riding the trail alone.

Nice butincomplete at the Northern end.

I rode the NW Branch Trail along with the Sligo Creek Trail. What is lacking is a safe connector between the two. Piney Branch Road has an alleged bike lane full of debris and cars are oblivious to bikes. The steep grade is almost unrideable. Tehre is a solution, a trail is needed between the Piney Branch underpass and the Montgomery Knolls Elementary School. Streets over the ridge to Sligo Creek would complete the loop. Uphill on one leg, downhill on the other. Add in a section to Lake Artemesia (parking and rest rooms) along the Northeast Branch Trail makes for a very pleasant outing.

A nice 22 mile loop. Starting from Magruder Park in Hyattsville (3911 Hamilton Street for you Wazers) ride out the end of the park to the NW Branch Trail and turn right, heading along the canal portion. Pay attention to signage and folllow the main asphalt path, not much traffic at all down here, but you have to pay attention, trail crosses canal and changes direction a couple times, easy to follow mostly. When you reach a road, stop and look for the continuation of the trail to the right left, or straight across. Trail does cross several roads, and even dumps you on to to a sidestreet once but the sign tells you to bear left and continue.

Eventually you will see a MARKER FOR SLIGO CREEK TRAIL on the left, across a bridge. Cross this bridge and follow Sligo Creek Trail for 8 miles or so, crossing bridges, roads, and passing more peds than anywhere else on the loop. Many cool neighborhoods in this area of the ride, great architecture and mild climbing along the stream. Best pic taking here.

We continued past Piney Branch Road and kept going but that will be important soon. Follow Sligo Creek Trail under 495 and continue. Finished up on the boardwalk section, continuing until trail T's/ends. We turned around at this point, around 10.5 miles done so far from Magruder Park. Rode back to Piney Branch Rd., crossed and then left ON Piney Branch Rd. up the big hill. We rode on the sidewalk because of speeding cars, not much pedestrian traffic at all. Continue on Piney Branch Rd. for maybe five minutes, up and down some hills, in a built-up area.

Cross University Blvd. go down a steep hill and as you come back up, you will cross the stream on a bridge. Look down and the NW Branch Trail is below you. Cross the street to the left at the bridge (before the light at NH Ave). to access the steep asphalt connector trail down to the NW Branch Trail, turn LEFT, and head back thru a beautiful wooded section of the trail with the stream on the right. The least travelled and most beautiful section.

Continue on the NW Branch Trail, crossing tributary drainage culverts (wet!) This part of the trail is really nice, eventually passing Adelphi Mill and some open parks. Eventually you will reach the Sligo Creek intersection/sign/bridge you took earlier but stay straight on the NW Branch Trail back to Magruder Park. Note-easy to miss the marker for Magruder-marker on right, connector trail goes left back to park.

If you reach the skate park, turn around and go back to the marker on the left, turn right on the connector trail back to the park. We did this anyway to gain another mile or so, reaping 22 miles total, took about 1:50 at a 12.2 mph avg. on mtn. bikes. A very nice ride, especially early on a weekend morning. Enjoy and Happy Trails!