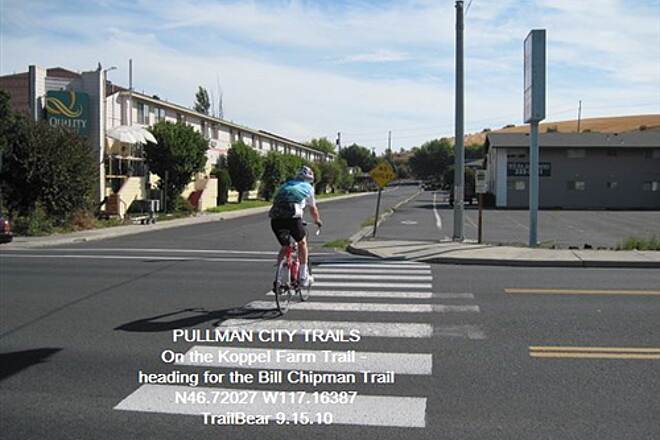 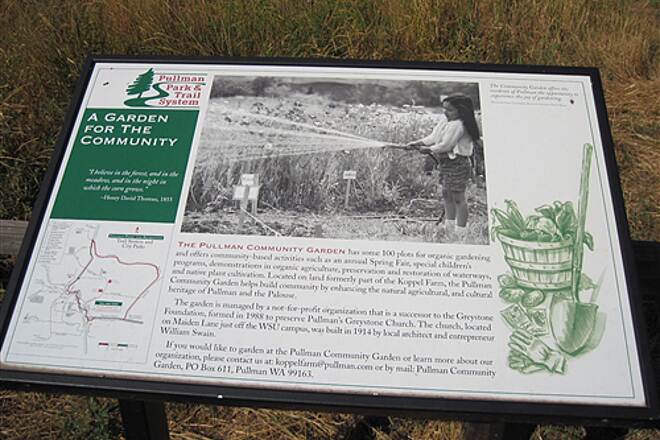 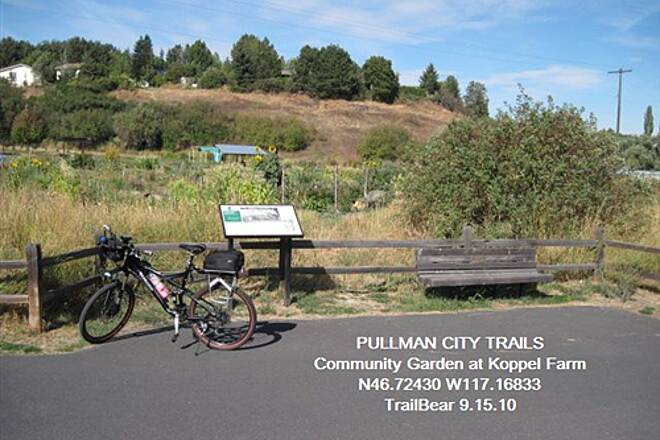 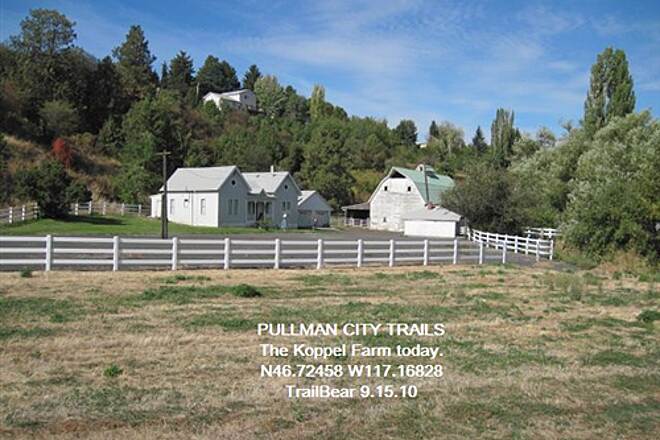 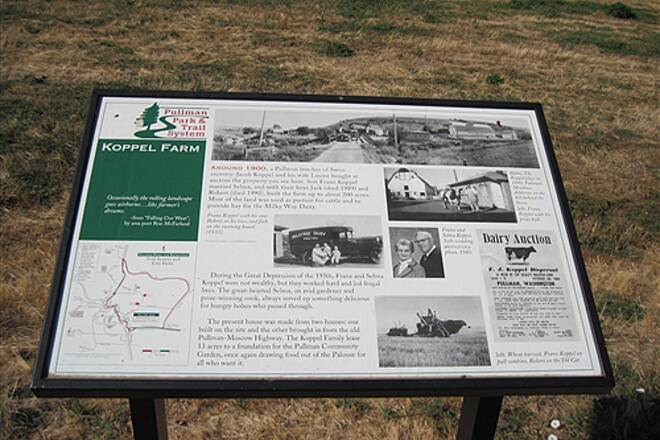 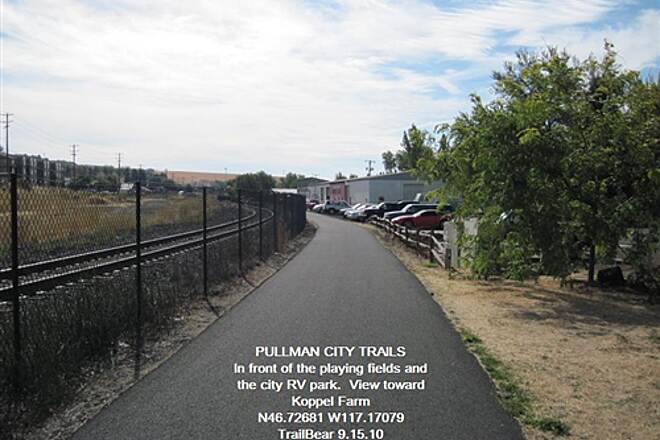 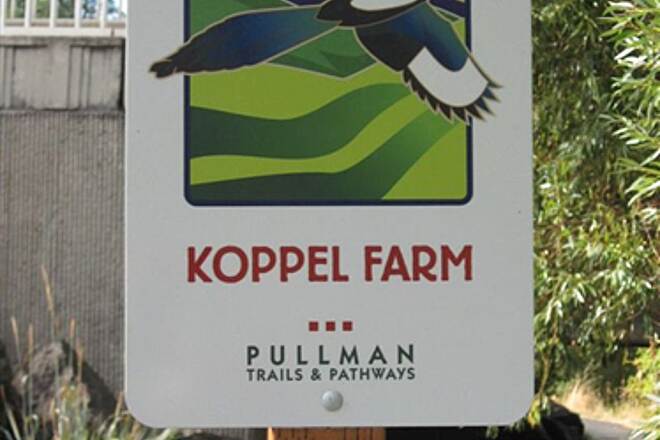 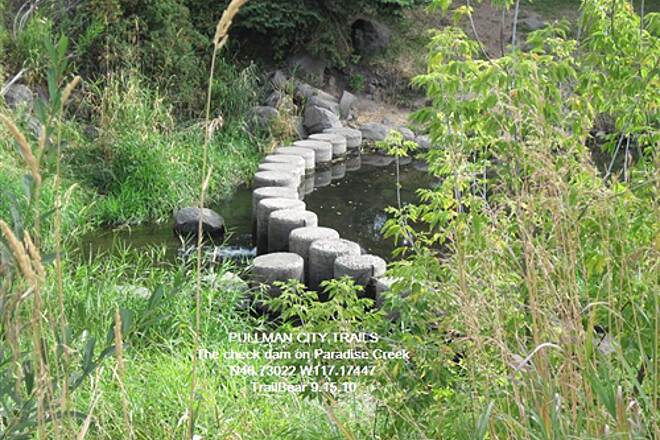 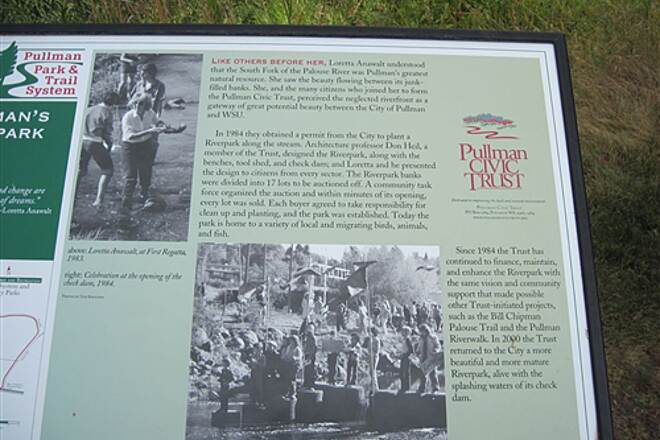 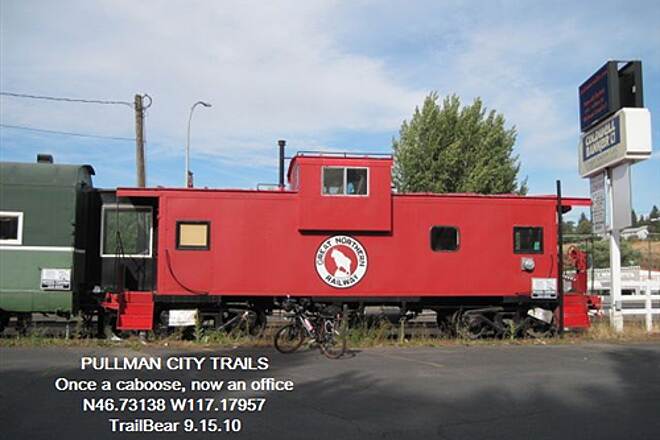 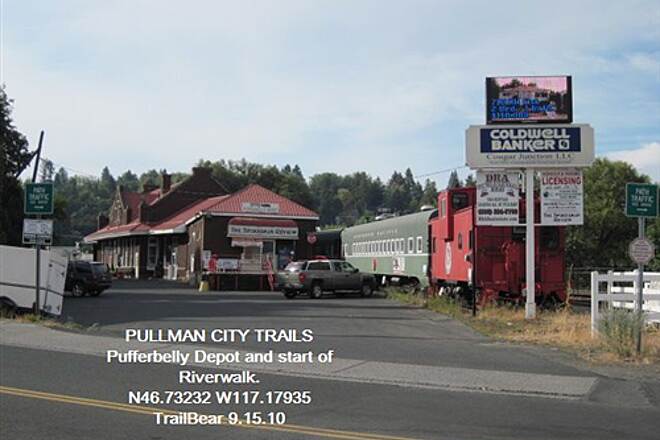 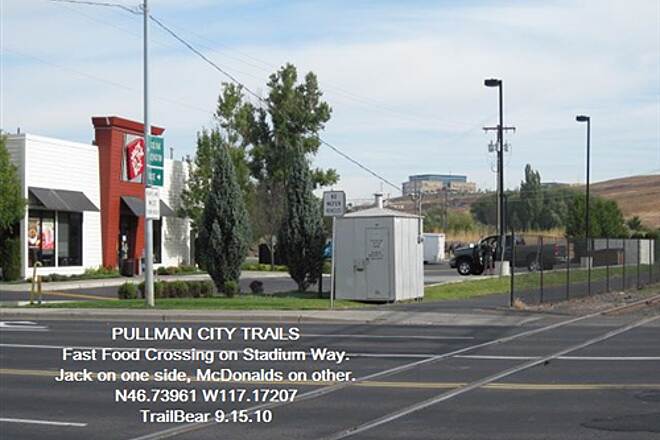 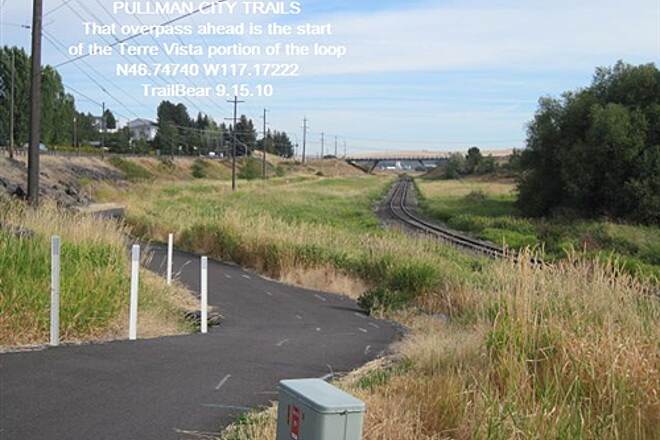 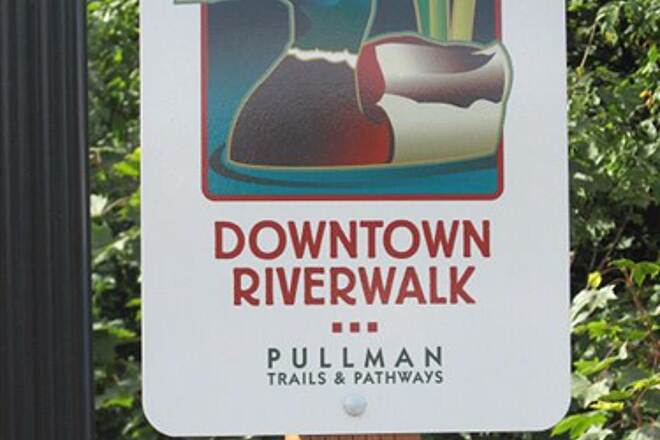 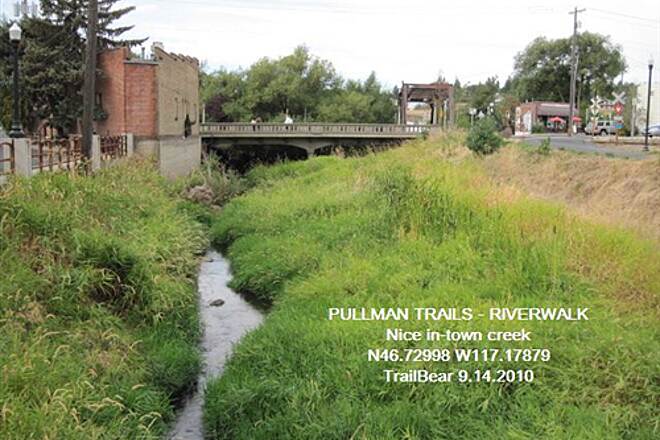 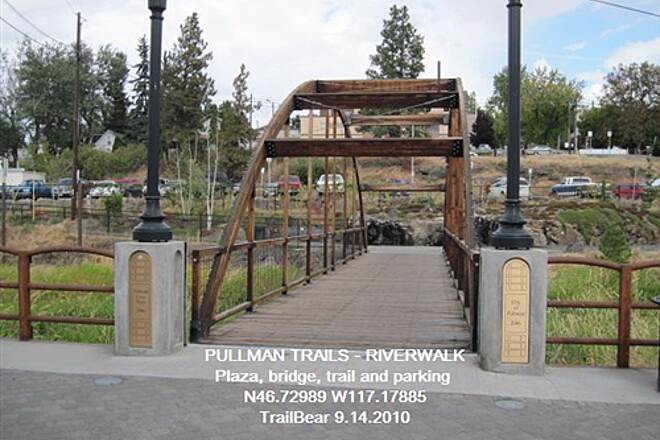 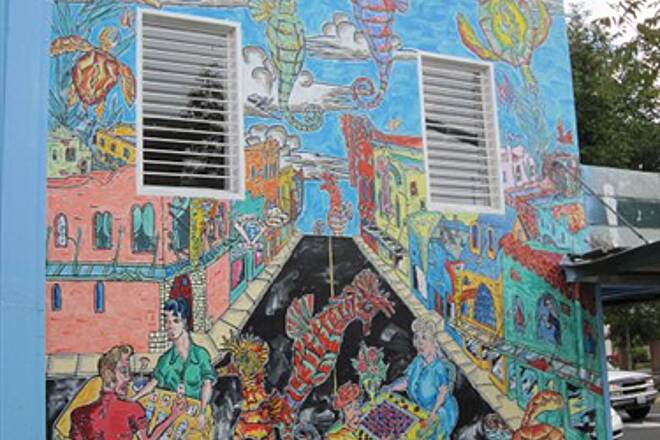 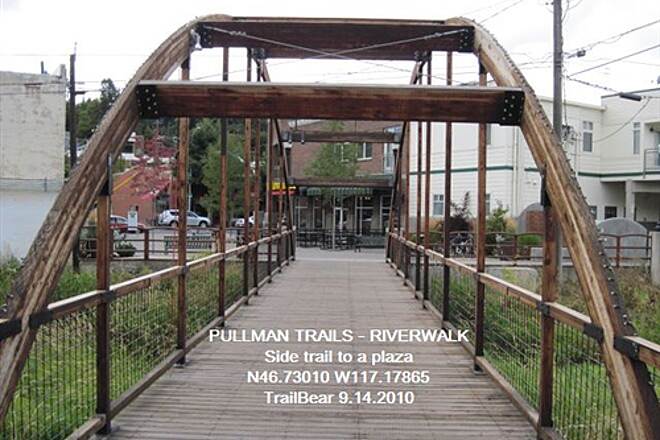 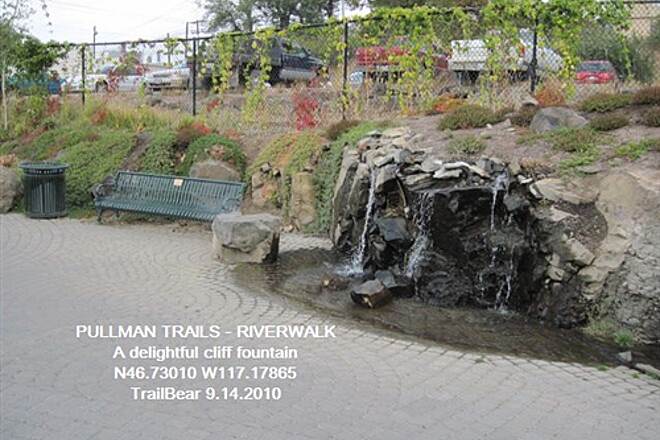 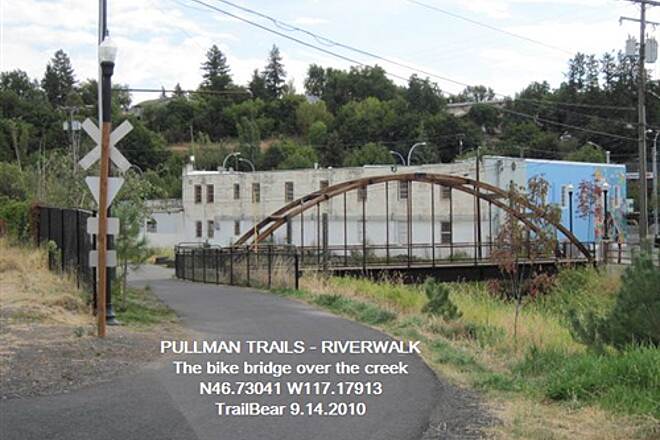 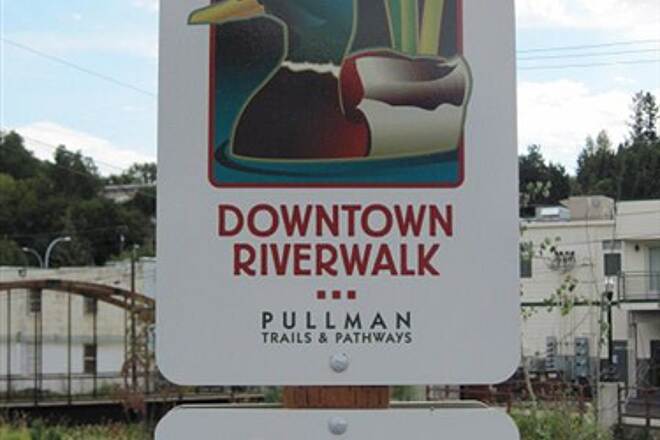 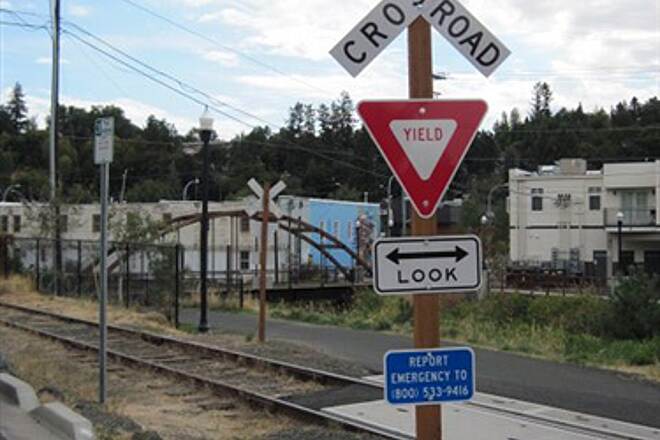 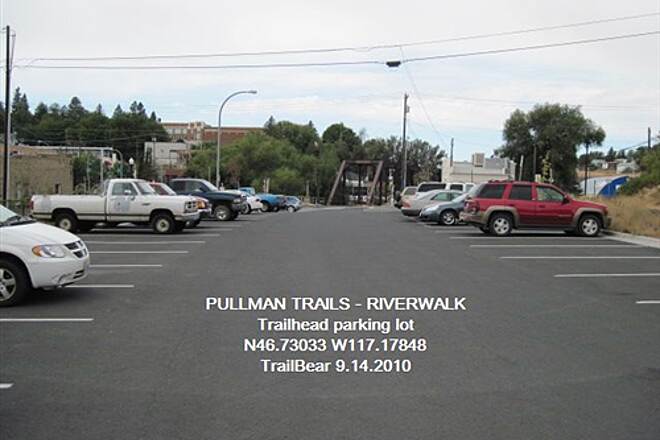 Pullman's Downtown Riverwalk trail is part of system of trails that make a loop around the city. The Riverwalk runs for a short distance through downtown, linking with the College Hill Climb Trail on the north end and the Koppel Farm Trail on the south end. Sign posts guide you along the trail system.

Park at City Playfield Park (820 Southeast South Street) or at the parking lot on the southeast corner of Kamiaken Street and Palouse Street.

TRAILBEAR UPON THE PALOUSE – Riverwalk and the Pullman City Trails

TRAILBEAR UPON THE PALOUSE – Riverwalk and the Pullman City Trails

TrailBear’s fall trail survey has left Lewiston and Clarkston and reached that vast region of fertile loess dunes in Washington called the Palouse.

Think: a zillion acres of rolling hills covered in wheat. Think: hay fever on a cosmic scale. TB was wheezing, sneezing and popping pills. And this in autumn. Spring must be fun.

Are there any good bike trails in the Palouse?

Sure are. Pullman, WA and Moscow, ID are homes for two land grant colleges and both have trails.

The two towns are connected by the delightful Bill Chipman Trail. Pullman has an eight mile loop trail around WSU (“Wah Zoo”, i.e., “Go Cougars!”) atop College Hill. Moscow has an 11 mile trail out to Troy – the Latah Trail. Connect the dots with the Paradise Path in Moscow, which connects the Bill Chipman and Latah Trails, and you can get a nice +20 mile ride from Pullman to Troy, all on good quality asphalt.

The Pullman loop trail is divided into seven named segments and each has an individual symbol for its trail signs. This means the Pullman trail signs are some of the most attractive you will see on a trail. TB has not seen better. Take a look.

TrailBear left the Terre View and Arbor Link trails for roadies in search of some climbing. These trails are wide bike/walks along the roads along the boundary of WSU. He started at the top of the Grand Ave. Greenway and headed down to the Downtown Riverwalk, the Playfield, and Koppel Farm trails (all part of the same loop) and onto the Bill Chipman Trail. But, back to the Riverwalk.

The little Downtown Riverwalk trail has the most going on. It starts up at the old depot, now the Pufferbelly Depot (converted into retail space) and follows South Fork of the Palouse River for a third of a miile before becoming the Koppel Farm trail at the E. Main St. underpass. It's more a sauntering than riding trail. You can hardly get up to speed - but there are miles of trails on each end, so hang in there.

The easy way is to park in the public lot (free) below the WSU steam plant at NE Riverside St. x NE College St. and go up the trail. There are two portapotties in the lot. Handy. This is one end of the Rivewalk. Look across the street to the embankment (Rt 270) and the skate park (another restroom there).

The trail ducks under the embankment, changes names and continues out to the Koppel Farm and the Bill Chipman Trailhead by way of the city playfields and a handy city trailer park just across the street from the trail. It’s not a very flossy trailer park, but it is right on the trail. Bet it fills for all the Cougar home games.

You go the other way, to the sign posts at Lentil St. at the corner of the lot, then across the old bridge to pick up the trail there. Take a look at the Civic Trust sign and the interesting check dam in the creek below. Then over a new bike bridge to the tracks. The tracks are still active.

This is the neatest part of the trail. There is a bit of ledge along the trail which they have turned into a fountain. They put in a brick apron with drains at the bottom and ran water lines atop the ledge. The water splashes down over the rocks and into the drain. If you have a bit of ledge in the back yard, take a close look at this. TB was charmed.

The fountain is at one end of a wooden arch bridge over the “river” to a plaza in the old town. Take note of the mural and public spaces. Food and drink may be had. The old post office is now a brewery. Take a diversion over here and check out the scene.
From the fountain you hit uphill a bit and across Kaimaiken St. to the …

The old depot has been repurposed into retail space. Those rail cars are offices and shops. There is a Coldwell Banker in there, among other businesses. From the boardwalk there are views of the active railroad and bridge (library is on the opposite shore). They may call it Riverwalk and it may officially be the South Fork of the Palouse River, but TB thinks that it really is a lush prairie creek. Take a look and decide.

At the upper end of the depot, the Riverwalk ends. It was short but sweet. However, you can continue riding on. It fact, you can ride around WSC for about 7 miles and wind up back where you parked, should you desire. If you continue on up the valley, you are now on the Grand Ave. Greenway, which is a nice ride. TB took it up to the start of the Terre View Trail, then back down to hit Riverwalk, Koppel Farm Trail and then the Bill Chipman and out onto the Palouse.

TrailBear
Pedaling upon the Palouse