Looking for the best Inline Skating trails around North Dakota? 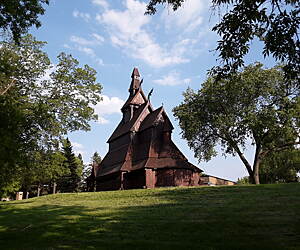 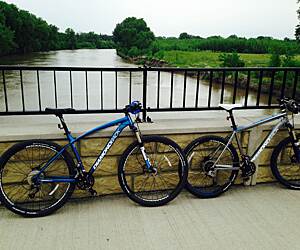 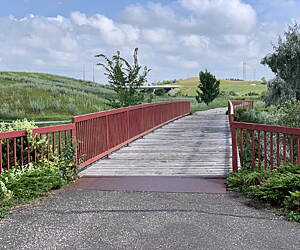 Good as it gets

The section of trail along the Red River is as good as an urban trail can be. All smooth and very safe. The downtown loop is about 10 miles and gets a little confusing where the Red River meets the Red Lake River. The bikeway map on the city website is a lot better than the map on the Greenway website.
If you are staying at one of the hotels near the Alerus Center just take the trails south and east to the south end of the river trail, would be about 25 miles round trip including the river trail.

This is a remote area and trail is not used much. I saw one track made since the last rain. Bridge is fine to ride over with a little jump at the west end. I never imagined a lift bridge in this area.
The tunnel curves and after a 100 yards the entrance is no longer visible, so it is totally dark. I was alone, and even with a good headlight I got spooked and turned around. I spoke with a local fisherman who said the tunnel was open all the way.
The adjacent park isn't maintained very well, but looks safe.

The only desgnated parking area was small and full. Thankfully it was a Friday in August, so we were able to park at the Shiloh Christian School next door.

We didn't see any signs for the "Hay Creek Trail", but using the TrailLink map we headed out on our Trikkes.

The first part was a wide sidewalk by a road, later becoming a narrow sidewalk. There is a turn into a residential neighborhood that is not marked, while a sign saying "Bike Route" along a wide sidewalk went in another direction.

Eventually, the trail joined some off-road paths, near a golf course, but again the lack of signs made it confusing about which direction to take. Using TralLink and Google satellite views, we were able to choose a way to go which got us back to our vehicle.

There are several places where there are signs posted that show all the trails in the region, but the individual paths do not have any signage at any point. Also, there is also no way to tell if the various trails/paths are paved or not.

It seems that Bismarck has spent a good deal of time and money on recreation trails and paths, but has not utilized TrailLink to promote or inform potential users of the trails. Adding more signage to the various trails would be very helpful.

My wife and I had to address business in Grand Forks and brought our bicycles with us. We rode this trail and found it absolutely wonderful. The paved trail hugs the Red River and the boarder of Minnesota and North Dakota. The trail is asphalt and in great condition. Many rest areas and tool/air stations. There are many bridges that you can get to East Grand Forks Minnesota and back to Grand Forks North Dakota. The trail offers a ton of food and drink stops as most of the establishment are a short hop off the trail. The trail is also a multi use trail and offers great opportunity for a urban connector trail and way to get around Grand Forks.

Love the Grand Forks Greenway. The Wife and I have spent many hours riding the greenway. People are always friendly and many great places to stop and enjoy the fresh air. The greenway also connects to other bike paths that take you all around Grand Forks and the University. We would ride from our home but there are many places to park and start with many access points to get on the trail. Only downside is winter is long and I am not brave enough to ride in -30. Some people are though.

Recently moved away and we miss the bike paths. We loved how you dont have to cross any major roads. It is very well kept and we always felt very safe riding. We talk often about how much we miss Grand forks and the Greenway is a big part of that.

This is a uniquely wonderful trail set in the flood plain of the Red River. Instead of a narrow corridor of a rails to trails type path this occupies a wide swath of the river bottoms with a large dyke on the upland side of the path blocking views of town & residential neighborhoods. It's like riding through a lush and beautiful arboretum. The pathways are in excellent shape and mostly deserted in the fall mornings, giving one the feeling of being far far away from civilization.
The town of Grand forks is small and tidy with all the amenities one could want without the traffic congestion & noise of a larger city. I would highly recommend this trail for a bicycle vacation destination.

Luck would have that Handicap parking is at Trail grade at the west end. Otherwise it is a steep though short climb from the park below. The trail surface across the ties is a steel reinforcement web making a smooth ride. However at the east end the dirt has washed away and the web is not bent down over the side of the RR tie. This cut the side wall of my tire. Luck again, it did not blow out until an hour later after loaded it back in my Van. If the web reinforcement was hammered down, it would cure this hazard. Noel Keller 21 Jun 2013

If this trail had some clay and crushed limestone rolled & packed it would be an excellent trail. The Sign at the North end of the Trail by Minot AFB Commercial Gate states, This is an unimproved trail. Surface is soft or has large ballast, not suitable for a 3 wheel cycle.
Noel Keller 18 Oct 2011

Over and Under Bridges on the Red River

This Trail System takes one under or over and by bridges on the Red River. Trail is in fine condition. Excellent new bike Pedestrian Bridge. Noel Keller 17 Oct 2011

There is a movement by Senator Kent Conrad and the Corps of Engineers to construct a trail through this area.

"The Roughrider Trail, as near as I can tell, from Fort Abraham Lincoln State Park south to Fort Rice, exists only in the realm of what can be rather than what is. The rail bed is disconnected as the bridges are all gone, and unless you enjoy riding over a series of overgrown burms and decayed bridge banks, biking is out of the question. It is not encouraged here and according to the ranger--she was miffed that anyone had even heard of this railbed before--even the snowmobilers prefer to ride the ditches in front of it. This is a shame because if this trail were ever developed, at least to the point of supporting biking, it would provide a stupendous, historical ride along the upper reaches of the Missouri.A better ride, which the same ranger suggested and we followed, was along a connecting bike route from the state park north to Mandan then across the river to Bismark. This is 12 miles one way and takes you into a series of the waterfront trails in Bismark where you can witness scores of roudy youth buzzing pontoon boats with their noisy skidoos."