Looking for the best Mountain Biking trails around South Dakota? 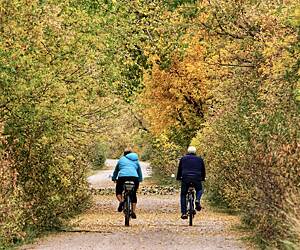 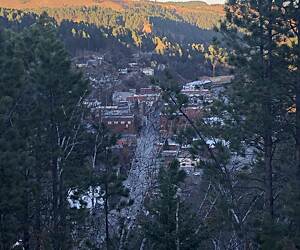 In late September of '21, my wife and I experienced the joy of this awesome, five-star urban trail on a weekday morning. Even though it's completely within the Sioux Falls city limits, you'd hardly know it except for the occasional sounds from distant autos, the even more occasional sounds from the airport flight path, and the beautiful buildings you glimpse as you pass through an exceptionally quiet downtown. For the most part you're enveloped within the serenity of trees, parks and greenways, surrounded by wide open spaces and golf courses, or hearing the thunderous noise of the falls at Falls Park.
Even though it's called Sioux Fall Bike Trails, we stuck to one trail: the twenty mile loop that follows the two forks of the Big Sioux River and essentially encircles much of the city. We started our ride at Farm Field Park, a popular starting point for the many walkers and joggers utilizing the trails, and proceeded in a counterclockwise direction. Thank goodness for my investment in the Rails To Trails Link app! There were a couple of instances where we unsure which fork in the trail to take, and the app kept us on the right path!
With the exception of some rough patches of asphalt and two plus miles on a gravel road due to construction on the main loop trail out near the airport, most of the trail was excellent, wide, flat, and provided smooth riding.
WARNING: Besides the temporary construction detour, be aware of the steep climb just beyond the falls up the side of a dam. If not for my sixty-three year old wife's Swytch pedal assist, she would have been walking her bike up that steep grade. To avoid that, consider taking the loop in a clockwise direction.
All in all, the trail lived up to it's five star billing and was worth the 2,000 mile drive from SoCal to check off another state bike ride on our bucket list! We experienced the beautiful falls, sculptures, wildlife, architecture, arriving and departing jets, trestles, bridges, levees, zoo animals, river views, trees, and the super friendly walkers, joggers, and bike riders of Sioux Falls.
( By the way, so many previous reviewers were rough on the part that goes around the airport, but it was especially quiet, peaceful, and serene out there except for the infrequent jet landing or taking off. I enjoyed the views from the levees and solitude away from the town as much as riding within it.)

We were Mickelson Trail newbies and planned our trip based on reviews we read here. We did the 108 miles from Deadwood to Edgemont in 2 days the last week of September to experience the fall colors. It did not disappoint!! Gorgeous and trail excellent. We parked in Edgemont at the park and shuttled (Black Hills Discovery Tours. Great service. $158 2 people, 2 bikes) to Deadwood. Stayed at Cedarwood Inn (nice, clean, quiet, close to trail). Dinner at Jacob’s Brewery (nice ambiance, food ok). Breakfast next morning at Six Strings (not great). Headed down the trail (purchased pass at trailhead $8 cash per person), 16 miles gentle uphill, then mostly downhill to Hill City. Stayed at Quality Inn right on the trail and dinner at Alpine Inn (food pretty good and beer great after a long ride). Next morning off to Custer, stopped to check out Crazy Horse Monument (definitely worthwhile) then tackled the last stretch down to Edgemont. What I would do differently next time: bring a different bike!! Mountain bike (too heavy and not necessary), hubby was on a road bike with 28 tires which worked fine. There were soft spots on the trail but mostly hard pack with sand. Ideally a gravel grinder or ebike would be best. I would do it in 3 days. Park in Hill City, shuttle to Deadwood, ride Deadwood to Hill City first day. Make the second day easier with a ride to Custer. Third day ride Custer to Mt. Rushmore and back to Hill City. I would skip Custer to Edgemont. Although it’s mostly downhill, I felt I’d seen the best of the scenery and was really over it the last 37 miles from Pringle back to Edgemont.

We biked through the campgrounds at the Lewis & Clark Recreation Area, along the north shore of Lewis & Clark Lake. We find it fun to see how various folks "rough it" when camping. Seems like there were a thousand campsites and the trail had lots of activity. We extended the ride by riding all the way across Gavins Point Dam and back; there isnt much traffic on it. Although we didnt take the paved Highway 52 trail from the lake into Yankton, we highly recommend riding the paved trails around Riverfront Park in downtown Yankton, and then riding across both levels of the Meridian Bridge, a former RR/highway bridge across the Missouri River that has been modified for pedestrians. And while downtown, go north a few blocks and enjoy the fine large homes, and catch the Auld-Brokaw paved trail that follows Marne Creek from Tripp Park in the west to Burleigh St on the east end. This city knows how to keep bicyclists happy!

Best section of the trail: around Mystic

We're in our 60's and accustomed to flatland rail trails with road bikes. So we asked around the Black Hills and got recommendations for the best scenery and trail variety. The Mystic area seemed to be the universal response. So early one cool mid-July morning (after an overnight thunderstorm) we parked the car at Mystic trailhead and headed south toward Hill City, up a steady grade about 3 miles, mostly with good trail gravel pavement. The trail followed a high cliff, past old gold mine placer deposits, wandered through woods, then a tunnel. Great views of the Black Hills. Then back to the car for a snack, then we headed north 5 miles on the trail through some beautiful scenery, some cabin neighborhoods, numerous bridges across creeks, even near a small waterfall. We rode to where the trail crosses Mystic Road then back to the car. This was a great experience for us. We would do more miles there if we had more time. Please note that in the Mystic area there are no services or stores. Pack accordingly.

This is a paved trail on the west side of the Missouri River that connects Pierre and Fort Pierre with recreation areas at Oahe Dam. Overall it is a nice trail, but there are cracked pavement areas challenging for narrow tires. Across the river there is a trail that goes along the river to Farm Island State Park an additional 4 miles or so downriver. Pierre also has some trails near the State Capitol Building. Where there are not trails, there are neighborhood roads to ride.

what a great ride!

I rode the Mickelson trail in mid August, while Custer’s and Hill City’s main streets were filled with motorcycles. The ride lived up to my expectations. It was well cared for and very scenic. The grades are a little steeper than other rail trails but that means you can actually coast on the downhills. Of all the trails I’ve ridden the Mickelson remains my favorite.

My husband and I rode the trail and loved it. Our favorite part was Hill City north to Deadwood. There are 4 tunnels and the scenery is beautiful. We had to dodge a few cows in the open range area. The trail was nicely marked and most rest stops had water and toilet. We were here in mid-September 2021, the weather was perfect and the crowds were nothing. It is dry, they need rain so is was dusty.

I am from MT and this trail system is fabulous. It is so well laid out. I found it easy for the beginner trail rider that I am. Other users were friendly and were easy to approach with my questions. Let’s all ride to fight Childhood Cancer this month!

We rode this on Saturday September 4th. This is a beautifully maintained trail throughout its circuit. We did run come across a minor detour by the airport, due to construction, but the rest of the trail was wonderful.
We saw lots of people using this trail. It is very welcoming and the people we met along the trail were friendly and informative to this couple from Oklahoma seeking information at the detour.
Sioux Falls should be proud of this trail and we highly recommend it.

This is a great trail for a quiet walk away from traffic noise.

As part of the loop around Lake Kampeska, this trail provides great views of the lake.

We road the trail today. We road by several parks, the zoo, golf courses and a prison. Nicely maintained trail w several bike repair stations w air and tools for public use.