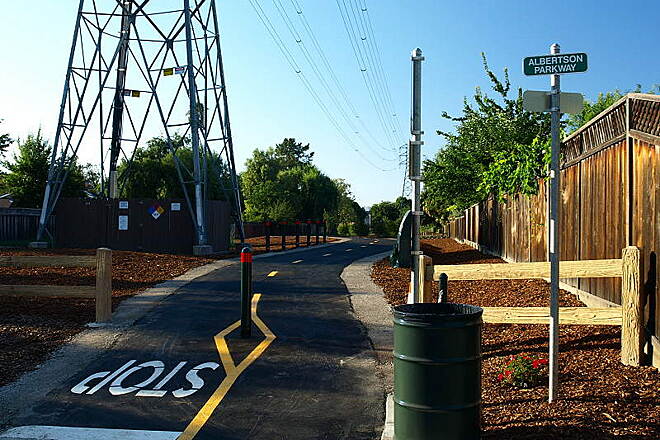 The Albertson Parkway is located in South San Jose, just steps away from the sprawling Santa Teresa County Park, which features preserved land and unpaved trails in the rolling Santa Teresa Hills. The short paved trail opened for use in 2009, replacing an unsightly path often filled with trash and graffiti.

The trail makes efficient use of open space, as overhead electric lines belonging to PG&E already occupied the corridor. Through negotiations between the City of San Jose and the electric utility, a successful agreement was reached to construct a much-improved trail while respecting the maintenance and safety needs of PG&E.

The winding pathway is named for Gary Albertson, who led efforts to improve safety in the Santa Teresa neighborhood before his untimely death in 1974. He would be pleased with the improved trail dedicated to his memory; the 0.5-mile trail is both beautifully landscaped and functional for residents of the community, as it runs behind dense housing tracts and ends in the north at the local elementary school.

Parking for the Albertson Parkway can be found at the Bernal-Gulnac-Joice Ranch Park on Manila Drive. From there, take the road east for a few blocks until you reach Manila Way. The trail begins directly across from the short road. Alternatively, park on any of the streets adjacent to the trail.