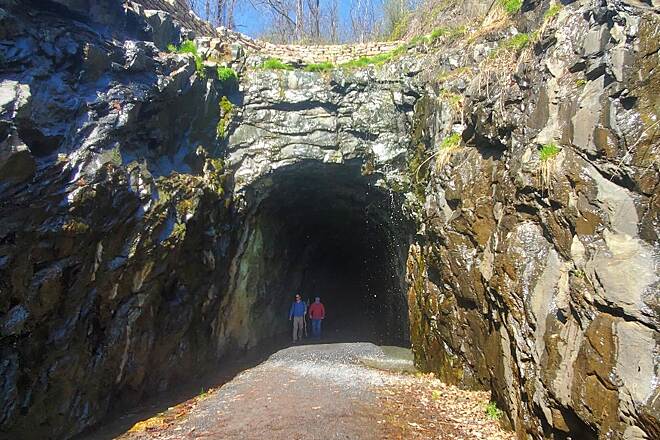 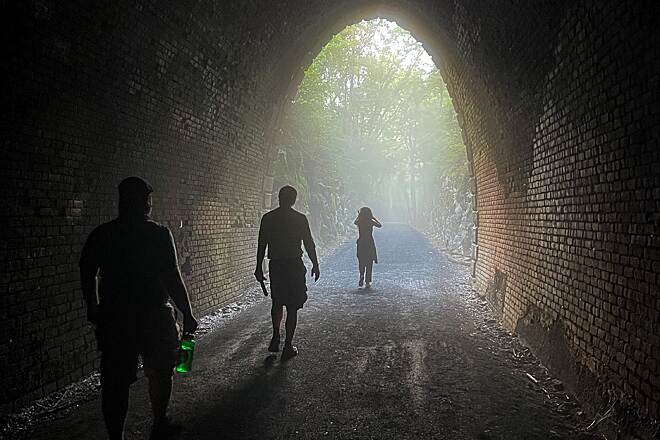 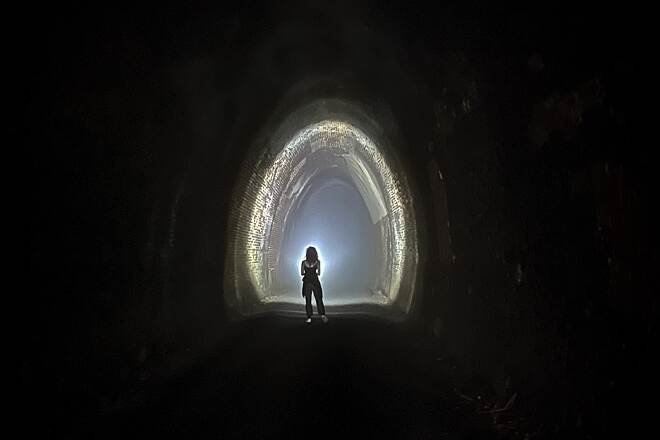 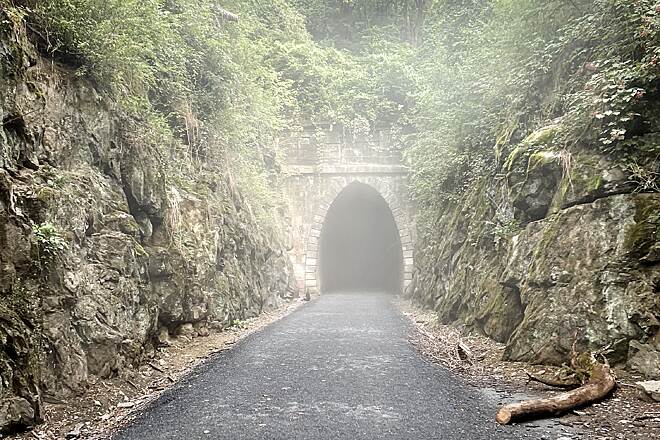 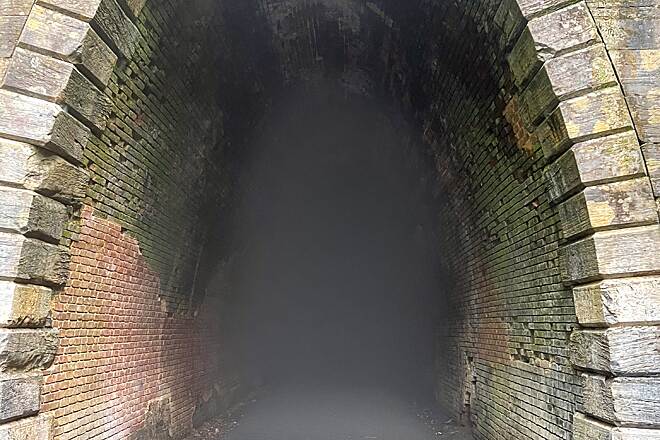 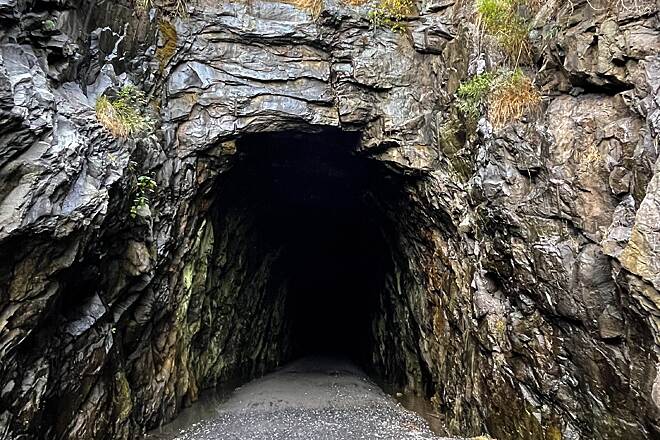 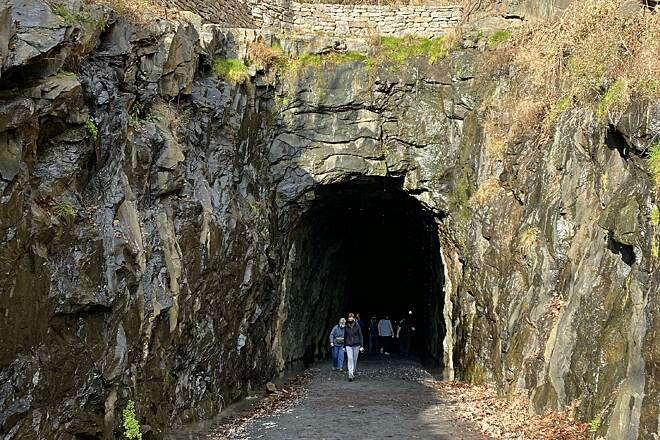 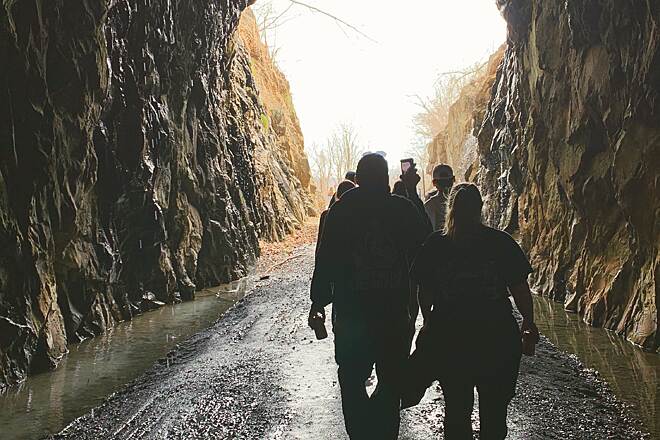 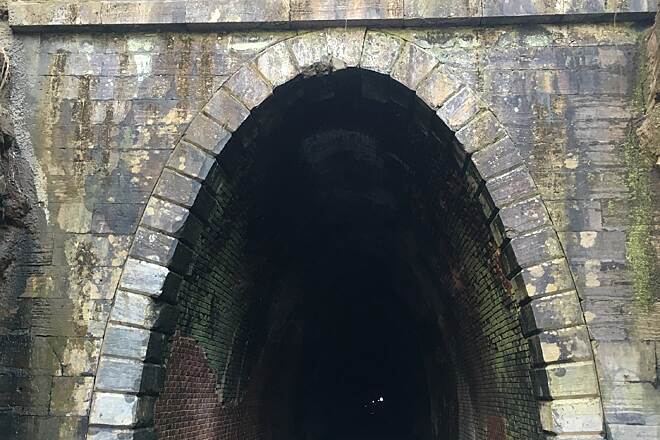 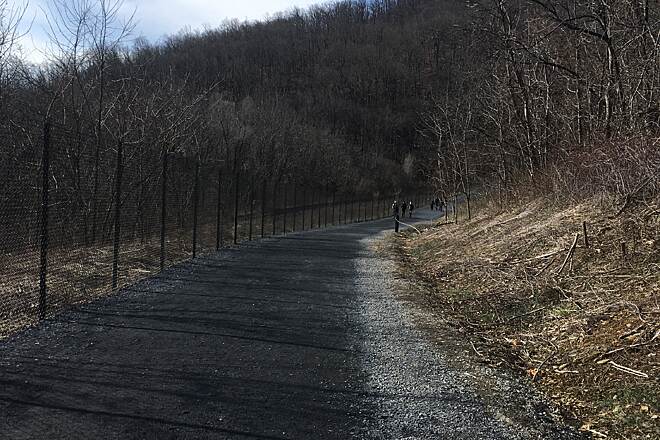 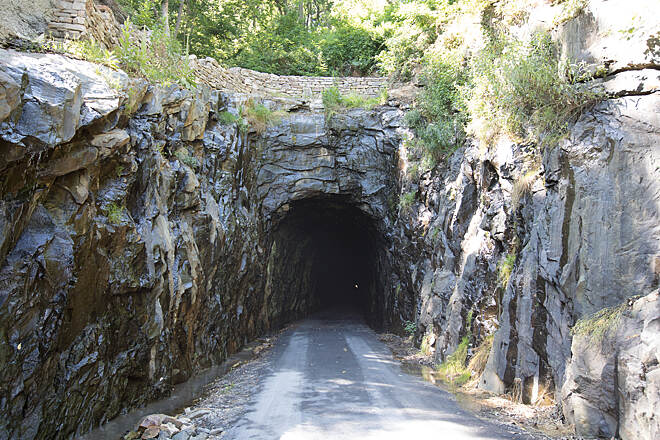 The impressive Blue Ridge Tunnel, nestled in the Blue Ridge Mountains of central Virginia, was designed by French engineer Claudius Crozet to allow the Blue Ridge Railroad to pass through the mountains to reach the Shenandoah Valley.

The tunnel is located below Rockfish Gap, with the community of Afton on its eastern side and the city of Waynesboro near its western end. A 2.3-mile crushed-stone trail leads to the tunnel from both towns, but we recommend that you start in Afton for a more gradual grade.

On the Waynesboro end, the route gets steep, with an average grade of 6.5% and a maximum grade of 19%. Although bikes are permitted on the trail, it’s advisable to walk your bike in the tunnel due to foot traffic and the uneven surface of the tunnel floor.

From the Afton trailhead, it’s a 0.6-mile hike to the eastern portal. The trail parallels active CSX tracks and overlooks Rockfish Valley. Despite the light visible at the end of the tunnel, you should come prepared with a flashlight or headlamp as the tunnel is not lit.

The tunnel itself is stunning. Construction began in 1850 using only hand drills, pickaxes, and black powder. The work, done mostly by Irish laborers and enslaved African Americans, was completed in 1858; you can still see the drill holes in the stone. Stretching nearly a mile, it was the longest tunnel in the country at the time and was designated a National Historic Civil Engineering Landmark in 1976. It was abandoned during World War II when a new tunnel was bored to accommodate larger trains. In 2007, CSX Transportation donated the tunnel and trail right-of-way to Nelson County. The trail and tunnel were opened to the public in 2020. As you walk along the trail, look for interpretive signage that details its storied past.

As you pop out of the tunnel at its western entrance, be sure to note the beautiful elliptical stone portal, which contrasts with the rocky entrance of the eastern portal. Beyond the tunnel, the trail becomes a series of steep switchbacks until it reaches the parking lot at its western terminus in Waynesboro. For an easier walk, you may wish to turn around and head back to Afton after experiencing the tunnel.

There are trailheads at either end of the trail. In Afton, parking can be found at 215 Afton Depot Lane. On the west end, the trail parking is located at 483 Three Notched Highway, Waynesboro. Remember that the hike from the west end is more challenging due to the steeper grades on that end.

Since the trail is quite popular, trail managers recommend visiting during the week in the morning or late afternoon to avoid the crowds. And please respect the private property around the area and only park in designated spots.

My sweetheart and I did this trail today…it was amazing. Nevermind the part where I thought about calling Waynesboro Police to come pick me up on the way back to the car, LMAO! It was time to bond with nature and there were so many lessons. “The light at the end of the tunnel””gotta get up and climb that hill AGAIN!” Tom Petty ¿

Rode this on a BEAUTIFUL Friday afternoon at the start of the Memorial Day Weekend in May 2022. Encountered about a dozen pedestrians in each direction, but my teenage daughter and I were the only ones on bikes. The gravel trail is easy and smooth when starting in the east (Afton) and through the tunnel. Leaving the tunnel on the western side, there are several fairly steep up and down hills before reaching the trail head (our turn around). We walked our bikes uphill for short sections, but more fit / experienced riders would have no difficulty. The downhills were short and thrilling.

The tunnel is why we came here - and is definitely the attraction. BRING A BRIGHT HEADLIGHT / FLASHLIGHT! We each had cheap (dim) camping headlights - but fortunately I also had a small hand-held flashlight in the car, and I held it on the ride. Posted signs recommended 300 lumen lights. From the entrance of the tunnel you can see the "light at the end" - but it is way in the distance, and the tunnel is VERY DARK inside. For spring / summer visitors - bear in mind the temperature in the interior of the tunnel is cooler (about mid 50s to mid 60s year round) compared to the high 70s on our visit day. For biking it was refreshing, but several of the hikers wore jackets. April and May 2022 were pretty rainy - and the east side of the tunnel had a flowing waterfall and standing water (about 6 inches deep) at the tunnel entrance. Based on comments from some of the regulars we met - the tunnel ceiling sometimes drips extensively. This didn't bother us on our bikes.

Kudos to Nelson County Parks and Recreation for several excellent interpretive signs on each end of the route, as well as safety and regulatory signs, including a reminder to bring a flashlight. It was not crowded when we visited, but based on the "NO PARKING" signs on the east trailhead - be advised to ONLY park in the designated parking lot - which appeared to hold about 20 cars. There was a porta-john on the east entrance, otherwise there were no services. We did not explore the west trailhead parking area and entrance, we turned around at the west trailhead sign.

At 4 miles round trip, this isn't going to be a long workout on a bike. The tunnel IS this trail, so come prepared to read the signs, think about its history, and then experience the beautiful setting immediately adjacent to the Blue Ridge Parkway and Rockfish Gap.

Did not enjoy the biking experience.

Trail would be very nice for walking.

My family and I took our Husky with us and all had an enjoyable day. The entire trail is very well maintained. The inside of the tunnel is extremely nice but the sides do tend to get washed out from the water. Be sure to stay close to the center to avoid slipping and falling. We took headlamps and it made the trek easy.

This is a relatively easy trail for all ages and abilities. West side from parking to entrance is more difficult but east side has very little grade to entrance. As others mentioned, parking is limited, but hikers are coming out regularly so it’s not much to wait for a space. We were there on Sunday afternoon and waited just 10 minutes for a parking space. Great family activity.

A fun and unique trail

The tunnel requires a light of some sort because while you can see the end, you are walking for about .84 miles in darkness. The flashlight is a nice addition to the hike, though, as you are able to see the differences in the tunnel as you progress from one end to the other. The parking lots on both the east and west end of the trail are small, but the west end does offer more room. It is also a steeper trail so keep that in mind; you will need to all back up unless someone meets you on the other side.

First... let me say I was nervous about the tunnel! But know that you can see “the light at the end of the tunnel” so I wasn’t claustrophobic,as I had feared. Know that they mean it when they say lights are required. Otherwise, you are not visible to other hikers even when you’re within arms length! We began at the Afton end and although we arrived before 10am all parking was taken. We ended up parking at the post office. As you exit the tunnel on the Waynesboro end there is a good uphill hike...a very distinct path/trail. The entire path is 2.5 one way. We saw plenty of dogs on the trail which was another question I had... we’re dogs allowed? As an added bonus it snowed! We saw

While this trail is good, you better get there early. Parking is incredibly limited and if you park out of the marked area, your car will get towed. Rude people abound.... Once in the tunnel, it is FULL of people with all manner of lights and kids shining flashlights in peoples eyes. There are better trails without the parking and crowd hassles.

Nicely maintained trail. The west side is a little steep. The actual tunnel is flat. Make sure to have a flashlight as it is pitch black in the tunnel. It’s a beautiful area and neat experience. Lots of history!

On my bucket list. 50 degree year round. Bring a light. Dark inside