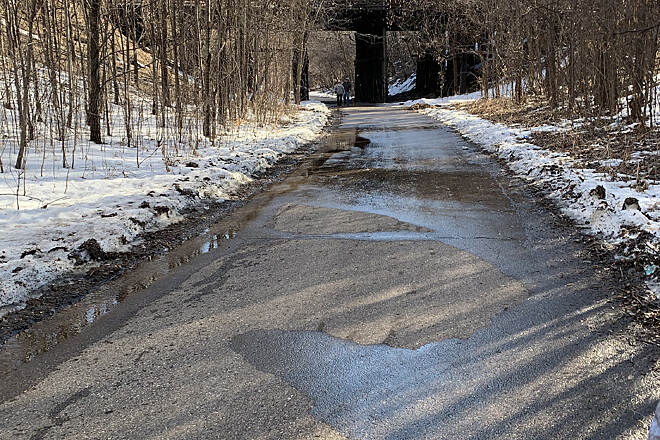 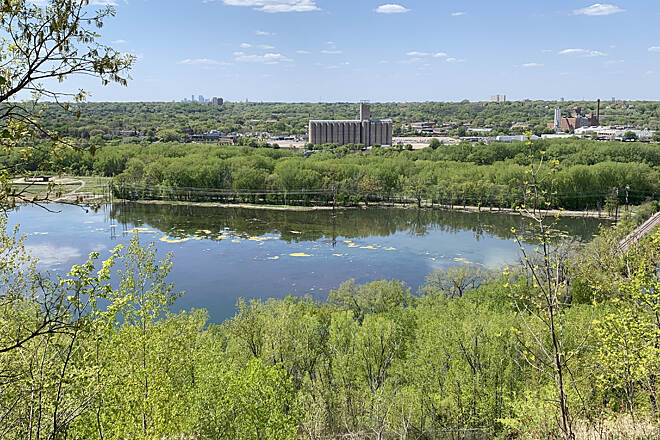 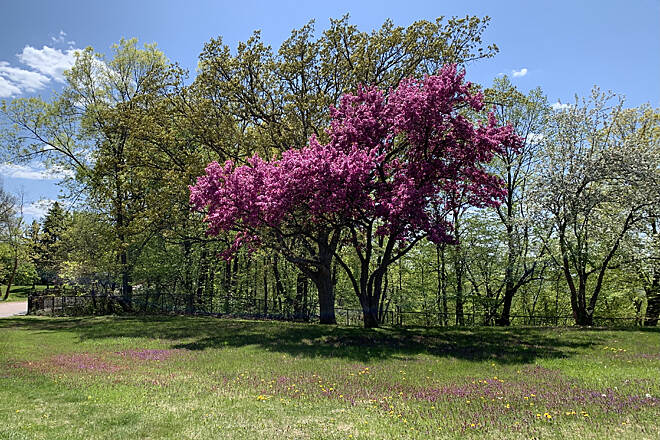 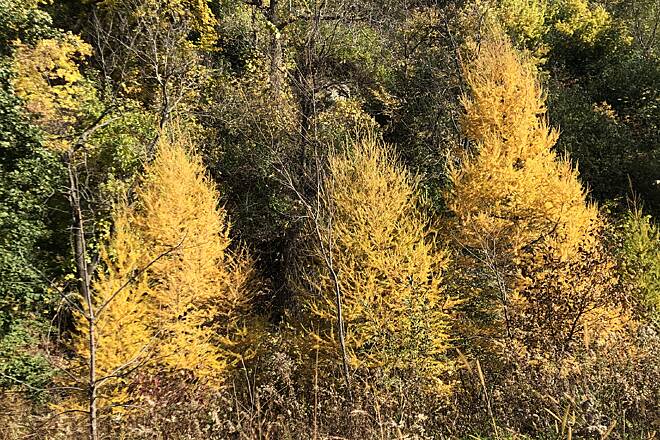 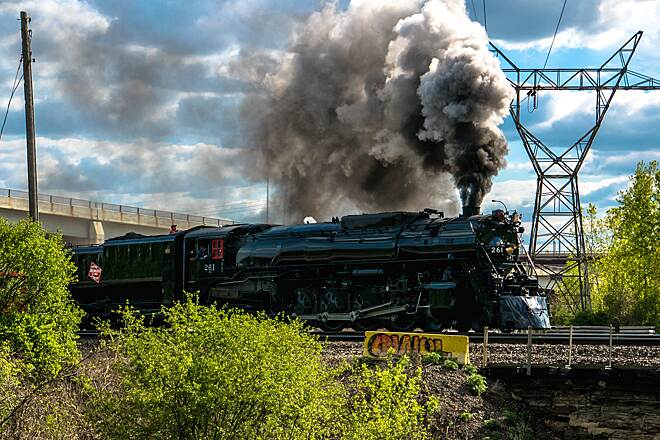 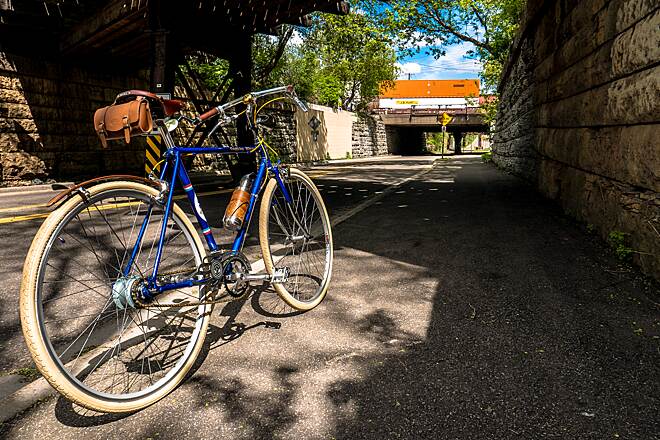 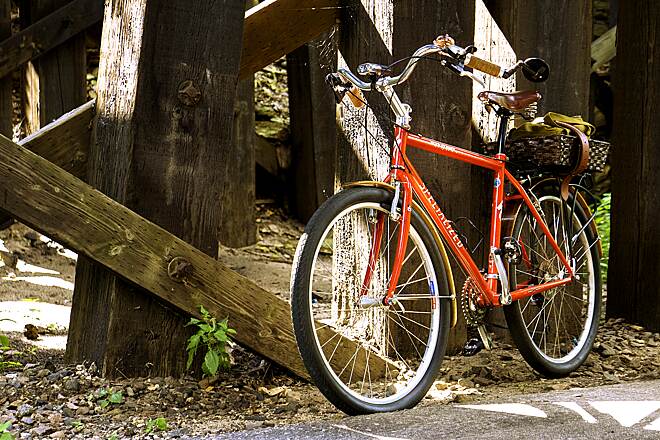 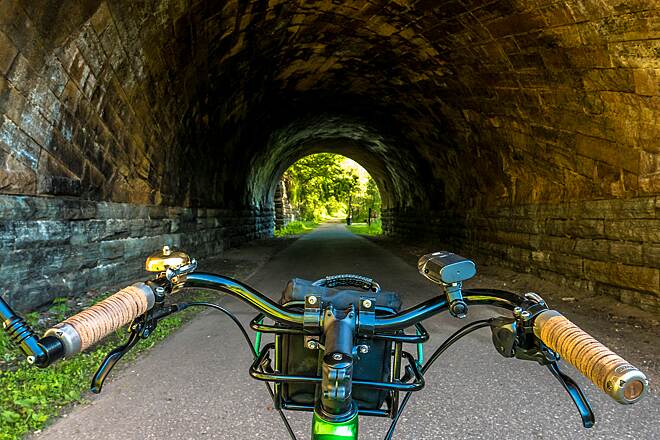 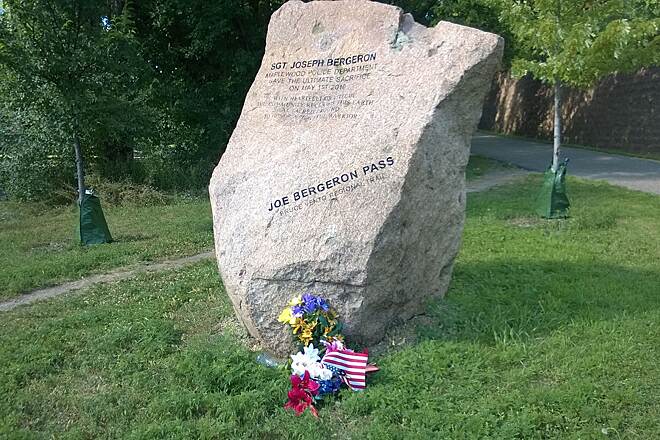 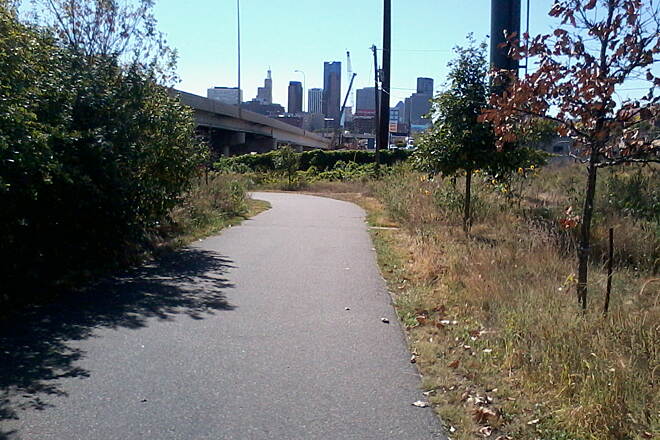 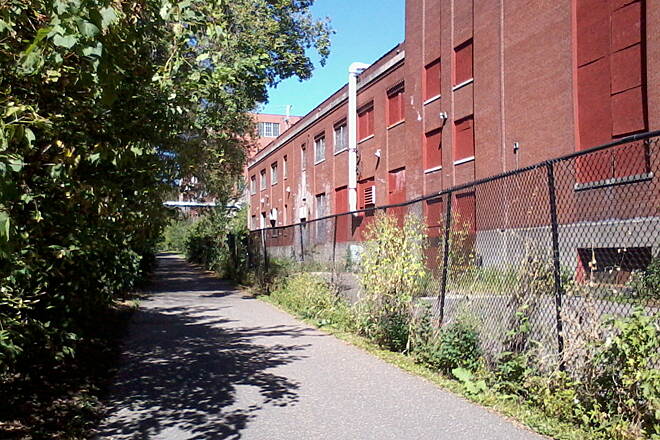 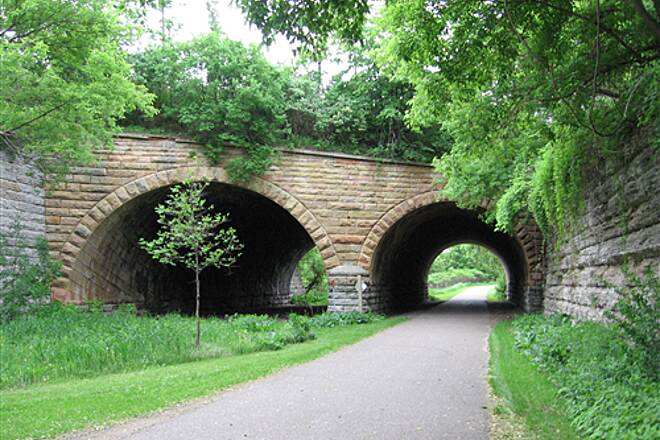 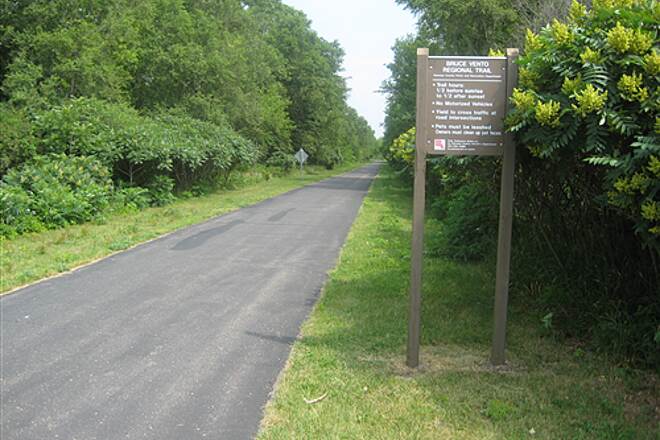 The trail is named in honor of Bruce Frank Vento, a member of the U.S. House of Representatives from 1977 until his death in 2000, representing Minnesota’s fourth congressional district. Vento is recognized for his efforts to clean up the environment.

The regional trail links the White Bear Lake area with the Bruce Vento Nature Sanctuary on the eastern edge of downtown Saint Paul, near the Mississippi River at the intersection of Commercial St and E. 4th St. Starting at the nature sanctuary, the trail heads north and immediately passes through the stone arches of the bridge known as the Seventh Street Improvement Arches. Built in 1884, it is considered one of the most important feats of engineering in Minnesota history and one of the few examples of this style of construction in the United States—not to mention the only one of its type in Minnesota. Locally quarried limestone was used for most of the stonework: The wing walls and abutments were carved from Saint Paul gray limestone, and buff--colored Kasota limestone came from quarries in the Minnesota River Valley.

The trail then meanders northward within the scenic ravine that cuts through Swede Hollow Park, passing an industrial area before circling around and through Eastside Heritage Park. From this point northward, the trail continues through a decidedly urban setting. The route follows close to the east side of Lake Phalen, but instead of staying right along the lake on East Shore Drive, it veers away from the lake along a tree-lined corridor. For an open, direct view of the lake, trail users can jump on the Lake Phalen trail and reconnect with the Vento Trail by turning east on Arlington Avenue and accessing the trail at North English Street. From there, you’ll wind through a wooded corridor between neighborhood backyards as you make your way toward White Bear Lake.

About 0.75 mile south of MN 36, the trail intersects with the Gateway State Trail, whose northeast segment continues on to its trailhead north of Still-water. While this section is predominantly residential, the Vento Trail does pass through a few neighborhood parks and open spaces as it gets farther north.

The trail drops down along the street soon after crossing Beam Avenue at County Road D, where it then winds along the sidewalk for a short distance before resuming along a corridor that ends unglamorously at Buerkle Road, just north of I-694.

For access to the southern trailhead, take I-94 to Exit 243 for Mounds Blvd. Head north on Mounds Blvd., and take the first left onto Seventh St. E. The parking lot for the Bruce Vento Nature Sanctuary is one block west, on the south side of the street at Payne Ave.

There is no designated north trailhead at Buerkle Road.

straight and wide. it ends up by kwik trip on the north end which is good and on us 61 which sucks. other reviews say the trail is smooth. it is not. st paul trails are generally poorly cared for. the cracks are occasionally filled with tar but not filler so the bumps remain. contacting the city is worthless. they simply reply that your email has been forwarded to the responsible department.

North of the Mississippi River (it flows EW through downtown St. Paul) the Vento Trail follows an old Phalen Creek railroad to Phalen Lake. South of the river the trail shown on TrailLink as the Cherokee Trail is also signed as part of the Bruce Vento Trail.

This was a great trail and like other reviews stated there is one stretch of it that isn’t great, but doesn’t last long. I would personally start at Lake Phalen and ride north to the end instead of starting in St Paul.

I’ve ridden this trail a few times now. It’s really nice, with smooth surfaces and pretty scenery, including Swede Hollow and the Hamm’s brewery. It’s easily accessible. Definitely a trail to check out.

The Bruce Veto trail is always a wonderful ride, but once the EXPRESS BUS LINE (from WBL to downtown St. Paul) is built on the trail it will die. Who wants to ride next to huge stinking diesel busses? Not Me! Don't build on our trail.

This is a beautiful paved trail that rides through the woods. Not difficult as it's mostly all flat. This trail is not very busy. It's never crowded. Quiet, peaceful.

This is a mostly straight, flat trail that runs north from St Paul thru its northern suburbs. Mix of woods, fields, and houses for scenery. Lots of flowers, trees, etc. The trail runs directly next to Lake Phalen, which has a very scenic loop trail around it. Highly recommended for some nice relaxation in the St Paul area. It's nothing super-fancy; but is just a nice solid suburban trail in very good condition.

The trail has been extended on the north end as far as Buerkle Road in White Bear Lake and will be extended on the south end into the Bruce Vento Sanctuary by year's end.

"This trail has been renamed the Bruce Vento Trail in honor of the late enviromentalist Congressman. Starting from a parking lot at East 7th Street and Payne Avenue, the trail goes under a stone arch bridge with an unusual spiral-patterned stonework. Here it goes through Swede Hollow -- an historic area once occupied by succeeding groups of immigrants. It then passes by the old Hamm's Brewery.

Next comes an industrial area (some of the 3M Companies' earlier plants) before curving north to pass by Lake Phalen. Here the trail crosses the Gateway State Trail. The trail then continues through suburban Maplewood before ending at St. John's Hospital.

There are hopes of continuing the trail north from here through White Bear Lake all the way to the Anoka County line."